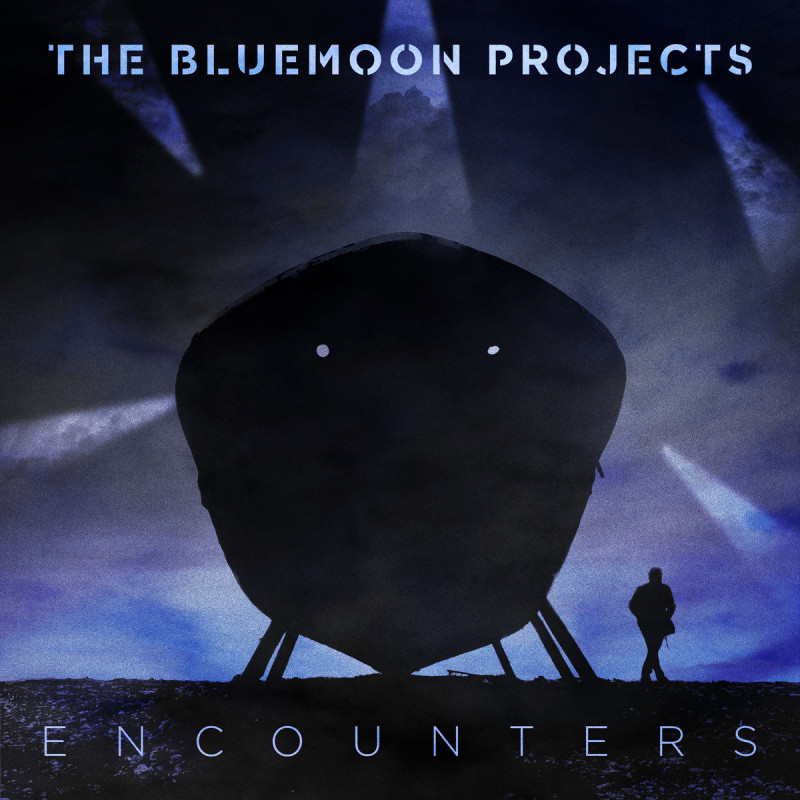 Space is infinitely diverse and deep. Inarguably so. And we earthlings should accept that despite all of our technological growth, we are still very limited in our capabilities of space exploration. Ironically, maybe that is one of the reasons that space-rock is a genre with quite firm set of rules. In the same way that you cannot build a spaceship from clay and wood, you cannot play space rock without samples, chugging 2/4 riffs and delay effects.

The BlueMoon Projects however do offer some diversion when presenting their approach to space-prog. While classic Hawkwind tells tales about space travel in terms of the Golden Era of sci-fi, and Ozric Tentacles use psychedelic effects, Jah and Castaneda to get to outer reaches of Milky Way, The BlueMoon Projects offer a very hip approach to space travel. Douglas Adams, for instance?

With Encounters these Greek astronomers make their debut and add yet more interest to the rapidly growing prog scene in the land of olives. The music here is a nice mixture of ambient music, indie pop and space-rock (not the “dirty” stoner / Hawkwind type, rather something from the likes of Maserati). The indie-pop fits surprisingly well into the picture.

The voyage on this album is not long enough to get space tourists bored, only 50 minutes, with enough diversity to spend the entire trip marvelling at cosmic pictures. The first two tracks are both very “intro-sounding”, to the point when maybe one of those could be omitted without losing anything essential. However, the third track Alien Talking is the pinnacle of the disk and probably one of the best space-rock compositions I have heard in a while, with an excellent main theme (that's a Telecaster right?), a groovy bass and some sound effects. At times, it even reminds me of Porcupine Tree's Signify. That is a comparison that I am sticking to even more closely, when listening to the fourth track, an Anubis, Wilson-esque ballad Dress Like Me. Everyone who thought that PT had gone the wrong way after doing Stupid Dream and The Lightbulb Sun, should check TBP and rejoice.

Eden is an oddball track here, tearing itself apart between its sinister first minutes and the calmer coda, while the next one T-Minus travels back from dreamy haze to a groove rock section that ends the track (this one especially reminds me of Maserati). Hypersleep is yet another “Ground-control-to-Major-Tom” attempt at bringing sorrowful melodies through starry atmospheres. Infected closes the album with a soft, melancholic pop-rock instrumental.

For a debut record this is a very nice statement from the Greek crew, who know their aims and destinations well. I hope their lucky stars will bring more music in future to this tiny planet. 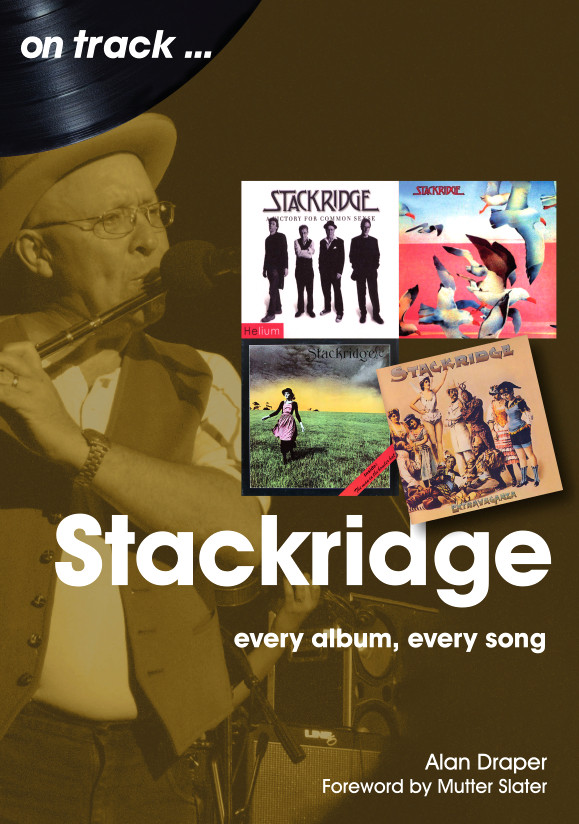 On Sunday 26 August 1973, the final day of the Reading 12th National Jazz, Blues and Rock Festival, your reviewer (still in his teens) trudged his way to a field by the River Thames along with 25,000 other die-hard rock fans. The main attraction was headliner Genesis but two other bands made their mark that day.

The first was Ange who entertained the early afternoon crowd with a winning formula of Gallic theatrics and symphonic bombast. If they remain the quintessential French prog band, then Stackridge, who took to the stage later that afternoon, are English with a capital 'E'. They, too, wowed the Genesis faithful with a performance that juxtaposed tuneful songs, with a Monty Pythonesque slapstick involving metal dustbin lids no less (this was long before plastic wheelie bins populated the urban landscape).

To my knowledge, this is the first ever book dedicated to Stackridge, who formed in the south-west of England in 1969. Like many bands, they endured the usual line-up disruptions and released five albums before calling it a day in 1976. They reformed in 1999 and released further albums before hanging up the dustbin lids for probably the last time in 2015. Author Alan Draper has been a Stackridge fan since 1972 and he analyses their complete output including radio sessions, live recordings, compilations and the band's various offshoots, most notably The Korgis who enjoyed hit singles in 1979 and 1980.

It goes without saying that this book is a must for Stackridge fans, but it should also pique the interest of anyone that remembers the classic era of progressive rock with affection, even if, like me, you let this band's recorded output pass you by.

In addition to being a writer, Draper is a musically-literate song-writer and musician. This is evident in his extremely detailed track descriptions. The Stackridge discography may be slim, compared with many bands active since the late 1960s, but at 200 pages this is the longest book from Sonicbond I've read thus far. It's also one of the most entertaining.

(Editor's note: I too have never knowingly encountered anything from the Stackridge discography. In selecting a video to accompany this review, I saw a song that piqued my interest. I was born 10 miles away from Yatton and for many years my grandfather worked at the village railway station. So the video has to be this song entitled Purple Spaceships Over Yatton.) 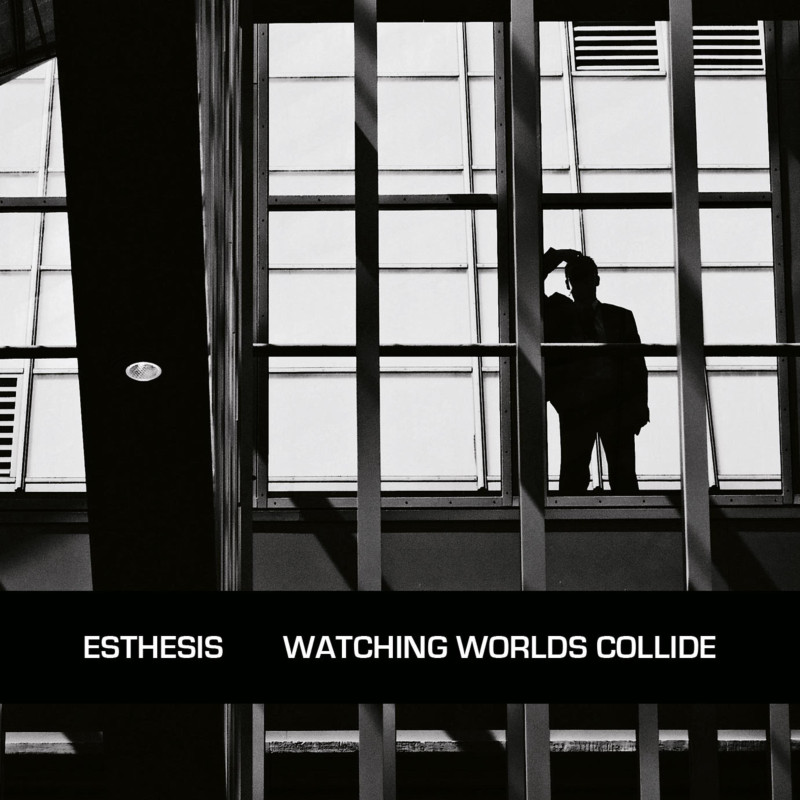 Esthesis' second full-length studio album, Watching Worlds Collide, is their follow-up their debut 2020 release The Awakening. Esthesis are led by keyboard player and vocalist Aurelien Goude, who is also responsible for the compositions, production and the cover art, as well as playing other instrumentation, such as lap steel guitar, guitar, harmonica, and various bits of programming. He is joined by long-term members Baptiste Desmares (lead guitar) and Marc Anguill (bass) and new drummer Arnaud Nicolau.

Esthesis' music is a mix of keyboard-filled prog-rock, jazz, rhythm and blues, and a dose of art-rock. A judicious use of guest musicians broadens and deepens the sound pallet, with a horn section, violin, and electric banjo! The music they produce has a kinship with the style of bands found on the K-Scope roster such as Anathema, The Pineapple Thief and Gazpacho as well as on occasion, mid-period Porcupine Tree (The Sky Moves Sideways through to Lightbulb Sun). There is also the introspective melancholy of No-Man and Tim Bowness filtering through.

The seven tracks on Watching Worlds Collide have similar tempos and Goude's vocals are non-showy, like a slightly underpowered Aviv Geffen (Blackfield). So the music must do the heavy lifting. This is done through the clever arrangements (by the group) and deployment of the extra colours available from the guests, as well as through the keyboards, guitars and bass. 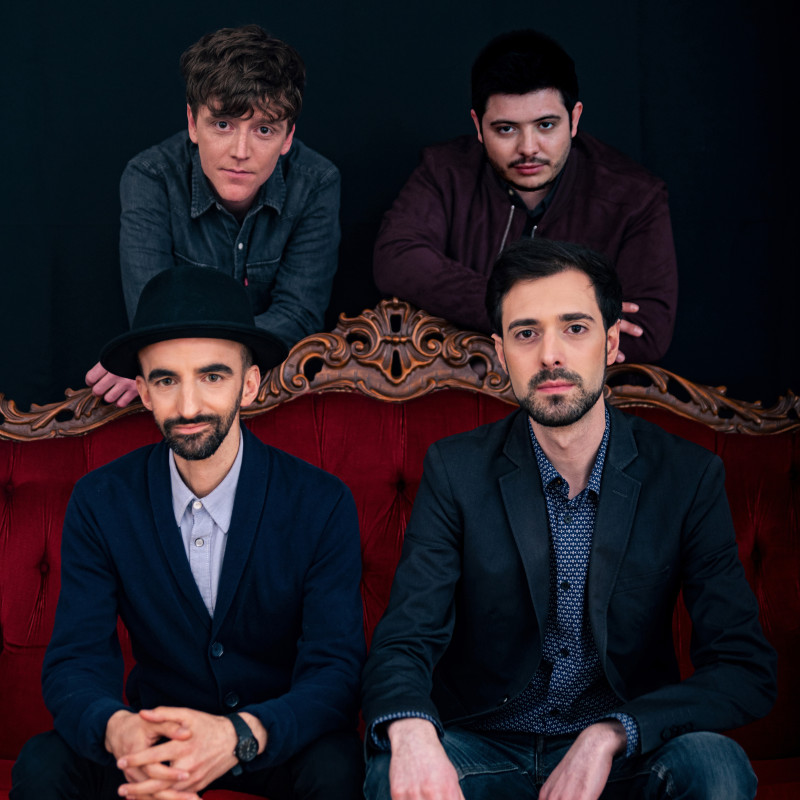 The album starts with the atmospheric keys of Amber before it livens-up with the full band coming in. Piano leads the melody, as it often does on this album. Synths and guitar solos battle it out on this satisfying opener.

Place Your Bets has a mid-paced, ballad-like structure before it does the Porcupine Tree thing of dropping in heavier chords. The sax solo is good, as are the synth and guitar solos, but I find the material itself heading towards the bland.

Prominent bass, piano and whistling set up the slow Skimming Stones which is saved from more creeping blandness by Mathieu Vilbert's stark violin solo. This tendency to a pleasant but bland melodicism continues through quite a bit of this album. The R&B beat of Wandering Cloud is saved by lap steel and the horn section. The long 57th Street fails to engage me in any meaningful way; it's all a bit polite.

Better is the instrumental jazz fusion of Vertigo where its funky bass, wah-wah guitar and Hammond organ give it an early 70s vibe. The heavier guitar and a horn section also get crammed into an eventful five minutes. Jazzy drums and intense Hammond drive the best track and closer Through My Lens. It has a flowing sax solo, and the guitar solo finally provides some grit.

Though somewhat better on repeat plays, Esthesis' Watching Worlds Collide still struggles to hold my interest. Nothing ever drives through, and it remains a bit inoffensive and polite. The grit that is there, is not enough to get the pearl started. 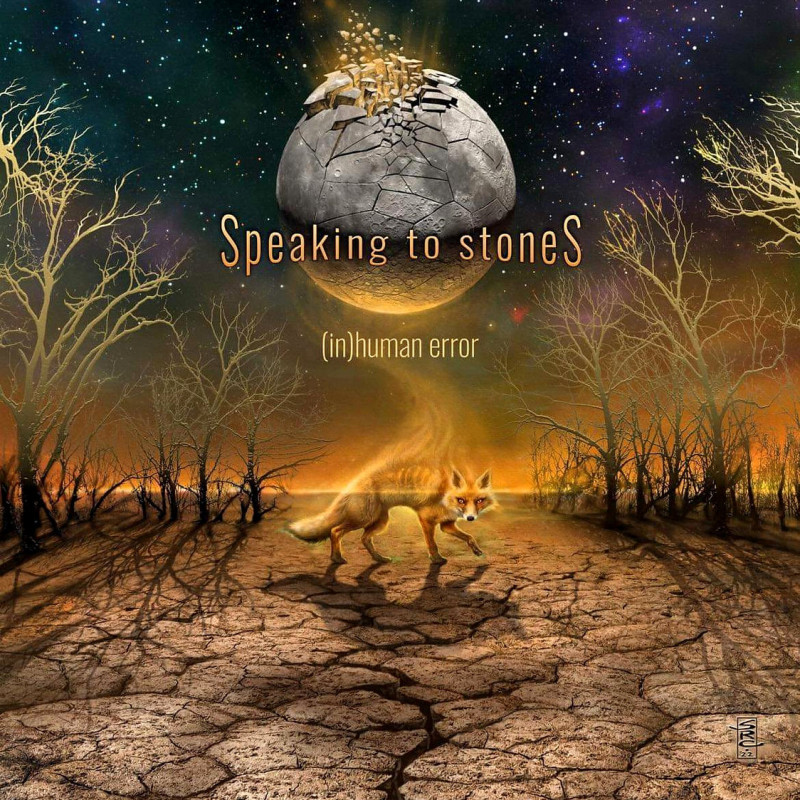 There have been a few pleasant surprises from old acquaintances in the prog-metal world this year. The re-emergence of this American band/project, after a 10-year silence, was one of the biggest. I had long since confined their career to the history books.

When I was asked to compile a feature on my favourite prog-metal albums of the 2010s, this band's second album from 2012, Elements, was one of the first onto the list.

Speaking To Stones is based around multi-instrumentalist Tony Vinci. This time he has recruited drummer Mike Malyan (Monuments, Disperse) and vocalist Maxi Curnow with the aim of delivering a more modern metal sound. Curnow is the third singer to feature in the band's three-album discography.

Lyrically Tony describes this as "a personal journey through the beauty and disappointment of trying to make change in our too broken world."

The key to enjoying this album is to accept that this is not a re-write of Elements, which was taken to another level by the vocals by Anders Engberg. He is one of my favourite singers, and the new man behind the microphone is an entirely different proposition. Maxi Cornow has the sort of clean voice that many modern metal/djent bands prefer. Not in the sickly-sweet pop-style of some, but his vocal melodies and phrasing lend a very modern-metal approach to the music here.

As before it's the guitar that dominates the eight new songs. The riffing is aggressive and the soloing in-yer-face, but never over-long. I really enjoy Vinci's playing. The lack of a keyboard and bass player reduces the sound palette. Bits of keys and piano do peep out here and there, as on The Drowned and the Saved, but overall I find I am missing the interplay between guitar and keys that was one of the dominant 'elements' of the last album (listen to the opening of Wind).

Song-wise, some of the tracks work for me better than others. Gravity, with its syncopated rhythms and clear melody, and Echoes, with its cool opening alt-rock riff, are my two favourites. Ghosts and The Last Word don't work for me at all.

I'd like the production to have placed the vocals consistently forward in the mix. They frequently sound too distant and thus weak. Despite its strong hook, I'll Be Your Ocean is ruined by the barely audible vocals. Also there is some heavy distortion whenever the drums and guitar dominate the lower registers, which spoils my enjoyment in places. (I am reviewing this from my own copy of the CD played on my full system). The routes selected for the drums, guitar and vocals do not always seem to align.

Overall, for anyone who enjoys the traditional style of prog-metal with a heavy and modern-leaning sound, must certainly give this a go. It has been great to hear some new music from this underrated band/project.

The CD has been released on different labels in north America (Animated Insanity) and in Europe (No Dust Records, Netherlands). The page links can be found above, as can the streaming pages for the full album on Spotify and YouTube.