Flash — In The USA 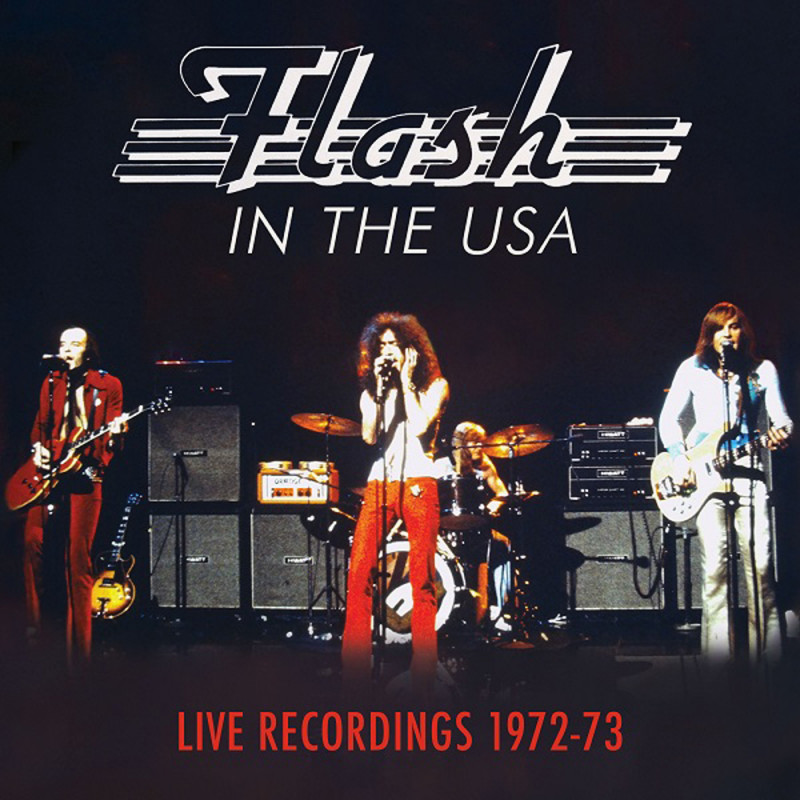 Flash were, almost literally, somewhat of a flash in the pan, lasting just two years between November 1971 and November 1973. During that period they recorded three albums with diminishing returns. Seemingly wanting a shortcut to the big time, they tended to eschew the European markets and focused their attentions on cracking the USA. Incredibly they played almost 120 concerts over a period of 14 months on three separate US tours supporting an astounding variety of different artists ranging from T.Rex to Black Sabbath, as well as innumerable headlining club dates. This triple CD package compiles the best recordings available from those tours.

The first thing to say is that this is a really impressive package, with a sumptuous 32-page booklet with new interviews with band members and excerpts from contemporary interviews with the sadly deceased Peter Banks. With lots of photos, many previously unseen, as well as pictures of memorabilia and press clippings this is a lovingly assembled set.

However, the caveat is that, as clearly written on the back of the booklet, the majority of the recordings are sourced from fan-made audience recordings. Neither of the two off-air recordings are exactly hi-fidelity, sourced from circulating recordings and therefore likely to be multiple-generation distant from the source. So anyone expecting pristine quality recordings should look away now.

First-off, don't even bother with Children Of The Universe and Black And White from the 1973 Miami concert on CD 3, as they are virtually unlistenable; absolutely no high-end, just a thick muddy mess that most sane people would throw away even if it was given to them free on a plate. The following two tracks, The Bishop and Manhattan Morning (Christmas '72), from Cape Cod are marginally better, in that at least you can hear all the instruments. However, the bottom-end rather dominates, and overall the whole thing sounds like it was recorded from outside the actual venue.

The final 1973 recordings are from an off-air television broadcast (The Midnight Special) with the band introduced by none other than Jerry Lee Lewis. In comparison with the other 1973 recordings, these two tracks sound gloriously clean. That doesn't mean that they are anything special though and still suffer from a lack of sparkle and clarity.

In the sleeve notes, singer Colin Carter states there was no audience, so the audience applause was presumably dubbed on in post-production. That is probably why both sets of applause sound remarkably similar. These two tracks were previously released on the album Psychosync. The remaining tracks on CD 3, from the December 1972 tour are previously uncirculated and make their first public appearance here. There is an obvious reason why they have not been previously circulated, which is probably all I need to say.

The first four tracks on CD 2 are the second off-air recordings, this time from a radio session recorded at Ultrasonic Studios in July 1972. Easily the best recordings of the set, they have been previously released, along with the Midnight Special recordings, on the out of print Psychobabble CD. Considering it was only their second US concert, the band are remarkably fluid and pretty tight. The recording is mentioned as having been restored and I have to say the sound is much improved over what I remember from the original Psychobabble CD that I used to own but sold as the quality was quite naff. These versions are clear, with a decent balance, and I am sure that if they had appeared like this on the Psychobabble release I would have held on to it. Undoubtedly the best that you are likely to hear Flash with Peter Banks.

Unfortunately the quality drops quite remarkably for the New Jersey recordings of December 1972 that make up the rest of this CD. Given that both Small Beginnings and Children Of The Universe are included in the superior Ultrasonic studios set, it is a mystery why anyone would want three, in the case of the former track, and four, in the case of the latter, greatly inferior quality versions as well. But at least this trio of tracks is listenable and provide probably the second-best version of Black And White on the set.

As I seem to have reviewed the CDs in reverse, we finally come to CD 1, all taken from the 18th date on the first US tour, at My Father's Place in Roslyn, New York on the 1 August 1972. Very much of a bootleg-quality that back when one was a teenager would have been considered to be exceptionally good. Nonetheless, bootleg quality it remains, but it is listenable and during the quieter sections is quite decent. Things do get overloaded when the band go into full flight. And plaudits to the writer of the sleeve notes who was obviously in a very optimistic frame of mind when he wrote: "The crowd chatters while Banks and co. shred their way through their set, which adds to the atmosphere". There are other, less polite ways of describing their intrusions!

Really this is only one for hardcore fans and completists. For those that fall into either of those categories, is it worth updating the old Pyschosynch CD with the new versions contained in this set? Difficult one, but on the balance given the perceived improvement in quality (based on my potentially infallible recollections) and the quality of the booklet and packaging I would say yes. Who knows, you may find the other recordings offer something extra, although definitely skip those two tracks from Miami.

Well I guess someone had to do it eventually. For those who might recall much of the fire and brimstone that was evident during the band's short career, their live shows were supposed to be highly indicative of their abilities. Not that they ever toured Down Under as far as I can recall. With a strong similarity to bands like Yes and with Peter Banks who served a short time for that band, it stands to reason that much of the songwriting contains many complex time signatures and difficult arrangements. While Yes had the formula down pat pretty well by their third album, Flash were all but washed up after their third studio effort, as they abandoned ship in 1973 only to reform again officially in 2010.

This 3CD set is a collection of live music recorded during their 1972 tour of the states, and while it includes performances from seven different concerts, some songs that are repeated (see track listing above), do sound a little different from the other. Whether that is a good thing will obviously come down to personal preferences. The set does contain a 32-page booklet which includes some unique photos, band interviews and touring information. However, when you consider the collection includes five versions of Children Of The Universe and four versions of Black And White , it wears out its welcome pretty quickly.

I understand from various pieces of promotional information, the concept here was to obtain whatever live material was available, irrespective of source or quality, put them all in the improvement blender, spit them out at the other end and see what type of result could be possible. While I am sure that much effort was needed to improve the quality of the sound as best as possible, in all honesty, much of it sounds as if it originated from cassettes or at best was of bootleg quality. In some sections, it sounds as rough as the northern end of a south facing pineapple, although there are other examples where the quality does improve considerably. Perhaps some material was derived from the desk itself. Who knows?

Although I owned the three of the band's records during the 70s, I tended to bypass much of their music as I only played them occasionally, preferring music from the first tier. It wasn't until some time later that I began exploring much of the other brilliant second tier material that would circulate around the world and find its way to Australia. By that I include bands such as Druid, Fruup, Starcastle, England, Mirthrandir, Ethos, Fireballet, Be Bop Deluxe and others. Flash's music could be seen to follow some of those bands in a vague sort of style but holistically, they were pretty much on their own with a few obscure references surfacing only now and then.

I accept and appreciate the concept of releasing live music like this, as much of it would have been unlikely to have seen the light of day before now, so kudos to all involved in putting this sizeable package together. It is probably for completists mainly, but for my own purposes, I will still give the studio albums a spin from time to time for nostalgia's sake as they sound so much cleaner. The music generally sounds pretty good with only the odd clanger from the vocals when Colin Carter sounds slightly flat in some sections. The quality of the MP3 songs at only 160 kps which were sent to me for review also didn't help matters much, so I hope the quality on the CD is much improved. Overall it's a pretty decent offering even if there is a lot of repetition with the song selection. Maybe a two CD set might have been enough?