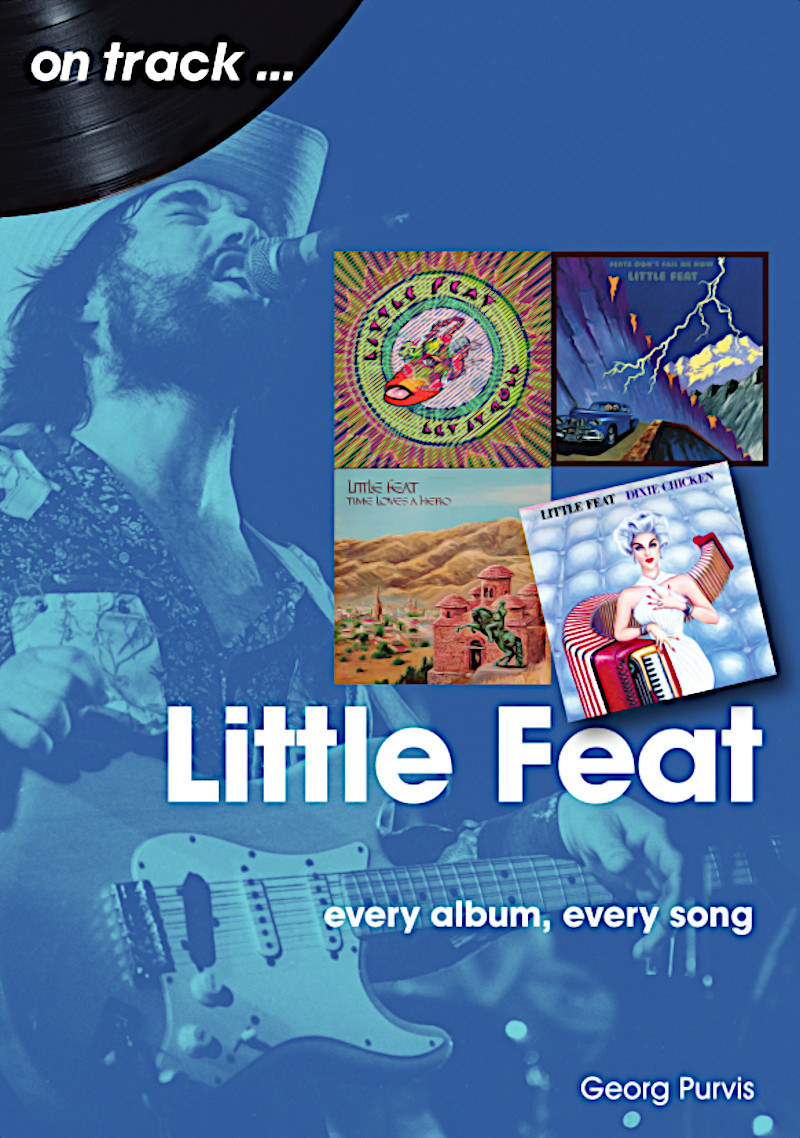 I know, I know, and I agree Little Feat are not a prog band, not even close. They are a weird country-blues band who I saw supporting The Who at a rainy, open air gig at Charlton Athletic's football ground The Valley in London, on the 31st of May, 1976. Handily there is a Youtube video of the gig (see below), which unfortunately only consists of still photos, so don't bother searching for the 18-year-old me in the crowd. I tried and failed. But the recorded sound is great, and well worth a listen.

It is as a live act that I most connected with Little Feat, falling for their slide guitar-driven sound. So, one of the reasons I wanted to review this book was to get a handle on their studio output, only having three albums out of the 19.

And what a good read it is. Georg Purvis has written before for Sonicbond's series of books. He is author of Queen: The Complete Works, Decades: Pink Floyd In The 1970s and On Track - Elvis Costello And The Attractions. Here, his liking for Little Feat does not overshadow their sometimes-odd choices of recordings. He is especially critical of their habit, when Lowell George was leading the band, of re-recording songs from previous albums onto the new ones. He also has a pithy put-down for songs he considers substandard.

The most interesting parts of this book for me are his reviews of Little Feat's releases after the death of Lowell George. The band have released more albums since that sad event, than they did when he was alive. I was unaware of just how many. As with many of these books, they are short on biographical detail, but Purvis does point the curious to a definitive band biography. This lack is made up for by the quality of the song analysis and Purvis' breadth of knowledge. He even digs out obscure tracks, lost on even obscurer movie soundtracks.

As with many of the On Track books this would benefit by having a song index, so a compare and contrast can be done easily between different versions of the same songs. However, as it stands, this is a fine read, well written and engaging. A must for Little Feat fans and those wanting to expand their knowledge. 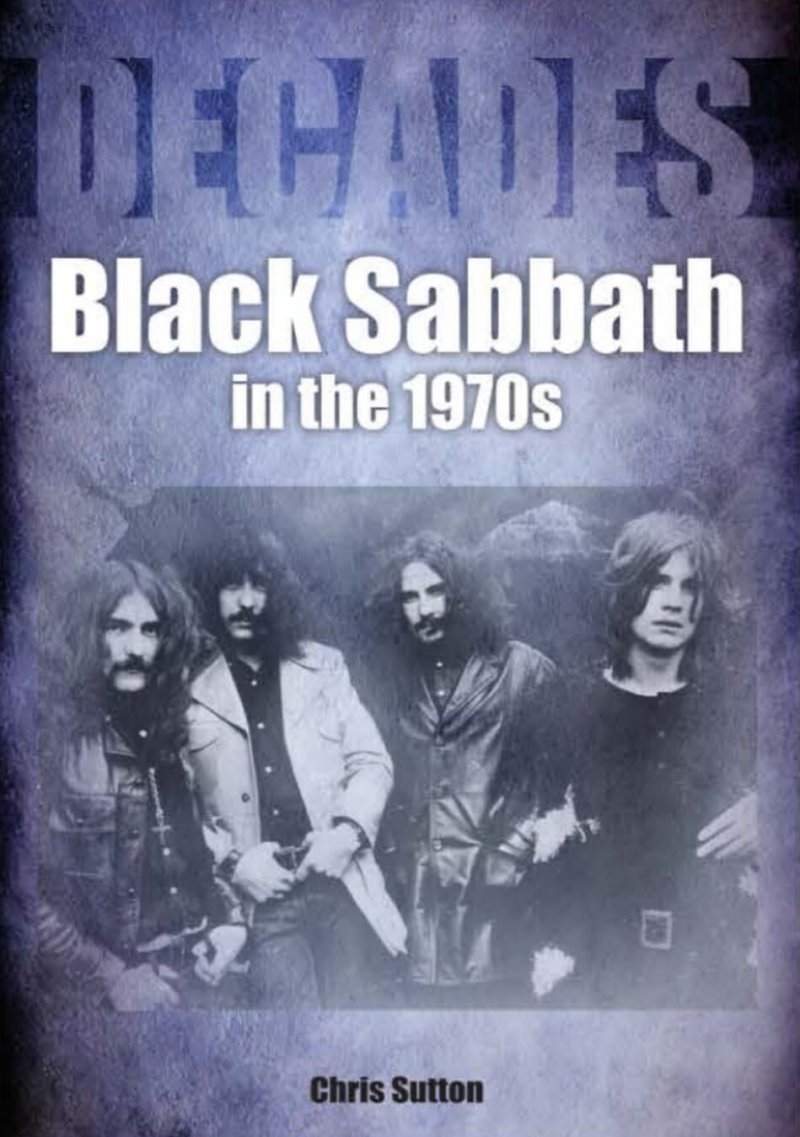 Some bands seem to have managed their careers to fit perfectly into Decades, the fledgling series of books as a spin-off from Sonicbond's popular On Track series.

Thus, for long-time fans or for the curious seeking everything that they need to know about the Ozzy years, Black Sabbath In The 1970s is able to recount (almost) the full story in one decade. (Four decades later, Ozzy, Iommi and Butler would reform for the album 13. The four original members also recorded the live album Reunion released in 1998.)

The downside of covering one of the biggest-ever metal bands, is that there are already many excellent books telling the full Sabbath tale from many perspectives, as well as thousands of interviews and videos featuring the four members and everyone-and-their-dog associated with their career.

Without any fresh input from the four key musicians, the author Chris Sutton borrows heavily from previously published material. There are some fresh interviews with people such as keyboardist Rick Wakeman and engineers Mike Butcher and Robin Black. These add some interesting touches here and there; as does the use of rarely-seen images from Sutton's own personal collection. However those who already have the biographies such as Iron Man and I Am Ozzy or the does-what-it-says-on-the-tin The Complete History Of Black Sabbath, may find this book covers already-familiar territory.

However, Sutton is a good writer who is able to present the action-packed decade in a very readable and concise way. The story flows freely from beginning to end, with exactly the right level of detail to have kept me engaged, without becoming too geeky.

As usual every track is covered in some detail, offering some worthwhile insights into specific songs. I have three of these albums, and enjoyed listening back to them whilst reading Sutton's observations. Next time I am at a record fair I shall probably pick up the other five and do the same.

For those unfamiliar with the story of Sabbath's early years and/or for anyone wanting a bit of help in exploring their early albums, this is a very comprehensive and reader-friendly guide. I am pleased that Sutton consistently acknowledges Sabbath's role in setting the foundations not only for 'heavy metal' but also their role in the evolution of 'progressive metal'. Back then their use of keyboards within a guitar-bass-drum formation was an exception and the albums Sabotage and Sabbath Bloody Sabbath especially broke new sonic ground in many ways. I include below an amazing live clip from what must have been one for the first-ever performances of War Pigs. This was so far ahead of its time, I had to check that the date was correct!

Another six Sabbath albums came in the 80s, so a second book on the band could fit into this format. Although with the constant changeover of musicians during that decade, the author will have a considerably more difficult task! 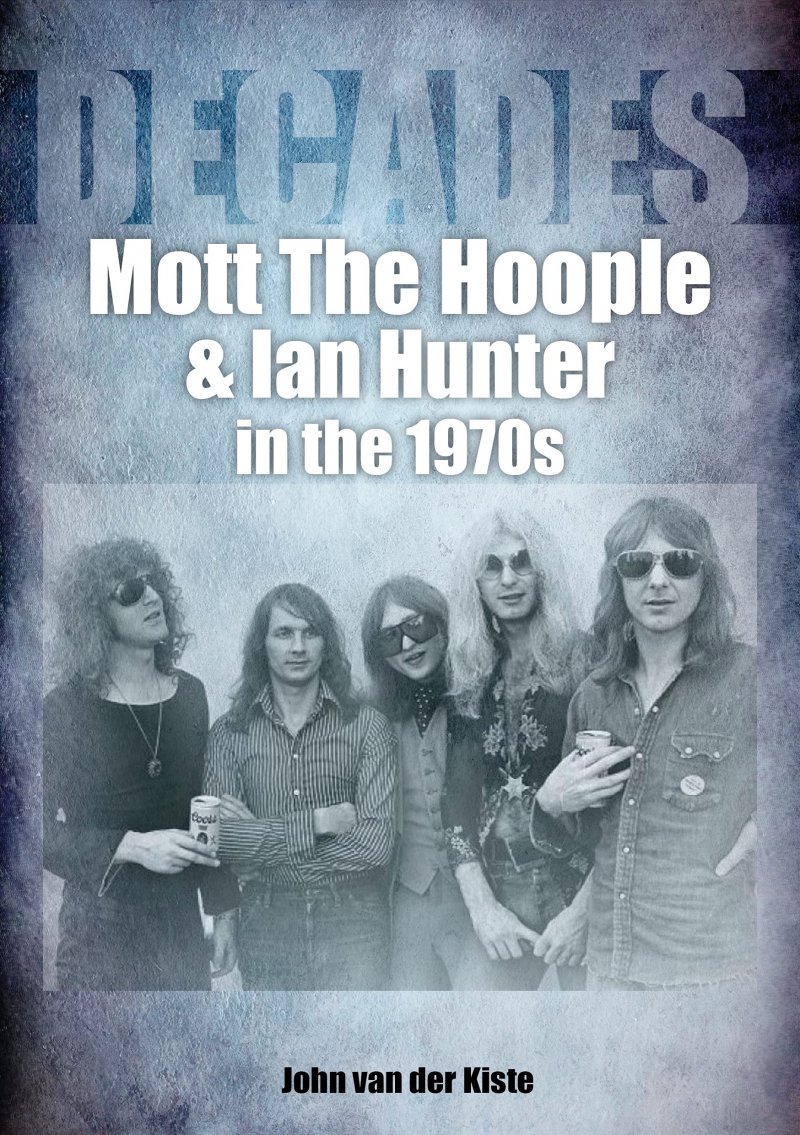 Imagine a pub-quiz night pre-dating van der Kiste's book and the trophy-winning question is something like: "Name the world famous song by Mott The Hoople?" In time, I probably would have come up with the answer (All The Young Dudes) but this one-hit-wonder always ignites thoughts of David Bowie within my own fact-absorbing mind. Which is not so strange, as he actually wrote and performed it, although it made Mott The Hoople an instant overnight sensation in their third year of existence.

With the odd chance that my competitors would be also be able to answer this question, then a "name a song Ian Hunter (co)-wrote" tie-breaker would be needed. I think I would leave the judges speechless and claim the prize on Goin Through The Motions from Blue Oyster Cult, another "hit single" written by Hunter and Eric Bloom in 1977.

As it happens, this fact was one of the reasons why I choose to read this book, although strikingly it isn't mentioned in this immaculately researched book itself, despite several mentions of BOC, an addressed presence of Bloom on one of Hunter's solo albums (You're Never Alone With A Schizophrenic) and the context of the song-title surfacing later on in a paragraph.

This randomly buried personal information shows one of the finer aspects of SonicBond's nicely expanding Decades volumes. For next to their educational character, great reads and comprehensive overviews, there is, in one way or another, bound to be some form of personal engagement to the band/artist involved.

John Van Der Kiste is an author of more than 70 books on historical biography and music including works on Led Zeppelin, Steve Winwood and ELO. Here he takes us on a journey through time and place, and captures the most iconic era of Ian Hunter and Mott The Hoople: the roaring seventies.

Divided into yearly chapters, with every album release highlighted in terms of members, songs, credits and other miscellaneous info, Van Der Kiste has packed this exemplary read to the brim with facts, details and other era-interesting knowledge. Little did I know that Morgan Fisher, a member of Smile (the band pre-dating Queen), became a steady Mott The Hoople member. Nor was I aware that a certain Paul Rodgers (Free) was once considered as their lead singer, before founding Bad Company a few years later with their guitarist Mick Ralphs. Or the proverbial Thank You note of the Rolling Stones who must have been on cloud nine when they could use the working title (Sticky Fingers) from Hoople's second album Mad Shadows. I'm convinced that this recently-gained knowledge, and many other revelations, will see me crush the competition at future pub quizzes.

From a prog point of view the book doesn't resonate completely, for most of the music stays well within the confinements of classic rock and glam rock, the latter beautifully depicted in the obligatory photo section. However, the extensive contemporary (prog)-name dropping, obscure knowledge and the expressive way of Van Der Kiste's words, creates an empathic feast of recognition and an element of surprise which is great and urges one to read on.

He takes a little leeway by starting his story in 1969, the year that Mott The Hoople's debut album was recorded. An appreciated and obvious choice, as this provides a perfect entry into the world of Mott The Hoople. Its final 1980 chapter (which obviously isn't in the 1970s) might at first seem strange, but after reading the book it turns out to be a carefully well-chosen decision. For at the beginning of 1975 Ian Hunter and the other members of Mott The Hoople each go their separate ways, whereupon Ian Hunter launches his solo career and the rest of Mott the Hoople continue as Mott. Changing their name into British Lions in 1978 and releasing two albums, their story finally comes to en end in 1980, which makes for a nice closure to the historic storyline.

A fine diversion from the usual On Track... format, generally discussing the albums and making an archaeological dissection of the songs, is the fact that the Decades format switches this around and focusses towards the biographic story behind the band. Within these loose guidelines, in which the albums still get their fair share of short analytical descriptions, Van Der Kiste has been able to re-construct a fascinating and well-researched story that simultaneously paints a clear picture of Ian Hunter's and Mott The Hoople's influence/importance within the music scene during those years.

The book, relatively short at 126 pages, rounds-off neatly in a 15-page postscript that addresses the remaining decades of Hunter and his associates up to Covid's arrival. Whether these lesser active years will be converted into separate Decades-sequels remains to be seen, but based on this effort Van Der Kiste is welcome to have a go.

All in all this well written page-turner certainly has drawn my anticipation towards his forthcoming Rodgers/Bad Company Decades book, while it made me check out a few albums of the band, one of the satisfying side effects affiliated with these series.

Now, hands on buzzers: "Which Queen member didn't perform on one of Ian Hunter's albums?"