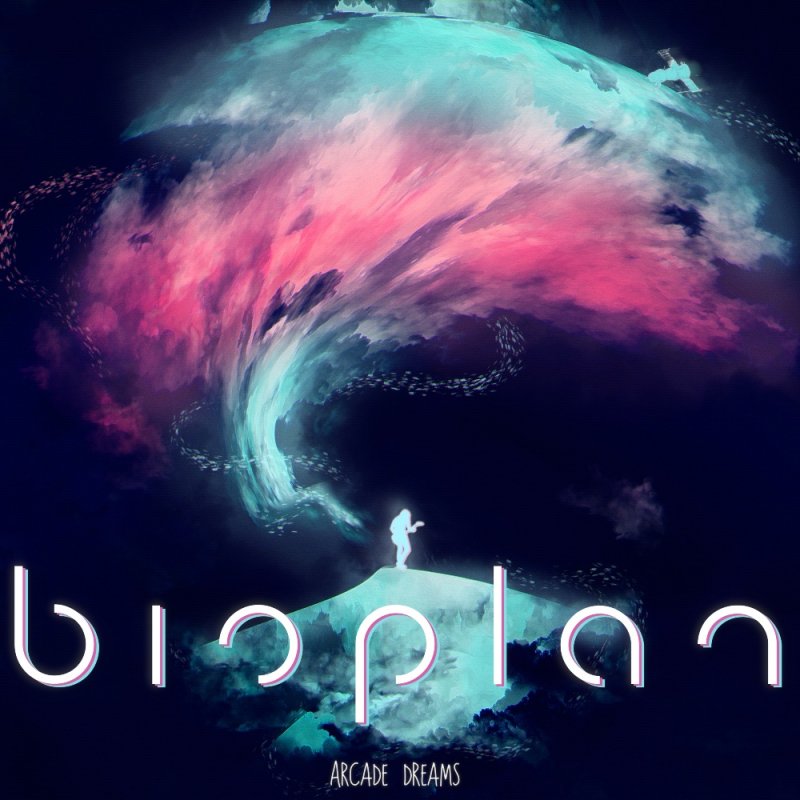 Bioplan is the recording name of Andi Kravljaca who writes and plays all the instruments on his new EP Arcade Dreams. On these four instrumental tracks he demonstrates his mastery of guitars, bass and synths. This EP has the feel of being a gamer's tribute to the kinds of music used to soundtrack the likes of Grand Theft Auto.

The music mixes 1980s synth sounds and programmed drums, with hard-edged djent guitars and some screaming solos. The short opener, Dobrovolsky City, has a loping groove that develops out of pulsing synths and keyboard sweeps. Over this Andi plays a guitar solo with a bluesy feel to it that works surprisingly well with the electronica.

Prog-metal comes to the front on Robots Cost Rent's attention-grabbing, slamming riffs, but for me, the fast lead lines feel like just too many notes at the beginning. I wish he would take a breath, as he does on the more successful Wanton Mechanics. On this last track there is also some great synth soloing to go with the guitar. This provides an inventive contrast. In between these two is another short song, the slower-paced For The Sake Of Smoothness. It is a power ballad for guitar and it rather dominates the mix at the expense of the lovely keyboard work.

Bioplan's Arcade Dreams has good melodies and I like the idea behind the mix of synth-wave and djent but I find the execution, though superbly played, leaves me with only admiration, rather than a desire to follow up on his other releases or listen to this release again. But have a listen for yourself if this sounds your kind of thing. It wasn't really mine. 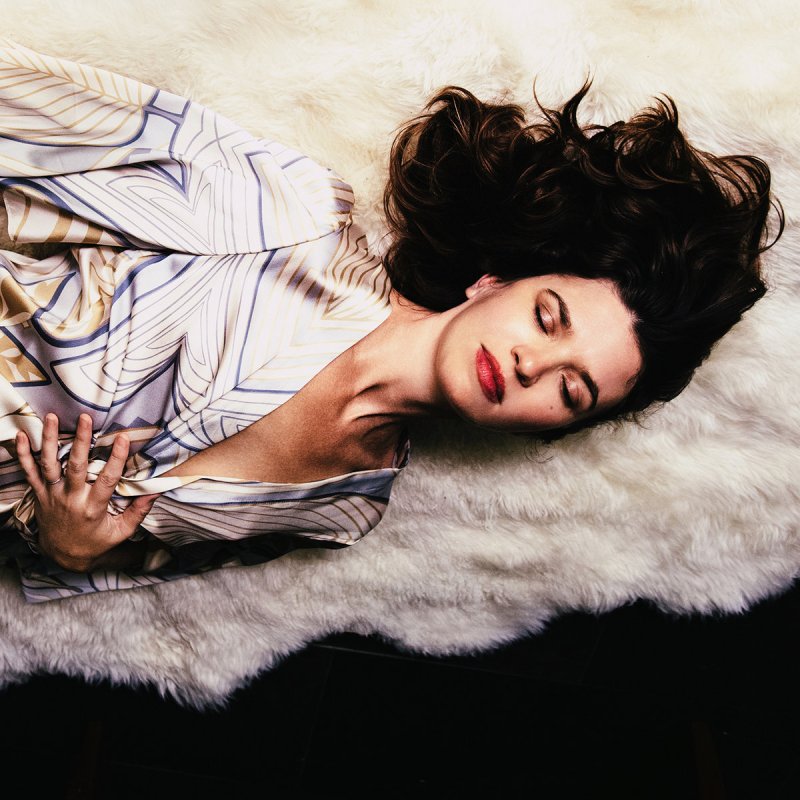 Pianist, singer and songwriter Sarah Perrotta has released her fourth album Blue To Gold. Her music is new to me, and to DPRP.net, and for me it has been a great discovery. The album offers nine songs of artfully-dreamy, atmospheric song-craft with engaging melodies that have a stealthy way of working their way into your subconscious; so you find yourself humming them in quiet moments.

The fleshing-out of the lavish melodies on Blue To Gold is exemplary, as she and producer Jerry Marotta (Peter Gabriel), call on a number of guest musicians whose names will be more than familiar to readers of this site.

On this album Sarah's multi-layered songs deal with her attempts at transforming her experience of life's struggles 'into something of value and beauty.' Her personal songs have a universal appeal on an emotional level. Her lyrics have a story-telling element that you find in the works of Aimee Mann and Suzanne Vega. Sarah expresses these elements with a breathy, soulful voice that she uses in a similar way to Iamthemorning's Marjana Semkina.

The music that supports her melodies is delicate and expresses a certain melancholy, but it is always quietly uplifting. The album starts gently with The Other Side's cradle song of piano and layered backing vocals. Fretless bass from Sarah Lee (Gang of Four) and the slide guitar of Bill Dillon (Peter Gabriel, Robbie Robertson) produce shivers on the mid-tempo ballad Echo Of Joy. The haunting strings of The Wilderness shimmer across this song of loss.

There is a hint of late-period Talk Talk to the beautifully arranged Spectrum Of Color's mix of slinky synth-lines and David Bowie cohort Gerry Leonard's guitar shapes. The title track has a gospel sheen to its backing vocals after the low-fi opening. The closing Circles, featuring Crimson's Tony Levin, takes a run at a Radiohead-style melody and manages to out-pace the Oxford boys in the melancholy stakes.

Sarah Parrotta's Blue To Gold has it's progressive moments throughout. Though overall it will sit at the margins where cross-over-prog meets adroit, emotionally articulate, story-telling art-pop. Don't let this album pass you by if you have any liking for the bands referenced in this review. It is something unobtrusively special. 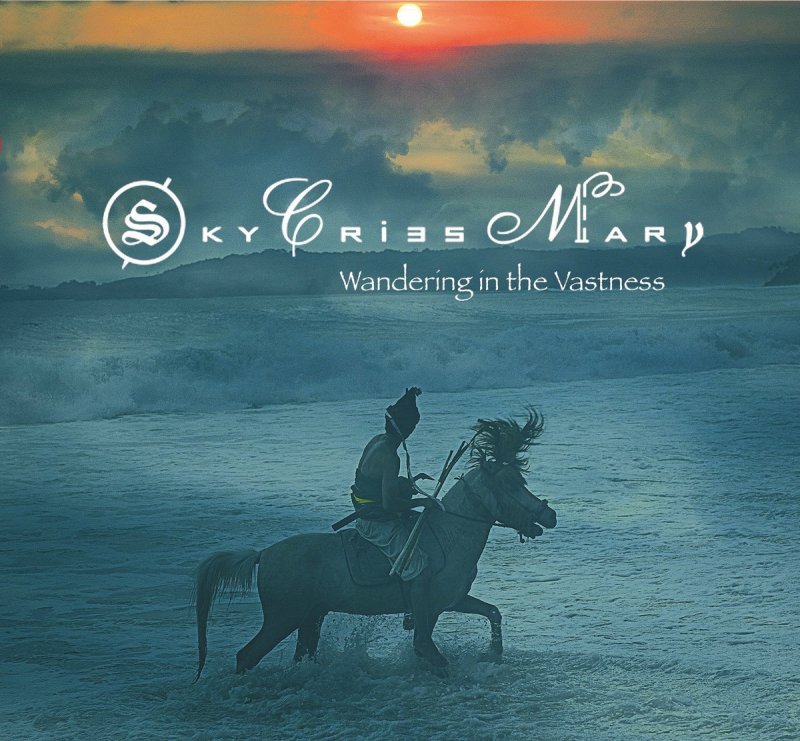 Wandering In The Vastness is the 13th album by the American psychedelic-rock group Sky Cries Mary. Hailing from Seattle and founded in the late 80s by Roderick Wolgamott, it's only the second time the band is featured on DPRP, the first time being their 2010 effort Space Between The Drops.

Upping their game by enlisting Jack Endino (Nirvana, Soundgarden) as their current producer, many of the elements therein described still apply, although some names within their line-up have changed over the years and I do question the mentioned 'virtually no cross-referencing'.

One that pops up without a shadow of doubt is Hawkwind, illustrated by the strong, hypnotic, repetitive space-rock resemblances found in the excellent opening track Crystal Gazing. Instrumentally, its ritual approach is slightly different, yet it has all the hallmark-driving ingredients. The successive L Train dives even deeper into the past with an almost hippy-like sound, as a vintage 60s sound captures the lovely, wavy guitars that remind me of early Spirit, while some elements of The Doors break through.

The vibrant, organic seventies-rock feel of Can't Find The Time (Foolish) shimmers with pictures of proto-punk, which is an image that takes firmer shape in Bridge Sleepers, as the energetic vocal attitude is embraced by intoxicating fumes of space-rock. Together with the fine Rolling Stones vibe of Bright Biggest Eyes, bubbling with hidden psychedelic appeal and strong vocal interaction, and the easy alternative-rock likeness of Lonely Deer, these songs belong to the delightful rocky path that the band has set out for themselves.

They are masters at their craft in creating spiritual atmospheres through immaculate instrumentation, superb vocal harmonies and spellbinding, multi-layered sounds/effects. On the other hand, one also finds meticulously-paved, atmospheric, meditative roads. The eastern-desert feel of The Dolmen still manages to bring some mid-seventies HW space-rock glimmers from floaty flutes, but songs like Red Red Fox and Chaos At The Port are indeed refrained from any form of musical identification, apart from their slowly-progressing, trance-inducing effect.

Prime examples, each in their own way perfectly capable of transporting one to a reflective state of Zen, are Raga Metal Machine and the dreamy, hypnotic waves of the extensive Dream Yourself To Sleep. I'm not sure whether the dozing-off on my part in the latter's case, speaks in favour of the music though.

Next to a limited CD run of 300 copies, fans and those who enjoy this musical style should look out for a vinyl version soon. Grab some incense while you're at it! 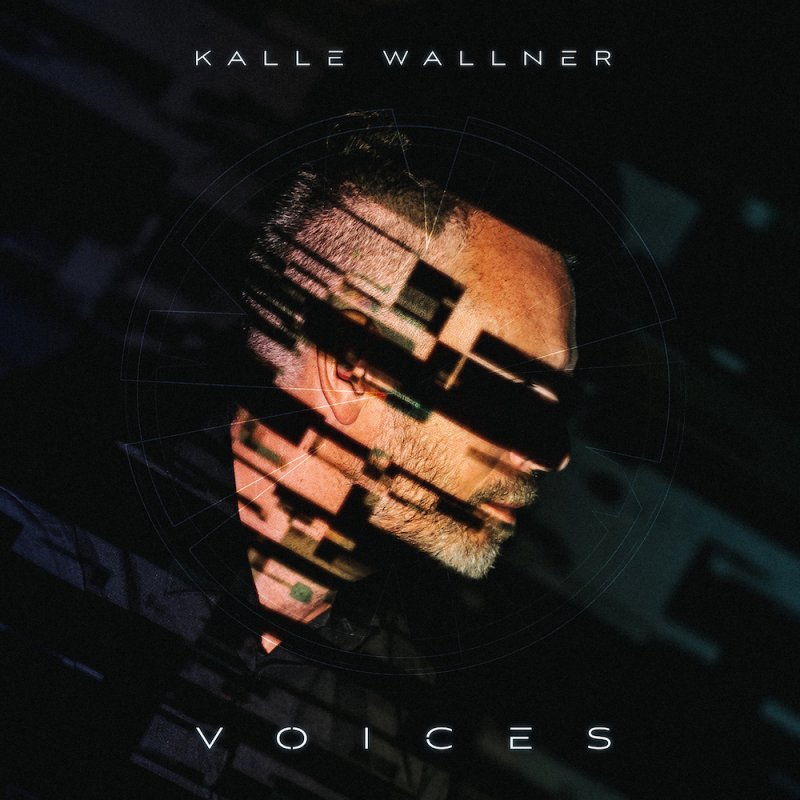 Although I am a big fan of RPWL and quite enjoyed the first two Blind Ego albums at the time they were released, subsequent albums by the RPWL guitarist's Ego band have not been to my taste. So I was somewhat intrigued as to what the first album to be put out under his own name would bring.

As with the rest of his output outside of RPWL, Voices is rather light on truly progressive elements, with the opener One being stylistically the most prog in nature. But what one gets throughout is lashings of melody and some excellent guitar playing. Forget any ridiculous guitar hero posturing and 'hey look how many notes I can play per second', the performance is mature, vaguely reminiscent of guitar heroes of the past and ever tuneful.

There are plenty of instances of heavy riffing such as on Two which will get the locks swinging in those that still possess longer hair, or any hair at all! With the exception of Five, all compositions break the five-minute mark, yet even the two longest tracks that close out the album don't outstay their welcome, being replete with variety, atmosphere and guile.

Strange as it may seem, the sole song, Three doesn't stick out amongst the instrumental pieces; it fits right in. Indeed, one could go so far as saying that the musicality of the instrumentals provides the voices suggested by the album title. Although not familiar with Subsignal, I may have to check them out based solely on Menses' performance, as his strong yet soulful voice is a pleasure to the ears.

The structure of Four is rather pleasing, which just as it seems to be plodding along quite happily but not really going anywhere in particular, the listener is presented with a somewhat tasteful semi-acoustic interlude, sweeping keyboard chords, strummed acoustic, splashes of electronica, a tasteful electric guitar playing over the top and some top class fills from Minnemann. The concluding guitar solo is also a belter.

Five, the short track, could almost have been purposely written as a single. An infectious hook and a bouncing rhythm makes it an ideal memorable piece to grab the attention and spark an interest. However it is Six and Seven. Out that hold the key to the album.

The first of these starts at a more languid pace but soon explodes out of the starting blocks with great glissandos of guitar. The programmed keyboards add a dash of a contemporary sound and the harmonies added by Tannich are quite the delight. Midway through, things come to a crashing halt with a plaintive guitar, organ and keyboard layers and solo voice. As things progress, a bass joins in adding a background beat and the drums add a persistent beat to accompany the return of the programmed keyboards. Then we are off again in full flight as we race towards the finishing post.

But what's this? With eighty seconds remaining we have a false ending, after which things gradually crumble to the end. Seven. Out has a heritage, like Wallner himself, derived from the years of playing Pink Floyd songs with an unmistakably Floydian air and a melody right out of The Carpenters songbook. Think that sounds strange? Well you are wrong. It is rather glorious when all is said and done. I definitely favour the first seven minutes of the piece, as the concluding four minutes or so can't live up to what has come before. That is not to say it is time that could have been better spent, just that it is time taken away my more favoured first part.

Unlike anything from RPWL or Blind Ego, Voices is pure Wallner without any compromises demanded by bandmates. A delightful and surprising album, that although not essentially a progressive album, is one that will find favour amongst our readership.