Antinode — The Canary That Named The Stars 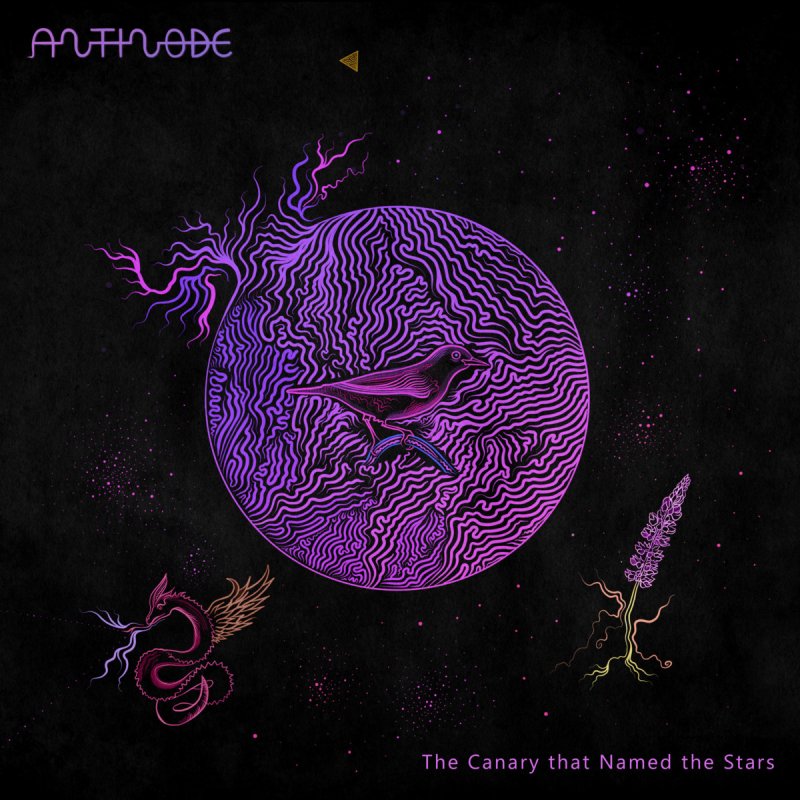 From Seattle hails Antinode, a quartet that consists of Travis Corwin on guitar and vocals, Ian Curtiss on bass, Chance Monaghan on drums, and Martin Petrvalsky handling the keyboards.

For a short release this was harder to review than expected. I was drawn in from the first minute and loved it right away. But when it came down to writing about it, I was lost for words, or rather references. And that's what you want to read, right?

The band's progressive songwriting combines a mix of several elements into an original sound. There's 1970s-sounding prog and hard rock, but then a jazzy touch here and there, bringing some lightness but also a spacey feeling. Some sections have heavy post-rock (never really metal, though), others a modern progressive-rock sound. 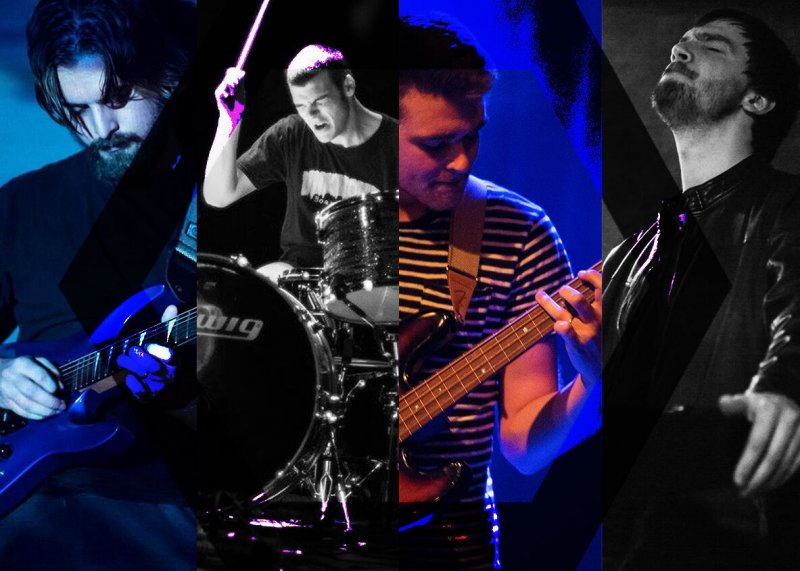 Sometimes I am thinking: what if The Doors had evolved into the 21st century? Sometimes I think of Muse; but more progressive. Bits of Dream Theater but with more feeling. It's really a wonderful mix that bring many unexpected breaks, with great songwriting and arrangements. The production is also good with a good mix giving all instruments a place.

This is a lovely album that I am going to listen to many times. Everything is just good!

The songs are following a narrative called the OE Saga, which guitarist/singer Travis Corwin is also developing into a series of graphic novels. Perhaps a full album release could be combined with those? Until then, there's much to enjoy on this release. 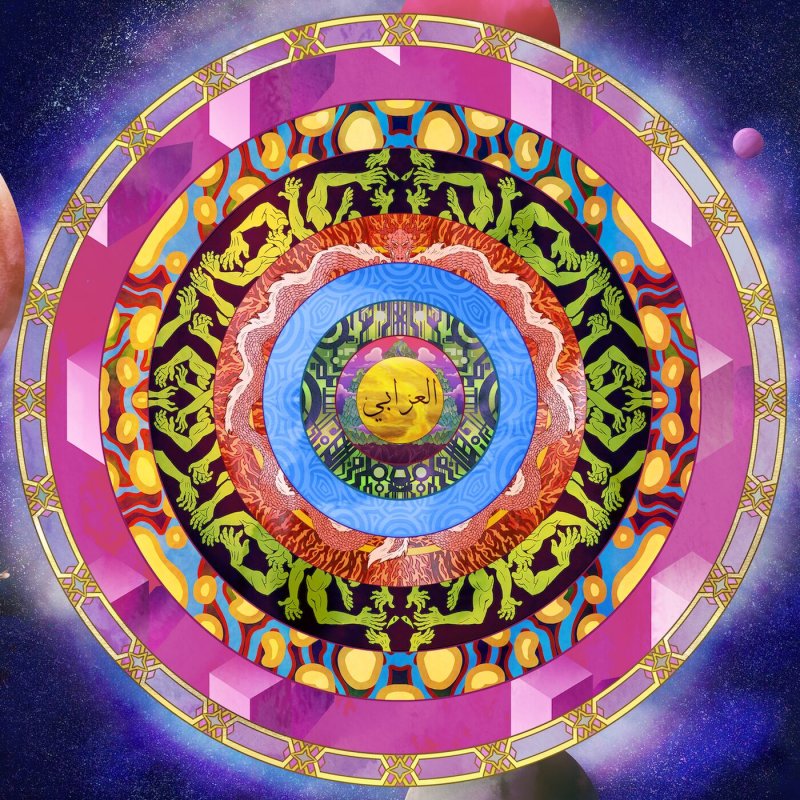 On his Bandcamp page, Feras Arrabi tags himself as a progressive rock and metal virtuoso guitarist. On the evidence of his debut solo album Al'Arrabi, that is a difficult claim to argue with. Feras has been in a few bands, notably with the self-styled “Neo-Sufi” group Albaitil Ashwai, combining local inspirations with rock arrangements. Then in 2018 Feras joined the El Morabba3 collective project and has been their guitarist since then. He has also worked as a session musician.

On Al'Arrabi, Feras is joined by Fouad Azar on bass, Mazen Ayoub on drum production, and Zayd Mseis on percussion; and what a great noise they make. Over nine cohesive tracks you get a full picture of what Feras Arrabi is about musically. The sound is open and warm and very well mixed. You can hear the layers without straining, and the artwork by Nuun Art Studio is rather cool.

Feras opens this instrumental album with Long Way's mix of classic guitar prog and touches of fusion. It moves from a slow, quiet opening to fast-paced riffs and a guitar solo that lets you know immediately what the music is about. It has a restless, forward motion and quiet virtuosity that explores the melody. There is a mix of subtle touches that are not sacrificed for the sake of a bludgeoning riff or some show-boating shredding. 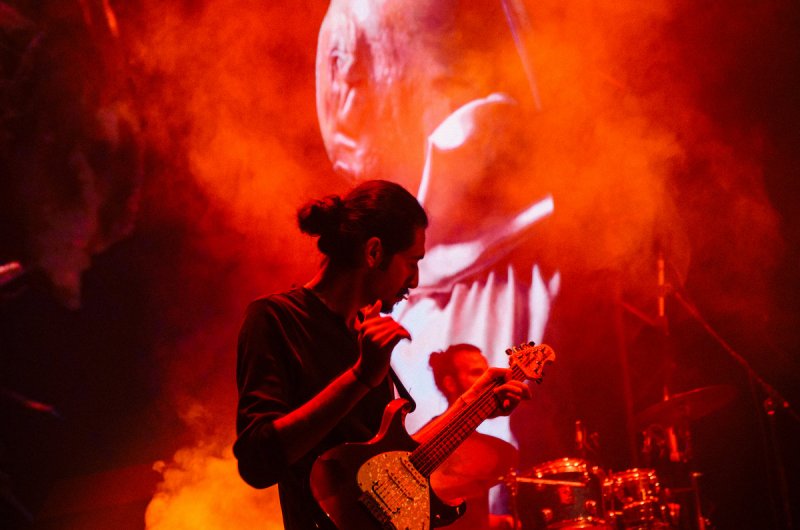 This style continues throughout the album. On Ship For Trip the guitar playing moves from Steve Rothery to Alex Lifeson, underpinned by terrific fusion bass playing. Feras adds a mellow psychedelia to El Aman that grows and transforms on its way to a brilliant climax.

Feras can and does bring the metal on occasion. Through The Orient's stuttering transitions and grungy guitars riff-away fabulously. Dragon Lift is heavier, with classic metal riffs leavened by delicious eastern harmonics.

The same eastern touches build tension on the fusion-jazz meets prog-rock of Fiend until it is released with one of the album's many highpoints. On Take This Pill there are Markus Reuter-like soundscapes over pulsing bass, then with Did It Kick? the sound changes with the unexpected, and great, addition of Basel Naouri's trumpet playing.

To close the album, Feras moves into more obvious, and to my ears slightly less interesting prog-metal, especially on Jupiter's extended workout.

Feras Arrabi's Al'Arrabi is a melodic album of contrasts and varied guitar textures. Feras displays his considerable technique but without overwhelming the melodic drive. The album has a unity and purpose in its well-constructed, tuneful guitar workouts. This is a release that is convincing and is worthy of your valuable time. 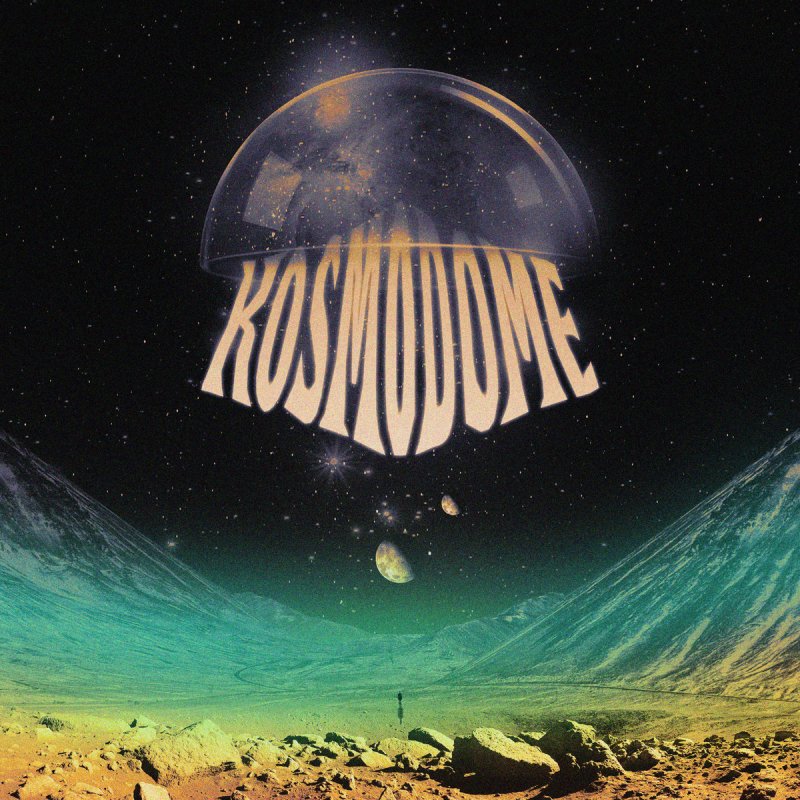 Sometimes, a review of a debut album by a band that few people will have heard of, needs to offer avid descriptions of each track, to give potential listeners a decent of idea of what may be in store for them.

Sometimes, a simple burst of embodied enthusiasm for a new arrival is sufficient.

The brainchild of the brothers Sandvik (Sturle on guitars and vocals, and Severin on drums), Kosmodome's music is a collation of heavy, psychedelic, 60s-coloured rock with a stoner soul that has landed on a progressive universe. 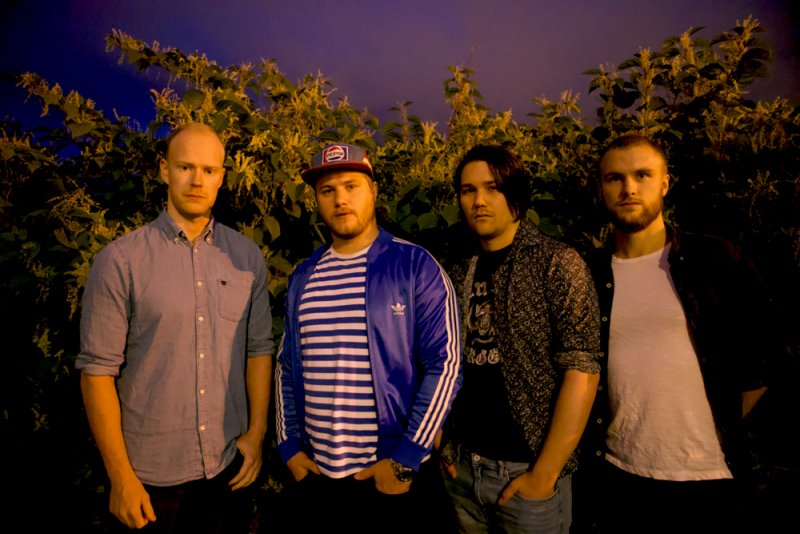 There is a melodic magic that binds these seven carefully-paced songs. The songwriting is clever and the vocal harmonies are so, so, so endearing.

"We aim to draw listeners into the Kosmodome," explains the band. "Throughout the album, we dwell in the melodic and the groovy; a baseline for deep dives into massive, heavy soundscapes and spacey atmospheres. Instrumental sections are central to our musical storytelling, further supported by our lyrical themes; introspection and wonder, ruminations on the human condition, and frustrations toward contemporary society."

Opener Retrograde grabs the attention with its delightfully-bright guitar lines and drum patterns that hint at a jazz-fusion baptism. Hypersonic bounces along on an 80s alt-pop groove; a psyched-up version of The Cure and Talking Heads.

Then Deadbeat introduces the promised stoner influence amidst equal slices of jazz-fusion and alt-pop and psyche. By the mid-section the song sits somewhere between The Doors and Masters Of Reality. The dynamic shifts throughout this song are superb. As is the banjo-esque solo that veers us towards a Cajun-swampy sort of ending. It's mainly bright, very melodic and very accessible; but with depth and detail.

Waver 1 is where the band finally let their hair down. Five minutes of fuzzed-up stoner-psyche. Perfect.

By now you will be fully wrapped up in the Kosmodome's wonderful groove and ambience, and the final three tracks will speed-by. There is a similar vein of variety, but with more progressive variety as the band adds few more styles and influences to their repertoire.

It's all very retro but in a very modern way. I just love this album. And if your tastes cover any of the artists and styles mentioned above, then I can pretty much guarantee that you will too. One of the most promising debut albums that I have heard this year.

What Strange Beasts — The Maestro's Tale 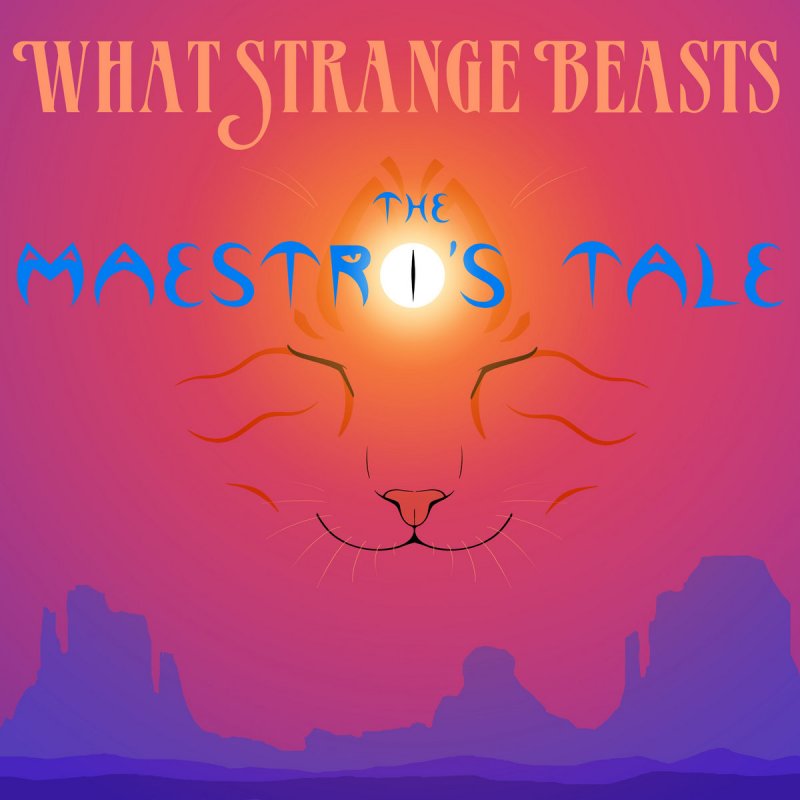 With so much independent music being released nowadays, it has become incredibly difficult to separate the wheat from the chaff (good from the bad). And there is always an awful lot chaff!!

The sad thing about this, is that occasionally a really tasty piece of wheat gets mixed up in all the chaff and is likely to be quickly confined to musical obscurity. Finding a needle in a haystack is another apt analogy.

That was almost the fate for this Seattle-based art rock quartet, as their debut album lay buried towards the bottom of the over-filled silo at DPRP.

Random-selection however saved the day, and I am happy to have become acquainted with What Strange Beasts. Read on, and you may well be too!

What Strange Beasts was born while watching Alfred Hitchcock's Psycho one Halloween night in Seattle. Aaron Kremer (bass, vocals) and Jonathan Maxwell (drums, vocals) attended with a mutual friend. Post-performance conversation turned to music, and soon enough they were jamming their way through the Pacific Northwest winter. With the swift addition of Benjamin Ruby (keys, vocals) and Cat on guitar, the line-up was complete.

This album has been envisaged as one long-form concept album. There are nine 'songs', each separated by short instrumental tracks. A total of 17 tracks. Although the record is designed to be enjoyed front-to-back as a continuous landscape, the band came to that decision organically. “The songs formed naturally while we jammed” says Ruby, “but they seemed to slot together with a stunning kind of serendipity.”

Personally I don't really hear the concept album nor the long-form composition. I have simply appreciated this as an album packed with great songs and musicianship. All nine songs more than stand on their own. The short tracks are nice little interludes.

As you will have noted, there are three singers here. The vocals and stacked-harmonies are superb throughout; a real selling-point.

The Maestro's Tale is also packed with some delightful guitar motifs, waves of synths and feel-good rhythms. It's not as eccentrically odd-ball as the Moron Police, but the bright melodies and the sheer joy of making music shines through in a similar way. The horns of Thomas and Dave Marriott and the cello of Alisa Milner add some clever textures to Onslaught and Precipitation respectively.

The band credits their influences for the album as Pink Floyd, The Moody Blues, Emerson Lake & Palmer and Bob Mould. You can note the influences but the end result sounds like none of those. This is art-rock with elements of jazz, pop and psyche. I'm often reminded of the moods created by Cryptex, especially on the more vocal-led songs such as Antidote and the more dramatic Onslaught (some great bursts of Hammond on that song too). The eastern vibe of Eyes On The Road gets me every time.

It's very retro, but with a modern style and production thanks to the studio work of Don Gunn (Peter Frampton, King Crimson).

My favourite songs would probably be Dear Maestro, Up In The Air and Onslaught, but there really is nothing that I do not enjoy across this ambitious and beautifully-crafted album. Way too good to be tossed out with the chaff!!