Heartland — Into The future 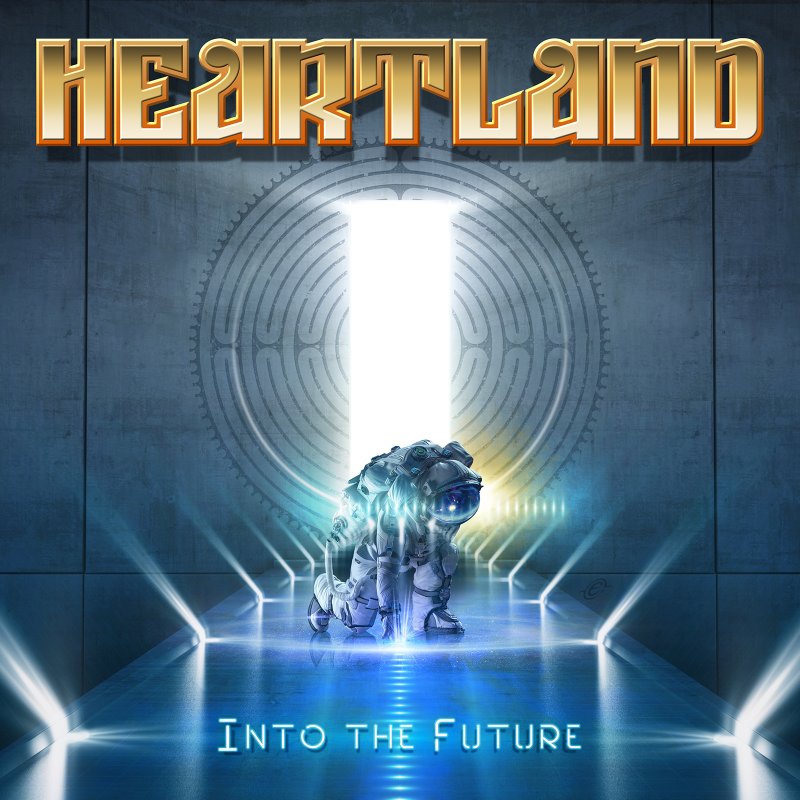 After an hiatus of 14 years, Heartland, led by vocalist Chris Ousey, return to the melodic rock scene with Into The Future. After a recent escapade with Snakecharmer, it sees Ousey once again team up with Mike Slamer, having previously joined forces in Ozone in 2015. Both renowned names in the field of melodic rock, it is Slamer's name that fully grasped my attention in light of his earlier involvement with The Streets, Seventh Key, Steelhouse Lane and long before that with City Boy, whose The Day The Earth Caught Fire sees a fairly regular spin in my CD player.

Actually I wouldn't be surprised if Slamer's middle name turns out to be Midas, for as far as I can remember everything he touches turns to gold. His utterly brilliant solo album Nowhere Land has reached platinum status in my all-time favourite records list. Admittedly Into The future's effort isn't the same sort of category, but rest-assured, fans of the genre simply have to smash their piggies and count their savings (and blessings). This album is a masterful example of vigorous melodic rock with touches of AOR and infectiously hard-hitting compositions, with Ousey's performance totally justifying the accolades: 'The man with the golden tonsils'.

The main attraction to melodic rock is the catchy refinement of the melodies, and this album has got it in spades. It resonates comfortably upon first exposure. The second time around consenting feet subconsciously start to replicate the formidable rhythmic tandem that pushes the songs forward with an irresistible drive. After a third engagement, as key flourishes add further refreshing elements, this album immaculately shows there's only one way to rock. I can't drive at 55 when music like this is inserted into my car stereo.

Opener A Foreign Land instantly sets the right uplifting mood with a touch of old Heartland. Once the heavy Caught Up blasts-in with excellent riffs and ravishing melodies to project visions of Tyketto, the party's definitely on. The John Waite-styled ballad Living Thing reveals strong and emotive vocals from Ousey, as elegant key insertions add AOR glimpses, which is an aspect that comes to full fruition in Giving It All Away, with its flashes of Journey.

The exciting A Dangerous Game adds sophisticated blues, followed by the radio friendly Climbing Your Wall and heavy rocker Mouth To Mouth with some delightful slide guitar.

The one aspect that makes every single song stand out to me is the brilliance of Slamer's escapades on guitar; riffing and soloing as if his life depended on it. He's in excellent shape throughout the album, adding vibrant solos and grabbing hooks, and although his style is different he frequently reminds me of Neal Schon when he oozes his melodic sense, as demonstrated in Not Guilty which brings flashes of Bad English to the fore. Highly addictive stuff.

Every song is of the highest order, caught in a top notch production, and it's hard to single out a favourite track. Twisting my arm would probably yield Bolt From The Blue. This sublime song sees the band infinitely rock the night away in perfect unison on a compelling drive that imprints the heavier side of Giuffria.

In order not to spoil everything I'll suffice to say that White Lies, Working For The Man and When The Band Plays fit perfectly into the melodic rock scheme of the album and round it off in a very rewarding fashion.

Growing up in the 80s, my love for melodic rock was well-fed and nurtured. As a result Heartland were on my watch, but never so exciting as now. Although I'll be the first to admit that progressive rock is fairly absent here, this type of music, when done right, makes me weak at the knees. This highly contagious album sees me touching that illustrious 'play again' button every single time. Come to think of it, this might well be one of those future classic albums the 'repeat' button was invented for.

For melodic rock fans, this is about as good as it gets. And when any of the bands mentioned within this review resonate to one's musical likings a mandatory listen is also in order. If Heartland, in its current line up, can keep up this high level of entertainment on upcoming releases, it's not just their future that's looking bright. It marks a very welcomed return and just to be sure a first deposit into my new piggy bank has just been done. Awesome stuff. 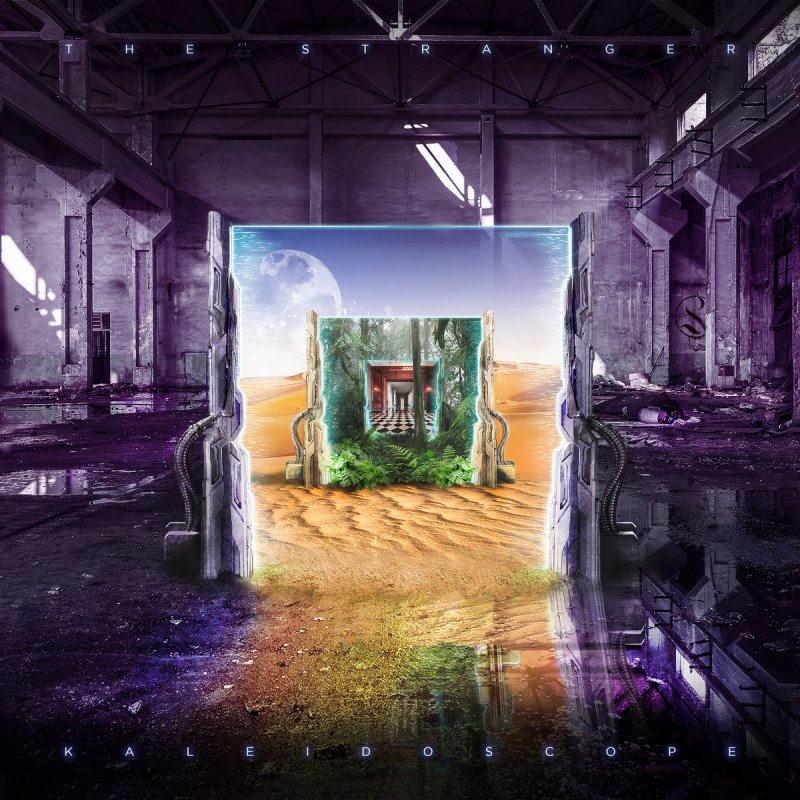 To partially quote the description for DPRP's Metal Monday series, I've always had a fascination towards (progressive) music of a heavier disposition, starting at a very young age when hard rock and heavy metal were a part of my daily routine.

Encountering progressive rock changed this momentarily, as once the melodies and lush interplay between keyboards and guitars, a match often found in AOR and melodic rock, gelled, I was happy. For a period of time prog-metal took a back seat and my exposure was low.

Joining DPRP and visiting the ProgPower Europe festival in 2019 opened a new doorway and the fuse was lit once again. It probably means that some references I shall share might feel rusty, having missed out on recent arrivals, especially in the Australian scene, from where The Stranger hail. This band is a shining example of the pure prog-metal pleasure that I've fallen in love with lately.

It also features some seriously strong and highly versatile vocals from Tom Frayne who changes effortlessly from crystalline-clean into heavy-harsh grunts and vice versa, giving many of the songs a beautiful balance between sensitive lightness and heavy aggressiveness. This aspect suits the compositions about fears and hope, in light of social isolation, climate change and political rhetoric.

Next to Frayne, the band consists of Kalen Austin (guitar, backing vocals), Adrew Taylor (guitar), Linc Morse (bass) and Daniel O'Brien on drums. Attentive readers will notice the absence of synths/keyboards; A careful examination of the liner notes and the attractive artwork, where images depict the various gateways to the songs' topics, reveals no presence of the instrument whatsoever. Strange, but rest assured they are present, very present actually, and give a zestful zing to their to the band's sound, especially in the first two tracks.

Growing anticipation as the orchestrations open the atmosphere in The Eleventh Hour is firmly fulfilled when the music soars into Vanden Plas boldness over which synth-waves splash an ocean of divine colourings igniting visions of Voyager. Through mighty melodies and an extremely catchy feel, where the harsh vocal adds dynamic depth and tantalising synths brings riveting richness, it's a strong opener.

It is surpassed in The Gemini which thrives on an AOR-ish synth opening and excellent executions mindful to Dream Theater. The dexterous display in driving rhythms, ironclad high pitched vocals alternating with harsh growls and additional sublime synths turns up the catchiness some more. Packed pristinely with contagious melodies, it flows naturally from start to finish and ends as excitingly as it opened with lovely 80s-inspired synths.

Effortlessly grabbing attention with djent riffs and groovy Eldritch aggressiveness, Jungles ups the complexity scale with baffling breaks, growls and a fierce Pain Of Salvation heaviness. Converging into an enlightening bridge with jazzy intonations and enchanting guitar play, the infectious melodies return soothingly once again, before the song ends in bashing brutality.

Jester continues the powerful performances with empirical Queensryche quotations, where bass and guitars add sensitivity and relief. Slowly building into an unbridled union of melancholy and mellow melodies, the subtle synth orchestrations add lavish layers, while traces of Teramaze light-up as the pace is increased. With a brilliant guitar solo, soulful vocals and slowly intensifying structures, it is an excellent example of their song-writing credentials.

Siren steps into a wondrous world of funky melodic rock with tantalising tendencies of prog metal. Melodic catchiness sees a triumphant return, embraced by tasty synths and vocal harmonising, while a peppery funk delivery midway adds a swing like nothing before, igniting occasional memories of Talisman and Jeff Scott Soto. It's an adventurous composition that shows many enchanting faces.

Peacefully opening on a luxurious bed of synth waves and graceful guitars, Creatures In The Canopy brings elegant touches of Queensrÿche and Kingcrow, fading instantly once growls change the atmosphere completely. With narrating nuances fuelling the composition's frightening future message and a dreamy ending of beautiful guitar leads, it is once again a jubilant journey in prog-metal heaven.

The Devil You Don't is just as convincing, as it threateningly opens with sirens wailing in a thunderstorm. Gliding through different atmospheres with acoustic touches and a victorious return of refined melodic guitars, all hell finally breaks loose and the composition tumbles into a tightly-executed metal dominated by extensive growling vocals bringing to mind the ground-shuddering effects of Persefone. Challenging as these vocals are on my part, musically there's no complaining.

Overall Kaleidoscope is an Xuberant Xperience (ed: grammatical leeway approved) filled with fantastic compositions that goes from strength to strength and does justice to its associating colour scheme. An amazing achievement by a very promising band and a definite contender for my 2021 Yummy Year-list; and to my surprise I actually feel myself warming up to its harsh vocals, which is something of a first.

I do hope ProgPower Europe has a time-slot available in the coming year(s), for The Stranger's live reputation supporting Caligula's Horse, Voyager and their performance at ProgFest 2019 has already preceded them. I'll gladly make my way over to see this splendid album performed on stage. 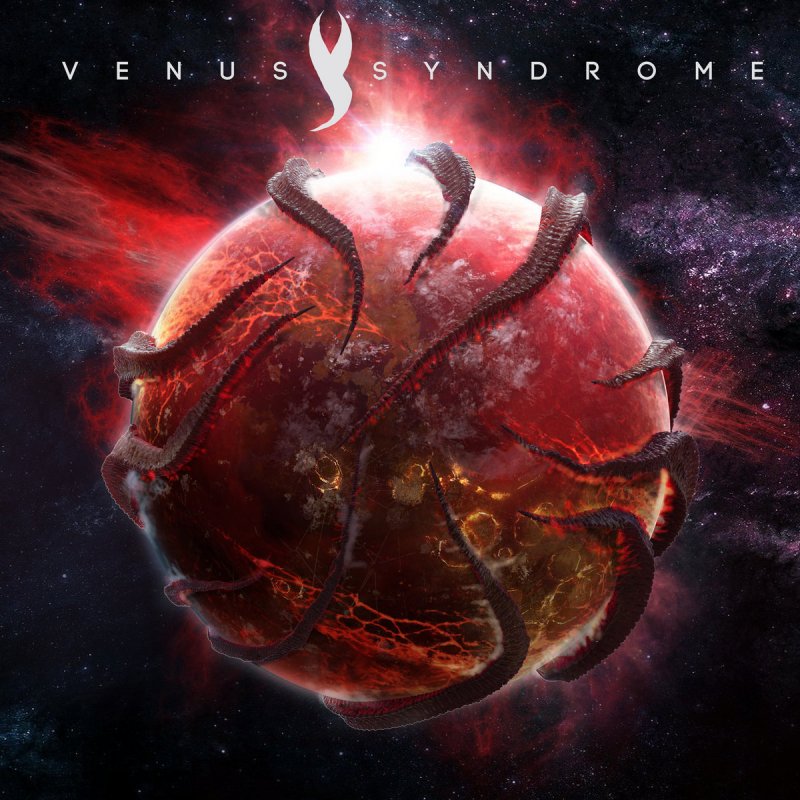 It came after main composer and guitarist Ayman Mokdad revealed that he had written original material inspired by the concept of the "Venus Syndrome", in which the Earth undergoes runaway warming and the oceans boil off.

From those lyrical and musical ideals, Venus Syndrome released their self-titled debut album in April 2020. The band is an international collaboration between musicians on two sides of the globe. Rodolfo Lima Sproesser is based in Brazil, while the rest of the group is in France. Cannibal Star is their second offering and was officially released on October 22nd, via Rockshots Records. 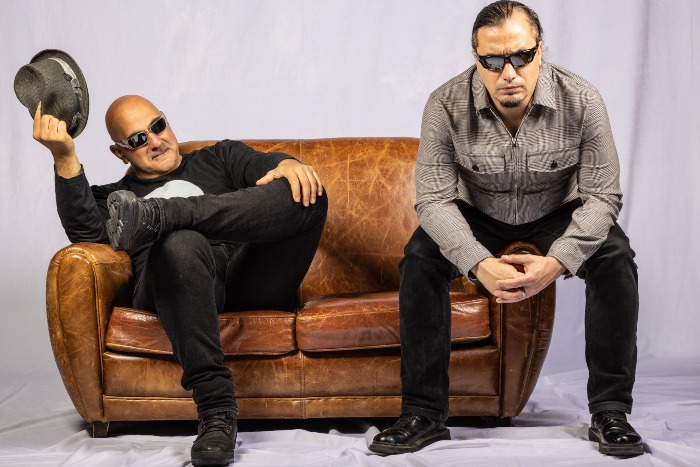 Labelling themselves as "environmental Prog", Venus Syndrome is keen to stress that the message behind their music is very important. "Humanity will disappear if each one of us, each individual do not contribute to safeguarding it. Art, and particularly music is a healer and can help us reach the target and build something strong for our kids and their kids, hopefully." states Mokdad. Look at the song titles and you will see that the themes are clear, but I do not find that it dominates the listening. Neither does it come across as preachy, in an eco-sermon sorta way.

With all of that background, I was expecting something in the Dream Theater mould of complex progressive metal. What the band offers is definitely prog-metal but in a more streamlined fashion.

The melodies, riffage and rhythms have taken a clear influence from power metal and added a level of rhythmic complexity along with the vivid environmental message. Time and time again I am reminded of Pagans Mind. The singer, Emmanuelson, rests in a more accessible high/mid-range, but the vocal phrasing and use of harmonies owes a big debt to Nils K Rue.

Look at the track lengths, and very little passes the five-minute marker. The soloing is brief, if at all.

So overall it's an album that I've enjoyed listening to. It's not offering anything new nor original; although I do not think it is striving to. There are some solid melodies, a few unusual grooves and the performances are of a high level. It's just missing that spark that would make me want to revisit it too often in the future.