Young Swedish psychedelic rock band Khadavra made an impression on DPRP's Jerry van Kooten with their second album Hypnagogia. Just before their third album was released, we got the chance to ask drummer and engineer Alex Eriksson a couple of questions.

Congratulations on finishing the third Khadavra album! Can you tell us a bit about the process, how it was different from the previous two? I know besides drumming, you are quite involved in the process of recording, engineering, mixing, and production.

Thank you so much! I am glad that it is finally finished, and that it has become what it now is. Yes, this time I was personally very involved in the whole process of the production, more than ever before.

Everything except Possession (which was recorded at Nacksving Studios in Göteborg) was recorded by me, something I have learnt to do by simply doing it in our rehearsal room over the past seven years; picking up knowledge through experience as I go. I did actually record our two previous albums as well, but I think I did a better job this time.

The same thing goes with the mixing. It is something that is still very new and exciting for me, and I did get a very good opportunity to learn a lot of new stuff in doing all the mixing on this album. There are so many different instruments on it, and a lot more vocals, which is probably the hardest one yet for me to get right. Every song demanded a different approach from me as a mixer, as there is such a broad variety of styles that we try to cover.

It is also recorded with different members and different orchestrations, and the styles of the music that Hologram presents all over the place!

That's some of the differences this one has from our earlier releases. Those were both more of a focused and coherent effort of putting together an album with a universal theme. Our first two albums were done in a limited time period, with a pretty clear idea of the album before recording. Hologram is actually a collection of assorted singles we have done since 2019. Four other songs were meant as a separate EP, that was supposed to be called Hologram, but we thought it would be more appropriate to put everything together into the album that we now have.

You recorded the songs on this album over a longer period of time. Several tracks have different musicians. How did the line-up change? Is it a more or less a fixed line-up now, say for when you can tour again?

Possession was recorded when Nils Erichson was still with us on keyboards (he left the band shortly afterwards) and it is the first recording to feature our friend Ole Mathis Haglund on second guitar. He was still with us when we did Lucid Parasitosis and Zoning Out. He was part of the band during the beginning of writing Katla, but moved from Gothenburg before we completed and recorded it. We did that one as a trio, with Seb dealing with the Mellotron parts and Ola Lindqvist doing some flute overdubs. Ola is a talented musician who we met at our first show in Stockholm several years ago. We had him in mind over the years and saw on Instagram that he recorded some flute on his solo project, which made us impressed and keen to have him featured on one of our songs.

Marcus Holmström, who is our current keyboard wizard, took part in the writing, arranging, and recording of the newer tracks: Shapeshifter, Vemod, Anhedonia, and Hologram.

Liv Fridén is a fantastic classical flautist that Seb found and got in contact with on Facebook, and she was instantly interested in playing with us. At first she was playing songs from Hypnagogia live. Later she agreed to lay down some overdubs on Lucid Parasitosis, Possession, Vemod and Hologram. Something she did in the most impressive way I've experienced, really. A very talented, competent and extremely intuitive player that gave a much more magical and on-point performance than we thought we could ask for.

So the line-up changes and guest appearances just happened. No planning, just part of our journey. We happen to meet some interesting musicians on the way, who are drawn to what we are doing, and then we just find a place for them within our world.

It is an exciting thing, but also frustrating. It has been hard for us to stabilise completely since starting the band nine years ago. It's a constant struggle that sometimes feels like a curse but at the same time it's a great creative source.

Our current line-up is me, Seb, Jón, and Marcus. Hopefully that is how it's going to be for as long as possible. We've also recruited Josef Loberg on extra guitar and brought Liv to rehearsals for our upcoming show in Gothenburg next month. So that's the band as of now! 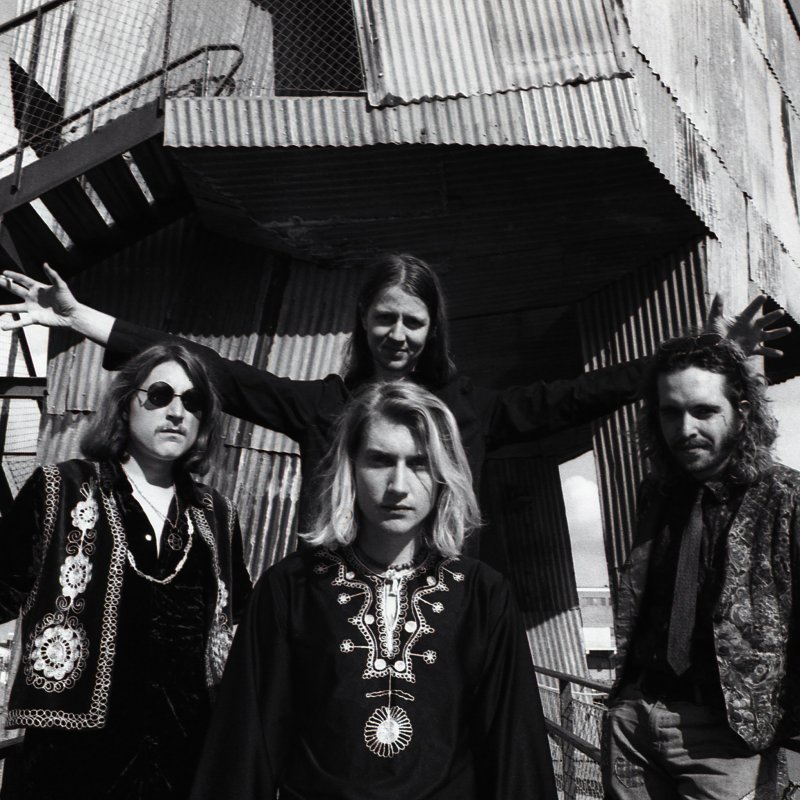 A first listen tells me the musical direction of the band has shifted slightly, with the music becoming more complex in several places. More progressive I would say, as if Frank Zappa or King Crimson are becoming a bigger influence. (The main style has remained of course, and more importantly the atmosphere you're creating.) How do you see that?

You think so? Interesting. It's not a particularly conscious move on our part. Well, we have been trying to steer away from indulging in obscure complexity, something we delved into a quite a bit on our first album. Our newest songs are made in an effort to open up our music, making it a bit easier to connect to, while maintaining our own eccentric, personal style of course. But yes, Possession and Katla are both pretty dense songs that have messed with our minds a lot. Haha! And I would say that they are influenced by more complex bands that we listen to.

You could say the musical direction has changed a bit as a result of changes in the line-up and in musical taste. We've fully embraced modern music now! Especially shoe-gaze and post-rock, but also electronic acts like Boards Of Canada and Aphex Twin.

Has the way of writing, composing, and jamming changed over time?

The way we write is basically the same, but this time there was much less jamming in the writing process and more finished ideas and concepts that we worked on shaping together. Like Possession and Vemod are essentially Jón's visions. Katla, Hologram and Shapeshifter are Seb's, and Anhedonia is mine.

We've given more room for each other to take turns to be the creative leader of a certain song or idea during the creative process. This has broadened our musical spectrum, as it has opened us up for more contrast and eclectic nuance, by fully embracing each of our individual eccentricities. It has also resulted in songs that are somewhat more cohesive than our material can be, as they are products of one coherent style, with the rest of the band trying to emulate that style in the way that they see fit. Rather than trying to put all of our favourite stuff into one song.

74 minutes is a long album, and perfect for a double vinyl, if you ask me! Any plans?

Yes it is indeed long. And it is actually planned to be pressed into a double vinyl! By Black Widow Records, who also did Hypnagogia. It's going to be awesome!

Thank you very much, Alex. I hope this album takes the band a step further towards recognition and that I get to see you play live one day! 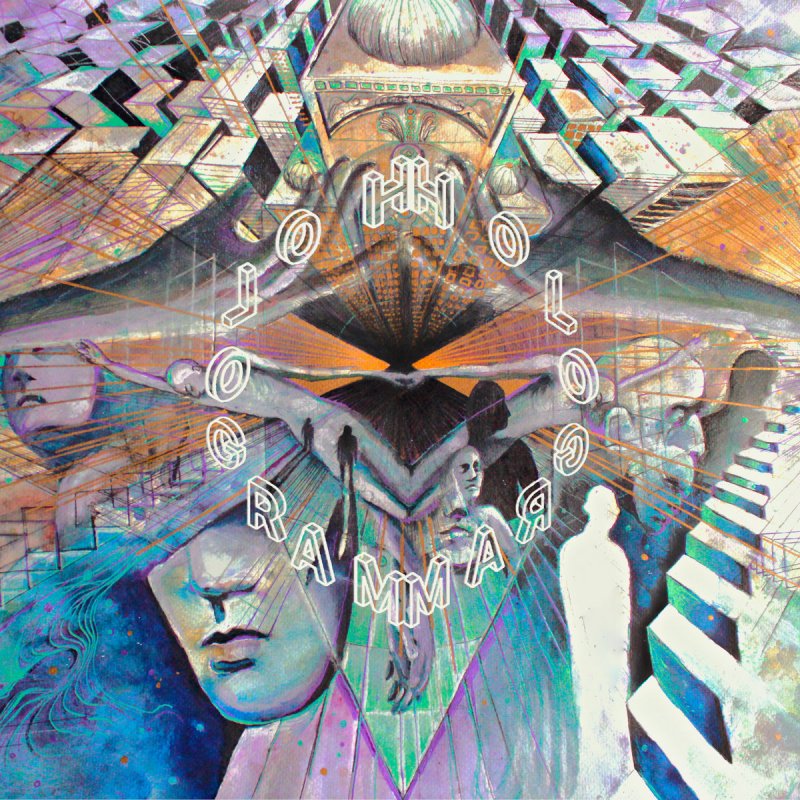 I learnt about this young Swedish psychedelic rock band through their previous album, Hypnagogia. Since then I've followed the band via their Bandcamp page and got a few previews of the forming of some of the new tracks in the past couple of months. It is interesting to see how something musical takes shape. Thus I already had an idea of where things were heading; even so, I have to say it is a little more than I expected.

So here it is, the band's latest album, their third, called Hologram. As mentioned in the interview above, I feel the band has grown.

The opening of Shapeshifter for example. It took a while to hear all those layers with oriental melodies, heavy riffs, and carefully placed organ crashes. The bass and drums come out wonderfully in the mix. Then the song slides into a melancholy, followed by so many changes and breaks it's like King Crimson on a high. Very progressive!

Lucid Parasitosis (which was called Lucid Revival until just before the release) is the most Hawkwind-styled track, but darker, almost possessed. (Therefore a good intro to the track following it?) The sitar, doubling with electric guitar works great. I wouldn't mind hearing more of that.

With Possession, the band also portrays more post-rock elements, making their sound broader than ever. Slowly developing from the sitar-based Eastern melodies, to a guitar-driven section with jazzy piano that adds a melancholic 60s feel, is both unexpected and works very well. The flute brings a resemblance to countrymen Agusa. Heavy outbursts, proggy Mellotron, symphonic guitar melodies; this track is a monster of a trip. 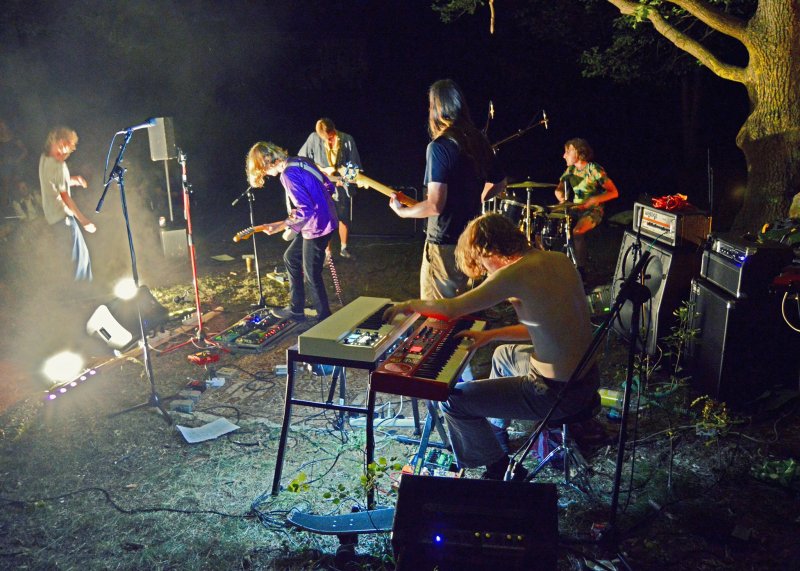 While Zoning Out is quite a heavy track, the quality of the mix makes you hear every instrument so clearly. Not clean, but clear. And progressive in sound and structure, too.

Katla, the second quarter-of-an-hour track, contains sections from Blue Öyster Cult_'s darkest songs but even more doom and heavy elements à la *Sólstafir, including some of the singing. The opening is clearly influenced by electronic music. Khadavra use it to form the song like they want to. Then it's Mahavishnu Orchestra going psychedelic, before we go back to Hawkwind and Black Sabbath. Psychedelic, angry, spacey, progressive.

There's some slow, trippy sections on this album as well such as Anhedonia, or the opening to the title track. But dark is a stronger environment for the album as a whole. Take Vemod. There's a less psychedelic vibe, but more of an alt-rock or even bluesy, melancholy atmosphere.

The album has more lyrics and vocals than before, though it's still largely instrumental. To prog purists, the vocals might be the weakest link on the album, but I think it fits the music. A dreamy Mark Hollis perhaps.

The wide range of instruments is intriguing. While staying close to the psychedelic foundation, the accumulation of influences brings this to a new level. Some sections display the intensity that I like in Mahavishnu Orchestra.

Even with the previews to enjoy, the whole Hologram took me a a bit longer to, well, "get". Not to get into, because I was drawn into it amazingly quickly and easily, but to take a step back and be able to describe it. Khadavra are covering several styles that might appeal to a larger audience, while keeping it so special that it might be for connoisseurs. It's like Ray Davies once sang: "You've got this strange effect on me, and I like it".