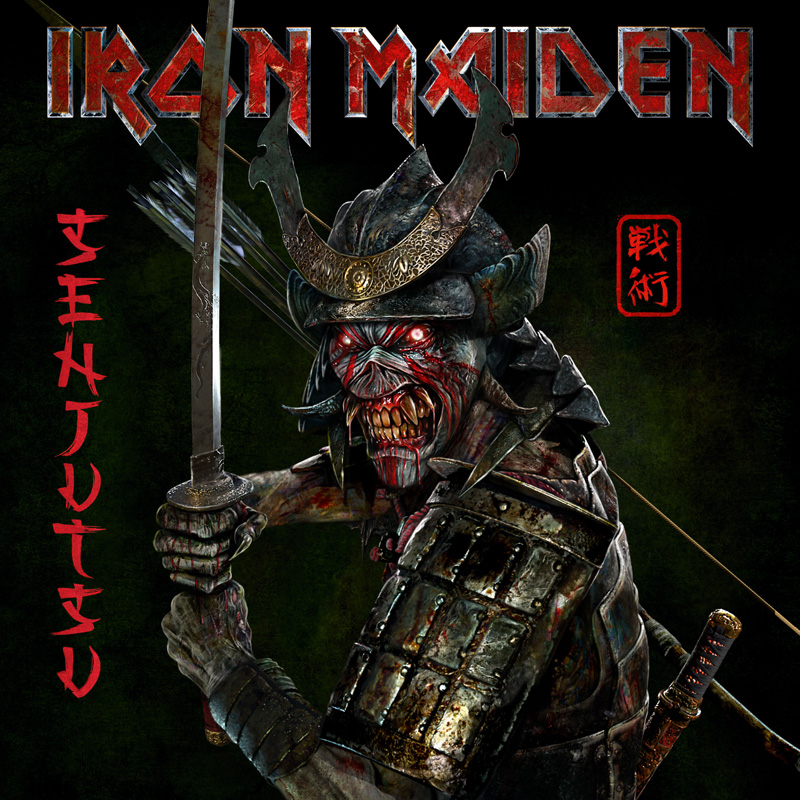 Studio album number seventeen from the masters of heavy metal, sees a continuation of their drift towards epic songwriting that has been evident since the regrouping of their classic Dickinson-led formation two decades ago and especially since the release of the epic-crammed A Matter Of Life and Death in 2006.

Founder member and song-writer-in-chief Steve Harris has never hidden his love for classic prog. To a lesser extent, neither has their frontman.

I'm old enough to still have the Spanish LP version of Killers that I bought on holiday 40 years ago; having heard the name and liked the cover. I eagerly bought The Number Of The Beast on its release and queued up for tour tickets. I did the same with all of their albums until Seventh Son Of A Seventh Son, after which my tastes turned to more adventurous progressive bands. Other than being underwhelmed by Brave New World, I have only really given 'modern' Maiden a cursory listen in the past 33 years.

However, two things piqued my curiosity with Senjutsu. 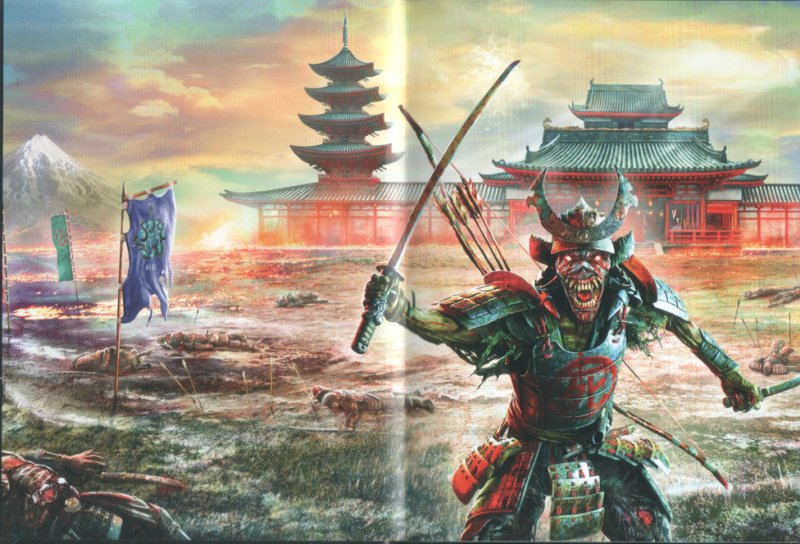 Firstly, the artwork and packaging is amazing. I went for the deluxe book version, some examples you will see here in this review. Just on that basis, this version has become a worthy addition to my collection.

In terms of the music, both the playing time and track length, and the talk of this being their most progressive album since Powerslave, was enough to generate a little curiosity.

Anyway, with Senjutsu debuting towards the top of album charts around the world, many of you will already have come to your own conclusions. However, having had the time to live with this album for a few weeks, here is a quick run-through of Senjutsu to help any readers with a love of progressive metal to decide whether this new Maiden offering is worthy of further investigation.

Or, in other words, how progressive is the metal of Maiden in their 46th year?

The easiest way to evaluate Senjutsu is to treat each CD separately.

The first CD is the one I am enjoying the most, as it offers an excellent blend of styles and compositional formats. The songs are shorter. It's the mix of influences and the use of some "new" influences that makes it "progressive".

Two songs can be enjoyed as classic Maiden and both and are among the best songs that the band has written in the past 30 years.

Stratego has that familiar galloping riff and a great hook. Some different patterns in the closing third keep it from becoming predictable. At a mere four minutes, Days Of Future Past is short and to the point, with a big nod back to The Trooper.

Dramatic tribal drums open the album, with its lengthy title track. However, size isn't everything, and in terms of the song-writing this song is very much a case of being "grandiose" and "epic", rather than "progressive".

The remaining three tracks on the first CD are definitely pushing the band's boundaries.

The Writing On The Wall was one of the first video-singles. The lovely acoustic-led guitar phrase that opens the track, and is present throughout, is the first time I recall the band utilising a "Suvvern" vibe. If Dickenson could muster an American accent then this could be mistaken for a Lynyrd Skynyrd cover. Again in the final third, the groove morphs into a celtic vibe where I am reminded of Gary Moore in his metal period.

By most definitions, both the remaining long tracks are progressive-metal songs.

Lost In A Lost World opens with a certain Jethro Tull-vibe in the semi-spoken vocals, over strummed acoustic guitar, over a sustained keyboard and 60 harmony vocals. It's very retro. The riff that follows is also unusual for Maiden. Dickinson keeps to his lower range for the verses. The higher pitch is saved for the Maiden-esque chorus. Here the guitars switch intriguingly between a celtic groove (Thin Lizzy, Gary Moore) and a heavy, rocking Tull. You really do not know where this song is going to go next.

The final third of the track is again different, with its spacey ambience over a clear environmental message. Dickinson's vocal is mirroring a simple guitar melody, with the bass doing its own thing over sustained keyboards. It's again not overly-complex but certainly different.

Just vocals and sustained keyboards open The Time Machine. There is a very 70s retro feel for the opening verse. It's hardly even metal. Think early Uriah Heep mixed with a bit of Deep Purple and Zeppelin. Maybe even some Pink Floyd. At the halfway point things speed up with another celtic guitar run. Two thirds of the way through we get a bit more technical, with a nice staccato bridge and some twin guitar soloing. A Tull-esque guitar and a vocal refrain, over plucked guitar bring the song/story and the first CD to a close. This is multi-phase song-writing à la Rime Of The Ancient Mariner. Dickinson's air-raid siren vocal keeps it distinctly Maiden.

The second CD is very much a different beast. While the first hinted at some progressive influences and offered several longer tracks, the abundance of the standard Maiden song-writing tropes and accessible hooks should keep long-standing fans happy.

Possessing just four extended compositions, the second CD places its progressive cards firmly on the table. With three of the four tracks passing the ten-minute mark (all written by Harris), the prog exists chiefly in terms of the long-form, multi-part song-writing. Maiden has of course done this before, but never to this extent. The band makes full use of its three guitarists, with extended instrumental sections taking up a fair chunk of the 41-minute playing time.

Darkest Hour is a slow, broody opener. Personally I adore the bluesy flow to the central guitar solo(s). Elsewhere, there are clear nods to certain prog artists. The lighter sections that superbly bookend Death Of The Celts could be seen as a homage to Jethro Tull (think Farm On The Freeway). The extended central instrumental section, with a pick-'n'-mix of monster riffs, is probably the most excessive in the Maiden catalogue.

As Dickinson puts it with The Parchment: "If we perform that song live, I'll be round the back having a glass of non-alcoholic water. I get a five-and-a-half-minute tea break in the middle of that song."

The album and these four songs in particular do require some work on the listener's part. It's a varied and often multi-layered body of work that requires a concentrated approach when listening. 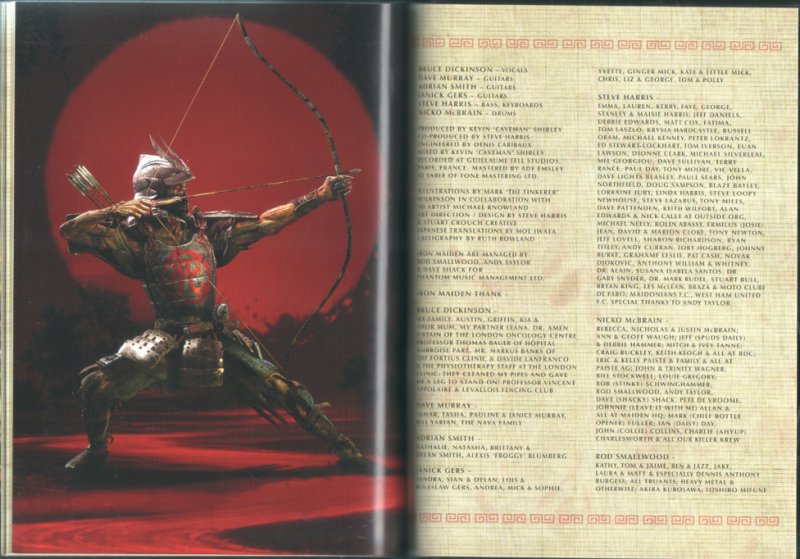 However, Bruce Dickinson is now 63 years old. Nicko McBrain will soon become a septuagenarian. Here in France, every band member would be classified as an old-age pensioner! Things have slowed down in the Maiden world. They are performing within the constraints of many years on the world's stages and in its studios.

Select your favourite progressive long song from this album, and then listen straight away to Rime Of The Ancient Mariner or Seventh Son Of A Seventh Son or Alexander The Great. You don't need me to point out the obvious.

Iron Maiden have always had progressive influences, and since their self-titled debut, their albums have always featured songs that can be classified as progressive metal. Senjutsu continues that tradition but is notable for the extent to which the songs feature new and differing influences and the extent to which it mostly features "epic" tracks.

It rarely reaches the heights of PowerSlave or Seventh Son... but there is more than enough here to warrant the interest of those who like some prog with their metal.

I've really enjoyed getting to know this band again. Above all else, one has to admire Iron Maiden for their continuing ambition and desire to explore, evolve and venture into new areas. Few bands of their vintage have remained so relevant and respected.