Laura Meade — The Most Dangerous Woman In America 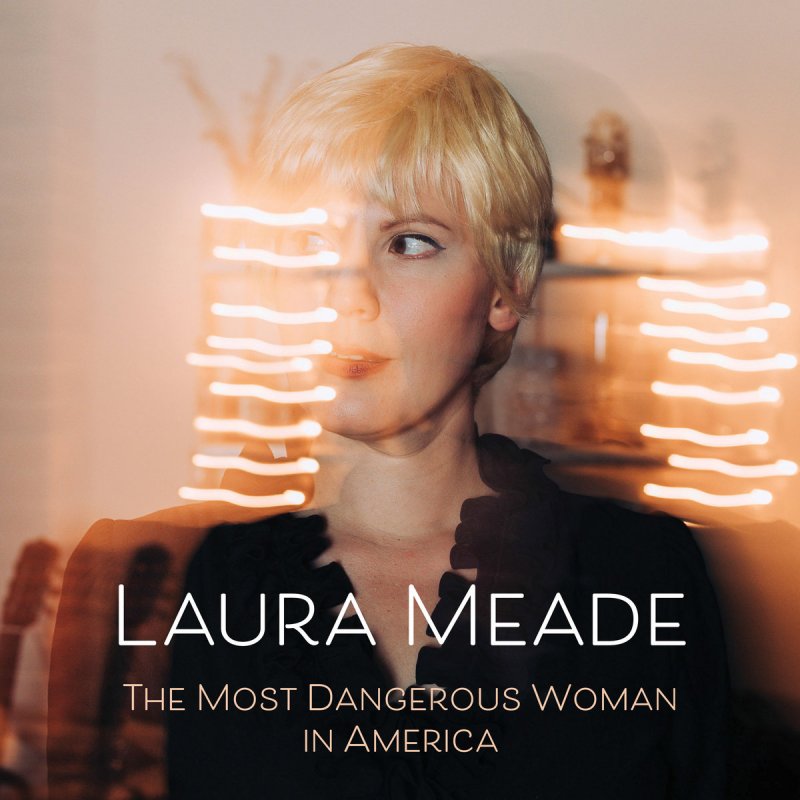 The political engagement is embedded in the album's overarching theme of the historical mistreatment of women, to the ongoing exploitation and harassment women experience that lead to the #metoo movement. As Laura Meade says, she hopes: “That this album, in some small way, honours and gives-voice to the forgotten [women] ... those whose stories remain untold, whose lives have been neutralised by those with unchecked power.”

Now this description may make The Most Dangerous Woman In America seem a little dour, but the critique is delicately poetic. The issues explored are wedded to some exquisite musical settings and ear-worm melodies. The message tends to emerge, rather than dominate the proceedings.

The music is a fabulous mix of progressively-inventive art-rock, and electronica. As you can see from the credited musicians, the music here is keyboard-heavy and used in such a way that I didn't miss the guitars at all.

The sound palette is, in the main, driven by percussive but melodic piano lines, anchored by prominent bass. Electronic percussion skitters, and the synths sweep in and out. This palette comes into play straight away on Leaving's tale of an actor exploited by the male movie machine, as they end up part of 'a Kodak moment crime'. An energetic and melodic opener, with Meade's superb vocal alternatively floating and diving, ultimately driving the song forward.

As with IZZ, she embraces progressive-pop style earworm melodies. The prime example on this album being the unforgettable melody of Burned At The Stake. It is spread across her multi-tracked vocals as she dips into a beautiful melancholy, singing 'sirens in the city, sigh my name'. There is a lot packed into this sub-three minute track including a whiz of a synth solo. Don't be put off by the songs' running times, there's something new to discover every time you play them.

The majestic piano ballad opening of Iconoclast grows in intensity as Mellotrons enter, and it has another killer melody. More progressive-pop comes with the melody of the excoriating End Of The Road In Hollywood. The song narrator's bruising lyrics ('He used me up and spit me out. I swore he would never hurt me again.') are set to forceful keys and off-the-beat electronic percussion that never lets the ear find comfort; as the song's subject matter demands.

The classical and upright overstrung pianos of the resigned Doesn't Change A Thing take a darker turn into the territory explored by Depeche Mode in their early 90s heroin-gothic phase. The tension is alleviated by the surprise addition of harpsichord, as the song strives for the hopeful. The musical arrangement here is brilliantly unpredictable.

The title track explores all facets of electronic progressive art-rock that includes, as well as piano, pounding drums, sequencer-driven synths, deliberate distortions, more harpsichord and a short-but-fab synth solo. These all back solo and multi-layered vocals, where Meade fully explores her voice's broad range. At the same time it is expertly arranged, and it revisits refrains from earlier on the album, giving it a rounded completeness.

There is a fierceness on show here as well. In both The Shape Of Shock, where it mixes with the gentle, and on Forgive Me's bludgeoning drums and a defiant, dramatic arrangement held together by Meade's terrific vocal. The album then closes with the all too brief Tell Me, Love's dominant synths, once again re-stating earlier themes, so bringing the album to a more-than-satisfying conclusion.

Laura Meade's The Most Dangerous Woman in America is a fabulous album of electronica-infused progressive art-rock, prog-pop and all-round superb song writing and performances. The contrast between Laura Meade's warm, passionately-alluring vocals and the cool electronica, reflects the personal engagement with the downbeat political world women find themselves in. This is an album to savour and revisit.

To fall back on a very old cliché: Laura Meade's The Most Dangerous Woman in America is all killer, no filler.

IZZ vocalist Laura Meade's new album, explores the story of a woman whose voice was silenced and whose story was all-but-forgotten by her own country, although the story told can be expanded to include all of those who stay true and stand up for what they believe in, regardless of personal cost.

The first significant thing one notices about the album is the dramatic change in Meade's image. From the slightly demure, dark-haired person staring out from the cover of Remedium, to the more visceral, cropped blond hair on the latest release. To tell the truth I hardly recognised them as the same person. A result of lockdown perhaps?

What hasn't changed though is the quality of the music, which, primarily because of the lack of acoustic drums, has a more electronic feel to it; although don't think it is all beats and bips! The standout track is immediately obvious, the hauntingly lovely Iconoclast, which focuses mainly on a piano and Meade's wonderful vocal performance. The supporting synth melody enhances the song with its repeating, lilting air. Similarly, Doesn't Change A Thing could easily crossover into mainstream musical consciousness.

As with all good concept albums, which this surely is, there are musical and lyrical themes running through the album, the most obvious being the incorporation of parts of the chorus of Burned At The Stake in the excellent title song, as well as the refrain of said title track in Forgive Me. This is the most upbeat and energetic song on the album, with the insistent electronic beat neatly contrasted by the piano and Meade's more restrained and calming voice. The final track, Tell Me, Love also reprises several of the themes heard on previous tracks.

The use of guitar throughout the album is rather minimal, and undoubtedly all the better for it, as it allows focus to be drawn to the lyrics and vocal arrangements and the piano, which in contrast is heard prominently on each of the songs. The album contains no solos per se but is replete with melodies and the compelling vocals, which are superb throughout, but no more so than on Burned At The Stake. The strength of the album is its inherent simplicity. The quality of the song writing is key, and somehow the electronica additions give the album a completely fresh feeling.

Somewhat unusually, I find Laura Meade much more exciting as a solo artist than with the arguably more well-known IZZ, a band who I have listened to over the years but have completely failed to connect with. Based on The Most Dangerous Woman In America, Meade could easily transcend from being one of the vocalists in a niche prog rock act, who has released a couple of solo albums, to a genuine solo star that also happens to lend her talents to a relatively unknown band.

This is an extraordinarily good album by being genuinely fresh and original. Even at this stage of the year, The Most Dangerous Woman In America is likely to feature strongly in lists of favourite albums of the 2021 with Iconoclast being an absolute contender for song of the year. Yes, it really is that good!