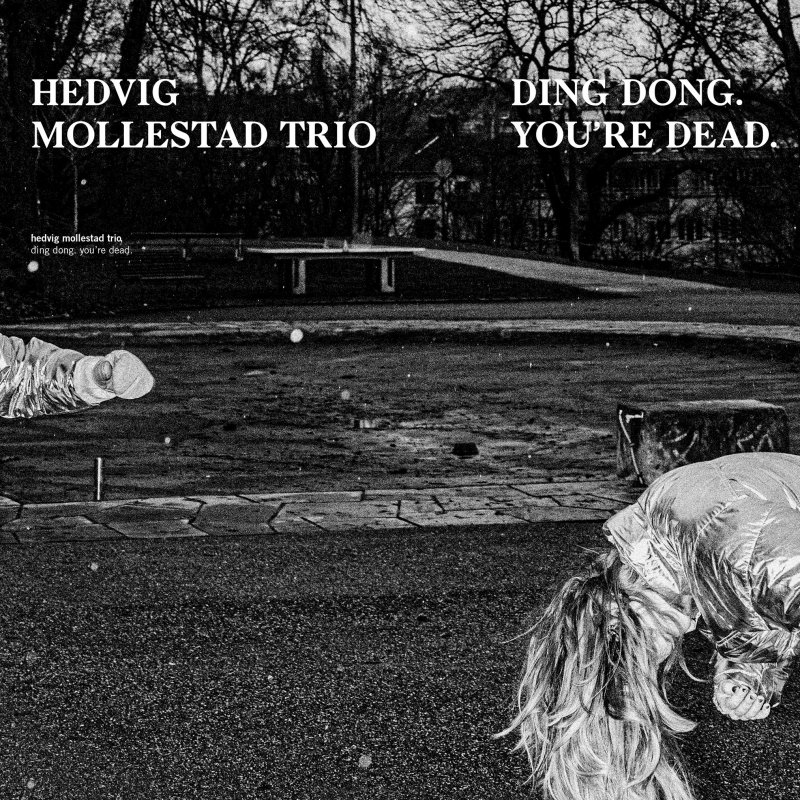 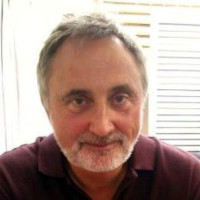 The title, Ding Dong. You're Dead., reads like it could belong to some perverse nursery rhyme, or some throw-away B-movie.

When listening to the album, it was soon apparent that nothing could be further from the truth. This is a release that sharpens the senses and reawakens things within you; things that you might have thought were long dead or forgotten.

Sometimes the inner rocker that lies within you, just has to be released.

With red-faced enthusiasm, I don my sweat-patched leather jacket, and truss my expanding paunch tightly, with the help of a dangerously-stressed studded belt.

The disc spins, and as it gathers momentum for a brief moment, memories of my youth swirl by. Booted-feet locked on an ale-stained, glue floor. Bunched gentlemen, smoking, slurping, consuming and coughing in darkened corners. Eyes furtively glance towards the stage.

Then, a startled, wild-eye blink, created by a ready rock riff. Its resonance bends and shapes the air. In a mistimed flurry, clenched fists miss the beat and awkwardly pump upwards. The band plays their snarling part. A blurry, white-toothed spotlight; the light of the shadows. The vortex vibrates the floor. It pulses, pounds and quivers the hair. Chests wobble. The bunched gentlemen disengage; unlock their feet and bend and shuffle, like gale-twisted ears of corn swaying frantically in the throbbing musical storm.

The first two tracks of this body-shaking album make no tardy apology for their assault upon the senses. These convulsing tunes puff and huff with spitting aggression. They are hot-blooded and surge with action. In their muscular approach, there is no requirement for airy-subtlety nor elegant melody to get in the way.

However, even though they are brash and unforgiving, there are many more facets to these compositions than a superficial exposure to them would initially suggest. The distorted bass that features in Leo Flash's Return To The Underworld is just fantastic.

Leo Flash's Return To The Underworld and All Flights Cancelled are just the right sort of antidote to take, if just like me, you have recently been subjected to an endless shuffle of the soundtrack of the Sound Of Music and Julie Andrews' sweetly-sprung voice. Their exciting and exacting nature will definitely help to keep you from inadvertently humming "I have confidence" and blurting out "I have always longed for adventure." 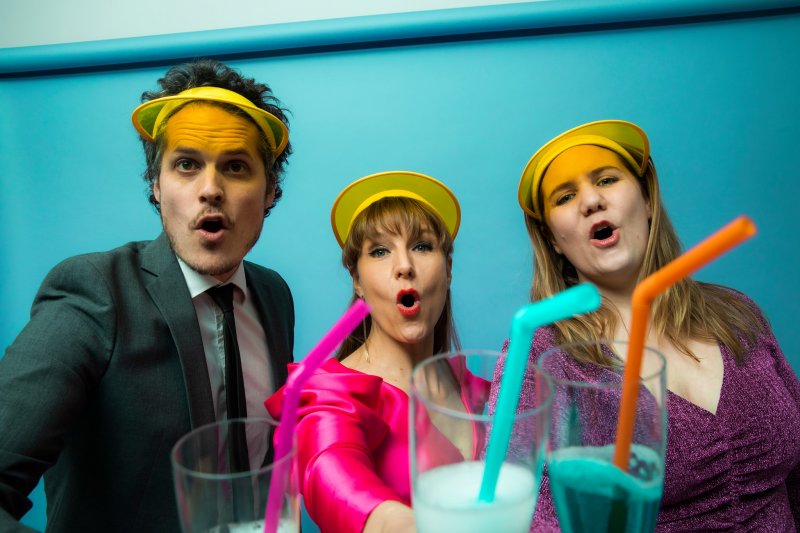 The Hedvig Mollestad Trio is made up of guitarist Hedvig Mollestad Thomassen, bassist Ellen Brekken, and drummer Loe Bjørnstad. They have perfected the art of mixing powerful rock riffs and virtuoso guitar solos, set against complex time signatures. The trio's approach combines the freedom of expression and skills of invention and improvisation, that players steeped in jazz are able to bring to the table. Added to this, is a gruff, in-your-face approach that is a hallmark of some of the best examples of hard-hitting rock.

The trio's progressive fusion of styles is totally captivating and it is hard to ignore the manner in which they tear-up the rule book and bludgeon the senses. This is a band that fully deserves to be called a jazz-rock band. In Hedvig Mollestad's case the word 'rock' should be written in bold, highlighted and underlined

Ding Dong. You're Dead., draws upon the style developed by the trio in Smells Funny and takes that approach to another level.

When comparing the trio's latest release to Smells Funny there were again a number of times when the style of both King Crimson and Shawn Lane were brought to mind. Although Ding Dong. You're Dead. is, for the most part, a forceful affair, some of the tunes, or at least sections within a composition, add a set of different colours and tones to the mix.

Four Candles has a range of subtle flavours and is much less tart than the sharp ingredients that give the other compositions such a kick. It is gently seasoned, with a sparse beginning, sprinkled with harmonic effects and excellent kit work. This meandering and haunting tune sticks in the memory and is one of the few occasions when the music is given a lot of room to breathe. It's probably my favourite piece on the album. It's certainly the easiest on the ear and as a result it possesses a strong, emotive pull.

Four Candles is a wonderful tune and a fitting way to bring the album to a close. It helps to provide a restful respite from the energetic excursions that dominate the other pieces.

The engaging acoustic bass of Brekker is a feature of the opening section of the eye-popping Magic Moshroom and her atmospheric and inspiring bowed work in the album's title track provides it with a mysterious, spacious feel. In this piece, the squeaks, howls and yowls of the bow are perfectly complemented by the use of harmonics 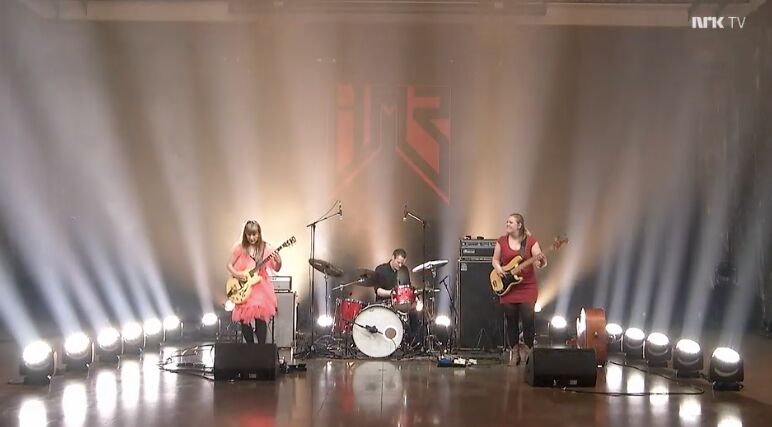 During the title track, Mollestad's choice of tone is reminiscent of something Hendrix employed in Pali Gap. This type of tenuous comparison only made the whole experience even more enjoyable. There are arguably a few other occasions when Mollestad employs something akin to the power and fiery-abandon that was a trademark of Hendrix's style, but for the most part her playing has a more sophisticated edge. During the course of the release, the right choice of tone, the precise use of dynamics and volume have just as important a part to play, as power and speed.

Grimbl touches the senses in so many ways. Straight-forward, ear-rattling sections reminiscent of Norwegian guitar rockers Plankton are juxtaposed with free sections that reach-out intriguingly to explore a variety of different paths. In this tune, the trio is able to showcase their full range of skills and penchant for jazz.

One of the reasons why the album is able to have such an impact, is probably down to the way it was recorded. It has a fresh, live feel and it is obvious that the players have a great collective empathy. The rhythm section work so well together; they hold things together and stir the pot with great aplomb. They provide Mollestad with a great platform for her to showcase her extraordinary, virtuoso guitar skills.

Her playing reaches places that can only be imagined. Each gift-wrapped and hand-picked solo is like a signpost on a route towards a lofty pedestal in a guitarist hall of fame. There is so much superb guitar playing to discover in this album, that I could easily listen to Mollestad's mesmerising contribution over and over again at a volume that would not be not sensible for the health of my hearing.

Ding Dong. You're Dead. is undoubtedly one of my favourite albums of the year. It offers a great contrast to much of the more sedate music that I usually listen to.

I guess it's time to put that sweaty jacket on, breath in, tighten the belt, and prepare for the trip again.

And what a trip it is!