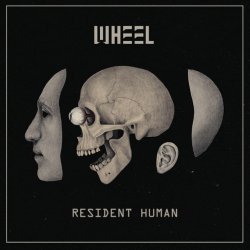 Two years ago, Anglo-Finnish prog-metallers Wheel turned a lot of people to their cause with their debut album Moving Backwards. I was lucky enough to catch them on its release, with a hearty recommendation of the album on our Something For The Weekend blog as well as seeing their highly impressive live show when supporting Soen in London. Moving Backwards easily made my list of the Top 25 Progressive Metal Albums Of The Decade.

Resident Human has been my most hotly-anticipated album of this year. It is a natural successor to the band's debut, and it does not disappoint.

It is an album of our times. Not so much a Covid-concept album, but the down-time of confinement has clearly given musicians (amongst many others) an opportunity to look at the world beyond their daily schedules, and reflect on where they are in their lives and the wider world. Lyrically Resident Human shows a band with something to say. Musically and lyrically is pretty dark, but not in an unoptimistic way.

Two of the songs are based on The Hyperion Cantos, a series of science fiction novels by Dan Simmons, but Wheel are also prepared to dissect the difficult; the complex. Movement is about the killing of George Floyd in the USA. Fugue explores the shared experience of living through a pandemic. Ascend observes the copy/paste culture encouraged by online media, and how such communication misses out on personal nuance and reflection.

Musically the album is an accessible mix of short, direct songs, and longer-form compositions. Movement is the most instant of the shorter tracks. The wonderfully rolling, jarring riff sits comfortably with the style of their debut album. The eruption of the guitars at the end is memorable; as it the vocal hook.

Ascend is a more groove-ridden number. The initial guitar rampage breaks into a calmer verse before erupting once more. There's a certain Fates Warning style to be enjoyed here. Ascend is also pretty raw. It's where you best encounter how the band has tried to avoid the temptation of over-polishing their sound in the editing suite.

Fugue is welcome in its difference. The riffing is set aside, for a more delicate use of the guitar. It offers a touch of Porcupine Tree and Anathema, mixed with Karnivool and Tool. The only complaint is that the mood created and the strength of the melody, deserves longer exploration. At nearly 12 minutes Dissipating is the perfect opener. I love and admire the way it builds oh-so-slowly from its melancholic opening, to the table-thumping energy of its climax.

Hyperion is where I get the big Karnivool vibe. There is some stunning bass-work here and the guitar lines are fabulously-gorgeous. The rhythmic sound-scapes that Wheel have created on this track are world class. The instrumental section after the eight-minute mark suggests this is a band that could easily incorporate new styles as their career evolves.

I must also add that the drum work is sublime here, and throughout every track. So much variety, and never overdone.

The final long-song is the title track. It is my favourite. It's not an instant hit. One needs to go with the flow and let its complex weaving of crunching Tool heaviness and Karnivool melancholia take you on its roller coaster of dynamic highs and lows. Then, just as you think the song and album has run its course, from out of nowhere a blistering riff hits the jackpot!

One more thing to say about these three tracks; none of the long songs ever seem that long. That's a good thing.

The gentle, closing Old Earth is more of a coda, offering a much needed pause of breath as the curtain slowly falls.

Whereas Moving Backwards was a collection of brilliant songs and performances, I find that with Resident Human the listener is being presented with 'an album'. Whilst all the tracks stand happily on their own, their impact is greatly enhanced by being listened to as a collective. There is a measured journey being made here; a human-scale story being told through music and lyrics. It is a journey that any fan of modern progressive metal should be happy to undertake.

With Resident Human Wheel have established themselves as one of the leading progressive metals bands of the 20s. I think this will be my album of the year.

Here's a video for one of the longer songs.