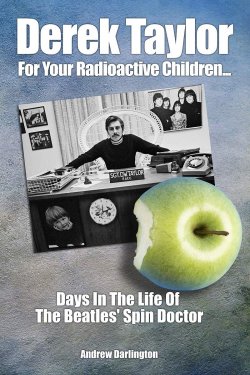 There is no doubt that Derek Taylor had a significant role throughout the life of The Beatles and also played an important part in promoting several West Coast American bands, particularly The Byrds, in his native country. He is worthy of a biographer's attention. But is Andrew Darlington up to the task?

Overall Derek Taylor For Your Radioactive Children... (what's with the radioactive children? The reference is not explained) is somewhat of a train crash of a book. The most obvious criticism is that it is in desperate need of the attentions of an editor. There are long passages describing events that conclude with a statement such as "Derek wasn't there" or some such comment. Indeed for large chunks of the book, Taylor is either not mentioned or is a minor, peripheral character. There is no real consistent story and very little insight or in-depth exploration of the character of the subject. The book offers very little new information that isn't already widely known.

Some strict editing would not only have pulled things together by 'eliminating' much of the 'extraneous text', tightening 'the narrative' and questioning the excessive use of inverted commas, the function of which is not at all clear. Are they meant to be quotations? Obviously not in every case but what about the rest of the time? No idea. And starting sentences with a conjunction, although not as heinous a crime as many grammarians once considered, is rather lazy, when it occurs too frequently. One also has a problem forgiving the consistent use of the Oxford comma when it is not warranted in a text written in UK English.

There is also a lot of repetition. How many times does one need to be told that Taylor was responsible for ghost-writing the Brian Epstein biography A Cellarful Of Noise? And why are the Rolling Stones always referred to as the rolling Stones? Again, proper editing would have eliminated the sometimes spurious use or omission of capital letters.

Of the 47 photographs in the middle of the book, only seven actually feature Taylor, five of which are with assorted Beatles, whereas 29 of the remaining pictures are purely related to The Beatles. It is unforgivable to misname The Beatles LP as The White Album, as if that was the official title, even if that is the name by which it is frequently referred. There are also a few other factual errors that could, and should, have been checked and rectified before printing, as should the table of contents which inexplicably omits Chapter One.

So plenty of niggles that detract from the enjoyment of the book. A more concise effort, with greater focus would have been a better approach. As it is, I finished the book having learnt very little about Derek Taylor the man and made all the more frustrating by the fact that for large chunks, it was easy to forget that he was actually the subject of the book. 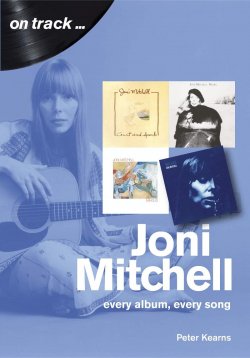 Joni Mitchell may have limited prog-rock credentials but during the 1970s her albums were essential listening, regardless of musical preferences. Although I lived on a staple diet of prog in those days, the 1975 The Hissing Of Summer Lawns album is one of my personal favourites from the period. Fish was similarly smitten, when a decade later, he adapted lines from the title song for Marillion's Lavender (which isn't mentioned in this book). When Joni started out in the 60s, her acoustic songs were inevitably tagged as "folk", but over the years she's embraced various styles including world music and jazz.

Author, journalist, musician and producer Peter Kearns hails from New Zealand and has two previous On Track books to his credit; on Elton John and 10cc. At 158 pages, plus a 16 page colour section, this is one of the longest books in the series and discusses all of Joni's studio albums up to and including Shine from 2007. This is followed by a single page Epilogue, which brings things almost up to date. I say almost because the book was completed before the October 2020 release of Archives – Vol. 1: The Early Years (1963 - 1967) therefore missing out a good deal of previously unreleased material.

Unlike many books in the On Track series, separate chapters listing live recordings and compilations are not included, although these are referred to in the general narrative. For American artists of a certain vintage, orchestral re-recordings of familiar songs have become very much in-vogue of late but Joni was ahead of the game. Accordingly, individual chapters are dedicated to the Both Sides Now and Travelogue albums from 2000 and 2002 respectively.

Kearns is clearly musically literate, with an almost academic approach when discussing the music with references to tritones, keys and chords. This will undoubtedly appeal to the serious musicians out there, although fundamental aspects of the songs like melody, mood and tempo are sometimes sketchy. Instead, the lyrics and the stories behind the songs are the main focus of attention, which is not surprising given Joni's often autobiographical approach to her song writing. To support his analysis, Kearns includes extracts from the lyrics for many of the songs.

This is a book that will appeal to Joni Mitchell devotees who will appreciate Kearns' analytical approach and erudite writing. Even die-hard fans may discover something new about a favourite song that may have otherwise passed them by. As such, it's recommended reading. 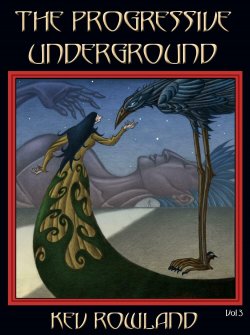 After reviewing Volume 1 and Volume 2, I was very much looking forward to the final book in this series, and it should be no surprise they all have the same rating. Perhaps we should have reviewed this as a series? There is hardly anything to add that I have not said before.

Besides finishing the alphabet from T - Z, this last book contains reviews of books, magazines, various artists samples, interviews, and videos and DVDs.

As I have said before, the reviews are published in alphabetical order, so there is no chronological flow to the discoveries in Rowland's writing style. That of course was never the goal of these books. The subject was never Rowland himself. The goal was to provide you with a treasure of reviews, on a treasure of progressive rock music released in the 1990s and 2000s.

Given the fact that quite a large section of the reviewed albums are by bands that no longer exist, it's also saving a piece of history. That alone makes this fun to read, and great to have. Getting re-acquainted by jogging the memory resulted in a few rediscoveries, like Vulgar Unicorn. I had the first CD but now I know that two more followed! But I also discovered a few bands I had never heard of, which is the real beauty of having a book like this that was written in a time when a lot of bands didn't have the distribution that seems so easy now. I have to go back to a great time of discoveries to discover even more!

When reading a certain magazine or website long enough, you are learning the opinions of the writers. Having everything by a single reviewer gives you a very short learning curve. Already with the first book I learnt I have a large overlap in taste with Rowland, although our tastes might have shifted into different directions in later years. I love to see how we agree on the superbness of Timothy Pure and find it amusing to see how we differ when listening to Transatlantic (or at least at the time.)

Rowland and I share a love for Twelfth Night, and I although I've read many TN reviews over the years, it's a delight reading some more here from another and always slightly different perspective. As is the case with many other reviewers, the reviews tend to get longer when Kevin gets more enthusiastic. And they should! It is also nice to see several of the band's official bootleg releases get coverage in here.

I like Rowland's writing. It's a quick, good, and fun read. He's always trying to avoid repeating himself, and clear. When he doesn't like something he tells you why. And although he doesn't use ratings as we do at DPRP, you can tell what score he might have given from the text. It's part of getting to know a reviewer's taste, so from a certain point it actually tells you something, whether the reviewer likes an album or not.

A very fine collection and not even just for the contents, I think the trilogy of beautiful paintings by Martin Springett makes this an excellent collection to have on the shelves. 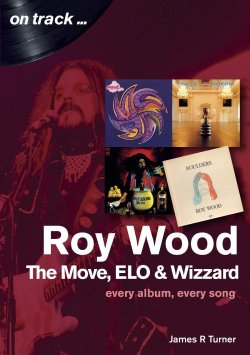 Despite a slow start to the year due to the on-going impact of the coronavirus, Sonicbond Publishing rounded off 2020 with a host of publications in their On Track series. This latest, charts the career of one of the UK's most talented songwriters/musicians, Roy Wood. During the late 60s and early 70s, he maintained a constant presence on British radio and TV music shows thanks to chart success with The Move, Electric Light Orchestra, Wizzard, and solo. His songs have been covered by numerous artists, some more credible than others including Marillion, Magnum and Kaiser Chiefs.

The author James R. Turner discusses the albums chronologically, although Wood's solo output of the 70s and 80s are covered in a chapter separate from his work with Wizzard and Roy Wood's Wizzo Band during the same period. There is also a good deal of emphasis placed on the singles which is understandable given Wood's success in this area. In 1972 alone, he sang on three top ten UK hits, which isn't unusual in itself but in Wood's case it was with three different bands; a unique achievement.

Unfortunately for Wood, he was associated with the UK glam-rock scene which fell out of favour by the mid-70s. Singles like See My Baby Jive and I Wish It Could Be Christmas Everyday were huge successes but their novelty 50s-style, synonymous with acts like Alvin Stardust, Mud and Showaddywaddy deterred discerning music lovers from Wood's solo and Wizzard albums, which sold poorly. He was a master of genre-hopping and although I've always considered the debut ELO album to be the most progressive that he was involved with, Turner makes a convincing case for the prog-rock credentials of the Move album Looking On (1970) and Wizzard Brew (1973).

Despite the occasional grammatical and typo error, Turner has clearly devoted a lot of research and listening time in preparing this book and there's no doubting his enthusiasm for the subject. He has a tendency to repeat rudimentary adjectives such as “great harmonies” and “fantastic guitars” but he gives a clear and detailed description of each song, which I really liked. He concludes the book with an “Appendix” devoted to Jeff Lynne's pre-ELO band The Idle Race which is an odd choice considering Wood was not involved.

You don't have to be a fan of Roy Wood's entire output to enjoy this book but it probably helps. Like me, you may find it enlightening and gain a better appreciation of Wood's talents as a songwriter and musician. Although he still performs to this day, surprisingly it's been more than 35 years since he last recorded an album of original songs. Although his friend and musical collaborator Jeff Lynne is also discussed, ELO fans should note that only the debut album is included, after which Wood departed to form Wizzard. At 122 pages, plus a 16 page colour section, this is one of the shortest in the On Track series but I've been encouraged to seek out some of Wood's less familiar songs. I can't think of a better endorsement than that.