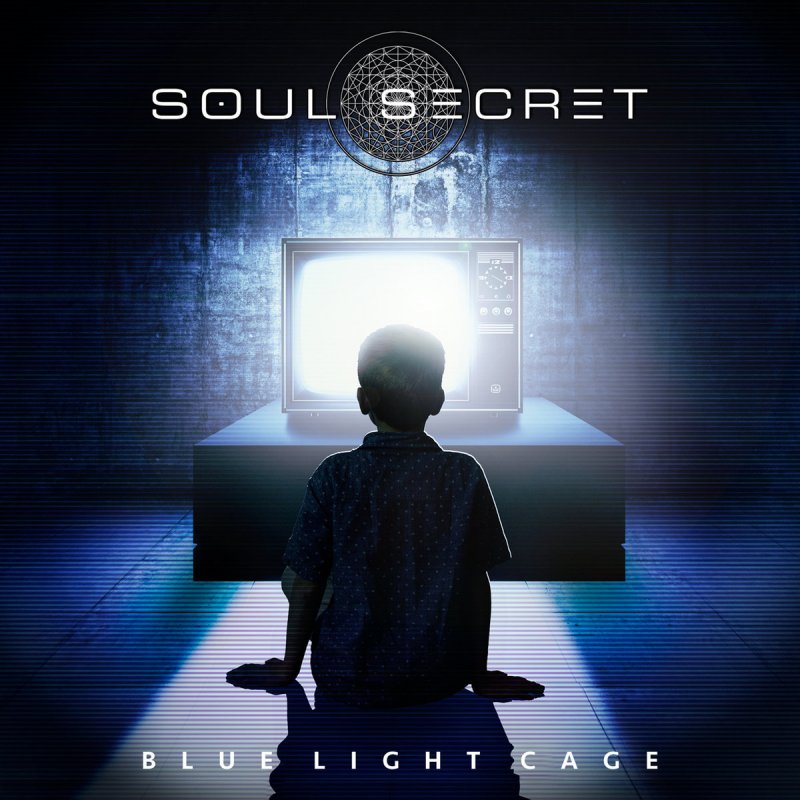 The last time I encountered Soul Secret was in a live setting, opening for Vanden Plas at P3, Purmerend (Holland) in 2016, supporting their recently released third album 4. A solid performance, where their engaging progressive metal and new vocalist Lino Di Pietratonio left a very good impression. Somehow their 2017 album Babel escaped my attention, as well as DPRP's, so when a new album was announced I was curious to find out what kind of progress the band had made in the past few years. As it turns out, quite a lot.

Prior to its arrival, I was actually speed-reading Jordan Blum's On Track... book on Dream Theater, which had me lingering to listen to DT's iconic Images & Words album once again. Soul Secret's Blue Light Cage has however solemnly prevented this from ever happening. And the reasons for this are multiple, with the easiest one lying in the fact that Soul Secret doesn't make a secret of finding their main influence as Dream Theater. Similar to a band like Course Of Fate they wear this influence with pride. And it gets better, for the former Dream Theater cover-band predominantly find their inspiration in the Images & Words era, a milestone album that I hold in very high regard.

Having disconnected with Dream Theater shortly after Awake, emphasising too much on technicalities for my taste, it's the refreshing, passionate appeal of Blue Light Cage that completely restores my faith towards this tantalising style of progressive metal. Next to divine keyboard/guitar interplay, odd time signatures and a multitude of enchanting melodies, Soul Secret also manage to successfully channel emotion and passion through their versatile compositions. Subsequently they have found their own sound that incorporates influences of jazz and classical, and even capitalises the F in Funk.

Like their previous two efforts, Blue Light Cage involves a concept, this time based upon today's society. A modern-day civilisation in which we think we partake, yet in fact only follow the achievements of others from a sideline. It addresses general topics like working life and personal inner struggles, as well as subjects like 'fake' news and mass media influences. Relatable subjects, which through its autobiographic lyrical nature, show a confident contemporary identifiability.

The concept is off to a flying start via the majestic instrumental opening sequence (Opening Sequence), which is probably the best opening sequence I have heard in the past 23 years, ever since Fire Blossom by aforementioned Vanden Plas. So good, I have to name it thrice, as it's catchy, hook-laden with riffs, dynamic and radiates a contagious groove and drive surrounded by those relentless guitar/keyboard flirtations I've come to love so much. Refrained from any egotism, the excellence of the interplay is equally appealing, while the thriving and versatile rhythm section of Claudio Casaburi on bass and Antonio Mocerino (drums/percussion) amicably pulls me under (ED: I see what you did there!) through its ravishing vivacity.

It is enticingly followed by the energetic The Ghost Syndicate that sees a glorious guest performance by Derek Sherinian (ex-Dream Theater, Sons Of Apollo), elevating the joyous prog-festivities through two mesmerising synth solos. Its refined catchiness keeps me confidently Awake through playful changes strengthened by Pietrantonio's strong vocals, leaning towards those of James LaBrie. Keyboard player Luca Di Gennaro spreads many delightful textures and arrangements throughout, crystallising into many underlying progressive elements. This is only the tip of the iceberg, as his role on the album is substantial. 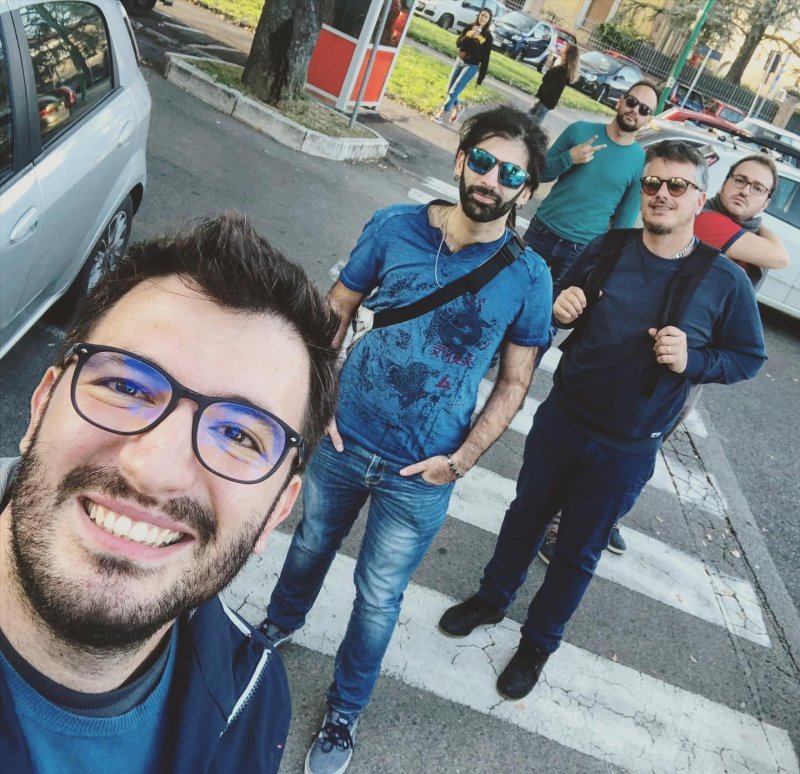 Through A President's Speech, Frank Zappa's question of "Does Humor Belong In Music?" gets a most rewarding affirmative answer. It also marks the first occasion where Soul Secret spread their wings and lift off from the Dream Theater-realm into their own. Initially still gliding in Images & Words territory, with playful rhythmic interaction and flashy synth insertions, it all changes after the bridge, when a fake-news-anchor (Tom Gallagher) comments on odd time signatures and boldly states that the president's speech has been "instrumentalised". The entertaining heavy and complex instrumental coda that follows, is smile-provokingly filled with these exciting odd time eruptions, and even sees gracious insertions of infectious swing jazz alongside groovy djent-riffs and fierce playing from newcomer Francesco Cavezza on guitar.

The subsequent short reflective Switch On, a soft interlude build upon extremely low basslines countered perfectly by tasty jazzy bass pickings that gives it a breezy lightness, then leads into the heavenly surroundings of the title track. A beautiful composition which oozes sublime feelings of Dream Theater's Another Day through the alluring soprano sax melodies from Marek Arnold.

One could argue it's a step too far in its tribute, but the way it's done is sheer brilliance. The acoustic guitars entice, as do the emotional vocals that also bring distinct memories of Lemur Voice. With a melancholic guitar solo taking control and slowly towering over the restrained melodies, it gives seriously heartfelt goosebumps. Next to this, the gradual build up of the song is superb, just as its soothing ending mounts slowly on piano/sax conversations.

Opposite to this nostalgic feel, We'll Become Dust shows a contemporary atmosphere, embracing the complexities of Rendezvous Point. Despite the crystal clear production, here the Italian spoken word section by Joe Prestia is slightly inaudible and some of the concept's message loses its strength.

Jump Right In, reminiscent to a jolly Moron Police act, is another highly accomplished track. Lots of swirling keys and frivolous melodies quickly interact, while rhythmic shifts interlock perfectly with the vocal lines. Feelings of A.C.T. start to reconnect, when a playful intermezzo excitingly glides into dreamy melodies that slowly transgress into funky salsa. Here some of Pietrantonio's spontaneous vocal lines are precisely met by musical arrangements, something Soul Secret manage to pull-off by the skin of their teeth. His enthusiasm does tend to get the better of him later on, but generally Pietrantonio's performance is truly outstanding.

The preceeding Going Home emits the same charming, uplifting feel with endless melodies dancing on a cataract of twinkling synth solos and accentuations. Thriving on a funky bass foundation and exalting drum partitions, slight images of a dainty Pain Of Salvation are transmitted in the poppy middle section. It's the polyphonic vocals, performed solely by Pietrantonio here, that are a perfect delight, igniting prog-rock sparkles of Gentle Giant, while Di Gennaro sprinkles generous layers of keys and luscious solos on top.

As the album progresses, Soul Secret's own identity starts to shine through more and more, culminating in the brilliant epic Breath And Recover. It finds personality through added electronics, djent-riffs, multi-layered intricacies and inventive melodies, making this final track flow through many precious atmospheric landscapes. The lengthy instrumental passage shows charming refinement, zapping through a concatenation of dreamy prog-metal, converging with classical symphonies, and surrounded by rhythmic modifications and several spine-chilling keyboard/guitar interchanges. The triumphant vocal-interaction with echoing effects is noteworthy, a strong feature that expresses an unique strength of the band.

Blue Light Cage has pressed me assuredly in my comfy chair, stereo remote control firmly in grip. A most definite contender for my top 10 year-list, which could equally be true for anyone craving some inventive progressive metal that sees an infinite array of creative ideas and flawless executions, much like the many references given. If this genuinely infectious and energetic effort doesn't gain them a bigger audience, I don't know what will. Thankfully I have finally worked out how to activate auto-repeat on my remote, for the Opening Sequence holds a highly addictive musical spell on me. Chapeau!