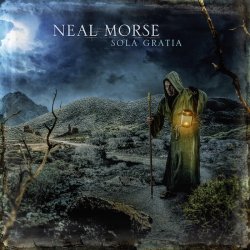 You've got to love Neal Morse. How can anybody keep churning out the same album, praising the Lord, time and time again and still manage to keep both atheists and prog-heads engaged, is nothing short of a miracle (see what I did there?). Now, before dismissing my previous remarks as being harsh or sarcastic, let it be clear that I actually meant them as a compliment. I for one am a firm atheist and a fussy proghead, yet I enjoy most of Morse's output, and in this regard Sola Gratia is no different.

While not on par with his best efforts, which in my opinion are the One (2004), Question Mark (2005) and Sola Scriptura (2007) trio of albums together with Transatlantic's Bridge Across Forever (2001) and the Neal Morse Band's The Similitude Of A Dream (2016), this latest effort is definitely better than things like Lifeline (2008) or Momentum (2012).

With Neal having delved into all kinds of formats including double albums, concept pieces and standard, song-oriented collections, this feels like an amalgamation of all these. Not being (yet) another double album is definitely an asset, as I found The Great Adventure (2019) to be a double album too many and I just couldn't get into Jesus Christ The Musical released the same year. In this regard, the relatively concise 65 minutes of Gratia works in its favor.

Intended to be a sequel of sorts to Sola Scriptura, I'd say it plays out more as a companion piece than anything else. It definitely feels smaller in scale and scope, not least because it's made up of shorter songs, as opposed to 20 minute epics. In any case, the structure of the album is pure Neal Morse, so there's a Preface, yet another inevitable Overture, loads of catchy, recurring themes and (you guessed it) a reprise of it all in the now mandatory grand finale. On the way, there's room for quite a few nods and call-backs to Sola Scriptura, which are naturally interwoven with the album's main motifs, and whichadd some welcome fluidity to the uneven, somewhat patchy pacing of the whole piece.

This might be the album's biggest setback, as its fragmentary-nature can break the flow here and there, which is the case with shorter tracks such as March Of The Pharisees or The Light On The Road To Damascus. Also, the last two songs, The Glory Of The Lord and Now I Can See/The Great Commission, if not worthless by any means, feel nevertheless strangely anti-climatic.

Having said that, the real climax comes earlier with centrepiece Seemingly Sincere, an exciting nine-minute rollercoaster where Morse gets to dabble with some nice electronic embellishments, while rocking-out in the style of previous belters like Author Of Confusion or The Truth Will Set You Free. This will likely become a live staple once gigs are (hopefully soon) resumed.

Elsewhere, other highlights include the beautiful ballad Overflow and the haunting Never Change, complete with a soaring Gilmour-esque guitar solo. If it's infectious, rocky tunes what you're after then In The Name Of The Lord and Building A Wall should do the trick.

The fact that this was written and recorded remotely during lockdown is what prevents the album from being a Neal Morse Band, which it probably is in all but name, given that all members lend their well-known talents to the proceedings, including some of Mike Portnoy's best drumming in years.

All in all, as predictable and occassionally-hackneyed as this might be, one can't deny Morse's energy and enthusiasm. Whatever you make of him, the entertainment value of his output is amazingly consistent.