Colour Haze — We Are 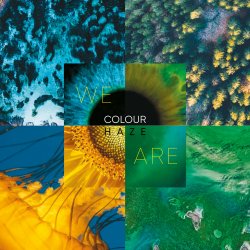 Colour Haze is very well known band in Germany but sadly not widely known in the rest of the world. Formed in Munich in 1994 they have released more than 12 albums and have gained a well deserved reputation as one of the most important underground bands in Europe. And that's precisely the problem, because these guys should be more recognised. I'm also guilty for that because I've often heard of them while listening and looking for similar bands, but never put much attention until I received their newest album called We Are.

First of all, although being on DPRP, don't expect a very progressive rock album here. Colour Haze are not pure progressive rock (if you use some of the more strict definitions), but they do have that 70s hard progressive feeling among their typical psychedelic rock sounds, plus krautrock or some jazzy touches and grooves. Also, don't expect a super-produced album because what you're going to find here is somehow an intended rough mix that works really well with the compositions.

As the band states: "All-analogue recording and mixing. No editing in the multi-track, recording or the mix. This music was really played as you hear it". This is not the first stoner or psycholdeic rock band doing this but I must admit, this time the band has made a very good decision, although some listeners may be expecting something different.

It makes no sense to describe all the songs in full but some ideas always help. The album starts with We Are, a clearly stoner psychedelic song. I can't avoid thinking of Masters Of Reality. The Real goes next and the progressive side appears as this almost-instrumental song keeps growing and finding very interesting guitars and synthesizers. Having incorporated a full-time man behind the keyboards has given the band more capacity to develop progressive passages; and that makes this album so interesting.

Life has become a personal favourite with its slow intro that incorporate very nice keyboards and a very psychedelic ending. Some Black Mountain here ... or is it some Colour Haze in Black Mountain?

Having an acoustic song with Material Drive was a strange choice. It's not bad but to me it is probably the low point of the album. However, having I´m With You following solves this. A great, long composition, again with soft initial parts and filling the end with stoner, melodies, clean guitar and keyboard.

Be With Me suprises the listener with flute and some Canterbury resonances. Don't panic, the groove is still there and it's a very good but different song. Freud III is an instrumental that any band of the genre would love to have. Just perfect to close this very interesting album.

I'm glad to have selected this album to review because I have finally given Colour Haze the attention they deserve. The band has released a great album, not repeating themselves after all these years and offering once again many reasons to be on top as one of the most important but unknown bands out there. Go listen, buy the album and enjoy the perfect mix of psychedelic, heavy, stoner progressive rock. And don´t forget to support the bands!