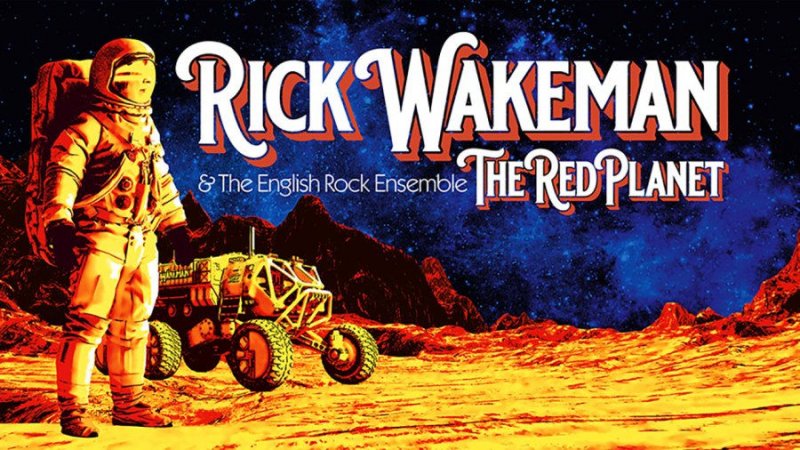 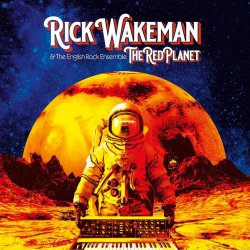 Not only is Rick Wakeman the most prolific musician associated with Yes, he is also one of the most consistent recording artists ever, with a staggering 80 studio albums to his name. This latest is cited as his first progressive rock album since Out There in 2003. To be honest, I never rated Out There as a prog album, sounding more mainstream hard rock to my ears. The Red Planet on the other hand is the genuine article.

As the title suggests, it's a concept album (what else from Rick) dedicated to the fourth planet from the Sun. Each of the eight instrumentals allude to a geographical feature of Mars. The cover artwork depicts an astronaut on the planet's surface armed with a Minimoog, while a robotic alien hovers menacingly in the background.

The Red Planet includes Rick's most colourful and flamboyant keyboard work for several years, harking back to his classic albums of old. He keeps it lean and keen as far as the band is concerned, backed by the trio of Dave Colquhoun (guitars), Lee Pomeroy (bass) and Ash Soan (drums). Colquhoun and Pomeroy are longtime members of The English Rock Ensemble and their association with Rick goes back many years. Soan is a session drummer of some repute having worked with Trevor Horn, Geoff Downes and numerous pop acts. Colquhoun had the distinction of being a guitar coach on the recent Freddie Mercury biopic 'Bohemian Rhapsody'. Pomeroy has recorded and performed with Steve Hackett and he also toured with the Anderson, Rabin and Wakeman version of Yes.

Ascraeus Mons features the majestic sound of the pipe organ, and although it maintains a basic riff, it's a glorious return to the prog-church of the 70s. Rick adds triumphant synth fanfares and choral effects, while Pomeroy and Soan maintain a rock-solid rhythm. Colquhoun cuts loose with a blistering solo to close a very solid and promising opener.

Tharsis Tholus has a moody, laid-back vibe with Mellotron-like flute and Pomeroy's articulate bass lines. It kicks up its heels for a touch of jazz-fusion syncopation and Rick lets fly with a customarily-agile Minimoog solo. 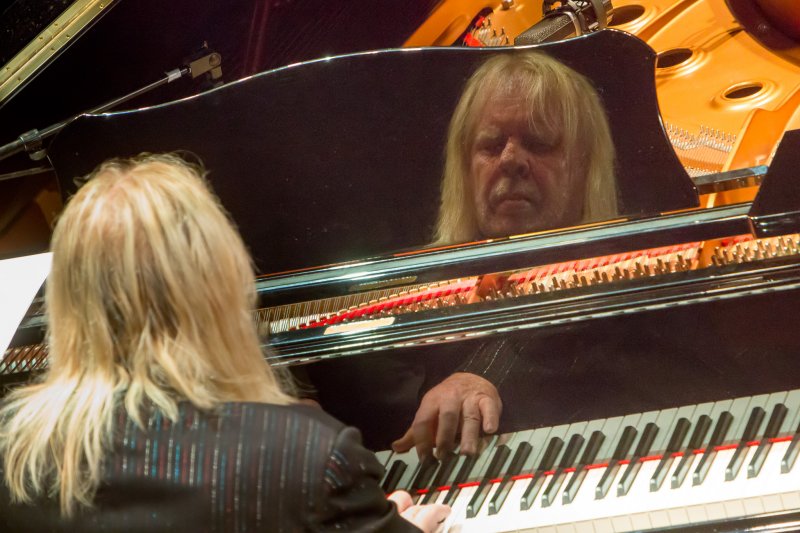 Organ and Colquhoun's power chords drive Arsia Mons, aided by hyperactive bass and drums. He's also responsible for the jazzy, but mellow acoustic guitar interlude that dominates the second half. Pomeroy's nimble bass articulations are once again at the forefront for Olympus Mons, underpinning a stately organ theme. The second part is another Minimoog workout with propulsive drums and rhythm guitar snapping at Rick's heels. The North Plain alternates between ambient, Yes-like spacey sections and aggressive, organ-led outbursts that brings Gentle Giant to mind.

Pavonis Mons is another hybrid, with a perky, staccato (and almost pop) rhythm, trading places with fleet-footed Minimoog and piano flights. The short but captivating Mellotron bridge is probably the best part, while the grandiose finalé with sampled choir is a throwback to Journey to the Centre of the Earth. The penultimate South Pole is an opportunity for reflection, with a delightful synth and sampled flute melody. Colquhoun's slide guitar embellishments and the tranquil piano interlude at the halfway mark are sublime. All in all, one of my favorite tracks.

Valles Marineris, the Grand Canyon of Mars, is one of the most dramatic landscapes in the solar system and an appropriate subject for the album's finalé. This 10-minute opus is a less darker variation on Gustav Holst's Mars, the Bringer of War from The Planets suite. Beginning with Soan's martial drum pattern, Pomeroy lays down a monumental bass riff before giving way to Colquhoun's edgy guitar. It settles into a more buoyant groove and builds layer by layer with Rick's sweeping keyboard orchestrations, before concluding with a powerful bolero riff.

As a member of the audience (sitting behind Steve Howe and Chris Squire) when Journey To The Centre Of The Earth was recorded back in 1974, my appreciation of Rick's music goes back a long way. While I've not followed every aspect of his career (his output has been far too erratic) I reckon I've probably heard the best and the worst of his work. For me, The Red Planet doesn't quite scale the heights of The Six Wives Of Henry VIII, Journey or Criminal Record, but it does outstrip the likes of Rhapsodies, Return To The Centre Of The Earth and Out There. A worthwhile addition to Rick's vast canon and a welcome indicator that, like Steve Hackett who is nine months Rick's junior, he's not lost touch with his progressive rock roots or audience.