In a recording career spanning over 20 years, The Pineapple Thief have steadily built a considerable fan-base for their slowly-evolving style of accessible pop-prog. Upon the release of album number 14, mainman Bruce Soord speaks to DPRP's Patrick McAfee about the inspirations behind Versions Of The Truth, his growing song-writing partnership with drummer Gavin Harrison, the chances of performing the new material live, and his new-found love of New Romaticism.

Hi Bruce, thank you very much for taking the time to answer a few questions for DPRP.net. It is much appreciated! I've been an admirer of your work for many years, but can say without hesitation that in my opinion, Versions Of The Truth is the finest Pineapple Thief album to date. There is a freshness and strength to the material that is not often found in the 14th album from a band or artist.

Bruce Soord: Thanks very much - that's always nice to hear! It feels quite surreal to be on the up after so many years.

Before we get into the new album, I wanted to ask you a question about your musical upbringing and your influences. What are your earliest memories of music becoming important to you and who are the musicians/bands that were/are a particular influence?

During my formative years, probably around the mid 1980s, music was in a pretty bad shape. It wasn't all shit, but it wasn't like the 70s. It was dominated by the 'New Romantics' (a lot of which I now like, ironically) and the birth of hideous, manufactured pop. So me and my mates went back to the 70s, rifling through my friend's dad's record collection. I immediately bonded with the more melodic side of early and mid 70s prog rock. Bands like Supertramp and Alan Parsons. This led me down a 70s prog rock rabbit hole. I became a huge Anthony Philips fan, collecting all his Private Parts And Pieces. I also got into Ambrosia, Steve Hackett, Al Stewart, and the Canterbury scene (Camel especially but also Caravan). So when we played our first ever show in 2003 supporting Caravan I was like a starry-eyed kid.

The overall theme of the new album, around the dismantling of truth in life, relationships, etc, is certainly timely and important. I live in the United States and suffice to say that the mangling of truth, politically in the last few years, has been alarming. It's had a tremendously negative and divisive impact on many aspects of life. That said, the response or offense to that has also provided the opportunity for people to show solidarity and strength by openly opposing what is untrue and unjust. Though the album drives home its theme in a vital and thought-provoking way, it doesn't wallow in direness. There are tracks like Out Of Line and The Game that don't mince words, but overall the feel of the album has a level of hopefulness to it. Do you feel optimism in terms of our opportunity to move this world in a more positive direction?

Well I really hope so. I would never be able to write an album signalling the end of humanity as we know it, that would just be too depressing even for me! The state of the world today, it seems to have mobilised the (usually) quiet, rational portion of the world. The people who believe in facts, science and rational debate. Having said that, when I came up with the title it was back in October 2018. The UK was submerged in Brexit and whichever side you take on that debate, it's been a tragedy for our country. I would never have thought the world would be in an even worse state, now the album is finally being released. But I'm still optimistic that we will live to tell the tale of this strange time.

As I mentioned, the album tackles some serious topics, but doesn't feel heavy-handed in any way. I believe established fans will love the album. It also struck me as being musically accessible and focused in a way that could continue to expand the band's audience. It is sophisticated and complex, as one would expect from a Pineapple Thief recording, but as a whole, I found it to play like a great, beginning to end, progressive pop album. Was there an intent or goal to change things up or move in a different direction on this release?

I can honestly say that none of us ever had that discussion. We just wrote and developed the songs as best as we could. I guess my love of "melodic prog rock" means that I still like to write song-based music, which puts it in the "progressive pop" arena. I wouldn't say the new album is a pop record, but in the context of the wider progressive rock scene then you have a point. For that reason, the band sometimes divides opinion. All I really care about is the craft of songwriting and delivering it in the best way possible, to connect with people.

The Pineapple Thief have released many excellent albums, but the addition of Gavin Harrison really seems to have had a positive influence on the overall sound and direction of the last few albums. How did your musical collaboration with Gavin begin and develop, especially as it relates to songwriting?

As soon as Gavin came on board with Your Wilderness it was clear we were on the same page, in terms of where we wanted a song to go and also being open to new ideas. Even then Gavin had loads of ideas and the songs changed pretty dramatically, even though Gavin was "just a session drummer" back then. This relationship just got stronger as we got to know each other better, and Gavin became an official member. Finding someone to trust with something as precious as songwriting, especially when I've been doing it solo for so long, is a big thing! So yeah, I'm very lucky to have that person. To take songs beyond the point you can make on your own. I know a lot of people say they can't write by committee or in a democracy but I'm very happy to do that, because I know it makes our songs better.

In terms of the pre-release promotion of an album as well as artistic expression, things have gone back a bit to how they were in the 80s and 90s with MTV and such. By way of YouTube, Vevo, ITunes, etc, music videos have become important again. The videos for Break It All, Demons and the title track are very impressive and visually stunning. Are you a fan of promoting your music in this format and how directly involved are you, creatively/conceptually in the videos?

I think artists are still trying to figure out how to work in this new world. YouTube is huge. Financially it's the worst platform, but in terms of getting your music out there, it's probably the most important. I'm still a big fan of the music video. Bands don't have budgets like they did in the 80s but George Laycock (who produces and directs all our videos) is a master at making things look cinematic, which suits our music perfectly. I give him total artistic control.

With touring off the table in 2020, you've done some acoustic sets online. With the album being released in September, do you foresee the possibility of playing a virtual concert of some kind with the band?

We've talked about it. For a band who haven't toured our new album, it would be a lot of pre-production just for a one-off show. When we tour, we spend 2-3 weeks in pre-production getting the set ready. Even then, the first show is always (relatively speaking) quite ropey. If we had just come off a tour when the "global pause button" was hit, then we could have done it. But at the moment it's too difficult to get it together for a one-off. Having said that, if the pause button isn't reset soon, then it's something we're gonna have to think about!

One last question. I am a big fan of the brilliant 2013 Wisdom Of Crowds album that you made with Jonas Renkse of Katatonia. I was wondering if there is any chance of a follow-up album at some point from you and Jonas?

Never say never! I talk to Jonas quite a lot. We are always talking about getting together again one day in the studio.

Bruce, thank you again for taking the time to answer DPRP's questions. Versions Of The Truth is a triumph and I wish you a tremendous amount of success with the album! 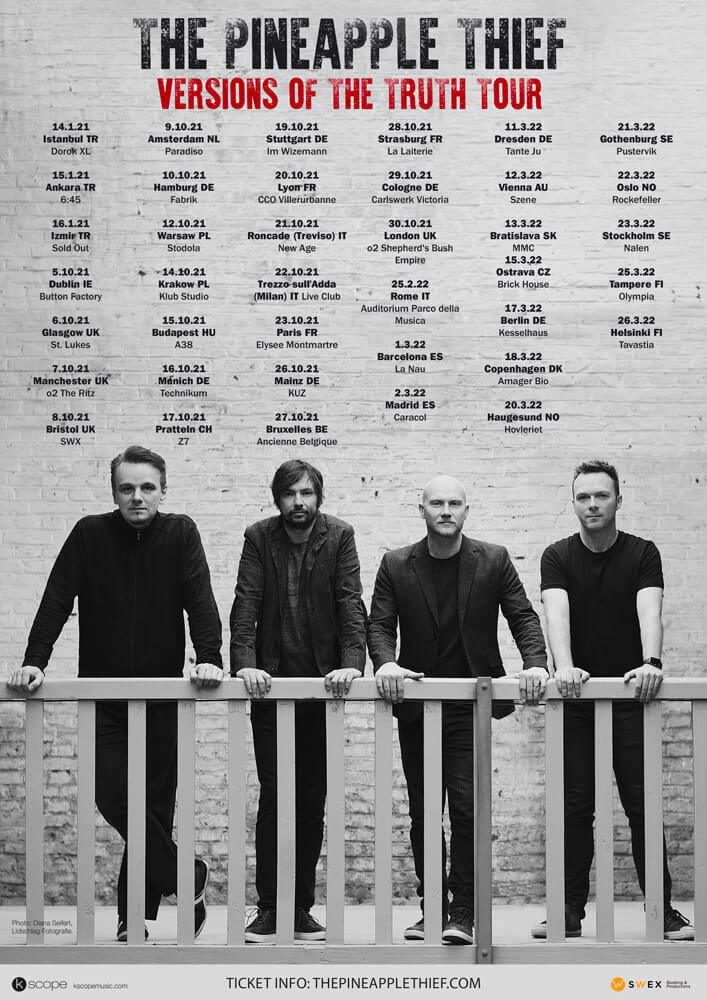 The Pineapple Thief — Versions of the Truth 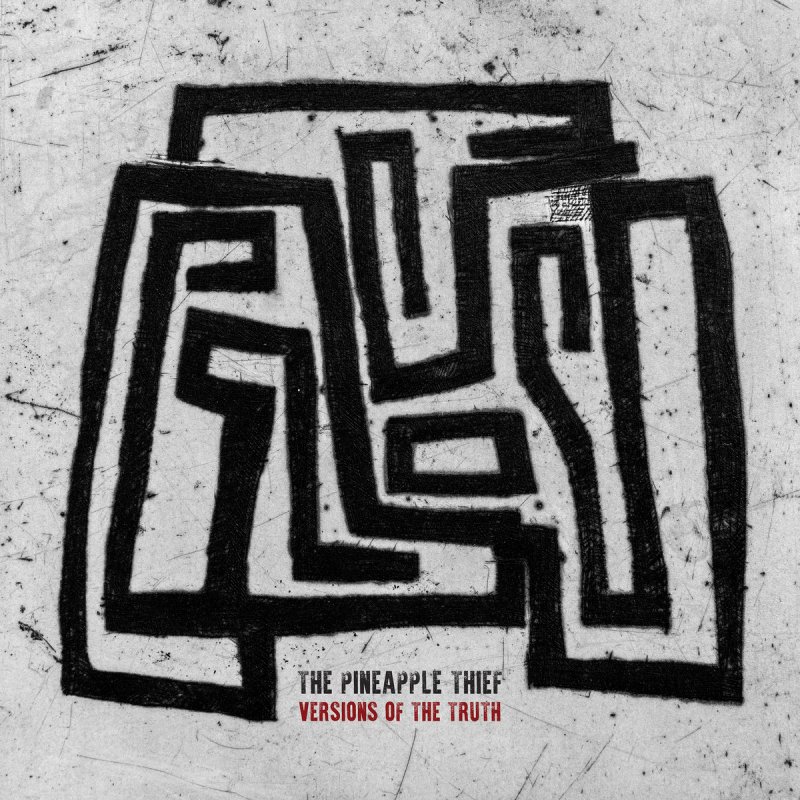 For over twenty years, The Pineapple Thief has been a recording entity for multi-instrumentalist, singer/songwriter Bruce Soord. What started as a solo project developed several years ago into a proper band. Adding Gavin Harrison (Porcupine Tree, King Crimson) to the line-up in 2018 added a new spark and improved upon an already impressive discography. Removing all suspense from this review, I will state that Versions Of The Truth is the best album that The Pineapple Thief has released to date. Clocking in at a compact and effective 45 minutes, there is not a wasted note or a daft track to be found on it.

Though not a concept album in the typical sense of the word, the running theme around the value of truth is timely and effecively presented. Lyrically strong and coherent, but never heavy-handed, it is a sophisticated and thought-provoking work. With a focus on the dismantling of truth in relationships, as well as in our world, there is unavoidable anger and frustration presented in the lyrics. However, there are also moments of light, and the album as a whole doesn't feel dire in tone.

The effectiveness of the lyrics is equally matched by the quality of the arrangements and performances. The Pineapple Thief has never been a band that I would label as 'unrestrained' from a prog perspective, but they have found the perfect conciseness on this album. The material is accesible, without the band sacrificing their musical edge. Highlights include the sublime title track, the deceptively upbeat, Demons, Driving Like Maniacs with its gospel-tinged vocals and the quietly-urgent album closer, The Game.

Ultimately, this release falls into the classic definition of an "album". It is consistently strong throughout, never wears out its welcome and demands to be listened to in full. Every song resonates, and immediately after my first listen, I wanted to hear it again. Thoroughly affecting and supremely entertaining, Versions Of The Truth is absolutely one of the finest albums of 2020.