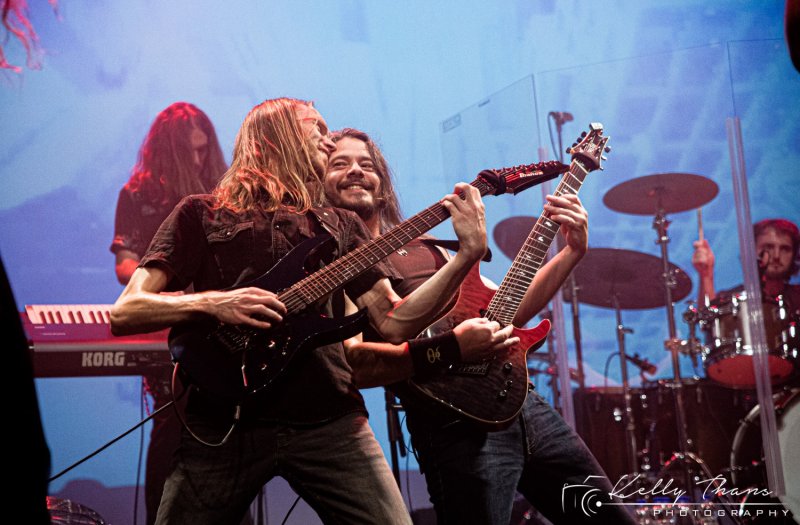 Dreamwalkers Inc — A Night At The Theatre 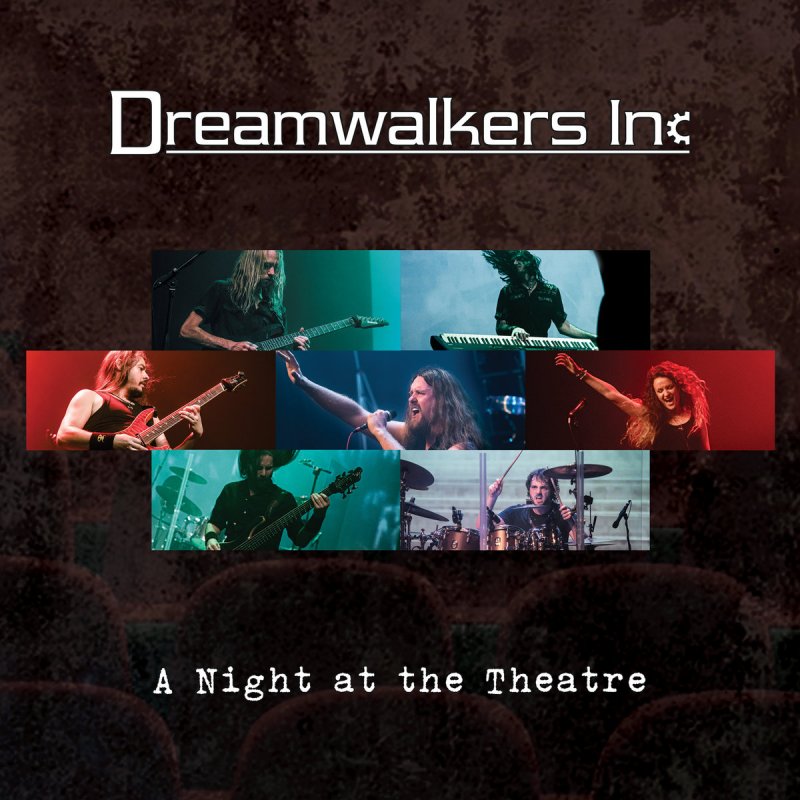 Not long before I attended and reviewed Dreamwalkers Inc's excellent gig in Hoofddorp, the band played a gig at the Parktheater in Alphen aan den Rijn. A venue with a great atmosphere and sound. The gig was recorded and has now been released on CD and via Bandcamp. After my experience in Hoofddorp I was looking forward to a proper document of their live sound and it came sooner than I expected.

It must have been a special gig for both the band and audience. The seated venue, the subdued welcome from the always-friendly and down-to-earth front-man Tom de Wit, and the melancholic start with Chameleon. Of course, after 2 minutes we have what we came for: symphonic progressive metal!

Melancholy is never far in the band's music. That's one of the attractions for me. Plus the super-melodic blasts and metal riffs, complex in structure but never confusingly so. I prefer the multiple layers of sound, the riffs and melodies, to be brain-melting, not the number of changes in time signatures. And while we're in the subjective section of the review, I should add that, not being much of a Steve Perry or James LaBrie fan, I am glad with the not-so-typical baritone voice in music like this. To my taste he adds a lot of energy and feeling in the music.

Guitars and keyboards are flashy when allowed (and sometimes expected!) but never more than functional, and it's always good for show. And I just love the way they play their melodies, and with their melodies. Complementing each other giving the music a fuller sound - as if it could be anything else with five instrumentalists and two vocalists. 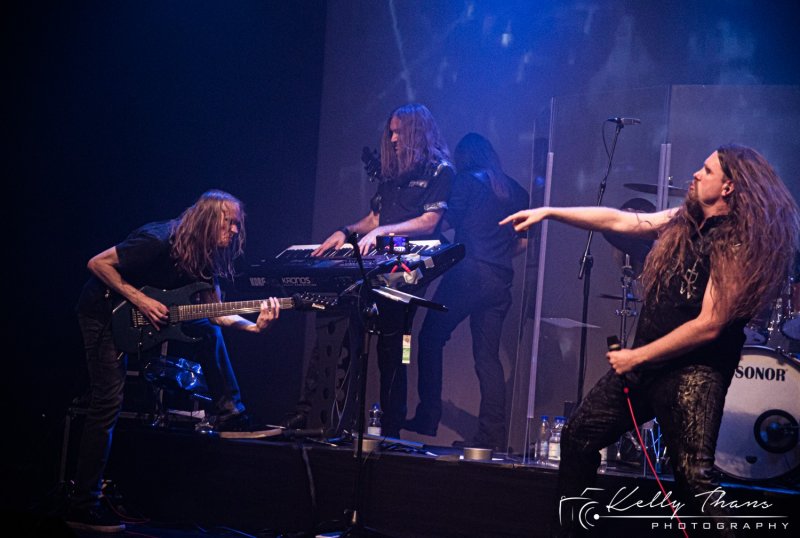 Of course, the music knows lots of quieter pieces - reflective, contemplative, sometimes room to breathe and sometimes building even more tension until the next outburst. The contrast is an essential part of the whole atmosphere the band is creating. While especially the longer pieces probably remind some people of Dream Theater, I think that especially the shared vocal duties between male and female voices, a clearer comparison is made with Ayreon, albeit Dreamwalkers Inc being a bit heavier, leaving Ayreon a bit more friendly towards average prog listeners.

Where live albums can be difficult to produce, what we have here is nothing but an excellent job. Sometimes you just don't realise this is a band playing live, so tight, and stored on file in such a good mix. The songs are taken from albums between 2014 and 2018, giving a good mix from the last couple of years when most of these musicians were working together. The selection of songs was probably done with this live album in mind, showcasing all their musical sides, and the show having a good flow for listening to the album in one go. Simply a great live album, you cannot go wrong with this one.

You can even watch the video of the full gig as it has been released on the label's Youtube channel!

It's was a "regular" Tuesday in march 2020, and the Covid-19 pandemic had just managed to slay all my live events. And as I'm listening to some comforting music I'm briefly interrupted by a promotional email notifying the release of A Night At The Theatre by Dreamwalkers Inc. The adjacent press statement includes a recommendation by fellow DPRP reviewer Jerry and since we share a substantial musical history together, my curiosity was instantly ignited.

Although never having heard their music before, the name Dreamwalkers Inc (formerly known as TDW) wasn't a complete unknown. Reason for this are related songs issued by bandleader Tom de Wit on his YouTube channel, where he surprised me sometime ago with a funny, engaging and rather enjoyable version of Liefs Uit Londen, a Dutch pop ballad turned into a lovely prog metal track. Intrigued I decided to listen to the live album in the background, whilst frantically swiping my way through Candy Crush levels, trying to ease my inner Corona tension.

Recorded on the 31st of August 2019 at Parktheater in the city of Alphen aan den Rijn in Holland, the show starts with Chameleon, a song similar to its natural equivalent, gliding from a quiet opening filled with harmonic vocals of De Wit and Radina Dimcheva into an eruption of energetic prog metal. Bombastic colourings, melancholic guitars, riffs (confidently enforced by Norbert Veenbrink), symphonic elements and dynamic rhythms are all enriched by solid harmonies. Further keyboard accentuations, a fierce guitar solo (Lennert Kemper) and the incredible tight versatile rhythm section, consisting of Peter Den Bakker (bass) and Kenneth Martens (drums) immediately stands out.

This outburst of musical deliciousness is continued as the band dives straight into Surface Scratching, showing marvellously how eager and bursting with enthusiasm they are. The disarming character of de Wit shines through in his presentation, and can even be heard in part of his vocals here, which gives the recording a further fun and honest element. Some spontaneous remarks later on in the set have the same charming effect. The infectious bombast, spacious synths rolling over a throbbing bass line, gracious solos and melodic power manages to heighten the experience even further.

The technically sublime executions and neo-progressive feel continues in similar fashion in Happy Day, before Dreamwalkers Inc slowly take the foot of the gas. With Cailyn Erlandsson on guest vocals Dirge shows a more sensitive side, where the touching interaction of vocals is met by emotive bass and playful subdued instrumentation. This is temporarily caught brilliantly as well in Lovesong which sees short ambient leanings, atmospheric pop influences and refinement in arrangements. Rounding off this intimate part of the set is Your Room, highlighted by playful organ where the end is slowly turning the power up a notch. All the while the warmth of de Wit's voice is a perfect accompaniment to these tracks giving them character and depth. 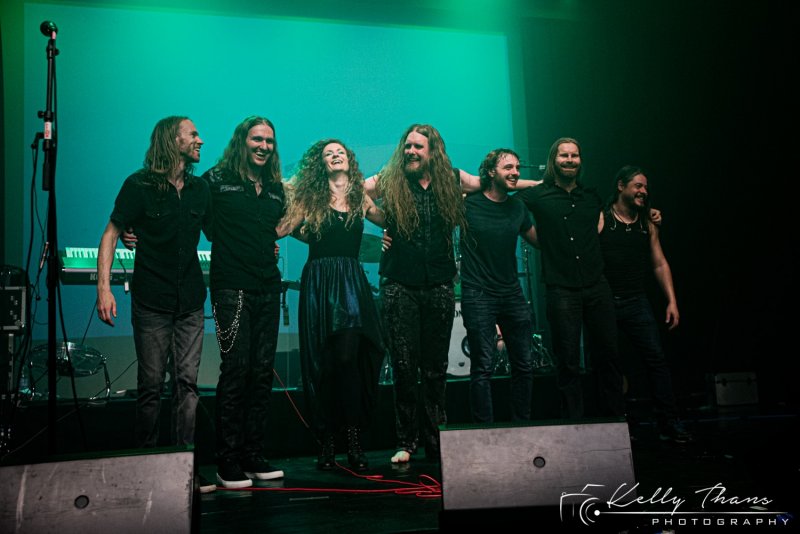 The seductive Aphrodisia sees a most confident return to prog metal. The quiet intro slowly converges to a bombastic passage after which it spirals into a brutal aggressive waterfall of vocals, exciting melodies and thrilling executions. This infectious and addictive track reveals numerous metal influences each delivered in technical sublime renditions. Once the atmospheric coda has passed I find myself just staring blank at my phone, without the necessity to swipe any more as this has been taken over by musical bliss.

This majestic moment is seriously surpassed by the immaculate The More We Remember. Where all of the above has provided a highly entertaining ride so far, this epic track degrades all this to a nice stroll and proves to be the mother of symphonic prog metal roller-coaster rides. Actually it's more like a theme park, for it turns out to be a colossus of Pythons, Leviathans, Goliath's and Intimidators, all compressed into one gigantic delirious composition. A momentous experience where it's many twists and turns converge with quiet passages, and symphonic deliciousness intertwines with fast dynamic movements. Meanwhile bombastic eruptions and uptempo segments spiral into an overwhelming array of pompous elements, with Kemper adding a third variety on vocals. Refined piano, tantalising keyboards (Vincent Reuling), compelling rock, luscious guitar solos: you name it and it's destined to be included in this mighty adventurous track that just keeps on giving and presses me securely into my seat, gobsmacked.

Once the CD fades out an inner voice slowly formulates a single phrase: "Houston, I have a problem".

Firstly because I have just finished my trilogy of excited "Merde!" experiences (after Nemo, Mystery, and Different Light), which thanks to this marvellous release now needs to be extended with a fourth element to start a series.

Secondly I want to witness this in an actual live setting myself, which in light of social distancing is not likely to happen any day soon. This would also mean Dreamwalkers Inc need an even bigger stage considering the eight member formation, though that's actually befitting as they totally deserve it on basis of this performance.

The exciting music contains a high level of entertainment and proves ultimately fulfilling when the prog metal knob is switched to maximum settings. The inventive originality of the compositions, showcasing many creative influences ranging from every corner of the metal / progressive world (and more), is refreshing and proves to be equally satisfying. Add to this the rewarding combination of technical skilled execution, emotive melancholies and excellent performances throughout and it's clear Dreamwalkers Inc are a band worth investigating. In other words: Ayreon, eat your heart out.

Highly recommended for prog metal fans with a sense of the adventurous. Don't take my word for it though, and judge for yourself on the recently released YouTube-stream of the concert.