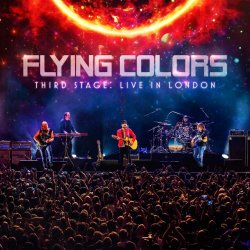 In 2020, live releases have taken on a more profound relevance than in previous years. With Covid-19 essentially bringing a halt to touring, it is encouraging to see and hear a concert performed in front of a large audience. These releases serve as a reminder of what was common just nine months ago, but somehow seems much longer in the past. Recorded in December 2019, Third Stage - Live In London is not only sadly nostalgic, it confirms Flying Colors' status as one of the best supergroups to emerge in recent years.

The setlist of this show contains many of the prime songs from the band's three studio albums. This is their third live release, but it proves to be the most essential, considering the amount of their own material that they now have to choose from. Due to the busy schedules of the members (Neal Morse, Mike Portnoy, Steve Morse, Dave LaRue, Casey McPherson), Flying Colors doesn't perform together often. Nevertheless, this show reflects a band that is clearly in sync and having a great time. Their ardor is noticeably heightened by the enthusiastic audience. Though prog crowds are not generally known for jumping to their feet and clapping to the music, these folks apparently didn't get the memo.

It is a testament to the quality of both the audio and video editions of this concert that the exuberance of the performance is so evident. Steve Morse and Dave LaRue have some solos that shine, but it is the band as a whole that truly impresses. This is an excellently produced document of a highly entertaining concert and its two-hour length flies by effortlessly. Also, the video edition includes a bonus Flying Colors concert filmed at Morsefest earlier in 2019. That hour-long show is also fantastic and includes strings, which adds a new dynamic to the material.

This release really cemented for me just how good Flying Colors is. From a musicianship perspective, they are off-the-charts. However, it is the strength of their compositions that is most notable. With the setlist of the London concert playing like a 'best of' collection, this release would serve as a great introduction to the uninitiated music fan. If you are already familiar with their work, the quality of the concert makes it well worth your time.

Third Stage - Live In London is a true gift in this concert-starved year. At one point, while performing Cosmic Symphony, Casey McPherson walks through the crowd, shaking people's hands. I am sure that it didn't seem like much last December, but now the moment resonates as a reminder of a much more normal time. Most importantly though, the concert as whole provides a comforting hope that we can soon get back to the filling concert halls again.