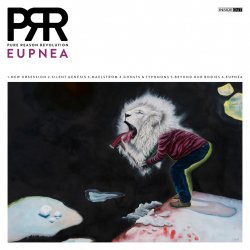 Pure Reason Revolution released three studio albums over a five year period in the mid to late 2000s. The first of which, The Dark Third(2006), was an instant hit with prog audiences. Later albums sacrificed the classic prog leanings of thier debut, for a heightened electronic sound, but the results were still adventurous. These strong studio albums, combined with first-rate live shows, made their amicable 2011 break-up all the more disappointing.

Since that time, band leaders Jon Courtney and Chloë Alper moved onto other projects. However, last year when Courtney sat down to write new material, he noticed that it sounded like PRR. This led to a phone call with Alper who agreed that it was time for a rebirth of the band.

Much of the marketing for Eupnea pushes a connection to their debut album and yes, it is definitely a return to a proggier style. Ultimately though, Eupnea utilises elements from all of their previous works, while still moving in fresh, dynamic directions. Though I had admiration for PRR back in their original incarnation, I am still surprised with just how much Eupnea has impressed me. I expected a quality release, but this album exceeded my expectations. It is a signature statement and a triumphant return.

Album opener, New Obsession is a great reintroduction and an instant reminder of what made PRR unique. The urgency and stregnth of the song immediately validates their reunion. From a prog perspective, Silent Genesis, Ghosts and Typhoons and the 13-minute title track, all showcase a new-found edge and increased musical confidence. There is a very noticable intricacy to both the production and the arrangement of these songs. The moments of crunching guitars and pounding drums are brilliantly countered by lush instrumentation and Courtney's and Alper's wonderfully harmonic vocals.

These expansive proggy tracks are in juxtaposition with the more accessible, yet nonetheless effective, Maelstrom and Beyond our Bodies. Both are excellent songs that highlight the band's ability to impress with complex lyrics and strong melodies. Also, the expressive and, at times, forceful drum work drives much of the album. As an example, the power of the title track is often expressed through thunderous drumming that plays like an homage to John Bonham of Led Zeppelin.

Full of splendid songwriting and powerful musical performances, Eupnea is a brilliant return for Pure Reason Revolution. It is not hyperbole when I say that as I was reviewing it, I looked forward to each listen. There are many reasons that I can recommend this superb album, but the most logical is to just emphasise how significantly entertaining it is.

"Whatever Pure Reason Revolution produces is going to echo the back catalogue, but it cannot help but be a progression". This is Chloë Alper, Pure Reason Revolution´s vocalist, doing the job for all of us reviewers as it could be the best way to describe, not only the band's new music, but also their previous albums.

When a few months ago I received the news of this comeback album, a big smile came to my face. I remember discovering The Dark Third back in 2006 (you can read our great duo review here) and also their previous mini album Cautionary Tales For The Brave.

Those albums appeared as fresh air into the progressive rock atmosphere and that mix of classic influences, alternative sounds and great vocal harmonies put the band on top of the new progressive rock artists. As Chloë says they kept progressing in their second full length album, Amor Vincit Omnia, not losing those fuzzy guitars and tempo-changes, but focusing on the 80s electronic pop scene. It was quite a risk because they were tagged as the new progressive rock stars and I'm sure many prog nerds did not appreciate that change of style. In their final album before the long pause they moved again among electronic influences but with a clear industrial approach. Hammer And Anvil was a very good album in my opinion but by that date their status in the progressive rock world was not the same. The good thing with Pure Reason Revolution is that they don't care about styles.

Eupnea is the title of their new album. It comes 10 years after Hammer And Anvil and in those years Chloë Alper has been involved in Tiny Giant, a pop duo with several good singles. In the meantime Jon Courtney formed a band called Bullet Height more in the vein of Pure Reason Revolution and also including double vocals but with more of an alt-rock orientation. And in fact the idea of bringing back the band took place while recording new some songs for Bullet Height.

In this new album you can find all the elements that define Pure Reason Revolution: great vocal interplay, the harmony sections, the aggressive parts mixed with delicate piano sections and surprises in every songs.

The album contains only six tracks lasting almost 48 minutes. It mixes 5 minute songs with longer pieces. I will add a few comments on each, to point how the band has perfectly mixed their classical sounds with some new elements that could define their future sounds (or not!)

The album starts with New Obsession, the second single released only a few weeks ago. A short song that makes you think again about how good The Dark Third was. The slow intro gains heaviness as it evolves until the typical softer part before the ending.

Silent Genesis is the progressive rock we are taking about. It was a great first single, again having all the elements that define the band's sound, but including very interesting new, almost funky, parts and some guitar riffs that remind me of The Smashing Pumpkins.

Maelstrom starts with Chloë singing quite similar as she did with some Tiny Giant songs but evolves into some beautiful vocal games with Jon. It is a soft pop song until it somehow explodes again, perfectly mixing piano sounds with guitar parts. Ghost & Typhoon also starts quietly but then we go back to the past, including heavy guitar sections and that infectious rhythm we found on Hammer And Anvil. The song of course progresses, finding again the quiet moments before the heavy ending. It would be interesting to check the power of this song live.

Beyond Our Bodies brings calm again. Jon said in an interview that the lyrics on this song are about his daughter having to struggle when she was born at just 32 weeks, and the music also reflects the highs and lows of that situation. And almost without realising we have reached the last song, the title track of the album, which refers to normal breathing frequency. This is the longest track and could be the summary of all the previous songs. It slowly progresses with no rush and creating those atmospheres PRR are all known for. Don't look for technical solos, speedy keyboards and the usual clichés of progressive rock. This is something different, and as I thought when I discovered PRR many years ago, this band is the tool to gain new fans to the progressive rock scene; so let your alternative rock friends discover it and they will be engaged for sure.

Pure Reason Revolution's return is the best surprise of 2020 so far! After scratching the surface of synth-driven prog/alt rock in the late 2000s, the band gave up way too early after producing only two EPs and three full length albums. Six years is not much time to become successful, and by that, their initial appearance remained rather unnoticed, even though the project's future looked pretty promising. So the restart of PRR is a great idea of John Courtney and Chloë Alper.

Eupnea is a very good continuation of the band's discography, with a matured hand that brings in much of the experience which the composers have gained in the meantime. The spacey atmospheres of Pink Floyd and the synth escapades and dynamic arcs of Porcupine Tree are the main ingredients to their recipe. Adding to that, influences of Muse and early Ultravox round up the instrumental base of their music.

The alternating vocal lines of Courtney and Alper, which fit together so wonderfully, are the perfect leads over their multi-layered soundscapes and provide a wonderful lightness, but also depth at the same time. It is (again) an album that entertains pretty well when it spins in the background to your work, but is also of such great musicianship that you can just sit down and listen to, becoming enchanted while studying the full depth of their clever arrangements.

But while their compositions have great and delicate dynamic arcs from light to heavy, it bothers me that the mix does not have the same. Like on their previous albums, the production is very radio-friendly. The loudness is of very little dynamic range, so that almost everything you get to hear is practically at the same level, with only a few dBs of variation. The listening experience suffers quite a bit from that, since the music isn't radio format.

But still, Eupnea is a very good album and should attract all fans of Pink Floyd, Porcupine Tree, Muse, and Anathema.