The album was recorded on 5th October 2018 at The Royal Festival Hall, London, during the 2018 Genesis Revisited Tour which fulfilled a long held ambition of Steve's: to perform the music of Genesis with a live orchestra.

The set is released as a 2CD + Blu-Ray and a 2CD + DVD version. In this special DPRP Duo Review, Mark Hughes gives his views on the 2CD version, while Patrick McAfee casts his eye over the DVD version. 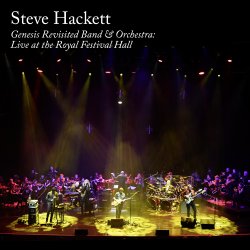 There certainly hasn't been a lack of Steve Hackett live albums over recent years, this latest is the sixth in eight years. In that time Hackett has covered 31 different Genesis songs, with several featuring on multiple releases. The result is that, on average, over 62% of the playing time of these releases has been dedicated to songs by a band that Hackett left some 42 years ago.

On this latest release, the percentage, at 72% of the playing time dedicated to Genesis songs is higher than the overall average. Obviously, the interest in perhaps the ultimate prog band remains high and one can't fault Hackett for capitalising on his musical legacy, particularly as he has varied the repertoire and performed some rarities from the back catalogue. After all, who would ever have imagined Inside And Out being performed live? (I'm still waiting for Pigeons though!). Having said that, the recordings from the Royal Festival Hall do not feature any songs that have not appeared on a previous live album.

So, why should one spend more money on a relatively expensive CD/DVD package when there is nothing that has not been heard before from Hackett and his band? Well, quite simply you haven't heard the like of these renditions before, as the Heart of England Philharmonic Orchestra contributes immensely to the way these sounds are heard and perceived.

Unlike albums containing orchestral versions of Genesis songs that have to provide the entire essence of the song, having the orchestra playing alongside a full band allows the orchestra to take on a distinctly unique role; supporting and expanding on the melodies, providing unexpected flourishes and increasing dynamic tension. The orchestrator (who unfortunately isn't named on the press release accompanying the audio files sent by the label) has done a superb job of incorporating the various sections of the orchestra into songs that were written without any thought of how or where a string section, for example, would fit in.

By now, fans will be very aware of how well the musicians that accompany Hackett have mastered performances of both solo and Genesis material and the assemblage on this release - Roger King (keyboards), Gary O'Toole (drums, vocals), Rob Townsend (saxophone, woodwind, percussion, vocals, keyboards, bass pedals), Jonas Reingold (bass, Variax, 12-string guitar, vocals) and Nad Sylvan (vocals) along with special guests John Hackett and Amanda Lehmann - don't disappoint. Even the sometimes annoying (to me anyway) vocals of Nad Sylvan can't be faulted.

There is no doubt that the previous live releases have contributed to generating the finances required for putting on a show with a full orchestra, and so for that reason alone the frequency of their appearance can be somewhat justified. It is a shame though that the success of the Genesis Revisited concerts have limited the live performance of Hackett's solo material, particularly as his latest albums have been very good and demonstrate a late purple patch in terms of his writing.

This, of course, may be directly correlated to re-familiarising himself with the styles and song structures of the early seventies; if you are going to be inspired then it doesn't help if the inspiration is among the best. Ultimately, it is probably Hackett's fate to be eternally labelled as ex-Genesis guitarist, as opposed to Collins and Gabriel whose solo work, in the perceptions of the general public at least, eclipses their band achievements. But I am sure the guitarist has come to terms with this and is committed to providing for his fan base. As the old saying goes: Give the people what they want.

Out of all of Hackett's live albums from across his entire career, Genesis Revisited Band And Orchestra: Live At The Royal Festival Hall is my absolute favourite, as it breathes new life into the songs; and I have always been a sucker for an orchestra.

My admiration for Steve Hackett's talent has been previously documented on this website. Part of that is due to his continued drive to be relevant and inventive. Using his recent studio releases as an example, it would be easy for him to ask a few musicians into a studio to make an album. That's not Steve Hackett though. Instead, his recordings have been global projects, in which he recruits musical talent from all over the world.

Though some may argue that his recent focus on the Genesis library is a safe course to follow, he even strives to keep that as interesting as possible. This October 2018 show, with the 42-piece Heart of England Philharmonic Orchestra, is a testament to that fact.

The visual presentation is edited to effectively showcase Hackett, the band and the orchestra. Filmed with respectful attention to the music and the performances, no tricky camera angles or intrusive video/audio tricks are utilised. The band seems to be having a great time playing these songs in a different format. There are moments where Steve himself is beaming with pride at the performances going on around him. He tends to be a somewhat proper performer, but here his enthusiasm is clear to see.

At times, with performances of this nature, the orchestra will provide inconsequential padding to established rock songs. That is not the case here. It is apparent that significant effort went into ensuring that the orchestra would play an integral role in the arrangements, and in the overall performance. Plus, the orchestration is never a distraction. Their involvement feels natural and often adds a powerful eloquence to the material.

Having heard Genesis songs orchestrated before, the Hackett solo material really stands out as something new. Shadow of the Hierophant, with guest Amanda Lehman, is stunning. The last five minutes of the song is particularly breathtaking with added orchestration. The Steppes, El Nino and the beautiful Serpentine Song also display an expanded depth.

The Genesis material includes standout performances of Firth Of Fifth, Dancing With The Moonlit Knight and In That Quiet Earth. With much of the band's early material being reflective of classical music, it works well in this setting. Of particular interest is Supper's Ready, because, well, it's Supper's Ready. The version here is quite good and Hackett's extended guitar solo on As Sure As Eggs Is Eggs is fantastic. It's always fascinating to watch him play the guitar because he always makes it look so deceivingly easy.

My rating represents the fact that I can find little to criticise about this release. The setlist is great, the orchestral arrangements are compelling and the performances are flawless. The Yes' Symphonic DVD from 2002 contained an encore where the orchestra members are dancing and clapping. You will find no such exuberance here, but the more stoic nature of the Hackett performance fits the material. I challenge anyone to try and dance to The Musical Box, because some things just aren't possible.

As far as recorded prog concerts go though, Genesis Revisited Band & Orchestra is an excellent document of a special and unique event.