The Flower Kings — Waiting For Miracles 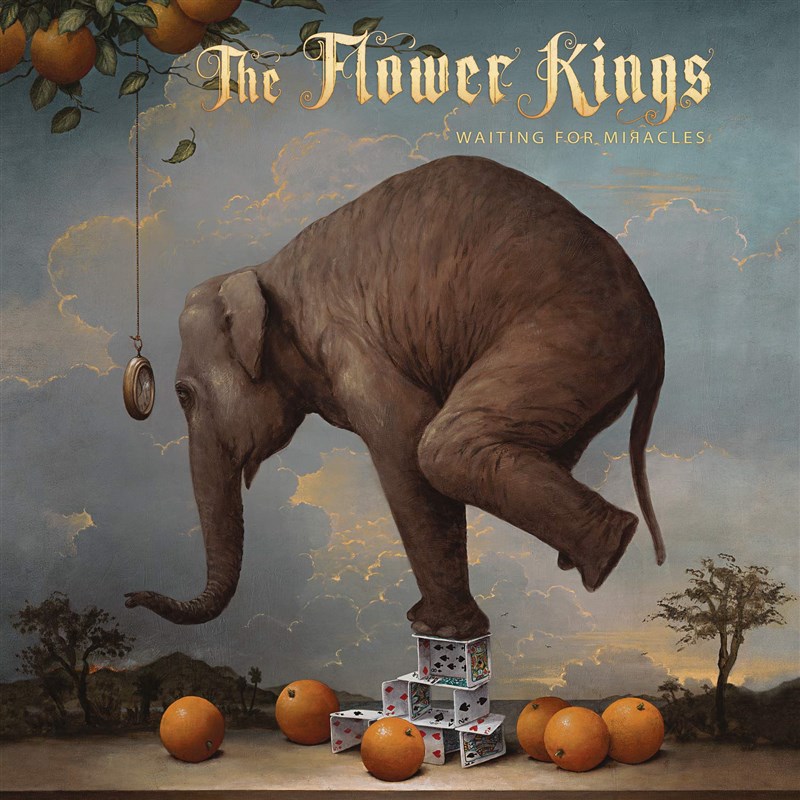 It's almost 25 years ago that Swedish singer/songwriter and guitarist Roine Stolt took his solo project a step further and began the writing and recording of what would be the first Flower Kings album, Back In The World Of Adventures, accompanied (amongst others) by brother Michael Stolt on bass, Tomas Bodin on keyboards, Jaime Salazar on drums and guest singer/guitarist Hasse Fröberg.

The line-up has rotated and evolved a number of times over the span of the band's long career, and yet with their latest release, Waiting For Miracles the solid core of Stolt, Fröberg, and bassist Jonas Reingold remains, accompanied again this time by Michael on bass, and the impressive TFK tour-hardened Mirkko De Maio in the drum seat as well as Zach Kamins on keys.

Their 13th studio release comes to fruition after an extended six-year absence since the darkly-political Desolation Rose in 2013. (Manifesto Of An Alchemist (2018) was released as Roine Stolt's The Flower King.)

As always the sound is distinctively The Flower Kings, its DNA borne out of classic-era progressive rock, amped-up to dynamic levels that few bands achieve. Untainted by cynicism, and proudly outward about their stance, they have not tampered with the formula with this release. Certainly the heavier beats and shorter track lengths of recent years are still part of the foundations, but the virtuoso, complex movements that made up the fan-favourite albums between the mid-nineties and the early 2000s are in the recipe again. Sprawlingly epic and achingly beautiful at the same time, this is another double album of prog that is testament to the power of the genre.

The delicate Elton John-tinted opener gives way to the brilliant Black Flag, which on the surface is a romantic, sail-by-the-stars pirate romp. And yet Stolt employs his usual lyrical ambiguity here, hinting at darker elements below the deck. It's a profound and grand start, with a gigantic ascending and descending melody that draws from classical leanings. Possibly their finest piece of song-smithery since I am the Sun and another proud watermark in their catalogue.

Mixing an almost 'Broadway'-inspired number with a plea for sanity, Miracles For America is full of heart and despair as well as hope in crazier times.

Elsewhere the treats are found in a mixture of colossal, cinematic mastery with a feel of dystopian sci-fi in Ascending To The Stars and The Bridge, which rewards the listener with a scorching guitar solo which stands toe-to-toe with the likes of All You Can Save from Garden Of Dreams any day of the week.

The high level of excellence continues with another movie-like offering. In an alternate universe Sleep With The Enemy would be the theme to a Bond movie. Think smoky, mysterious opening titles, whilst the husky velvet of Fröberg's high baritone cries: 'Sleep with me, cos tomorrow I'm the enemy.'

The playful eccentricity that typifies their earlier work, reassuringly comes in the form of The Rebel Circus; Daubed in brighter tones, it brings an unfettered joy to the proceedings.

There are no shortage of gems on the second disk either. The melodic, Yes-infused Steampunk musters a familiar feeling that reassuringly takes the listener back to earlier inventive stylings.

At its core, Miracles .. is structurally built like many of the classic The Flower Kings albums, and without doubt it further consolidates an already impressive output. It is a tightly focused package of songs that has a diverse density and richness that most bands don't muster in their entire career. It could take its place against its famous siblings such as Stardust We Are and Space Revolver. Only time will tell, but whatever the case there is another compelling release here.

Back in the prog resurgence of the 1990s, The Flower Kings were an exciting breath of fresh air. On albums like Retropolis and Stardust We Are, the band did a masterful job of putting a modern spin on the spirit of classic symphonic prog. Over time though, their musical template wore a bit thin, and later albums lacked distinction. This decade has seen their output reduced, but with each new release comes the hope of a recaptured magic.

Is Waiting for Miracles the album to accomplish that feat? To a large extent, yes. In my estimation, it is easily the best The Flower Kings album since 2000's, Space Revolver. Much like that album, there is more of an immediacy (and quality) to the material here. The Flower Kings seem to excel most when they focus on their strengths and avoid their excesses. The more compact nature of these songs works well and represents some of the best songwriting in the band's history. Some previous releases by the band were impacted negatively by mediocre epics and the double album platform. There are no twenty-plus minute songs included on Waiting for Miracles, and yet the album still sustains its almost 90-minute length.

Though their traditional sound is evident, so are the attempts to bring fresh elements to the material. New keyboardist, Zach Kamins plays a big hand in those changes.

Album highlights include the alluring, piano-based House of Cards, as well as its more electric reprise. Miracles for America is one of best traditional The Flower Kings rockers and The Bridge displays a sparse musical landscape that is unlike anything else in their discography. Ascending to the Stars is a cinematic instrumental and Wicked Old Symphony and We Were Always Here showcase the band's unsung ability to pen an accessible tune. The Rebel Circus is another strong instrumental that includes some striking Holdsworth-like work for Stolt.

As a somewhat disenchanted admirer of the band, I was preparing to dismiss Waiting for Miracles. That was clearly a mistake. This exceptional new release reaffirms their status in the prog genre. Sounding as musically assured as they have in many years, The Flower Kings prove that they are once again a force to be reckoned with. No hyperbole folks, this is a great album!