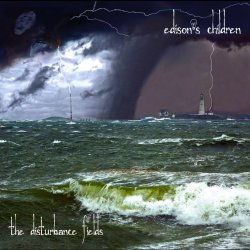 I know I ought really to have liked this album. After all, I am a lifelong Marillion obsessive, lover of lengthy concept albums and multi-suite, one-song prog-stravaganzas. Everything suggests that this should be ear-candy for me. They even have the son of an astronaut onboard, what more do we want!

However, in the spirit of non-partisan reviewing sincerity, one has to take the music at face value, give it time to digest and assimilate, then opine honestly.

And sadly, for me at least, this is a major let-down. Granted the concept is laudable: "The Disturbance Fields are the physical manifestation that mother nature's fury can take against the human race" (Season's End, anyone?). The artwork is also imaginative with some pretty photography, and I can't find any gripes with the overall production.

Pete Trawavas first became acquainted with Eric Blackmore while he was fiddling with Steven Rothery's guitar during a 2006 Los Marillos tour, if only the latter lyrical fretboard monster had been co-opted to contribute to this album. There are passages of characteristically formative baseline construction and rather distant-sounding drumming that are crying out for a soaring, slow Rothery-esque solo. Instead, it just meanders miserably without much of interest. On Random Occurence we have the addition of a persistent and eventually irritating keyboard triplet (reprised near the album's end). Of course to some extent this reflects the subject matter, which is fine, but motifs such as the background whispering on Asphyxiation fail to perk the interest.

One major problem is the vocals. Blackwood really does sound like a pub-singer, picture Vic Reeves here. Pete Trawavas, bassist extraordinaire and talented on the 6-string also whom I have nothing but the utmost admiration for, does not have a voice fit for recording. He showed this on Transatlantic's Whirlwind album, and it is no better here. Later on there is some frankly unlistenable narration during Indigenous, over a similar slow-chugging baseline to the previous tracks.

An about-turn in melody sees Lisa Wetton take on the drums during The Surge, but it's no more stimulus than when Steve H picks up his tambourine during a Marillion show, in fact much less so. Blackmore's husky narrative continues over some plaintive acoustic guitar on Into The Dead Calm, ruining it. I can appreciate the story, and to some extent the atmosphere created musically goes some way to reflecting the ideas conveyed, but it just seems to fall short. I wonder whether they were trying to recreate the vivid imagery so masterfully displayed on Marillion's amazing Ocean Cloud; it certainly feels like it.

In conclusion, I'm sure many will love this stuff, and compared to most of the dross that circulates the airwaves it is one cut above, but really five listens was more than enough for me. It is far from "the New Pink Floyd" as stated on their Facebook page. (I hope I don't get banned from any Marillion conventions now.)

Edison's Children, the group centred around Pete Trewavas and Eric Blackwood release their fourth album, The Disturbance Fields, which contains just one song, the 68-minute Washed Away.

Now, EC are no strangers to epic pieces, indeed Washed Away is only 24 seconds longer than their previously longest track, Silhouette from the group's second album The Final Breath Before November. That album has been labelled as the best thing in the band's catalogue, at least it was, until the release of this album. One can't but think prog's ridiculous obsession with long songs may have something to do with this. In reality, both of these 'epics' are a somewhat contrived amalgamation of shorter pieces, stitched together and linked by a lyrical theme. Nothing wrong with that I may hear you say, possibly because it ticks the box for that other great prog pre-occupation with concept pieces.

Neither of these things are of much consequence really, as what matters is the music, and on that score the album largely succeeds. Although somewhat overlong in places, there are some nice flourishes amongst a fair bit of filler. The first half of the album is arguably the stronger, with a great up-front bass riff on Asphyxiation/Captain's Refrain and the whispered backing vocals adding a sense of menace and impending disaster. Overall, the lead vocals are quite poor, neither of the main band protagonists are possessed with a strong enough voice to really carry the songs, and can be quite a challenging listening experience, such as on The Surge and Indigenous.

With three guitarists, both Trewavas and Blackwood, as well as 'sibling' Rick Armstrong (yes, yes, we know...), the guitar parts are varied, with some decent solos in appropriate places. Keyboard use is at a minimum, mainly for added effects. But they are not really missed, as there is always sufficient going on in the tracks to keep the listener engaged. The requisite sections of light and shade are present, although Mother Nature's wrath is a bit of an idle threat if The Tempest is anything to go by.

The Disturbance Fields is not a bad album, it's just not great and had the potential to be better. If, as the band biographies state, there was sufficient material recorded between 2007 and 2013 for seven albums, then it may be that the law of diminishing returns is starting to take effect. What that means for 'upcoming albums' (as the CD packaging states) remains to be seen.