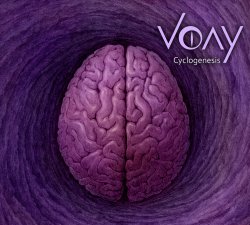 Voay is a young, new progressive metal band originating from Dortmund in Germany. The band's four instrumentalists were drawn together by their mutual love of music, mainly progressive metal, but mixed with various other metal genres. The band wrote together, and due to the difficulty in finding a suitable vocalist, they forged onward as an instrumental outfit. By 2016 they had found a vocalist, and now they have released their debut album.

Voay have put a lot of time, energy and I would assume money, into the release of this album as they don't appear, at present, to have the backing of a record label. To produce, mix and master the album, renowned German producer Hilton Theissen has been employed to cast his magic over the recording. This has helped to lift the album's quality, and hopefully the investment will provide long-term dividends for the band.

The high quality of the release extends to the packaging; an expensive-looking digi-pack, with artwork provided by Russian artist Kirill Semenov. Thankfully, Voay have used some of Kirill's more restrained pieces, as his usual style is in the same extreme vein as Clive Barker's horror work.

The instrumentalists in the band have musical talent well beyond their apparent youth. They consist of drums, bass and two guitars, with Marc Schmieder doing double-duty on both guitar and keyboards. The fact that the band, in a similar way to Dream Theater, spent time as an instrumental ensemble while looking for a vocalist, appears to reflect in the music on the disc, which is complex, mostly well developed and could easily be listened to in its instrumental form. The music is mostly progressive metal with occasional forays into other genres. While Dream Theater are an obvious influence on the band, many more can be heard. Pain Of Salvation, Wolverine and Riverside spring to mind. But Voay are their own band, influenced by a broad spectrum of music.

The opening track, Float, begins with duelling guitars backed by a tight, driving rhythm section. There are a few power-blast sections which feel out of place, but we are quickly led into a very proggy section where keyboards, echoing the classic prog era, introduce a lengthy instrumental section were both guitarists demonstrate their abilities. After a return of vocals, a very mellow keyboard lead section brings a close to the song.

Off-Course is the next track, and begins in a very mellow way, before screams fill the speakers for a short time before returning to a mellow verse, then back to screams. I hope you can tell it is very difficult to accurately describe a Voay track, as so many ideas are crammed into each song. While most individual ideas are generally very good, Voay would benefit from having a producer work with them to better bring all the ideas to a more harmonious end product.

Gravity contains my favourite musical passage on the whole album. Towards the end of the song, it slows, before very gently a Parisian-style organ comes into earshot. This develops with the rest of the band entering and dramatically builds towards the conclusion.

White Noise displays the massive potential of the band. The intro to the song has a riff which is pure class which leads to a verse reminiscent of the Red Hot Chilli Peppers. Unfortunately after this, the song seems to fall apart and lacks direction.

Six Degrees is the shortest song on the disc and is very restrained when compared to the rest of the album, and has an almost narrative feel to the vocals, which are spoken rather than sung.

Ghost Of Kindness begins in similarly restrained manner. On this track things are mixed up a bit, with the introduction of trombone into the musical mix. The track is again awash with ideas, but at times you just wish there had been a guiding hand to advise the band to demonstrate a degree of restraint.

The sound of rain and thunder introduces the final song, Cloudburst. By now Voay are beginning to demonstrate a bit of a formula to their writing, most tracks begin slowly and build towards their conclusion. For me, this is the weakest song on the album, a song which feels to be lacking the passion and enthusiasm of the rest of the album.

Now, onto my biggest issue with the work. Xil, the band's singer. Maybe I'm used to a more traditional rock vocalist such as James LaBrie, but Xil's vocals massively reduce the quality and listen-ability of the album. On many occasions he seems to be out of tune, and when his vocals are double tracked, they are almost unpleasant.

While he obviously has a wide range to his voice, sometimes less is more. At times his vocals appear to be uncontrolled, going through differing octaves without any apparent need. This means that the melody to the vocals is lost.

Another issue I have with a number of prog metal bands, is when they write lyrics that are sung at such speed they become inaudible. You can hear the singer struggle to get the words out quickly enough. I have never understood the need to write sections such as this, where any singer would struggle to sing words and make them meaningful at such excessive speed.

Voay have produced an accomplished debut release, which will, I am sure, see them finding many fans. I hope my particular reservations regarding the vocals are just a personal thing, and that it does not affect the listening enjoyment for other people. I will keep a watch for Voay's future releases, as I am sure with the help of a label and the involvement of an outside producer during the writing process, they are very capable of producing at least one classic album somewhere down the line.

Even with many different influences from each of the musicians involved in a band, it is still possible to let these influences shine through in a somewhat homogeneous sound. However, if you plan to have all of the influences stick out somewhere in the music, you could merely end up with a patchwork of bits and pieces. That was what was going through my mind when I read the press kit for German band Voay's debut album, Cyclogenesis.

At first listen, I was afraid it was going to be the latter. The many successive breaks into seemingly different styles didn't give me the idea of an album. However, hearing the album several times more, an impression of unity started to grow.

The press kit is not lying. All musical styles have a part. Sometimes this is unexpected, funny, or weird. Some changes sound a bit forced and therefore like a gimmick, but as familiarity set in with the compositions, most of these started to make some kind of sense. In many cases I still think it's like putting as many ideas as possible into a limited time frame. I had to think of the craziness that is 6:33, but Voay are taking themselves a lot more seriously.

The music ranges between soft and pretty heavy. Promoted as a prog metal band, they are certainly heavy at times, but like the rest of the compositions, this is constantly changing. Within a minute, they can go from Styx to Enchant to Savatage. Lots of djenty riffing, multiple layers of instruments forging a complex base for often intricate and sometimes very unexpected vocal melodies. Lots of breaks in Snarky Puppy jazz style.

The vocals are impressive and as varied as the musical styles. Seemingly effortless in the lower regions, the melodic vocal lines can change to a falsetto, a hard rock power voice, aggressive metal singing, even grunts, and dramatic expressions reminiscent of Devil Doll's Mr. Doctor. I do have to admit his singing in a low voice and his falsetto can be a bit of an acquired taste, and I expect several people will consider the changing vocal sounds too much of a gimmick and will distract from the results, but it is technically impressive.

The effort that has gone into constructing these songs must have been immense. And that applies to getting it all on "tape" as well. The mix is excellent throughout.

The abundance of sudden breaks and changing styles and tempo are still too much for my taste to enjoy an album from start to finish, plus the aforementioned voice going in every direction. There are a few longer sections following a pattern that keep my attention. And there are several solos (all on guitar), although I suspect that some or most of them have been written instead of improvised. Gravity is my favourite track for having a cohesion that my taste seems to prefer, but also for the choruses in an overwhelming Solstafir power.

The rating is, of course, a combination of my personal opinion and what I think of the album as a whole in the prog world of today. I do believe that with its high level of production and excellent musicianship, the more modern prog metal lovers among our readers might enjoy this a great deal. If you like your prog heavy and having a good deal of complexity but still very melodic, this is well worth a listen.