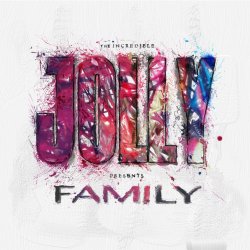 About eight years ago I learnt about Jolly. Although the heavier side of their music attracted me the most, I enjoyed the combination of rock-based, multi-layered songs a lot; plus that thing they call alternative rock, a progressive attitude in songwriting, and a good dose of melancholy in their sound.

During a six-year gap such as the one in-between this and Jolly's previous album, a band's style can change. We've been fed a new song every now and then over the past couple of years, so we knew that Jolly was still and unmistakably Jolly.

This is not a repeat of their previous album, because some things did change. The band has progressed with explorations into new territories, sometimes evoking the Galahad-esque approach of introducing some unexpected modern pop patterns and effects (Ava), while still being Jolly.

After hearing this album several times, I feel the melancholic feel to most of the songs has remained and even grown. Besides the effective, emotional touch on piano, the role of the keyboards has become bigger, both in presence and range of sounds.

My preference still lies with the heavy side. The progressiveness of the songs have a high level of enjoyment. The 10-minute Let Go is loaded with changes while retaining its cohesion. It also contains the heaviest bits on the (regular) album.

But there is also a different side and perhaps there a problem lies for someone with my taste. Where Joy (from The Audio Guide To Happiness (Part I)) was previously the most ballad-like song in the band's discography, Rain and Violet give us two such songs here, but with less of the alt-rock. In addition, sections of other songs, especially from the bonus disc, are on the softer side of their repertoire. While still offering that Jolly way of structuring a song, this is their least heavy record. I do have to give With Me a special mention not because it is also a ballad, but it's a beautiful one and has a fierce, heartfelt guitar solo.

That bonus disc (on the extended edition) does have a few surprises. It includes the heaviest song on the album in Masquerade. This might be my favourite, and not just because it's the heaviest song, but the whole thing, the crazy arrangements.

Elsewhere, For Isaac starts off rather unremarkable, but it grows into and ends with an excellent piece of post-rock. Nice!

I do like almost all of the songs (Love, from the bonus disc, just doesn't seem to do it for me), but for me the scale has been tipped by the softer side a little too much. Personally, I think I will end up mixing songs from this album with songs from their other albums into a Jolly playlist. I still love Jolly.

Jolly's fourth album, Family, is the New York City band's first release in six years. During that gap, their studio equipment was destroyed by Hurricane Sandy and the band parted ways with their record label in favor of a crowd-sourced approach via Patreon, where fans subscribe to their music on a pay-per-song basis upon each track's release.

Family alternates and at times combines elements of alt/prog metal and pop. Intriguingly, there's little in-between with this group. From one direction, there are heavy drum and guitar-driven passages, and from the other, shimmery 80s keyboard-dominated pop. Where the two styles play against each other, the contrast leads the music into unexpected twists and turns. On other tracks, the pop elements dominate and don't maintain the same level of interest. If it weren't for vocalist/guitarist Anadale's stylistically-neutral voice providing consistency between the songs, the latter songs would sound like a completely different band to the one on the opening two tracks.

The first track, Lie To Me, cleverly mixes the heavy with the pop. Opening with a jangly keyboard sample reminiscent of a prepared piano, the song shifts immediately to a crunchy alt-metal riff. After a melodic piano section that would feel at home on a Keane album, it builds to a heavy guitar chorus, but surprisingly flips in mid-air from a minor to major chord, brightening the tone and splitting the difference between the two styles.

On the heavier side, Lazarus (Space Masala) is pure alt/prog metal, with a dark, almost plodding eastern feel. Like many of the tracks on Family, the arrangement loosens up after the second chorus, allowing drummer Louis Abramson and guitarist Anadale space to add interesting elements over the established groove. For music theory fans, the exotic harmonic character comes from the implied use of the Phrygian Dominant scale, but Jolly cleverly avoids creating an overt Phrygian modal sound by de-emphasising the characteristic minor second of the scale.

Let Go is the high point of the album. Instead of a typical rock 2-and-4 backbeat, the snare hits on 2 and 3 1/2 in both verse and chorus, creating an off-balance feel. Anthony Rondinone's bass glissandi (slides) in the chorus keep the track gliding forward against the stumbling rhythm. Jolly could have simply bundled this up as a well-crafted four-minute pop/rock song, and it would have been perfectly fine. Happily though, they extend the piece over 10:42 to further develop the harmonic and especially rhythmic elements, leading to a short but searing guitar solo followed by the heaviest groove on the album, with what sounds like leg-shredding double-bass drum pedals.

The pop-leaning tracks on Family become progressively less compelling. Ava is the best of these, with a strong chorus and good musical development in its second half. Rain is a relaxed, atmospheric track, reminiscent of Flying Colors, with keyboard notes in the chorus that evoke raindrops on a roof. With Me ends the album with a relaxed 6/8 shuffle feel and is pleasant-though-unremarkable until a gritty, blues-tinged guitar suddenly joins the track; a brief reminder of the heavier tones earlier in the album.

Ultimately, Family succeeds when it blends its stylistic elements, and in Lie to Me, Let Go, and Ava, finds a sound that is distinctly Jolly.

I liked Jolly when they played in support of Riverside at the Patronaat in Haarlem in 2013. In just under 45 minutes on stage, four young, aspiring musicians, still recuperating from recent disastrous events, gave a fine overview of their first three albums. They out-did themselves on a blend of progressive metal/pop/rock with a twist, which rubbed off on the audience, bucking them up with heart-warming reactions of sympathy.

A seed was probably planted during this tour, for shortly afterwards they parted ways with their record label and started a Patreon campaign. An interesting concept of getting fans involved in supporting the band financially, getting repaid through a constant stream of new music in return. It is a form of crowdfunding, with fans participating on different levels, gradually growing into a so-called fan-based Jolly-family.

Several new songs emerged via Patreon, until it all went quiet when certain members of the band started their own families. Thankfully the bond between the band and its fans is strong, and now Family, with its album title as a token of gratitude, has finally been released. The standard edition features nine tracks, while the deluxe version offers five extra tracks.

Jolly's music has a very distinct own sound, which incorporates sounds in between pop, prog, new wave, alternative and metal. Muse and Tears For Fears flow seamlessly into Porcupine Tree and Haken while sudden outbursts into dance music (Faithless) change the scenery completely.

Take the infectiously catchy Ava that even after two visits manages to pop up into your head spontaneously for days after. It immediately sparks images of a massive dance festival with people jumping and raving along. The middle section, with heavy guitars and complex technical changes, takes it home and is a perfect showcase of what Jolly are about.

Songs like Lie To Me and Lazarus (Space Masala) are also built from key Jolly ingredients and sound like a logical continuation of The Audio Guide To Happiness Part II. Fresh, catchy melodies, (distorted) metal riffs, djent, synths and, at the heart of it all, an exemplary rhythm section of bass and drums (Anthony Rondinone and Louis Abramson respectively). Complex progressive tracks filled with pop attractiveness and sparkling keys, while uptempo rock segments lure you in, and symphonic atmospheres fill the air around you.

The epic Let Go is the Tour de Force and an instant winner. Here all elements intertwine beautifully with luscious movements, poppy strides, melancholy and metal roughness; all controlled within an open structured composition beautifully arranged from start to finish. The tangible density of the music is constantly shifting from light to heavy, while the structure is open and transparent.

The tuneful, yet whining vocals (an aquired taste) by Anadale, mostly remind me of Oasis, and on the new wave inspired tracks he occasionally sounds like Cy Curnin of The Fixx. His other asset, guitar, is particularly strong, for he plays solid riffs, refined melodies and whips out superbly-tantalising solos. The most noteworthy of these are in Lazarus (Space Masala) , Circuit Heaven and the emotive closing ballad With Me.

A smoothifying gradual change, noticeable in all tracks, is that the pop influences are getting the upper hand in Jolly's sound. Anadale’s guitars are directed more into the background, while keys and synth (by Joe Riley) start to dominate the music, underlined by bass pedals and double bass drum to supply power, which combined with the insertion of samples and sound effects, achieves an overwhelmingly warm wall of sound.

Amidst all this, intricate piano parts enlighten, while an atmospheric resonance adds substantial layers, volume, depth and character to the compositions. It does occasionally shroud the crystal clearness of the music, making it hard to differentiate the individual instruments within the complex movements. Most favourably though, it does enhance the direct pop likeability of tracks such as Circuit Heaven and Violet, although the distorted vocals of the former and the mellow tone of the latter are less appealing.

The execution of these songs, as well as Rain, is spot on, with attention to detail. I can't shake the feeling however that some of it is written on auto-pilot, within their formula, and feels rather safe. The negligible lullaby, Who Will Remember (When You Forget), acts more like a soundscape than an actual song and thus feels more like a filler.

Notwithstanding these reservations, Jolly have continued their inventive joyfulness with Family. The gradual shift towards a more pop-styled character delivers some good tracks, yet to me the songs are less memorable, and after several spins they have the tendency to sound too similar. The more complex and heavier tracks appeal more and frankly I'd wish there were more of these.

For the ones in love with Jolly, then the deluxe version is the one to prioritise. It features Masquerade which is one of the heavier tracks (incorporating industrial metal like Marilyn Manson) not featured on the single version. Anyone remotely interested can easily start out with the single version; a good album, which will surely gather more relatives into the Jolly family. Personally I prefer their older works, so will remain single, but still I like Jolly.