Here at DPRP we have a broad variety of tastes. As one can clearly see from the recently published Something For The Weekend special, everyone fancies something different, albeit with the to-be-expected occasional overlapping of genres, artists and albums. Obviously there will always be a gap somewhere, hence the 'Wanted' advert we spread out sometime ago seeking new writers to cover some of prog's more obscure corners.

One curious result of getting involved with DPRP, is that I have started hearing sounds of music which weren’t there before. And liking, admiring and appreciating them in the process of it all. All these facets and styles were probably there to begin with, but apparently stayed hidden until now. Maybe it’s the changed way I listen to music nowadays, or my age, my mind-set, lack of stress (or taste in beers), but I have the impression things have altered.

So to cut a long story short, Daal have drawn (my) attention recently by releasing three new albums. Or to be more specific: two under their own merit and one solo effort by Daal member Davide Guidoni. The music, being mostly instrumental, is filled with cinematic progressive rock, whilst flirting with Mellotron, electronics and experimental music. So let’s explore. 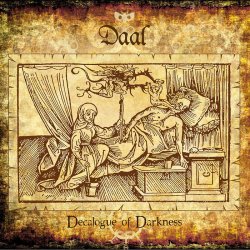 With Decalogue Of Darkness Daal return after a four-year hiatus with a compelling and gripping album. With the artwork hanging above it as an omen, it features 10 separate, intense tracks, aptly titled Chapter I to Chapter X. Listened to as a whole, they cook up a strong, impressive, cinematic landscape.

Much of this is due to the effect of the graphics enclosed in the booklet, depicting several unsettling medieval pictures of frightening, spooky, suffocating scenarios. But for anyone without these pictures, there's no denying that the music oozes exactly the same images via the abundant use of Mellotron, amidst explicitly dark music and some haunting melodies. One glance at the video included within this review should give you a good idea of what is in store.

Alfio Costa (Mellotron, Moog, piano, synth and samplers) and Davide Guidoni (drums, percussion, noises and samplers) have teamed up again with guitarist Ettore Salati, and Bobo Aiolfi on bass, making this feel more like a band effort, as opposed to the other two albums covered here. The sound resembles that of very early King Crimson, with feisty Mellotron, complex rhythms and a retro-vintage production; effectively making you feel part of the crimson court.

Chapter I sets the mood, dragging you in with its emotive, dark passages of tantalising progressive rock, reminiscent of the late sixties and early seventies. King Crimson influences are immediately detectable through exemplary bass lines and submerged complexities. For some reason I reflect towards Finch as well, though I'm content to say that this is more heartfelt in the later stages of the album, where the band displays some of this musical ingenuity.

Chapter II carries on in much the same manner. There are many deep layers, with heavy Mellotron, lots of rhythmic drums and earthy bass, whilst the piano frantically underlines the melodies. Some ambient moments, short jazzy complicated rhythms and driving rock with crafty guitars converge into slighter symphonic fragments, disturbing eruptions and complexities.

Mellow and relaxed, Chapter III initially provides some repose, with soft Barclay James Harvest touches, and even has some Yes thrown in. However the track closes in a similarly oppressive mood.

Chapter IV is equally grievous though much slower, and at this point my reservations concerning this album start to rise. If you're fan of early King Crimson, Goblin and Anekdoten, with a sweet tooth for Mellotron, then this is an album to have on your wish list. If you're not, then you will probably not make it up to Chapter V. That would mean that you will miss out on some intricate parts resembling Genesis in Chapter VIII, some sophisticated delicate symphonic prog in Chapter VII, and some piano-driven, emotive, saddening peacefulness in Chapter IX.

Missing out would be a shame, for the unrivalled Chapter X ends the album on a high note with some gorgeous, atmospheric, symphonic delights. Perfectly-executed Pink Floyd meets Finch with the Mellotron and piano in harmony and balance. The oppressiveness has changed slightly to a state of relief, and reassuringly Daal have lifted the veil of burden, to reveal one of tranquillity.

Not into King Crimson myself, I find the later part of the album, which shows more accessible progressive rock, much more appealing. The first part is quite intense and can overshadow the overall feel of the album. The quality of the compositions is undoubtedly good to superb (as convincingly shown in Chapter X), but my preference is to have something more soothingly uplifting. 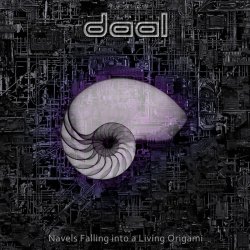 Out of the three releases, Navels Falling Into A Living Origami proves to be the most experimental one, and although the music most certainly has its appeal, it speaks to me the least in terms of creating imagery. It's the musical journey that makes up for that though, which is even better when experienced with complete silence, or if soothingly rested with one's headphones on.

The music is provided by Alfia Costa, with lyrics by Davide Guidoni, which at the very end, in a short, poetic way, cast a glimpse at what these wondrous soundscapes are about, clarifying some of the experimental musical segments this way. Aiding Costa and Guidoni, are several guests, who are summed up on the back of the album, mentioning the exact point in this one-track album of their involvement. To make things easier, I'll use these reference points as well.

Besides the Gabriel-esque vocal part by Guglielmo Mariotti (at 44:56), this features guitars, bass, oud and violin, each adding layers and depth and a comforting recognition point amongst the frequent and slightly unnerving electronic segments. Together they successfully create a wide array of different atmospheres.

Segment one, approximately the first 12 minutes, starts in a mellow, relaxed tone, with some lovely light Mellotron parts flowing amongst refined keys and some soft touches on acoustic guitar by Marcella Arganese. Slowly, experimental touches take control to reveal the first gorgeous appearance of Gilmour-esque guitar by Lorenzo Fasanelli, giving a glimpse of Pink Floyd (Wish You Were Here era). Returning shortly to Mellotron, electronic loop experimentation gradually takes over to reveal another great solo by Fasanelli at the 8:54 mark, this time surrounded by spacious synths, intricate playful drums and supported by Simone Montrucchio on bass, ending in a mysterious atmosphere.

The atmosphere shifts towards middle eastern world music, with the oud coming into play by Salvatorre Lazarra (11:32), further enhanced by some short violin insertions from Mir Khista (12:17). Personally this could have lasted a while longer and sadly these violin fragments aren't repeated later on. Shortly afterwards we glide into minimalistic electronic music (Tangerine Dream) gaining momentum around the 16 minute-mark with some hearty bass touches and uplifting drums to abruptly change towards new age surroundings, with spacious soundscapes and delicate piano.

Darkness prevails soon after with Hawkwind-ish electronic psychedelia, amidst resourceful percussion, gliding into ambient surroundings, carefully picked up by Mellotron, bass and guitars (25:04). It manages to create, however short, a mellow, relaxed, jazzy atmosphere, gliding into another soundscape altogether. Blips and loops are accompanied by unctuous guitars, cleverly morphing into another classical interlude with a beautiful piano set in an enigmatic, alien obscurity.

With Lazzara's emotive guitar settling in (33:26), we step into a relaxed and engaging ambient environment showing signs of symphonic and classical movements. Mystical, serene vocals glide into space-windy electronics (Jean-Michel Jarre), eventually pulling me towards certain Sonnentanz parts of Grobschnitt (40:32) before vanishing into sterile nothingness.

Ultimately the concept is taken full circle by revisiting “segment one” through delicious guitars, sound effects and tranquillising Mellotron, ending the journey satisfyingly.

Overall this is a strong one-track album, constantly changing moods, atmospheres and feel, and thus keeping the attention of the listener. The only downside, at least to me, is the fact that certain aspects are superbly done, but could have lasted longer. The Pink Floyd influence, for instance, is one of the nicer touches and might have been incorporated more. Recommendable for anyone into electronic, experimental progressive rock.

B-Rain - Echoes From The Undertow 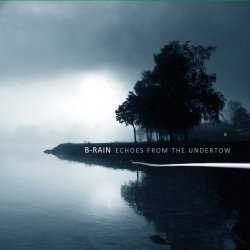 The inner sleeve with words by Kafka says it all: "You do not need to leave your room. Remain sitting at your table and listen".

Words of sound advice in this particular case, though I'll take the more comforting route of a decent armchair and headphones, being short of having the luxury of floating in a swimming pool. B-rain, the solo effort by Davide Guidoni of Daal, manages to visualise reassuring pictures of serenity and relaxation through gentle brush strokes of ambient, new age and electronic music. Besides other participants, Alfio Costa is also present on several tracks, establishing another direct link to Daal.

Solely written by Guidoni, who also administers keyboards, percussion, noises and samples, it offers an artificial, yet strikingly natural environment. Upon closing your eyes, the music carries you away to distant shores and uninhabited countries. A matter of interpretation perhaps, but living near a crowded city myself, spacious countrysides like Sweden and Norway appear, with Antarctic images of ponds and desolate islands.

On Far From The Maddening Crowd we confidently leave the rushing society behind us, with softly-gliding guitars and twinkling synths, with a heart-warming melancholic Mellotron, making you feel right comfortable from within. Once Lakeshore ripples in, Guidoni slowly but surely builds further images of a lonely, uncultivated countryside, beautifully portrayed through playful, sometimes haunting violin by Steve Unruh.

Already one can almost smell the barren shoreline with a deserted mansion, depicted on the front cover, through precise bamboo flutes, bird noises and electronic rattling noises, while the natural, delicate percussion and a distant rumbling of thunder, creates a serene yet mysterious atmosphere in Overwhelming.

Submerged and paddling softly in the water, the alluring and moving trumpet by Luca Pietropaoli enchants in Echoes From The Undertow, carefully pulling you above the water to reveal a gentle, solitary recital of emptiness on viola (Vincenzo Zitello). This magically turns into melodic Genesis, with an unctuous, graceful Steve Hackett-like guitar from Salvatore Lazzara supplying a warm blanket, whilst beckoning one to get comfy inside the mansion.

And it is here that Descending Mist, the epic track, hits the nail on the head, with a cinematic landscape that slowly fills the atmosphere with damps of mist. A vast, immense, coldness is provoked through electronic music with a likeness of Tangerine Dream and Klaus Schulze, while mysterious, spacious and chilling drops of gushing wind play harmoniously outside. At long last the fog disappears and the intricate grieving and melancholic Homeward Bound wishes you a last farewell, to silently return home, fully rested and ready for another journey.

With this album Guidoni has managed to portray a different side to the Daal universe. Less experimental and more new age and electronic in nature, where the swift Mellotron embraces are warming and give just that little hint of earthiness in between the imagery of ambient, watery tidings. Strange but true. I find this effort the best of the three. Have I really changed?

Through this trilogy of releases, Costa and Guidoni have exceeded my expectations.

The diverse, more song-structured Decalogue Of Darkness is a recommendable effort, which to my taste leans a bit too much towards the complex King Crimson side. These KC touches however add just that little finesse to Navels Falling Into A Living Origami; an album that obviously has to be listened to extensively before fully-appreciating its character.

The latter, in combination with the readily depictive Echoes From The Undertow, shows that my learning curve will be an ongoing one. With lessons already infused through Topos (Methexis) and Introspection by Residuos Mentales, these three releases formalise a perfect circle for a point of reference. One has to begin somewhere, so this starting point seems just as logical as any other. Here's to many more, including Daal's (previous or upcoming albums).