For over three decades, multi-instrumentalist and singer Gary Wehrkamp and drummer Mark Zonder have been two of the leading names on the progressive metal scene, most notably through their work with Shadow Gallery and Fates Warning.

Now they have come together to try something lighter, moodier and more personal with their new band, Zonder / Wehrkamp, or ZW.

The DPRP's Ignacio Bernaola speaks with Gary about this new collaboration and the resulting debut album If It’s Real. We discover how the two came together for the project, whether there will be any live shows, and also an update on the next Shadow Gallery album.

Read on for the interview, followed by a review of If It's Real. 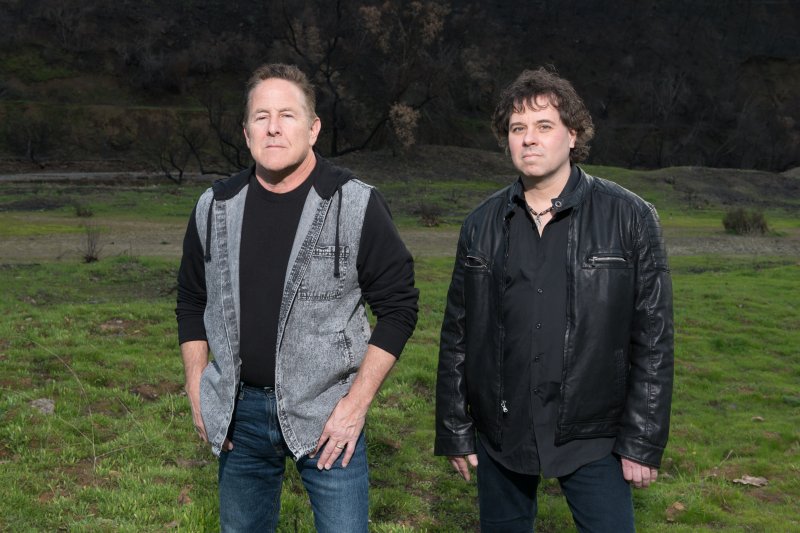 Firstly, what are your motivations behind this album? What is it about?

It came about in a bit of an accidental way. Mark and I were casually writing songs, mostly in a heavier variety, but did one with more spacious and emotional music. It began as a test with this one song and then grew to become quite a bit more personal and complete.

Tell us something about your composition method. Is it like you do for Shadow Gallery? One can still hear those great choruses and melodies as a trademark.

Basically, we start with ideas. In many cases, Mark will send me a bunch of drum patterns. I will catalogue them and sift through, and when I hear one that is inspiring to me (well, they mostly all are), I import it into my studio computer and get started. I will look for patterns at the same tempo. Sometimes I will cut a bit up and loop it. I then add, more or less the first thing that comes to my head, and maybe add some other instruments. I intentionally tried to write from a keyboard perspective and didn’t pick up the guitar right away for most of the composing.

I emailed Mark the song back and we would discuss it a bit. He eventually does another round of drums, now that he has my music to play to, and then I will add to that. The vocals mostly come later. We didn’t have a plan to write catchy chorus parts. We weren’t trying to steer the songs in a commercial vein at all, but a chorus should always have something that makes the listener want to hear it again! I did however make it my intention to NOT write or reply on many layered backing vocals. That was a challenge because I am so fond of that. This record has very few, compared to what I otherwise normally write and record.

In the credits you say you finally ended up writing simple, slow, dark songs for this album, even though you had dozens of crazy prog rock tunes. Can you tell us why you changed your plans?

We changed because, at the time, we thought we had more label interest in the slower style, rather than the heavier, guitar-driven prog style. Mark and I have covered many styles over the years writing, so it was actually a nice change for us. By the time we finished enough material, the person who asked us to write in that style moved to a different label and when the new record label heard it, they thought it was not heavy enough and ultimately passed. We decided not to shop it to anyone else and just put it out ourselves. It was a new experience for us both and I have no regrets. 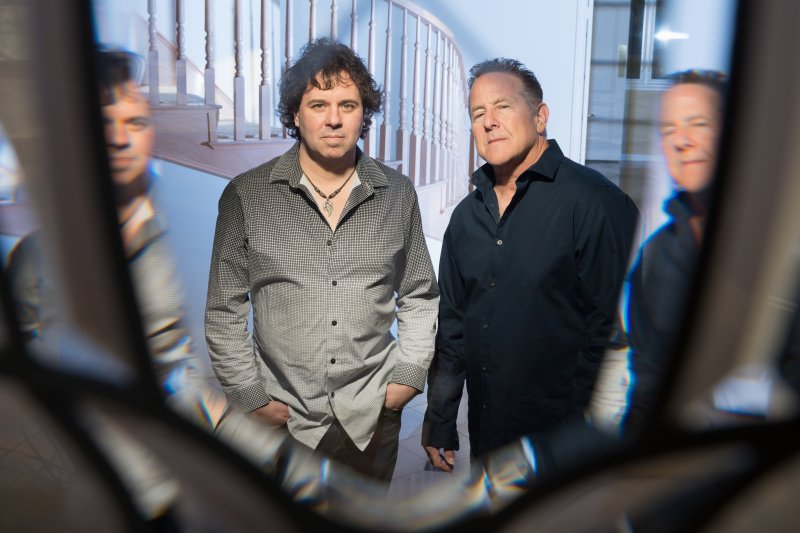 Was it intentional to have only Mark Zonder on board? Did you ever think about having more people playing or was it more like a solo project that became a duo album?

Even though I do play many roles, I never went into this thinking about a solo album. It was always to be a two-person album, if that makes any sense. Mark and I are both agreeable and compromising, and putting songs together is not difficult because we do not over-think it or over-critique each other’s work. Of course there are always a few suggested changes here and there, but he can do whatever he wants, and he gives me the same space on my end. I hope the listener can hear that honesty in the songs. Early on, we did consider a few different singers and even got started with a few of them. But in the end, I think it was quickest and most sincere for me to sing these lyrics.

Is ZW going to play the album live? I guess you have your regular jobs but do you find time to play live?

I would like that. We have other jobs, yes, all of which are entirely music related, so it would take some shuffling. I think we will wait and see if people like the record first and there is a demand to experience it live.

Do you have any plans for the future? Of course I´m thinking about one of my favourite bands, Shadow Gallery, but what about Amaran´s Plight or any other collaboration.

Well, Shadow Gallery has some new material written, but we have had a series of unexpected hold-ups, and honestly, I have not put in my usual effort to move it along, yet. I hope the key word in that sentence is “yet”. I have also been talking to John Crawford about putting out something new with Amaran's Plight, starting with just one or two songs. It is on my to-do List, but it it is not near the top. Right now, I am focusing on ZW and putting it in people’s hands.

What are your thoughts about the prog rock scene nowadays? Do you listen to new bands or do you prefer the classics?

I do not listen to anything new. I do like it when I hear more progressive elements in any style of music, but my tastes are broad and I like anything that is emotionally moving. I keep thinking that someday I will have time to stop writing and recording so I can just sit back and listen to new music. Maybe tomorrow.

Zonder / Wehrkamp - If It's Real 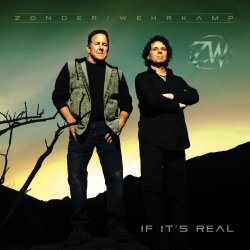 I don't remember how I got to know about this project. I guess it was Facebook itself, since it knows I really like Shadow Gallery. So this time I have to thank Mark Zuckerberg for that because I have discovered a really good album.

The letter Z of the project is for Mark Zonder, the amazing and well recognised drummer, founder of heavy metal 80s band Warlord and better known among progsters for being the man behind the drums in many albums from Fates Warning.

The W is for Gary Wehrkamp, vocals, guitar, composer and much more in the great progressive rock metal band Shadow Gallery and different projects and collaborations like Amaran's Plight, Ayreon, and James Labrie. They have been working together for many years but this time they have left apart their heavier side, and I believe they have made a very good decision.

Mark and Gary have done the entire album themselves including production and have chosen the great Rich Mouser to master it. The press release says: “This album isn’t about doing something different for the hell of it. It’s about challenging ourselves to step outside our own self-imposed boundaries and expectations and dare anyone who pushes play on these songs to do the same. This record is all about introspection and discovery. And we want our fans to take the trip with us.” So let's enjoy this trip.

The album starts with some electronic drumming, and from the very beginning you can guess this is not going to be a heavy album. It's not common to start an album with a ballad, but in this case I think it's a great decision because it's the perfect way to get you in the mood of the album.

This song is about someone losing the love of their life and one can feel the passion thanks to the great vocals by Gary and the dramatic chorus. The final crescendo part of the song is superb, with a great guitar solo mixed with the piano. A really touching song.

If It´s Real goes next and the darkness is already here. There is a great tempo by Zonder that leads to atmospheric passages and really emotive singing by Gary again, with superb choruses that remind me of Shadow Gallery's powerful moments. I think this song represents very well what they have decided to show in this album; not only in terms of music but with the intense lyrics. In this case it deals with suicide; something that is also reflected in the music video.

Guitar strumming starts I´d Do Anything and soft singing leads towards a great guitar solo and melancholic piano by the end of the song. Last Place is again about losing someone and it's a proper classic ballad including great piano playing. This one was entirely written by Gary Wehrkamp and one can guess it could be a personal experience, but in fact in some way it has happened to all of us.

The heaviest song on the album is Two Years, containing stunning drumming, angry vocals and perfect guitars that seems to be reflecting about being two years without seeing a loved person. At this point I'm starting to think this could be a dark concept album about all the stages of losing someone.

Well, it could be, but the next song, called Where Are the Children Going?, is an apocalyptic thought about all the bad things we have in this world, and which apparently we can change. Musically it reminds me of If It's Real; keeping a power ballad tempo with intense and sincere singing.

Too Late could fit into Shadow Gallery's catalogue but also should hit the radio, because it has everything to be a great song; really interesting drumming, rocking guitar and dramatic choruses and bridge.

The Next Big Thing again represents all that is good in this album; the emotion that is put into the singing, the great playing and the composition itself. I can guess that Zonder and Wehrkamp felt very comfortable working on this album, since the sum of the parts works perfectly in every song.

And finally we find an optimistic song. It's Not the End shows another kind of vibe from the very beginning before the acoustic guitar starts the final part and Gary repeats that "it's not the end", and apparently there is light at the end of the tunnel. This is a great song that fits perfectly in at the end of the album before Goodnight closes it for good. A very short last chapter of this emotional trip, that again includes Gary on the piano, leaving the door open for the future.

As I said, I don't know if it's a concept album but it could be. Do relax and listen to these great songs about difficult times and the stages of losing someone. Musically it's an amazing album performed by two of the best musicians you can find. It may not be a love at first listen, but you will find yourself discovering something new with each listen.

If It's Real is a different album, full of emotions, that should get a lot of attention, not only among prog rock fans but among everyone interested in good music. I'm sure it is going to be a personal favourite this year for many of you.