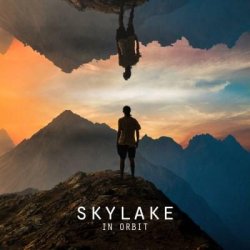 Here is yet another fine up-and-coming neo-prog band from the Netherlands called Skylake with their debut album In Orbit. Here's how they describe themselves on Bandcamp: "We are Skylake, a Dutch alternative rock band inspired by the likes of Karnivool, Anathema, Tesseract and Steven Wilson, among many others. We’ve been active since early 2015, Our debut album In Orbit is inspired by various musical styles, containing ambient and melodic, as well as more rhythmic and energetic pieces."

One of the most refreshing things that struck me about this album, is the wonderful guitar playing from Bart Laan. Never over-indulgent nor flashy but, for me anyway, he commands his instrument in such a way that it's a delight to listen to rock-based music where the guitar is both complementary and sympathetic to the neo-prog style of this band. I suspect Bart Laan is the main writer and he is a very accomplished guitar player for someone so young. He can only get better from here on in.

There are palpable whiffs of Magenta, Porcupine Tree and Anathema throughout the music, although there are no keyboards at all, and I suspect they will have to use a second guitarist for live dates. They certainly can rock and can be heavy in places, with ample guitar-based riffs.

The opening track, The Storm, is a super example of what this band is capable of. Laden with heavy riffs, syncopated, catchy arpeggios, nice little interludes with a short work-out on the drums, before progressing onwards and upwards.

Haste continues with great guitar work, varying in tempo, with some fine vocal harmonies producing a well crafted song. The guitar solos are just the perfect length and never swamp the song.

The Prisoner certainly has a “happy-catchy” pop intro riff that, with the female vocal, reminds me slightly of Blondie, before moving onto various tempo and accompaniment changes and a heavier, rockier side that leaves any signs of Blondie far behind. Once again, the guitar work excels here. This song also features a lovely violin solo that reminds me (albeit briefly) of some of Big Big Train's work.

The remaining tracks conjure up more-or-less similar material, from the acoustic workout on Smooth Skin / War Within, the rocking with fine drumming on Vicious from Arjan Laan, the folky, acoustic musings on Crossroads, and the atmospheric Luna with a solid bass line from Charlie Feld, plus some of the best guitar workouts from Laan. Now to the singer.

The youthful, angelic purity of Suzan van den Engel's vocals may be not so palatable for some die-hard progsters, who prefer a more grittier male/female delivery. Her vocals are very good, but for me just lack that sonorous quality that delivers a fuller, deeper sound. However, she is young and will develop her vocal technique and style as she matures, and as the band explores and expands on themes in future releases.

This is a very good debut album from such a young band, who have bundles of maturity in their musicianship and song-writing skills. Definitely an album to check out. I really enjoyed it and look forward to their future efforts.

The Storm is a storming opener, putting most of what is to offer on the rest of the album on display in its eight-minute run. It is a very diverse track, showing most of the elements you will hear later on. A good balance between changing melodies and more rhythmic sections, with twin guitar lines in many sections. A lack of keyboards is never felt, melodies are all around.

Arrangements are surprisingly mature for such a young band. Often multi-layered, not afraid to have different melodies compete with each other, and at times even a different vocal melody on top of that.

Van den Engel's voice has quite the range. At times you can hear she is still young, but she has a clear, full, melodic voice, and apart from a few falsetto lines, she fortunately does not sound like an opera singer when in the higher regions.

There are some darker atmospheric sections, a bit of alternative rock, then fierce outbursts and prog metal riffing, and the melodic solos are never far away. The way Skylake blend these into their songs is impressive for a debut.

I had to think of Tumbletown here and there (another Laan reference!), in the sense of the melodies and breaks, or of Dreamwalkers Inc for some of the heaviness. Vicious has a good prog-metal riff. The sudden breaks into near-silence sound a bit forced, and therefore distracting to me, but the wonderful melodic arrangements at the end of the song make up for that.

I mentioned prog-metal a few times, but overall it's more prog, or neo-prog with a heavy touch. They can do quieter songs as well. The first part of Smooth Skin / War Within and Crossroads are more like folk prog. The former builds into a heavier section, the latter remains subdued but with unexpected drum rhythms and guitar picking and a lovely vocal melody.

Luna is the most diverse track, in which the band experiments with the contrasting sections, and the feeling I got was the same as with the best tracks on the latest Tumbletown album. The band are in for something great, and so is the listener. In Orbit is a very good debut, from a very promising band.