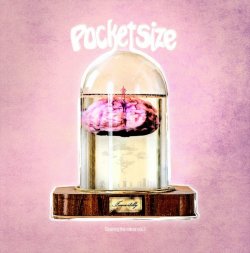 From the land that seems to offer an unstoppable stream of prog bands, here's something slightly different. A big overlap with prog alright, but touches of jazzy psychedelics and lots of improvisations. Canterbury lovers and fans of Van Der Graaf Generator-style prog take note.

Style-wise it bounces between several influences. Cyclopses And Pine Trees sounds like VDGG, Cream, and Deep Purple are jamming. And Intergalactic Explorations sounds like Stone The Crows are joining in as well. End Of The Tracks is more Caravan, delicate and soulful. No easy listening, you're being dragged right in.

The songs on this album were all recorded live in the studio, in front of an audience. Must have been quite a trip! It says something about the players pulling this off live, but I think it's also the way to make an exciting record: capturing playing live in a studio setting, with studio recording quality.

The saxophone and jazzy touch on the organ bring out the better Canterbury albums in memory. But more fierce guitar and bluesy Hammond B3 solos than the likes of Caravan, making it a more psychedelic experience. The sub-title Cleaning The Mirror, Volume 2 might have given you that idea even before you start listening, though.

With me moving to Sweden soon, I can't wait to witness these guys play live! What an exciting album.

This album features a number of live studio performances and as such, it possesses an enjoyably raw edge that beckons the listener in and then proceeds to enthusiastically clasp and envelop them in its warm fresh sounding embrace.

Cleaning The Mirror Vol 2 should appeal to those who enjoy instrumental music that contains the stylistic appeal that a combination of the blues, rock and a smattering of jazz can bring. If you have ever found the instrumental sections of the music of bands such as, Colosseum, Van Der Graaf Generator, or Atomic Rooster appealing, then this album consisting of strident grooves and atmospheric interludes has a retro appeal that will probably be satisfying on a number of different levels.

The release features some majestic organ and sparkling electric piano embellishments. The organ is often the most prominent and distinctive instrument. The combination and playful jousting between the organ and the bands duo of electric guitars and sax is one of the albums most endearing and enjoyable features.

The strident unrelenting groove of the rhythm section and the arrangements which feature organ and keys, sax and guitar, grounds much of the music firmly in the type of sound and style that was popular in the early seventies. The linear approach adopted by the band is often relentless and uncompromising and ensures that knuckles and toes can be rattled without fear of being diverted, or suddenly curtailed, by any surprising changes of direction, mood or tempo.

This reassuring fireside warming, cosy slippers and snug glove approach to composition, will no doubt find appeal and will be comforting for any listeners who might be unnerved by the eclectic jazz inflected fusion approach of other Scandinavian bands such as, Hooffoot , Panzerpappa and Njet Njet 9.

However, there were times when the uncompromising groove of the bass and drums and a propensity to drag every ounce of life from recurring riffs (which in the context of many of the tunes, is coupled with the use of a somewhat unimaginative rotation of solo parts), became a trite too predictable for my personal tastes.

Nevertheless, there is much to admire about the tunes on offer and in its live studio setting, I am sure that the music’s pull would have been captivating. There were many occasions during the course of the album when the performance of the band had me totally ensnared.

The fluidity of the first extended guitar solo that features in Clairvoyant is impressive. It wore a similar tone and had that same intensity and bite that Frank Zappa was able to bring to the table in the title track of his Apostrophe album. The second solo which breaks free later in the piece featured a more precise jazz style was less convincing but nonetheless was almost as enjoyable.

The album has a pleasing flow and this helps to accentuate its positive traits. The ordering of the different tracks really complements each other well.

In this respect, the soothing organ paddling, earthy sax interjections and slow burning fretted embers of the blues based tune Quantum Suicide offered a pause for reflection and provided just the right amount of stylistic familiarity so that a wider audience might appreciate its charms. It also provided an excellent contrast to the muscle of the tracks, which precede and follow it.

Cyclops and Pine Trees, makes a good impression as it steadily travels along its granite path. It is an enjoyable piece, which channels a Hendrix feel in its opening parts. The scratchy riff rhythms and dual guitar approach and general raw rock steady style drew comparisons with the work of Plankton, whilst the saxophone interludes gives a listener a momentary glimpse of a different route and provide a hint of an alternative style.

I particularly enjoyed End of Tracks. It is a piece that wears its jazz stylings and influences proudly as an outer garment. This helps it to exhibit an understated subtlety that is arguably missing in a number of the other pieces. The jazz guitar stylings featured in the middle part of the composition beautifully meanders, ducks and dives in a tuneful manner that complements the rich organ.

It is one of the few pieces on the album where the saxophonist is able to beckon me in fully in to his work and on this occasion the solo parts flow engagingly and offers just the right mixture of melody and puffed cheek blowing. End Of Tracks would probably appeal to anybody who enjoys some of the jazz-based stylings of bands such as, Passport.

Overall, Cleaning the Mirror Vol 2 is a very good album and one, which I am sure that I will continue to enjoy hearing. I am certain that I will return to it in the weeks ahead.