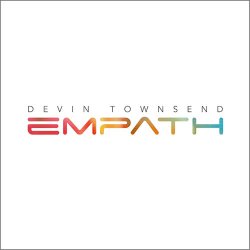 If there ever will be a Devin Townsend movie, it will have to be a catch-me-if-you-can movie with the prog police as integral part of the story’s a string, always trying and failing to arrest Heavy Devy for the crime of not taking his music too serious. Because this man never fails to find new heights musically and as a comedian, and in Empath both of his talents created a fully new level of genius and the plateau that has his throne has risen one more step higher.

Now after many listens I still find myself grinning widely and laughing a lot about the many silly things that are going on on this new extravaganza. Now that Townsend has completely turned away from the wall of sound thingy, he exaggerates in every other aspect.

It is the way of a pre-teen boy in which he looks at all possible styles that could be incorporated in his concept piece and he takes them all, but every single piece is brought to full perfection before weaving the whole thing together into one fully overdone opera. The whole thing is based on the Devin Townsend sort of metal, merged with the Ayreon universe and occasionally spiced with the epic ways of Haken’s arrangements.

By that Townsend leads us through his story in a roller coaster cabin at a breathtaking speed, going through several musical landscapes, accompanied by a gospel choir, orchestral arrangements, great synths arrangements, hens, cows, steel drums that turn into slide guitars, film score materials of various decades, Yes-esque licks, Gollum and orks, and much more. It’s almost a shame that the Oompa Loompa are missing. This fun fair ride is so colourful and cheesy that Disney Land and its sorts turn into shades of pastel on grey paper.

In all of this, the tracks Why? and Borderlands are my highlights. Why? Well, because Why? is a waltz in major chords that sounds like a collaboration of Strauß, Orff and Gershwin. It starts with the very nicely sung lines „Darling, are you feeling alright? Because you look rather pale and all our friends are watching us“, and after a while it crescents in minor chords.

The following track is a nice little up-beat shalalala-la-la song that turns into a mighty stompy Ziltoid-like metal riff. In that way Townsend has created one mini-arc that stands best for the entire album. But I bet the rest of the prog world has only credit for the 23 minutes epic Singularity.

Anyway, one can look at this new album from every possible angle, but the conclusion will always be the same: it’s an incredibly eclectic album, more of an opera than a set of songs, and the story-line is brought to perfect musical shape, both in the dramatic aspect of the concept, but also in the sense of an absolutely great humour.

I’ve been joining this round table because I was sure to hold something against the usual Devin Townsend praise. But alas, I miserably fail on that mission and all I can say is: add this gem to your playlist! It’s fun times guaranteed. Inevitable for fans of Charlie And The Chocolate Factory and The Imaginarium Of Doctor Parnassus and the best anti-depressant for everybody else.

Devin Townsend is a man who needs no introduction, having been a major figure in music for a good number of years now. From his time in Strapping Young Lad to the various incarnations of his own band (Devin Townsend Project, Devin Townsend Band) and various other projects, he has fairly made his mark. His latest album Empath features several guest spots, including a surprising vocal guest in the form of fellow Canadian Chad Kroeger.

The album has a typical “Townsend” sound, with epic choruses and an abundance of blast beats on the drums accompanied by his soaring and aggressive vocals. However, it also showcases off his more orchestral leanings on tracks such as Why?, as well as more pop sounding elements inserted into some tracks, such as the first wee while of Borderlands.

When saying it has a typical “Townsend” sound, I mean it captures elements from his entire career. You have some crushingly heavy sections, some more country or folk passages, your epic moments and the orchestral and pop leanings. It is an eclectic mix of sounds but created in that signature Townsend way. However, with his most recent live album (Ocean Machine - Live at the Ancient Roman Theatre Plovdiv) where I commented that after a while the tracks seemed to all merge into one, this album keeps things interesting. Slower moments and more atmospheric areas compliment the heaviness, and in doing so showcase his fantastic writing ability.

Borderlands is an astounding track, pulling through so many styles and emotions within its 11-minute length. From the pop intro, to the chilled and “cool” middle section, before bringing back the guitars for a chugging proggy outro.

Singularity is the album’s closer, an epic 23-minute track with an intro reminiscent of Pink Floyd’s Shine on You Crazy Diamond, before evolving into an epic that encompasses all aspects of Devin’s personality in his music. Orchestral, dark, atmospheric and light, heavy and soft. It is all here.

This is the best Townsend album, in my opinion, since Ziltoid The Omniscient. If you like any of his previous works, this will be a brilliant addition to your collection as it brilliantly showcases all his talents.