Shumaun - One Day Closer To Yesterday 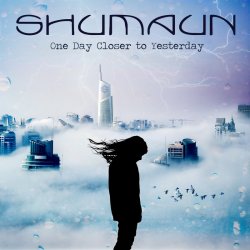 Released just over three years ago, the self-titled debut from this band out of Virginia, was an accomplished opening statement. It offered an entertaining fusion of melodic heavy rock, with aggressive progressive metal and brighter progressive rock stylings, plus a generous helping of Middle Eastern and world music elements. It quickly became one of my favourite albums of that year (article here) and is a recording that I still return to when the mood takes me.

The quartet has stabilised its line-up from that time and consists of Farhad Hossain (guitars, vocals, keyboards) and drummer Tanvir Tomal (both previously together in fellow US prog-metallers Iris Divine) alongside bassist Jose Mora and guitarist Tyler Kim. I am happy to report that musically Shumaun has kept to a similar recipe. There is more aggression, more complexity and a heavier dose of the more modern, djenty style of guitar playing. I detect little in the way of middle eastern and world music influences.

Personal favourites are the battering-ram riffing meets djent-lite soloing of opener The Writing's On The Wall, and the melodic heavy rock chorus and riffage that makes Go an essential song for my road-trips. Remember Me And I Will Remember You also has its moments.

The lighter intensity which opens Fear Is misleads the listener into a riff borrowed from Nick van Dyke (Redemption), before a mellow bridge and then one of the album's most hook-filled choruses. Complexly compelling.

Prove Yourself mixes edgy riffing with the vocal vibe of 80s prog bands. However it lacks the necessary hook and I'm not convinced by the vocal treatment and stylings. Nafsi Ammara is all about the swagger, the groove, and those dirty, grungy riffs.

In contrast to the rest of the album, the balladic Central Station is too one-dimentional.

However it's the closing track that offers the biggest talking point. Few prog-metal bands today are either willing or able to write 15-minute songs; let alone one that is made up of as many varied ideas and sections as the title track here. It is a very ambitious composition piece. Whilst I won't claim it as a classic, it is a very accomplished way to bring the album to a close.

References drift from Fates Warning and Magnitude Nine, to Shattered Skies and Teramaze. If you like your albums to have great melodies, and enough complexity to bring genuine depth, whilst avoiding showcasing, then this is most definitely an album for you. As with their debut, for me this lacks enough killer punches and hooks to be a Top 5 album in my year-end list, but it won't be too far away.

Shumaun’s recently released second album, One Day Closer to Yesterday, is my introduction to this talented band. Their brand of guitar-driven prog metal is given a twist with the addition of neo-prog style melodies and keyboards. But for me the ace card that Shumaun play is the superb singing of guitarist, keyboard player and founder Farhad Hossain. He has a strong, clear and wide ranging tenor. He can hit the high notes effortlessly and is forceful and delicate without any showboating. In this regard he reminds me of Teramaze’s vocalist Brett Rerekura from their cracking Esoteric Symbolism album. Indeed, Schumaun sent me back to have a listen to Teramaze.

Shumaun’s One Day Closer to Yesterday opens with an overture of neo-prog keyboards that ends with with a piano melody that is picked out on one finger. It also introduces that voice. Then we are off to the races with The Writing's On The Wall. A heart beat pulse morphs into pin sharp snare work from drummer Tanvir Tomal, then fast-paced metal riffing kicks in without sacrificing the neo-prog melodic sensibility. The dynamics add complexity and the twin lead guitars of Hossain and Tyler Kim make you sit up and pay further attention. As does almost all the rest of the album.

Lovely, almost a capella, harmonies (have I mentioned how much I like the singing?) introduce Fear Is. The track soon moves on to a punchy, crunchy guitar sound that resemble a more melodic Tesseract. The power keeps coming with Nafsi Ammara with Jose Mora’s elastic bass and a scorching guitar solo but Shumaun still finding the time to be delicate here and there.

The acoustic Central Station wants to be Porcupine Tree's Trains but it doesn’t have the payoff and is a bit forgettable given the standard of songs that surround it. Things get back on track with Prove Yourself. Its layered guitars make it sound like a lost punk-metal classic from Sugar’s Copper Blue, the best album released in the early 90s grunge boom.

There is a mad mash-up of a Foreigner-like AOR melody put through a prog metal shredder on Go. It becomes an arena-friendly slice of prog metal and it shouldn’t work but Shumaun make it sound effortless.

There is a low-key Middle Eastern vibe to Remember Me And I Will Remember You and its interesting guitar interplay. But it is rather overshadowed by the album’s title track and piece de resistance in all its 15-minute, multipart glory.

I lost count after seven parts because I was carried away with its complexity and vitality. And with the sheer bravado in welding the disparate sections into a cohesive whole. The track is a triumph. It moves from soundscapes through acoustic parts, piano led sections and even a minimalist systems music style slice of goodness. Where the rest of the album is focused on highly structured songs this feels looser but just as controlled. It is a terrific piece that ties up the album with a suitably metallic ending, and a coda where the piano melody of the opening track resurfaces, producing in a smile inducing and satisfying circularity.

On this evidence I should check out their debut album. But if you want melodic, hard-edged guitar driven, keyboard underpinned prog-metal with a fabulous singer, try Shumaun’s One Day Closer To Yesterday I don’t think you will be disappointed.