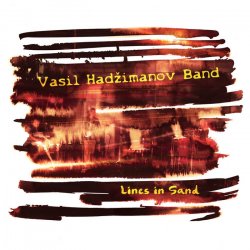 This five-piece jazz-prog band is based in Belgrade and they are led by Vasil Hadžimanov’s opulent keyboard playing. The music they produce is on the jazz side of prog with a dose of world music, rock, funk and electronica carefully placed for good measure. Their new album, Lines In Sand, is a twelve strong collection of jazz meets, well, all sorts really. Making this release a lively and interesting affair.

There are a couple of more or less straight-ahead jazz tracks. San Snova is a jazz piano trio piece. Mixing the lithe piano of Hadžimanov with delicate bass (Miroslav Tovirac) and drums (Pedja Milutinovic) evoking the spirit of Bill Evans. Then Marta Hadzimanov guests on lead vocal on the song Lost. Her beautiful voice gives way to the band for an extended period before she returns at the end. Shame she wasn’t used more on this track.

Hadžimanov comes into his own with piano and synth on a whole range of tracks. The title track’s use of Eastern European / Middle Eastern tonalities gives it some grit with the odd power chord and cool guitar solo from Branko Trijic. It’s world music meets fusion works well, as it does on Freedom From The Past. The band find their inner dancing gene on a track dedicated to their record label owner. Mr. Moonjune has a funky fusion of guitar and bass and a synth solo that is terrific.

Hadžimanov’s synths and the elastic playing of the band raise the fast-paced fusion of Ratnici Podzemlja to Weather Report levels. The Weather Report of Night Passage or Procession. Yes, it’s that good. But the best track is the piano dub-jazz of Rege Hadzi. The off-the-beat percussion of Bojan Ivkovic and the stuttering piano make this something special.

However, there is a minor mis-step with For Clara a soul jazz song featuring the soulful vocal of Dean Bowman. It’s meandering structure fails to engage me. But, as a whole, the Vasil Hadžimanov Band’s Lines In Sand is a great collection of jazz informed, very melodic pieces that flirt with prog rock, world music and fusion.

Variability is one of the virtues of Lines in Sand. Variety is what it is all about and in this respect, it is fascinating to experience how its different parts coalesce and interact with each other to create a release where each composition is satisfyingly varied, yet the album as a whole has a number of identifiable components that skilfully bind everything together.

This album portrays an interlocking scrapbook of styles in a succession of gilt-edged compositions. As a result, it seldom fails to satisfy and often delivers an exciting array of sounds that should appeal to listeners who enjoy the unpredictability of progressive jazz with outstanding fusion elements.

On occasions, some of the inventiveness and edginess that hardens the album is derivative of a style more usually associated with prog and rock. For example, there are a number of hard-hitting guitar parts and equally in evidence, there are many raunchy synth runs and flamboyant synth embellishments. The release is also enticingly shaded with occasional tints of the musical colours of the Balkans.

This influence is immediately apparent in the haunting throat warbling that dominates the title track, which opens the album in a superb manner. This piece encapsulates all that is good about this release; it infectiously straddles a number of genres and defies convenient categorisation. The interplay between the band members is excellent and the individual solo parts, which emerge on guitar and electric piano, are breath taking in their scope, feel and intensity.

Vasil Hadžimanov plays with just the right mixture of subtlety and aggression throughout. The release is generously littered with outstanding piano embellishments and twinkling solos. Hadžimanov's contributions, are never static, or locked into one particular style for too long.

One of my favourite piano solos of the album occurs in the mid part of the outstanding Lost. It just flows and creates a flamboyant groove that swallows up time, in much the same way as Chick Corea’s most persuasive piano work did, in albums such as Return To Forever's Light As A Feather. In addition to the piano, Hadžimanov also uses a rich variety of keyboards to great effect. Some of the synthesiser flourishes are magnificent and deliver an array of swirling sounds into a number of the tunes that will have prog fans salivating with delight.

The album is complex and clever in its arrangement, but also manages to display a spontaneous edge. The skilfully spun ebb and flow of the music creates a truly exhilarating experience. Although many of the compositions are fast paced, their ability to surprise, ensures that a number of the pieces utilise an admirable sense of dynamics and include many opportunities to explore contrasts between light and shade.

San Snova is an evocative piece that is beautiful and sinister in equal measures. Its power to shape moods never disappoints. In its introductory stages, it features a piano motif that is reminiscent of aspects of John Taylor’s atmospheric contribution to Azimuth. The piece also has a sparseness and gravitas associated with the style of some of Rainer Brüninghaus’ accompaniments to Eberhard Weber’s work on the ECM label. The wonderful piano interlude that offers an unexpected change of direction at the mid point in San Snova flows and fluctuates in a way in which, such illustrious players, as Keith Tippett and Tim Richards would have been pleased to achieve. In short, San Snova is brilliant in every way and sets the bar high for what is to follow.

Lost does not disappoint and its effect upon the senses lingers delightfully long after the album has been finished. It features Marta Hadžimanov on vocals. She sings with expression and verve and offers something very different to what has gone before. Her phrasing and excellent use of tone in the high vocal stratosphere creates a spellbinding counter point to the pieces loosely weaved piano accompaniment, and also to the full-bodied bottom end that emerges during the rhythmic middle section.

The blistering guitar interjections that follow Hadžimanov’s flowing solo are also magnificent in their own right, possessing the sort of flamboyance and feel that many other players can only dream of creating. The tune is accessible, but is exciting and unusually different as well. To sum up, Lost is both daring and challenging but above all, is undoubtedly quite special.

The album offers the listener a palpable sense of continuity. This is achieved by beginning a number of the tracks with the musical phrase or notes that ended the previous piece. This ploy works remarkably well and the way in which one piece seamlessly segues into the other, helps to give the album a satisfying coherence and identity. Without this technique, the albums varied style and mix of compositions might be viewed as a disjointed amalgam of pieces with nothing to link them.

Maklik is particularly hypnotic. Its funky beat moves things along relentlessly. It is one of those rare tunes, which compels a listener, to blurt out a wordless accompaniment of vocalese sounds, to complement its recurring weave of mesmerising rhythms. The keyboard layering, striking guitar strums and relentless chest pumping rhythms that are at the heart of the piece, ensure that it is a knuckle rattlers delight. Its enticing pulse is so infectious, that it is sure to create an unintentional rash of red ridged weals.

One of the most rewarding and interesting tracks on offer amongst the twelve outstanding tracks is For Clara. This piece features the deep resonant tones of singer Dean Bowman and includes a superb free blowing sax solo by guest Rastko Obradovic. It is so intense and evocative that it has the capacity to create a kaleidoscopic slide show of vivid images in the mind.

Although lyrically and stylistically vastly different, there were times when the idiosyncratic arrangement of For Clara captured something akin to the off the beat nature that runs through Frank Zappa’s Joes Garage. Certainly the delay effect on the vocals rich in reverb was reminiscent of Ike Willis’ work in tunes like Lucille and Outside Now .If that was not enough to make things interesting, the piece also channels the free flowing spirit of Weather Report in its ensemble-led concluding segment.

The rest of the album is equally rewarding and this in no small measure is down to the quality of the players Hadžimanov has assembled to realise his creative vision. All members of the band excel as a collective and impress individually on the occasions when their instruments have prominence in the arrangements.

I could ramble on about Mr MoonJune that is dedicated to Leonardo Pavkovic, the founder and driving force behind Moon June records. It is another fantastic track where the players are given space to impress. The late night sax solo is of a different voice and offers a great contrast to the woozy waves of undulating synths and intricate percussive patterns that are a feature of this piece.

To conclude, I could wax lyrically about the avant discordant nature of the short interlude tune Waiting For that has different ambience to the other pieces on the album. I could describe in detail the exotic Balkan feel that is evident in the opening section of_ Kazi Gradiska_. I could express my open-mouthed astonishment of hearing the vocal embellishments of Ratnici Podzemlja for the first time. I could go on and on and still, I would not do this excellent and varied album justice.

Lines In Sand should be, heard and experienced. The sound quality of the recording is exceptional. I strongly recommend that you check out this superb album.

If you like any aspect of progressive jazz fusion, then I guarantee that much of Lines In Sand will astound. After all, as William Cowper wrote, "variety is the spice of life that gives it all its flavour". In this respect, the different musical colours and flavours on offer here are both memorable and compelling and above all else, satisfying in every way.