Born on 22nd February 1975, Tirill Mohn is a singer, songwriter, multi-instrumentalist based in Asker near Oslo. A member of the original line-up of one of Norway’s finest bands, White Willow (who are no strangers to the DPRP), she played violin and classical guitar on their 1995 debut album Ignius Fatuus.

Since then, Tirill has released three solo albums, Tales From Tranquil August Gardens (2003, reissued 2011), Nine And Fifty Swans (2011), and Um Himinjodur (2013), although none were widely available outside Scandinavia. Reissued on the 12th October 2018 by the Sonicbond record label, they are now available in the UK and other territories for the first time on CD. This is also the first time these albums have been reviewed by the DPRP.

Although all three albums have a mellow, pastoral ambiance, variously described as indie-folk, progressive-folk, neo-classical, new age and ambient, they each have their own individual qualities. And with an average length of 42 minutes (bonus tracks aside) none outstay their welcome. Tirill composed, arranged and co-produced the music on all three albums and in addition to lead vocals, plays a variety of instruments including acoustic guitars, keyboards, percussion and violin.

In addition to her solo work, Tirill is one third of a classical-prog crossover trio Autumn Whispers, who to date have released two albums. She has also contributed to albums by other artists including Italian prog band (and DPRP regulars) Daal, song writer-producer Art Sebastian, singer Dan Kristofferson, and psychedelic combo Silly Trilly.

Tirill’s debut album was originally released in 2003 as A Dance With The Shadows on the now defunct US indie label The Wild Places, run by the late Michael Piper. Tirill reissued the album in 2011 on her own Fairy Music label, adding three bonus tracks and reverting back to what was her originally intended title, Tales From Tranquil August Gardens (even though the song titles include Winter Roses and June's Flowers!).

The songs have a haunting quality, with Tirill’s angelic voice supported by beautifully arranged and mostly acoustic instrumentation. Her singing has the crystal clear purity of Heather Findley and Olivia Sparnenn and the songs would not sound out of place as the occasional ballad on a Mostly Autumn album, although overall her style is closer to Heather’s 2016 solo release I Am Snow. Musically, Tirill is also similar to Loreena McKennitt although her voice doesn't have the same earthy folkiness as the Canadian artist.

To augment her own instrumental talents, Tirill employs several guest musicians (and vocalists), but it is her captivating voice that initially draws the listener in. Her vocal nuances range from the child-like wistfulness of Nights Are Colder, to the positively sensual Dressed In Beauty. She also has a keen ear for melody, as well as penning evocative song titles like Don't Dare To Love You and Golds Of Morning.

Whilst none of the songs necessarily stand head and shoulders above the rest, they all have their charm. Despite the title, Winter Roses has a sunny, uplifting feel whilst June's Flowers has an almost medieval flavour. Likewise, there is a Celtic ambiance that pervades Golds Of Morning.

The longest song, Vendela, benefits from rich, classical-style orchestrations and harmonious vocal support from Odd Håkon Solbakken and another ex. White Willow member, Sylvia Erichsend. Elsewhere, the coupling of Peter Kristianson’s violin and Espen Leite’s accordion on Ruby is exquisite, whilst the combination of accordion, Christos Sarakatsianos’ bouzouki and Tirill’s dreamy vocal lend a romantic, Mediterranean flavour to When You Sleep.

Unfortunately, the three bonus tracks do little to enhance the album, especially the extended, techno remix of June's Flowers with its tinny synth sound and drum machine. The instrumental version of It Was Blue does at least highlight the fluidity of Tirill’s classical guitar playing.

As debut albums go (and bonus tracks aside), Tales From Tranquil August Gardens is a superb showcase for Tirill’s immeasurable talents and stylistically it set the template for the next two albums.

Tirill’s second album, originally released in 2011 (eight years after her debut), has a more refined sound than its predecessor. If the song titles have an olde worlde flavour, it is because they are based on the works of the 19th/20th century Irish poet W.B. Yeats, with his words set to Tirril’s music. The evocative title, Nine And Fifty Swans, is taken from The Wild Swans At Coole which concludes the album.

Once again the sound is pastoral and folky with traditional instruments to the fore, including acoustic guitar, cello, flute, and violin. The sparse arrangements allow Tirill’s breathy vocal to shine through and she retains a rare gift of sounding both angelic and seductive.

O Do Not Love Too Long is an atmospheric opener where Tirill delivers Yeats’ prose in barely hushed, but beautifully articulated tones. The Cap And The Bells is as fine an example as you will find on the album of utilising a deceptively simple orchestration of cello, flute and acoustic guitar to create a magical atmosphere.

He Wishes For The Clothes Of Heaven brings Nils Einar Vinjor’s electric guitar and bass to the table, both of which are tastefully integrated (there’s no room for strident soloing here). Tirill is joined by male singer Dagfinn Hoboek for three songs. On Parting in particular the counterpoint vocals are very effective.

The Gaelic-tinged Carolan's Ramble To Cashel, inspired by a traditional Irish waltz, is delivered in spoken verse with what sounds like a traditional recorder and bodhrán backing. Before The World Was Made is a fine showcase for Tirill’s acoustic guitar playing whilst her voice has never sounded more lush than on on the multi-tracked The Song Of Wandering Aengus.

The final song The Wild Swans At Coole, where Tirill is joined by flautist and singer Audun Kjus, sums up everything that is enchanting and heartwarmingly good about this album.

2011 marked not only the release of Nine And Fifty Swans but also the reissue of her debut release, which no doubt encouraged Tirill to set about writing and recording her third album.

Compared with the time span that separated the first two albums, Tirill’s third and most recent release Um himinjǫður (which is Norwegian for About Heaven) appeared fairly close on the heels of Nine And Fifty Swans. For the first time, some of the songs are performed in her native language with Norse mythology being one of the themes.

Once again the songs are tranquil and intricately constructed, with the now familiar beautiful vocals supported for the most part by acoustic guitars, flutes, recorders, cello, and violin. Whilst Tirill provides the core vocals and instrumentation, as with the previous two albums, she is supported by an array of guest musicians and vocalists who compliment her music perfectly.

Um himinjǫður is perhaps Tirill’s proggiest sounding album to date, being more musically diverse and with the judicious integration of Mellotron and Hammond organ. Electric guitar and bass are also more prominent this time around.

In keeping with the first two albums, the opening song Voluspå underpins Tirill’s singing with a male vocal, to emotive effect. The Serprent (which has echoes of Lisa Gerrard) offsets serene verses with an uplifting, chanted chorus. Muzzled features a lead vocal from Alexander Stenerud, whose precise and melancholic English pronunciation sits comfortably alongside Tirill’s own measured performance. It also features a hint of Pink Floyd-ian slide guitar.

At a little under 10 minutes, In Their Eyes is Tirill’s longest song to date. In an album where the vocal exchanges are a highlight, she harmonises beautifully with Tonje Ettesvoll, and it's almost impossible to tell their voices apart. Once again simmering Mellotron and sensitive guitar stand out (adding a touch of early Genesis), joined by Jan Tariq Rui-Rahman’s Hammond eruptions during a rare uptempo section.

Given that five years have passed since the original release of Um himinjǫður, I for one hope that this welcome reissue will inspire Tirill to embark on her fourth album. An artist of her calibre deserves to be more widely heard and praised. 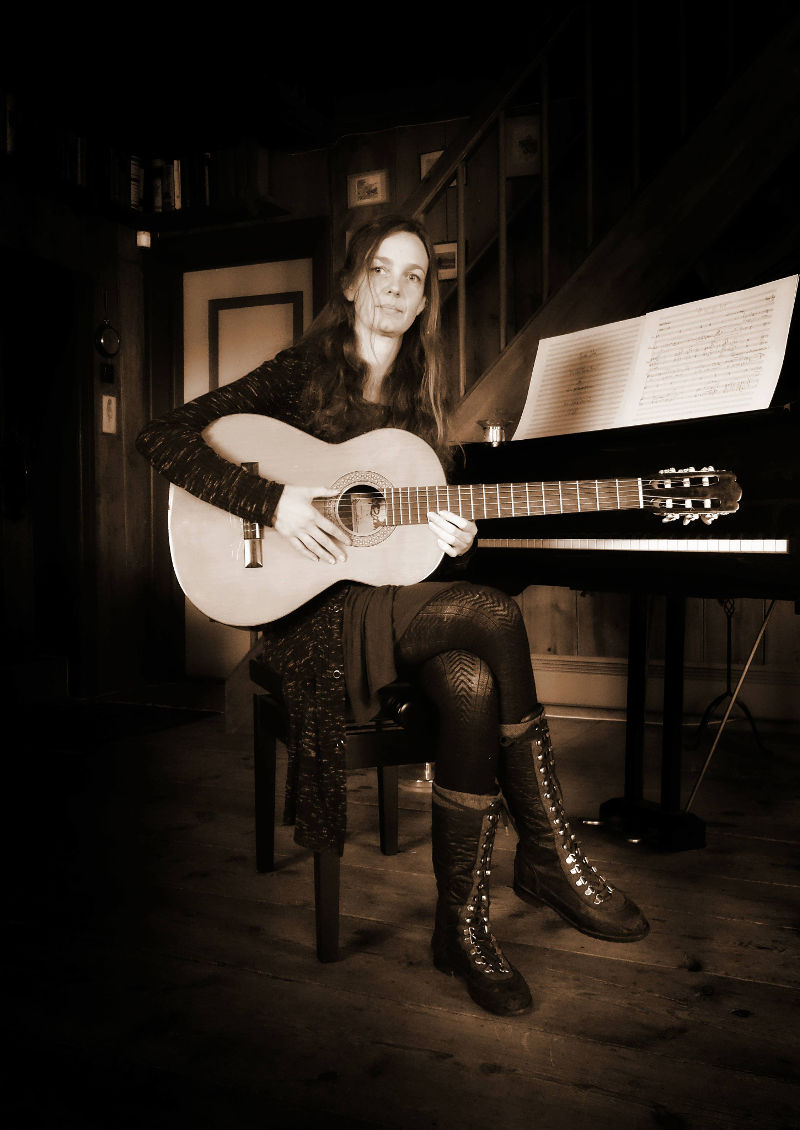