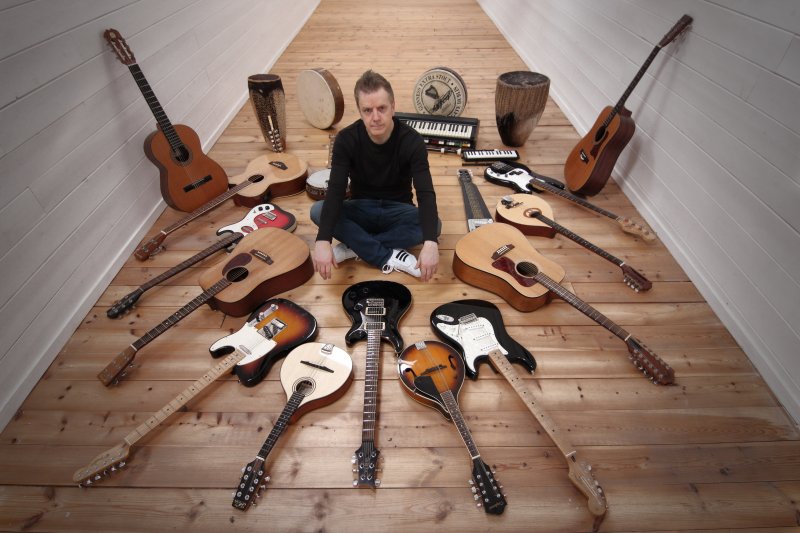 Rob, Thank you very much for taking the time to answer some questions for DPRP! Sanctuary began as a tribute of sorts, based on your admiration for Mike Oldfield. The project has since developed quite a strong following. Has the response to the Sanctuary albums surprised you in any ways?

The first Sanctuary album was of music performed in the style of Mike Oldfield in as much as it was long form, hand played, instrumental music. I made this album because nobody was doing this type of music. Not even Mike Oldfield, who had completely given up on that format for over 20 years. I made it because I loved that type of music. If you look online, there are loads of Oldfield sound-a-likes. That's the easy part. What is hard, and what takes the time, is writing melodies that can stand on their own, once the novelty of reminding the listener that it "sounds like Mike Oldfield" wears off. That is what I hope to have achieved with the Sanctuary albums.

When I finished the first album, I didn't know if I had achieved this. That is why I sent it to the man who could let me know, Tom Newman, who produced Tubular Bells. I knew that he would be honest and blunt and if he had said it was a cheap tribute, or clone, I would have erased the master tapes, and nobody would have heard Sanctuary. Instead he loved it. He said that he gets lots of recordings sent to him that sound Oldfield-esque, but this was different. He was genuinely moved by the music. In my mind, I had succeeded.

Do you know whether Mike Oldfield is aware of the work that you are doing and has he heard any of the Sanctuary albums to your knowledge?

I have no idea. He must have heard it, or at least heard about it. I hope that he sees it in the correct way. Mike, amongst many people, was a massive influence on my musical output. Mike always said that he was disappointed that nobody had carried on with the style he originated and that is what I'm doing. Taking the musical form and style and carrying it on. I have utter respect and value for his music, and hope that he sees that he has influenced and inspired me to make these albums as a mark of respect for his music.

You mention in the publicity notes that you "moved on from the first two albums" with this release. I can certainly hear that, particularly in some of the vocal sections. Also, the album has more of a modern musical edge to my ears. Was there a drive from the start to do something a bit different this time or was it an inherent thing as the writing and recording developed?

I have been encouraged by Tom Newman and Les Penning to find more of my voice on this album. Also I have gained a lot more confidence from the positive reaction to the first two albums. I just made the album without any boundaries, adding styles and musical landscapes that I loved, hopefully making something different. There are so many different influences heard, including my love of Ennio Morricone and The Shadows, which features opera singer Shan Cothi. There is spoken word supplied by Les Penning.

Again I was so lucky to have Simon Philips on drums. His playing is so good and considered. I still have to pinch myself when I hear it back as he has played on some of my all-time favourite albums, including Gordon Giltraps Fear Of The Dark, which is a massive influence on my work with Magenta. We also have Troy Donockley playing pipes, which adds so much emotion to the music. Sonically it's also different. Tom Newman has been a massive influence on my work over the last couple of years. He really has pushed me to make the music dynamic. With computers there is a tendency to strive for sonic perfection. This comes at the cost of feel. So I have really pushed myself to create something really dynamic and colourful.

I love this type of long form, mostly instrumental music and was happy that Mike himself recently jumped back into the fray with Return To Ommadawn. There is also the Ryan Yard album from last year that I am a fan of. It is great that you are carrying the torch forward on this great style of musical art. Music is cyclical, so do you see a time when long form music of this type will be more prominent?

It was a surprise to see that Mike made Return To Ommadawn. It was just as I had released the second Sanctuary album. I really thought that he had given up making that type of album. I liked the album, but I think that every musician needs an outside opinion to encourage to you make things better, and to be a sounding board. That's what Tom Newman did on Tubular Bells and various players on the original Ommadawn brought their different musical styles to play on the direction of the music.

I'm not sure if there will be a resurgence of this style of music. To do it justice you have to be committed to making it, financially and emotionally. It's not something you can knock out in your bedroom, no matter how good the equipment is. What makes Tubular Bells so good is the real instruments, hand played, by somebody who gave 100% to the music emotionally. That comes at a cost.

You also recently released a very entertaining rendition of the Dr. Who theme. The fan base of the show is reverential of the series and your version was certainly respectful. What type of feedback have you received on it and are you are a fan of the series?

The Dr. Who single came about as I was asked to do a spoof version for a graphic artist friend. I expected to take a few hours to do it, but ended up taking a few days. It turned out really well. I asked Tom Newman if he fancied mixing it, which he did and he transformed it , adding all the mad vocals. Then I asked Les Penning, who is a massive Dr. Who fan, if he would play recorders on it. It really came to life. The promo video was a mad laugh to make, with Les playing Dr. Who and Tom Newman playing his archenemy. Listening to Ommadawn as a young boy, I never thought I would be involved in such madness with two of my musical heroes. Amazing!

You have somewhat recently mentioned work on a new ChimpanA album, which is exciting news. The first was brilliant. Is that something that fans can expect in the near future?

I love the first ChimpanA album, it's one of the best albums I've been involved with. Weve almost finished ChimpanA II. It's taken almost 10 years, just because everybody is so busy. Were all really pleased with it. Again I think it's truly progressive, as in it's an album made without any boundaries. There is such a mad selection of musical styles, that shouldnt work, but do. So many colours. Again we have Steve Balsamo and myself writing most of the material, and Tony Dallas returns with his spoken word. It's nearly all mixed and will be out by the end of the year at the latest.

Thank you very much for taking the time to answer these questions for DPRP. I know it is always a bit greedy to ask this question when speaking about a new album, but are there any other musical endeavors from you on the horizon that fans can look forward to?

I'm looking at ideas for another Kompendium album at the moment. Also I have ideas for the musical direction of the new Magenta album. So, lots to do!

DPRP: Thank you again! We at DPRP truly appreciate the work that you are doing and all of the great music that you are bringing to the fans around the world!

As much as I appreciate the fact that there is a vast selection of new progressive rock available these days, the long form musical style originated by artists like Mike Oldfield has been in short supply over the last few decades. When done well, there is something truly magical about this particular form of progressive music. With his Sanctuary project, Rob Reed has thankfully brought some attention back to this cinematic approach to music.

Initially, the overt similarities to Oldfield's existing work tainted my view of this undertaking. Ultimately though, I was won over by the performances, the songwriting and the strong production of the first two albums released under the Sanctuary moniker. Plus, Rob Reed has never denied the inspiration and the respect that he has for the man who created Tubular Bells and many other great recordings. At some point, I began to ponder just how I would react if Mike Oldfield himself had created these Sanctuary albums. Though I may still question the familiarity of the material, the fact is that I would do handstands of joy.

That statement certainly applies to this third release in the project. In many ways, the album leans musically towards the late 70s and early 80s Oldfield sound, which is a personal favorite era. That said, Reed also moves a bit farther away from creating a clear homage by injecting more of his own sound this time.

The two-part title track is a joy to listen to. It contains some truly adventurous and blissful musical moments. Several of which are driven by the wonderful drumming of Simon Phillips. Special mention also goes to the superb vocal arrangements. The entire piece is filled with impeccable choral segments and the melodies that Reed creates throughout are truly captivating.

Perhaps the biggest surprise of this release is the above average quality of the second disc. No collection of throw away tracks, this bonus CD includes the excellent Moonsinger Suite. Reworking and even modernizing sections of the main epic, this disc stands on its own. The third track, Perpetual Motion is particularly outstanding. Also included is the Tom Newman mix of the main album, which adds an alternate listening opportunity.

Easily the most entertaining of the three albums, Sanctuary III is musical treat across the board. It is a complex work that is performed and produced to perfection. Yes, it still owes a large debt of gratitude to Mike Oldfield, but comparisons only carry the music so far. Without substance and merit of their own, the Sanctuary albums would fall completely flat. The fact that they succeed artistically is due solely to the talent of the man who created them. Like its predecessors in the series, Sanctuary III won't win awards for originality, but it matters not. The album is a significant achievement that is Highly Recommended!