With the release this week of a new solo album and a forthcoming one-man acoustic tour, progressive rock giant Neal Morse speaks to the DPRP's Patrick McAfee about why he felt it was time to do something very different. The American musician looks back on his recent tour supporting The Silimitude Of A Dream, reveals if he will be taking questions or requests on his forthcoming solo tour and explains why he is a little partial to some Ed Sheeran. Read on for a full review of Neal's new album: Life And Times. 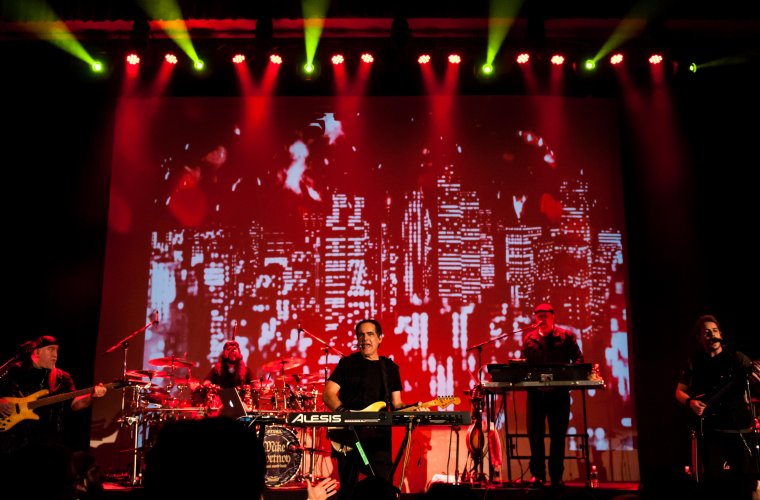 [DPRP] The most recent Neal Morse Band album The Silimitude Of A Dream was incredibly successful and resulted in some of the best reviews of your career. The concerts around it were some of the finest and most enthusiastically received of your career too. Did the overwhelming response to the album surprise you in any way?

[Neal Morse] Not really. I think we knew once we finished the album that it was very special. The thing that surprised me, was how it delivered every night on tour. It changed me in a way. Because I realised it was the piece itself that delivered. Not us. Every time we hit the end-section, everyone was on their feet and there were a lot of tears in the audience. It was very moving. Every night. It’s just a powerful album and it was wonderful performing it.

Life And Times, with its singer-songwriter approach, is certainly a change of pace from your more recent releases. That said, I think it contains some of the best, more accessible songwriting of your entire career. Why did it feel like a good time to record and release this album?

I heard it said once that each generation is reacting to the previous one. I sometimes feel like my albums are a bit like that. I really enjoy doing something that’s very different from what I’ve last been working on. In 2017, I was performing the Similitude Of A Dream in the evenings, and I was really enjoying writing these simple four minute songs during the day. In addition to that, as I’ve gotten older, I find myself gravitating towards records like Jackson Browne’s The Pretender, or John Mayer‘s Paradise Valley. I find myself listening to records like that more and more in my spare time, so, of course I wanted to make one. But really, I’ve always loved those kind of records and I’ve always wanted to make what is the the best singer-songwriter album for me, the best that I can do, and I really feel like I’ve achieved that with Life And Times.

The accompanying tour looks to be a completely solo affair, which seems appropriate considering the singer songwriter nature of the new album. What can fans expect from the shows?

Expect the unexpected! Jon Anderson said that to me about the Wakeman and Rabin tour. I had a chance to get together and talk with him about it and that’s what he said. And that’s what I say about this! I’m going to be changing it up, and it will be different from night to night. I may take requests, I may not. I’m already getting requests via the internet and it’s really cool. Somebody said “please play Emma in Seattle!” And so I probably will. I might even take questions from time to time. I’ll be playing a wide variety of music from my entire career. Probably Life And Times stuff but, who knows? I’ll be working in some Spock’s Beard and Transtlantic and maybe some Flying Colors from time to time as well. I’m really looking forward to interacting and telling some of the stories behind the songs and getting to know people in these different places in the world. I’m also doing quite a bit of looping, which is a new thing for me and I’m trying to not to get carried away with it. I’m looping everything: guitar, keys, vocals and it’s really interesting and fun for me. It’s a great new adventure!

Life And Times is very diverse, both lyrically and terms of its musical styles. This variety and the storyteller aspect of the lyrics creates a cinematic feel to the album in my opinion. Did you have an overall vision or concept in mind while writing and recording, that resulted in the depth and scope of the finished product?

No, not really. These are all individual thoughts. No grand scheme. In fact, I recorded originally 19 songs and had to pair them down. I will also be performing on occasion some of the songs that got cut from the album during the Life And Times tour.

Though you often get asked about your progressive rock influences or current prog artists whom you like, who are the non-prog artists who most influenced you? Also, are there current artists in other musical genres who you are especially impressed with?

Sure! My favorite artist of the last 15 years is John Mayer. I really love his Born And Raised, Paradise Valley, and most recent albums. I think it’s just really fine song songwriting, great performances, and great, subtle production. In fact, I sent Rich Mouser a few tracks from those records to give an idea of what I wanted Life And Times to sound like. On the Christian side, I like a lot of the songs that Hillsong United have put out and Matt Maher. I still listen to old Harry Connick and some Ed Sheeran.

Neal, thanks again for taking the time to answer these questions. I think the fans are really going to enjoy Life And Times and I will certainly be recommending it to many of my non-prog music fans as well. Thank you for another great album and for all of the wonderful music that you have given us over the years!

Thank you SO much! I really appreciate you guys and all the great work that you do! God bless.

Track List:
Livin' Lightly (5:02), Good Love Is On The Way (3:52), Joanna (4:34), Selfie In The Square (3:55), He Died At Home (4:58), She Changed Her Mind (4:01), Wave On The Ocean (4:12), You, Me And Everything (4:35), Manchester (4:08), Lay Low (3:59), Old Alabama (4:47), If I Only Had A Day (3:42)
In 2016, Neal Morse released arguably the best and most successful album of his solo career, The Similitude Of A Dream. Epic and progressive in the best sense, the response to the album and the accompanying tours was enthusiastic. It is safe to assume that he garnered some new fans with its release. For such recent converts, the polar-opposite musical nature of Life And Times may come as a bit of surprise. It is by no means a prog album, and nor does it aspire to be. Long-time fans though are certainly aware of Neal's ability to write and perform a strong, straightforward pop/rock song. Previous solo albums like Neal Morse and It's Not Too Late are a testament to that.

Life And Times is occasionally similar to his previous, more accessible works, but it is a 'singer-songwriter' album in the true sense of the word. There is a mature, relaxed storyteller vibe to the material, one that distinguishes it from anything Neal has done before. This collection of songs bears the worldly stamp of an artist who continues to expand his musical horizons. Neal is a fantastic musician, but the true core of his success and high standing in the prog scene is the strength of his songwriting. That inherent ability to write an indelible tune, is central to the success of this album.

In a true story-telling sense, these 12 tracks display a variety of musical and lyrical moods. He Died At Home provides a sombre and effectively thoughtful moment, but overall the album feels optimistic and upbeat. Livin' Lighly, Good Love Is On The Way, Wave On The Ocean and Manchester are toe-tappers in the best sense, and there is a breezy, infectious slant to many of the songs, something that is very pleasing. Reflective tracks such as Joanna and Old Alabama are wonderful examples of Morse's ability to create relatable lyrical set pieces. The duet vocals on the latter are especially memorable. Also, the country western stylings utilised on a few songs is a noticeable change for Neal. It is showcased most effectively on the pensive album closer, If I Only Had A Day.

While we await Neal's next prog extravaganza, Life And Times is an entertaining excursion into very different musical waters. It won't induce air drumming or the awe of musical chords that can accompany his progressive recordings, but it nonetheless offers significant rewards for the listener. There is an edge-of-life experience, and an indisputable quality to the material that cements this album as Neal's best non-prog release.
Conclusion:
Patrick McAfee: 8.5 out of 10
Album Reviews