This is their second album, which is encouraging given that the band members have commitments outside of Damanek, and Guy’s last project United Progressive Fraternity (a collaboration with Timms’ ex-Unitopia partner Mark Trueack) have to date released just one album. The 2017 Damanek debut CD On Track was very positively received by the DPRP and the prog community at large. Damanek will also be touring Europe and the UK in November and December, co-headlining with Southern Empire (Timms, Green and Arnold perform in both bands).

Guy’s heartfelt tribute to the historic Sicilian hilltop town of Ragusa is an impressive opener, with a bold and beautiful guitar intro from Machin, Timms’ lush symphonic backdrop and Manning in fine vocal form throughout. Skyboat maintains the theme of travel, alluding to the album title and artwork. Rhythmic piano and exotic percussion gives it a latin flavour, with Arnold and Timms' tasteful seaboard and synth exchanges. The heavenly choral backing is courtesy of The Gospo Collective and Jones Commentary Choir.

Swirling electronics and moody Gilmour-esque guitar lends a Pink Floyd ambiance to the intro to The Crawler, which switches from sombre verses to a surprisingly uplifting chorus. Solid bass playing from Mash, a typically tasteful sax solo from Arnold and impromptu organ and guitar solos takes it into jazz fusion territory. It is a track rich in diversity that would have sat very comfortably on a Tangent album (when Guy was with the band).

Guy is credited with all music and lyrics on the album and the quality and breadth of the compositions is a testimony to his songwriting. Having followed his career over a succession of excellent solo albums, for me this is probably his best work to date. His singing has never sounded better, due in part to Sean’s superior production.

The tranquil Moon-Catcher features Guy crooning poignantly to Arnold's exquisite sax, Machin’s beautifully restrained guitar and Timms’ rich orchestrations. In contrast, The Crossing rocks along at a lively pace, allowing Azaria, Arnold and Timms to shine with some superb (but never overblown) violin, sax and synth exchanges respectively, around the halfway mark.

The album's centerpiece (or more accurately the final 30 minutes) is the three part epic Big Eastern, which both musically and lyrically takes the listener on a global journey from rural China, to the mean streets of urban USA, stopping off in indigenous Australia along the way.

Part 1 - Cruel Skies opens appropriately with a haunting oriental theme that would not sound out of place on the soundtrack to a China travelogue. Add an infectious chorus, a stylish piano solo, beautiful violin, a full blooded guitar and organ section and a symphonic finale, and you have a self-contained mini-epic in its own right.

With its indigenous percussive effects, Part 2 - The Shaking Earth places the listener in the Outback until a mass of Rick Wakeman-flavoured keys appear on the horizon. It builds to a powerful, and dare I say funky, ‘horns’-driven mid-section. Following a middle-eastern ‘flute’ and sax interlude, it builds to a Gospel-tinged choral peak, before ending as it began with Timms’ sampled didgeridoo.

Part 3 - A Life In Chinatown opens with another bright, oriental melody, although now with a more contemporary feel to accompany Guy’s graphic description of life and troubles in Chinatown (Bruce Lee and Jackie Chan eat your hearts out). It is a stunning combination of vocal imagery, exotic rhythms and melodies for one of the most original and memorable codas to grace a prog album.

Strong on melody, arrangements and musicianship, this is everything a good prog album should be, combining rock, jazz, orchestral, world music, funk and gospel influences. This is delivered with a distinct lack of pretension, remaining easily accessible and infectiously listenable throughout. My opinion was made up after the first listen and hasn't wavered after several weeks of repeated playing. 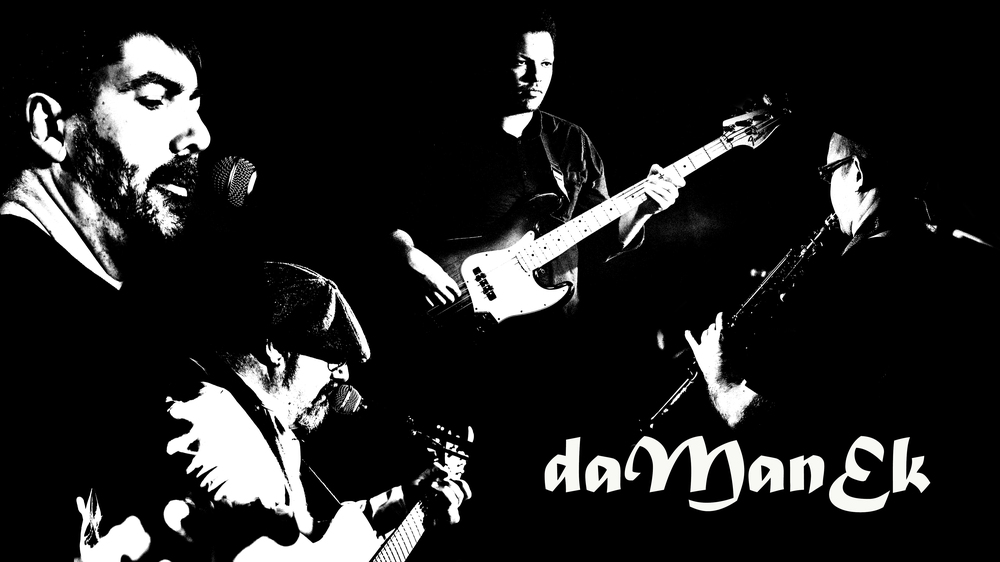 The old saying: If It Ain't Broke, Don't Fix It certainly applies to Damanek and their follow-up to 2017's On Track.

The core of DAn Marsh, Guy MANnning, MarEK Arnold and Sean Timms (keyboards, backing vocals, guitar) (a name change to DAMANEKSE must surely be on he cards) and guests Brody Green and Luke Machin is maintained from the debut, with Manning taking sole control of the writing. There is no mistaking Manning's voice, although it always surprises me how light and gentle it is for such a large man. Looking at him, one would expect a full and rounded tenor voice booming out! His idiosyncratic, and quite charming, vocal lisp sets him apart from most vocalists.

Although the songs are the work of one man, what differentiates Damanek from the albums released under his own name, is the input of his fellow band mates. It is not a case of Manning calling the shots and the band playing what they are told to, it is a definite case of each musician creating his own part, and the group working together to enhance the basic structures.

As one would expect, the music is very melodic, and the assembled host of backing vocalists add new dimensions, particularly on Skyboat. Unashamedly prog in outlook, conception and deliverance, tracks such as The Crawler make no bones about showcasing the talents of the musicians in a series of solos, that essentially comprise the second half of the song. Even the 'obligatory' ballad, Moon-Catcher, avoids falling into syrupy sweetness thanks to some sublime playing from Arnold and Machin.

The combination of saxes and violin, the latter courtesy of Raf Azaria from the United Progressive Fraternity, adds a rather jam-like element to The Crossing, particularly when Timms' keyboards join in, a wonderful looseness prevails that sounds like it was improvised in the moment. It takes considerable talent to make composed music sound so free and easy.

Although Big Eastern is listed as the final track, its three constituent parts are tracked separately on the CD. To be fair, each part does stand up pretty well as an individual song, particularly Part 2. True to the song's title, there are a lot of oriental themes running through the first part, which is itself split into three sections (I. The Good Earth, II. Intermezzo - Following The Sun and III. Once Upon A Time In the West). It could only happen in prog! The intermezzo fulfills its dictionary definition of an independent, instrumental composition placed between sections of a larger work, and presents itself as a largely jaunty piano piece that leads into the more occidental music of the third element of the first part of the final song (keep up!). Again the choir adds that bit extra, and the final Hammond-esque and guitar solos round things off nicely.

Part 2: The Shaking Earth is the big number that builds adding instruments, rhythms and melodies as it moves along. The vocals are over-and-done-with before the five-minute marker is reached, leaving lots of time for solos and instrumental meanderings.

I actually would have preferred the album to end at this point, as after such a great performance by the band, Part 3: A Life In Chinatown is rather disappointing. The programmed drums, the oriental themes, the awkward lyric that doesn't seem to settle comfortably with the music and the rather inferior chorus is not the best way to end the album. Unlike The Crossing, the music seems rather forced and nondescript, although Arnold does his best to resurrect things with a doubled solo.

Even if you exclude the last track (and I would recommend that you do), you still get over 54 minutes of fine music by accomplished musicians. In Flight sits nicely alongside On Track, and is a consistent start to what one hopes will go on to become a fine catalogue of work. 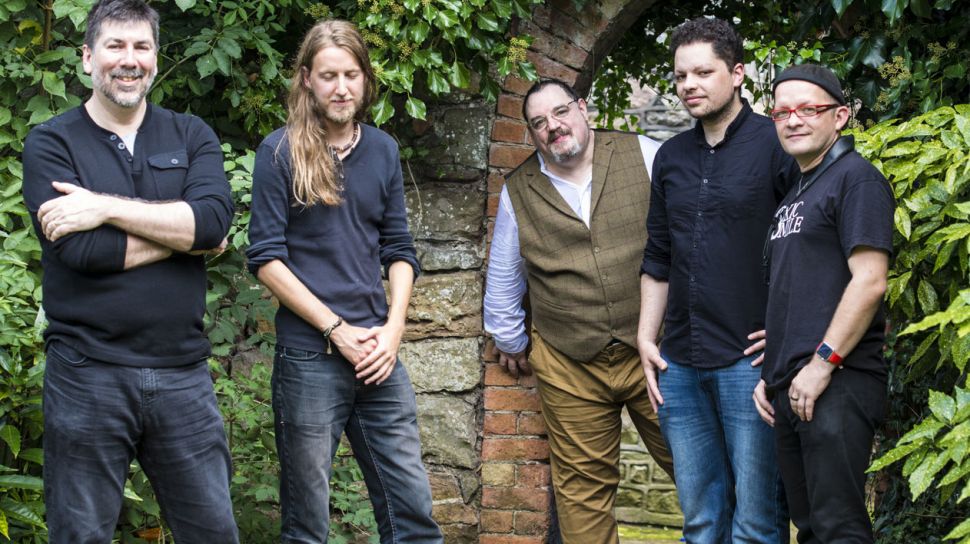 With their 2017 On Track album, Damanek made an impressive entrance in the music community. I almost wrote 'prog community', which is true, but I'm sure their open and world-like style also opened a few ears to the non-prog community.

My Future Feature radio show dedicated a special edition to that album, as well as a recent edition on this new release; an edition that had three times more listeners. So, let's say Damanek's fame has grown a lot. People have got curious for more and that's an index for quality. And I can't and certainly won't deny this In Flight album is also three times more tasty than the previous On Track album.

The first listen was a direct hit. Very impressive compositions, smart lyrics and overwhelming musicianship did not have to penetrate my ears and mind, but simply flowed in and hit the heart. From eight songs, of which three are part of the epic Big Eastern, I think five will be among my top 25 best prog songs of the year.

The album opens up with floating guitars of the modest-yet-flamboyant Ragusa. It's followed by the South American vibe of Skyboat, by means of its timbre and percussion. Keys and wind instruments top it off. Brilliant.

But then we jump into a much darker world called The Crawler. Guy Manning's voice drags this song into your mind and you can't escape listening to it, until woodwind again tries to let the sun shine in between dark clouds. A little guitar solo fights back, but woodwind wins, and with the help of the impressive bass-line gets us all relaxed again, especially when some jazzy keys and guitar get in, ending in a crescendo with some amazing riffing.

Now when the sun gets down, Moon-Catcher comes along to ease us up a bit before the second half starts. The Crossing kicks in steady and powerful and doesn't allow you to go or wander off. Damanek impresses to the max.

The Big Eastern track is a half hour epic, divided into three parts. Of course you should listen to those as one track, one adventure, but they can easily be listened to separately. I have no idea how Guy Manning, composer, did this. He must be a sorcerer. Part 2 - The Shaking Earth, including some delights from the Far East, is the absolute highlight of the album. An album within an album really.

Glory to Guy Manning as a composer and musician, to all choir singers and to all musicians that have master their instrumental parts so brilliantly. Together they have merged their creative hearts into one set of delightful songs that have made my eyes produce a tear every now and then with an impressive world-prog album. I will see Damanek live soon and will probably shed some more emotional tears.

For the latest info, check the Damanek Live Page!