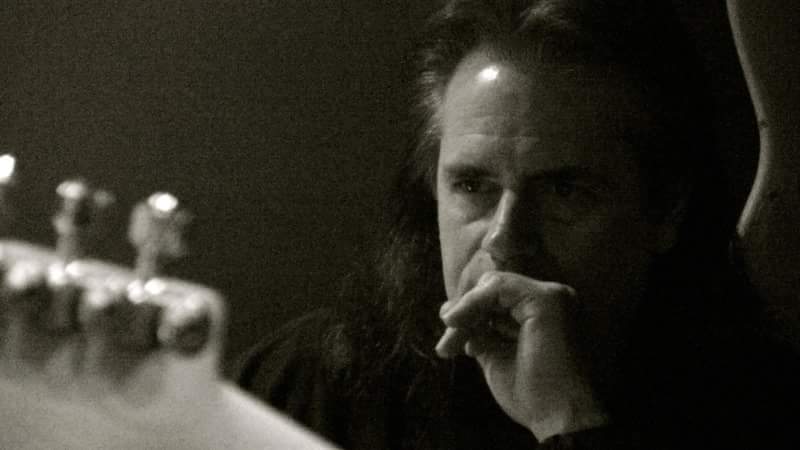 Dave, thank you very much for taking the time to answer some questions for DPRP. It is truly appreciated!

Noise Floor provides the listener with many of the classic Spock's Beard elements that fans love, but there is also a more urgent, accessible feel to many of the tracks. In fact, each of the last few albums had distinct qualities that differed from previous releases. Does the band consciously go into each album thinking about what they can do differently or is it more of an inherent thing that comes out in the writing and recording process?

Dave Meros: It just happens. The various songwriters just write when they are inspired and they follow those inspirations. Especially John (Boegehold), he writes constantly and he writes across many different genres. Before we dive into each new album we pass around demos of what everybody has written, in various stages of completion, that we think might be a good song for Spock's Beard, and choose the songs from that. We have an idea what the band sound and style should be but there is quite a bit of latitude within those guidelines.

Since Feel Euphoria, Spock's Beard releases have contained examples of your excellent songwriting ability. Is there a chance that we could see a solo album from you at some point?

I had toyed with the idea at one point but decided against it. I guess I realized it would be more of a vanity project than anything else, and for me that's something that would actually dissuade me from doing it rather than encourage me.

As it relates to songwriting, in the early days of the band, Neal Morse was the primary songwriter. Since that time though, each member (along with collaborators like Stan Ausmus and John Boegehold) plays a part in the song writing. How does that process work and how is the final decision made on what material to use?

Each guy comes up with ideas in his own little man-cave and develops them to a point. Sometimes it is 100% developed by the time the rest of us hear it, sometimes it is just a basic idea that needs a lot of development. If they are ideas that are still in development, then if we like the idea, either the songwriter finishes it up on his own or more people get involved to help finish it.

This album had more of those collaborative efforts than any previous album that we've done. The final decision on what material gets used is a sort of a dysfunctional democracy, I guess you'd say. We all vote and the guy or guys who are the loudest or angriest usually wins. Just like politicians here in the U.S., haha!

As a fan since the early days of the band in Los Angeles, it is hard for me to believe that it has been 23 years since The Light was released! That said, Spock's Beard played a very big part in the resurgence of progressive rock in the 90s that continues to this day. What is your opinion of the current state of prog and the music industry in general?

Yeah, it is a little crazy to think that the band has been around that long. We never feel that we've been a big part in anything, but I guess we were indeed one of the bands in the 90s that rekindled the prog scene, so that's a pretty great honour for us!

I have a split opinion on the state of prog and the music industry.

First, the musical capabilities of the bands and players these days is astounding. The level of musicianship since the 90s has risen incredibly high. Also the ability to record a great sounding album for almost free has really opened the doors to everybody, and the internet has allowed people who live hundreds or thousands of miles away to collaborate.

On the other hand, I think all this musical virtuosity has come at the expense of song quality. Once you have learned how to create a complex arrangement, or play blisteringly fast, it's really easy to fall into the trap of using those techniques to impress people instead of creating a great song, or playing something that comes from the heart.

I hear more and more of this, and I fear that's going to create a situation eventually where the only people that will want to listen to it will be other like-minded musicians who have also fallen into that trap of who can play the fastest, who can write the most complex arrangement.

Unfortunately, now that we're at a place where the level of musicianship is so high and the quality and accessibility of recording music has never been higher, we are facing a serious deflation in the music industry, so most of these extremely talented kids aren't getting a chance to make it their career.

I could write a book about this, or talk about it for hours, but in just a few words I would say that it's a natural evolution of things. The same thing (technology) that allowed the music industry bubble to start expanding in the 60s has now created the conditions that we're seeing today.

I admire that Spock's Beard are always thinking forward musically while still being respectful of their past. For many years, the fact that the band was never able to tour the Snow album was something that sort of hung in the air with fans. The reunion shows a few years back (as well as the CD/DVD release) significantly resolved this situation. Did you feel it was important for the band to close this unfinished chapter in their history?

I'm not sure how important it was in the grand scheme of things, but it was incredible and very satisfying to be able to do that. When you realize that statement is coming from me, someone for whom Snow is not even in the top 10 of my favorite Spock's Beard albums, that's a pretty strong sentiment. Getting together with all the guys, all past and present members of Spock's Beard, it was really great. We all fit together like pieces of a puzzle, and the seven of us had a synergy that was greater than any single version of the band.

I think the timing was right as well. The production at the Nashville show was top notch, and the DVD turned out really strong. I think the live version of Snow is more powerful and better sounding than the original studio version. So, yeah, it was a great experience, and it was a highlight in my career.

In my review of Noise Floor, I mention the strength of the performances by each member. In fact, there are some instrumental moments that rank amongst the finest in the entire career of the band. There is an enthusiasm to the music and the album is very vibrant. To what do you attribute the band's drive and ability to keep producing new music of such high quality?

Thank you so much for the kind words! But I really don't know the answer to that question! Ha, it certainly isn't the money. :-) I guess one reason is that having those qualities in our music is really important to us. If music doesn't feel fun or create some type of emotional response, then we aren't very interested in it I guess. We're all well into our adulthood, but we still have the mentality of teenage boys so maybe that's where some of the enthusiasm comes from.

Is there any touring planned for Noise Floor and do you see Nick D'Virgilio being a part of it?

We will most likely do some sort of tour later this year, it's currently being worked on. Probably the usual stops in Europe and UK. We really wanted Nick to be on the tour with us, but he is just too busy with all the other cool things that he's doing in his life so we found another drummer that can sing and I think everybody will love him. We aren't supposed to say who it is until the tour is announced, but he's a guy that a lot of people will recognize, and we're happy to have him on board! He's also going to do Cruise To The Edge with us in February 2019.

A bit of fun question to close out the interview. What are your top 3-5 Desert Island Discs?

You know, I have never really been able to list things like this. Something that is my favorite today might be something that I hated last year, and what I love today, I might never want to hear again by this time next month, so I can't really commit to a list. And to make it worse, currently I'm not really listening to anything at all. I go in and out of periods where I just like things to be quiet.

Dave, thank you for taking the time to answer my questions and for all of the great music you and the band have provided to fans over the years!

Thank you! I really appreciate all the kind words and support DPRP has given us over the years! 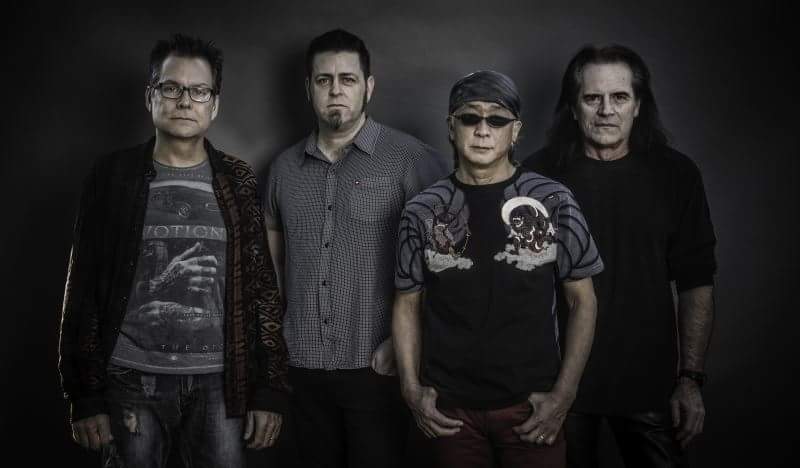 Throughout their storied career, Spock's Beard has experienced some significant line-up changes. The most recent being the exit of Jimmy Keegan, which opened the door for original drummer Nick D'Virgilio to return. There is no promise that his current placement is permanent, but his drum sound brings a welcome familiarity to this, the band's thirteenth album.

As recognizable as D'Virglio's talents are, Noise Floor actually finds their music heading into a slightly different, more commercial direction. This change isn't overt though and their signature sound can still be found in abundance. Album opener, To Breathe Another Day, is driven by the same urgent chord changes that have graced many of their classic tunes. However, there is also also a more accessible prog feel to some tracks that occasionally reminded me of bands like Kansas and even Styx.

This more immediate nature creates somewhat of an AOR feel at times. That's not a bad thing, per say and I appreciate that the band strives to keep changing things up. Ultimately, Noise Floor is pretty much what you would expect from a modern Spock's Beard album. Tracks like What Becomes Of Me, Somebody's Home and One So Wise are great examples of their trademark melodic prog.

That isn't to say that there aren't a few musical curves to be found. The Ryo Okumoto, keyboard-driven instrumental, Box Of Spiders is every bit as musically chaotic as the title would suggest. Also, So This Is Life is another change of pace that impresses with its Beatlesque sound and effective orchestration.

As is the norm for this band, the performances on this album are excellent. Though each member has a chance to shine, I was especially impressed with the work of Dave Meros. Truly one of the top bass players in the genre, he adds a groove to these songs that elevates them to a higher level.

The bonus, Cutting Room Floor EP also offers up some nice moments, including the 10CC-like Bulletproof and the wonderful instrumental Armageddon Nervous.

In the end, Noise Floor is another entertaining addition to the band's discography. It is musically complex while also consistently providing the accessible quality that fans of the band expect. That is the Spock's Beard recipe and few bands do a better job of cooking up this particular type of musical stew.