In 2010 I saw Alan Reed join Twelfth Night on stage, apparently his first performance after the split with Pallas. It was great to see him up there again. Alan's been building his solo career slowly and is back in full force now, with several albums and a live band. Before we start the Duo Review, I asked Alan a few questions.

A live album! Are you happy with the results?

We never actually planned to do a live album. We recorded a couple of the gigs on the last UK tour, and we started mixing them to give us an idea of how the live stuff was sounding - mainly to help with rehearsals. We liked what we heard and idly speculated whether it might be worth turning at least some of it into an album. Fortunately, Tudor, our keys player works doing live TV sound for a day job. He’s actually an award-winning TV sound mixer, and mixes the live sound for Later with Jools Holland, which is one of the biggest live music shows on British TV. He had some time free, so he had a go, and we were really pleased with the results.

This is the first album with a full band name. Does this mean it's a fixed line-up from now on?

The Daughters Of Expediency have existed as my live band for some time now - with various line-ups. But I think we now have the right team, so it seemed right to formalise that by releasing something with the name on. The studio albums will probably still be under my name, but I think you might find at least some of the band crop up on the recordings.

You're on a short tour right now. How are things?

It’s been a bit of an experience to be honest. The tour's coincided with the worst winter weather in the UK for some years, which has made travelling a bit of a challenge. We had to cancel the Glasgow gig, because the city was effectively shut down with no buses or trains running. If we’d managed to get there, it’s unlikely many people would have been able to come and see us. So we took the reluctant decision to cancel for now. I’ll aim to reschedule that one soon.

Our support band, Weend’ô are currently stuck at Southampton airport unable to get back to France. We’ve had to think on our feet to avoid the worst of the weather. Driving has been really difficult.

That said, the gigs we have played have been great fun. We enjoy playing together and it’s worth a bit of discomfort. We loved having Weend’ô along. I hope we get to play together again in future - and that this experience hasn’t put them off the UK.

From your first solo gigs to how things are now - how do you experience the difference?

It’s taken a while to relax into performing with a band again. At first it’s quite hard letting other people interpret your material. But over time we’ve all really grown in confidence and familiarity with each other. I’m certain now that this line up can deliver what I want it to. And that we can have fun doing that. We all get on really well as people as well as musicians, which is really important. The best bands are like gangs. And that’s what this one feels like.

A few Pallas songs, naturally, but one that was written before you joined. Crown Of Thorns is special to you?

Crown Of Thorns was one of the first Pallas songs I heard - long before I joined the band. I’ve always loved it, and loved performing it. And I think I was in the band long enough to make a reasonable claim for playing it. Someone should.

What can people expect after this?

I’ve already written the bulk of album 3, which has the working title of Grey Sky Thinking. I’d like to start recording it properly later in the year, with the aim of getting it out early in 2019. But life has a tendency to get in the way, so we’ll see.

Thanks, Alan. Good luck with the new album and hope to see you on tour again soon! 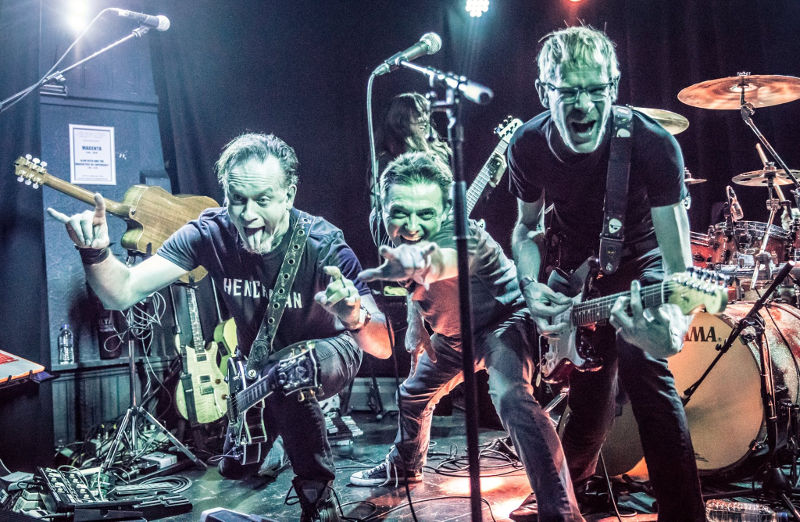 Alan Reed And The Daughters Of Expediency. Photo by Howard Rankin, used by kind permission.

Alan Reed And The Daughters Of Expediency - Live: From The Razor's Edge

Track List:
Begin Again (6:08), For The Greater Glory (5:40), My Sunlit Room (4:19), Razor (3:59), Sanctuary (8:31), Kingdom Of The Blind (5:25), Never Too Late (5:01), The Other Side Of Morning (8:11), Crown Of Thorns (8:58)
Mark Hughes's Review
I suppose it is some form of rough justice that following his unceremonious dumping from Pallas, Alan Reed has had somewhat of a higher musical profile than the band he fronted for 26 years and, in my opinion at least, has certainly produced better music on his two solo albums than the two his ex-band have released since the parting of the ways.

With three EPs in addition to the solo albums, a live album taken from the 2017 dates in support of Honey On The Razor's Edge is the latest offering. And it is the first with Reed fronting the delightfully named The Daughters Of Expediency featuring Tudor Davies (keyboards), Mark Spencer (guitar, vocals), Daren Callow (guitar, vocals), Jennifer Clark (bass) and Henry Rogers (drums).

Given that the two solo albums have a playing time of around 85 minutes, the tracks chosen for the live album certainly have a ring of familiarity to them considering that two of them, Sanctuary and Begin Again, featured on both the 2011 acoustic EP Dancing With Ghosts and the 2013 Live In Liverpool EP with the latter release also containing For The Greater Glory. Of course, these new live renditions are with the full band, but it might have been an idea to showcase some of his other material.

Likewise, one has to question 40% of the running time being culled from the Pallas catalogue, particularly Crown Of Thorns a track that was written and released before Reed even joined that band. Not that these are not good songs, Sanctuary could well be the best thing Pallas ever recorded, just that they run the risk of over-exposure and I would rather have a live album of Alan Reed Plays Alan Reed than Alan Reed Plays Pallas.

The band go a decent job on replicating all of the material on stage, particularly as several of the solo songs have a gentler, more acoustic basis which is nicely arranged for a full band. However, it does all sound somewhat sterile and is rather lacking a passionate and energetic live feel. The vocals are very up-front and prominent with the band pushed rather further back, although it has to be said the mixing is very good with all the instruments clear, even the acoustic guitar can be heard, which is an impressive achievement with two electrics providing muscular riffs. Some of the keyboard sounds are also a bit twee and, at times, grating, although Rogers and Clark make a great rhythm section.

On the whole though, this is a decent enough album with a fair selection of tracks performed in a confident and assured manner. My quibbles are relatively minor and the album is a good memento of the beginnings of Alan Reed stepping back into playing with a band and away from solo acoustic performances. Reed's voice has not lost any of its power or emotion and his Daughters are certainly a talented bunch. They undoubtedly come over better in the flesh than on this recording which is certainly one reason why you should get out and take in a live performance by them when they are next in your area.
Jerry van Kooten's Review
It's been a while since I reviewed a live album. I love attending gigs and to feel the atmosphere. I even collect live recordings from a lot of bands, but rarely play official live albums. They're often like a polished version of the raw, live energy.

This one was bound to be a little different, though. It is the first time that I have heard Alan with a full band in many years. I saw him guesting at a Twelfth Night gig in 2010, which I heard was his first on-stage appearance after Pallas. I saw him a few years ago, opening for Galahad, with Mark Spencer, a few years later. And now it's great to see him back with a full band. What a trip that must have been for him. So although the studio material was recorded with several musicians, hearing those songs live is something else. So on this rare occasion, I was looking forward to reviewing a live album.

First of all, for a live album this has been mixed superbly. You can hear all the instruments, even the piano and acoustic guitar during the heavier parts. The vocals are a bit up-front, though not in a distracting way.

I am really glad the Pallas songs have been re-arranged in places. It was more surprising than I expected. Never Too Late is quite different. There is more contrast between the softer beginning and full-band second part. For The Greater Glory is a different kind of heavy than the original. Although Sanctuary is less heavy overall, the keyboard lines make it creepier than the original, fitting the lyrics even better, and especially during the instrumental part you hear that this is just a refreshingly different band playing. Crown Of Thorns starts close to the original but the slower bits are a little bluesier, and the heavy bits are heavier, giving it a bigger contrast. And the thrashing after the "let me go" line made me fall in love with this track all over again!

When you have heard Alan Reed sing with the same band for many years, you somehow get used to the combination of his voice and the sound of the band. The sound of the band is just different, simply because it's a different band. Not in the least because there are two guitar players (Daren Callow and Mark Spencer), but also the way they play is different. The soloing is more blues-based and has managed to raise the hairs on my arms several times.

The drums (Henry Rogers) and bass (Jennifer Clark) form a good team and I like the way they fill a lot of spaces here and sound very gentle there. Tudor Davies (also the man behind the mix) is very surprising in his playing. Some of the solos really swept me off my feet.

The songs from Alan's solo releases also sound a bit different here and there, but these songs are much younger of course. They do fit in the same show, because of the energy and enthusiasm with which the songs are played. And I have to say that I love the new material more than that of his former band, but that's a matter of taste of course.

The band was bound to be so much different than his previous band, and this works very well to my taste. As a band they work great together, they sound great together. Guitar solos have a bluesy foundation, keyboards are more crazy, which is much to my liking. I am not sure whether it is the breath of fresh air after hearing songs you know so well for so many years, or that my taste has shifted, (or maybe both), but this album hits a lot of goosebump buttons for me.
Conclusions:
Mark Hughes: 6 out of 10
Jerry van Kooten: 8 out of 10
© Dutch Progressive Rock Page, 1995 - 2020