"To boldly go where no (wo)man has ever gone before!"

That well-known phrase from the world of science fiction could just as easily be dedicated to the progressive sub-genre known as the Rock in Opposition (RIO) movement. For the past four decades the term has been used to describe a random collection of artists with two things in common: a sound that is impossible to pigeon-hole into any other category, and recordings that can rarely be described as "commercial".

In this special edition, the DPRP's Martin Burns offers a brief background to the RIO story, followed by reviews of two recent albums that happily fall within such a remit.

If that has piqued your interest, then we have also compiled an easy-reference list of Ten RIO Albums You May Have Missed. There is a video and a review for each album.

A Brief Introduction to Rock in Opposition (RIO)

It is not often that a musical genre can be pinned down to having started at a particular moment in time. It can be argued that rock’n’roll kicked off when Elvis Presley went into Sun Studios in Memphis to make his first recordings (August 1953). Or that Beatle-mania became a world-wide phenomenon after their appearance on the Ed Sullivan Show in the USA (August 1965). You only have to look at the debate over the origins of progressive rock to see that these things usually have fuzzy edges.

However, with the movement known as Rock In Opposition, the phrase first appeared on a poster advertising a gig in London. The gig was held on Sunday 12th of March 1978 at the New London Theatre in Drury Lane. A multi-national roster of five bands appeared at the mini-festival: Henry Cow from England, Italy’s Stormy Six, Sweden’s Samla Mamas Mamma, Belgium’s Univers Zero and France’s Etron Fou Lelouban. 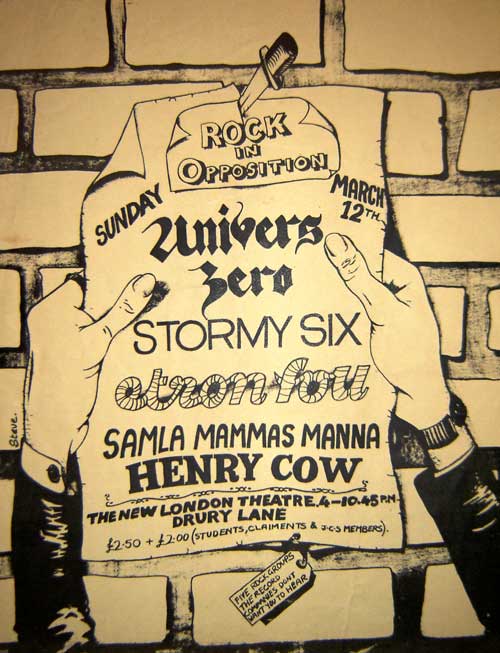 Rock in Opposition began as a loose collective of like-minded groups. But to what were these groups opposed? Well the tag-line on the poster gives an answer: "Five rock groups that the record companies don't want you to hear." Initially, the RIO movement was a prime example of what later-struggling musicians would call ‘sticking it to the Man’. In a pre-internet, pre-streaming age this was a way that bands, deprived of funds due to lack of record company interest, could generate some press interest. And in this, the mini-festival was a success.

RIO’s aim was to promote its members. It retained exclusivity by only welcoming members that demonstrated ‘musical excellence’, as judged by the five original groups' members, even though by then Henry Cow had split up (having been dropped by Virgin Records for the crime of being unprofitable). New members also had to work actively "outside of the music industry" and have a "social commitment to rock". Three new members were selected on this basis, and they were Art Bears (consisting of former members of Henry Cow), Art Zoyd from France, and Aksak Maboul from Belgium.

An independent record label, Recommend Records, was set up as a label for RIO artists towards the end of 1978. Three more mini-festivals were organised and took place in Italy, Sweden and Belgium, but by the turn of the decade RIO as an organisation had faded away.

An interesting thing then happened. RIO evolved into a catch-all genre for those awkward-to-pigeon-hole bands that were never anywhere near a commercial proposition. Bands that were a niche amalgam of avant-garde, free-jazz, free-improvisation, rock, prog rock and avant-garde classical music. As time went on, bands were classified into this genre who resembled any of the diverse sounds of the original RIO collective bands. Though the original groups were themselves musically very different to one another.

Many bands have been perceived under this genre banner, and it continues to be a signal that the music will be challenging, often non-commercial, and diverse in its musical structures and attitudes. Further festivals celebrating RIO as a genre were held intermittently from 2007 onwards featuring bands such as Magma, Faust, Gong, Guapo, Miriodor, Cheer-Accident and so on. So as a genre, RIO is alive and well and still kicking at the avant-margins of the rock world.

Here are two reviews of recent RIO releases from Miriodor and Art Zyod, followed by a selection of 10 other releases associated with the RIO genre that have been previously reviewed on DPRP.net. Happy exploring!

Art Zoyd formed in 1969 and released their first music in 1976. In that period they had moved from a progressive-leaning rock act into something you would now describe as art-rock or post-rock. They soon dropped the idea of having a drummer or a vocalist, as they were deemed to be too commercially-orientated. Art Zoyd transformed themselves into an electric, not to say eclectic, chamber ensemble, producing music that embraces avant-garde classical music (taking cues from Stravinsky, Schoenberg, Berg and so on), as well as free jazz. They are not afraid of dissonance, strange harmonies or unusual rhythmic patterns and radically combined tapes, electronics and acoustic instruments into their never exhausted sound pallet. That they were adopted into the second wave of the RIO movement shows how diverse this movement was. In fact, on the evidence here, the R part should be dropped entirely when mentioning Art Zoyd and RIO!

So to the music on At A Glance: Art Zoyd's leader, Gérard Hourbette, selected the nine tracks on it. What becomes obvious early on is that Art Zoyd has a singular musical vision, and comparisons to anyone else's music are futile. They really sound like no one else; just the way that Magma, sound like no-one but Magma.

Both of the opening tracks (L'ane de Buridan and Tone Reverse) are challenging chamber works of avant-garde modern classical music. They mix industrial noise, organ, strings, chanted vocals and a choir, and that's just in the first three and a half minutes. Atonal horns and pizzicato strings make the second piece even more difficult a listen. But both of these are very short extracts from longer live soundtracks to multi-media presentations, and they may make more sense when listened to in-context. But on their own they leave me baffled.

Things get better with the longer tracks on this sampler. The 13 minute Cryogenèse Reve Artificiel is insistent and challenging with its ticking clock, metronomic percussion, battering ram piano, and trumpet blasts that could awaken the dead. Whilst the 22-minute A Drum A Drum takes you on a modernist classical journey through shouting voices and squalls of brass, before settling into a minimalist, system music style rhythm and melody. It is hard to believe that just five people are making this much sound.

Art Zoyd also manages to squeeze in a piano concerto amid the noise and martial pounding of Les Borogoves (in less than three minutes!)

Then comes the best piece on this sampler. Noces Accidentelles is a stand-alone piece, performed live with the Orchestre National De Mexico. Opening and closing with samples of train sounds, it gradually builds through the introduction of gongs and tubular bells, to strings and full orchestra. It reaches a climax half way through that is breath taking. This is modern classical music at its best and stands shoulder-high with the likes of Ligeti. It is a shame that there is only the work by this line-up in the full box set.

There is also a work from 1975 that shows Art Zoyd straining against the conventional rock modes of the day. The tuneful, almost pop melody of Le Réveil, is twisted and deformed by scraping violin and a bouncing bass line; the contrast with the opening two works is startling.

Closing this collection is a spooky and haunting track from the live accompaniment to the 1921 Danish silent horror film Häxan (Witchcraft Through the Ages). Art Zoyd have provided a lot of soundtracks and incidental music in an evolving career. This track, Marche, is terrific and makes me want to investigate the rest of the soundtrack. Which is the whole point of this sort of sampler, I suppose.

As a taster for the full box set of 256 tracks (not including the DVDs), the nine tracks on ART Zoyd's 44 1/2 at a Glance: Selections from the Art Zoyd Box Set represent 3.5% of the music available. So any judgements made will be based solely on this shorter version. I feel that the mark given represents my heartfelt response to the nine tracks here. It does not really reflect on the potential riches that might be found amongst the rest of the work on Art Zoyd's full box set.

Miriodor once described themselves as "rock-oriented post-modern chamber music, with definite humorous overtones." But Signal 9 has a harder edge to it than that description would lead you to believe. Miriodor make quite the melodic racket at times. There is subtle interplay between the band members that make the album's improvisations seem organic, as they mix jazz, stop-start rhythms, counterpointed melodies and a short attention span. Even the longer songs on Signal 9 are made from short, sometimes almost discreet sections. So an eight- or nine-minute work will have five or six parts to it.

If you are new to the RIO/avant-prog genre, then the opening track Venin throws you right into the deep-end. Its mix of syncopated rhythms and melodies, wonky instrumentation and a visit to a crazy fairground, make it a challenging opening.

It would be better, for the new listener, to start with the second piece, Peinturé Dans Le Coin where the hyperactivity feels more controlled. The instrumentation dances across the spakers, making your eyes sweep from side to side, like being a spectator at an aural tennis match. There is a madrigal-like feel to the way the melody develops on this, and a Gentle Giant vibe to the tuned percussion used.

Miriodor really show what they are about with the longer-form Portrait-robot, where quirky instrumental sounds echo a Frank Zappa-like humour. Across the multiple sections, Miriodor alternatively get quite a groove going; then they throw in a stabbing synth solo, and Bernard Falaise's guitar comes to the fore in a quite unexpectedly lovely way. There is a mad, childlike coda where the fairground melody re-appears, as it does on occasion throughout the album.

Signal 9 continues in this vein, managing surprises at all most every turn. Chapelle Lunaire is like stressed-out Snarky Puppy suffering from Attention Deficit Disorder. It has a nice circularity to its structure. Whilst Passage Secret consists of at least six parts, moving from electric piano and guitar washes, through darkly syncopated passages, into the light of its conclusion. Bass player Nicolas Lessard underpins it all together, as he does throughout this wildly eclectic collection.

The only criticism I have of Signal 9 is that the short, almost in-between, tracks seem to be abandoned sketches that didn't really fit into some other longer pieces. They retain Miriodor's melodicism, mixing in glitchy electronica here and mutated rockabilly there (Déboires À Munich). One short track I really like is Cryogénie, which sounds like an outtake from the pioneering electronic soundtrack to the 1956 film Forbidden Planet. But the rest of the short tracks are skip button fodder on repeat plays. This would be a stronger album without these sketchy interludes.

Miriodor's Signal 9 is a strong RIO/avant-prog album that alternates power and delicacy in intricate ways, that takes the ear a while to settle into. This is not a love-at-first-listen kind of album. It repays repeated and careful listening. It is a beautifully crafted album that manages to be both intense and playful.
Conclusion:
Martin Burns: 7.5 out of 10
Also check our easy-reference list of Ten RIO Albums You May Have Missed!
© Dutch Progressive Rock Page, 1995 - 2021