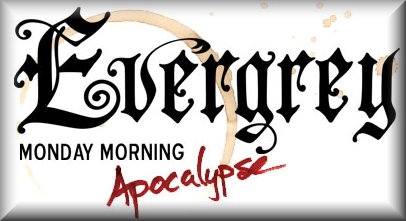 With their 6th studio album Evergrey proves to be more direct and more effective than ever before. The question however is do the fans and the critics appreciate this “new” musical approach of one of the leading Swedish metal bands of this time. Well, in 2004 Evergrey totally blew me of my feet with their best record so far called The Inner Circle. It was one of the best albums of that year and it still is the best Evergrey CD ever. In my review of this album, The Inner Circle, I wrote that it would become very, very difficult to top that album and I am sad to say that Evergrey indeed did NOT top it with their latest release Monday Morning Apocalypse. Do not get me wrong, it is a good album, but I expected so much more and there are no brilliant songs like A Touch Of Blessing, Ambassador, In The Wake Of The Weary or When The Walls Go Down on this album; as the songs on this new CD are shorter than ever before. Some of the tracks do still have those catchy and infectious hooks, like for instance, the title track, Lost or At Loss For Words.

The musical highlights are Still In The Water (bombastic, emotional and the only song over the 5-minute mark), Obedience (fantastic prog metal), Lost (Nevermore-like with a very catchy chorus) and the title track, filled with staccato riffs and stunning vocals. Unspeakable and The Dark I Walk You Through both have a Metallica-like intro, before they evolve into melodic prog metal songs with lots of vocals and only short guitar solos. The Curtain Fall is a true disappointment as it is a rather tiresome head banging song with nothing special whatsoever. The real misses however are Till Dagmar (a piano intermezzo) and Closure, an uninspired piano ballad.

So, unfortunately Monday Morning Apocalypse is NOT The Inner Circle 2, but it still is a good and decent prog metal album, but no more than that as I sadly miss a few magical captivating songs on this new album. Hopefully next time again, guys???

Sooner or later every prog metal band, it seems, is going to make an album that splits the fan base. It's happened with Dream Theater on Train Of Thought, to Pain Of Salvation with Be, and now its certainly happened with Evergrey’s new one, Monday Morning Apocalypse. To be honest its not hard to see why as soon as the title track kicks into life – with its down-tuned barrage of riffs, Tom Englund’s heavily processed vocals and the melodic chorus which has a definite similarity to fellow countrymen In Flames latest material, you can almost hear many progressive metal fans – who in general, despite the name of the genre, can be a rather conservative bunch – crying ‘sell out’.

Yet, as the album progresses, it soon becomes clear that whilst the band might have made steps to contemporise their sound (which I think is a fairly sensible move on their part) this is still recognisably Evergrey. OK, the songs are shorter and more straightforward, the sound distinctly modern and the trademark symphonic keyboards are more in the background, but songs like Unspeakable, Obedience and the stately In Remembrance still contain plenty of the dark, gothic and (yes) progressive elements that Evergrey are known for.

Where the album perhaps falls down a little is the fact that, whilst many of the songs are (in contrast to those on the last album The Inner Circle) fairly immediate, they don’t as a rule have as much of a lasting impact as I’d have expected, with the likes of Lost and I Should in particular coming across as little more than filler. In addition, the album does feel rather samey, with only the short instrumental To Dagmar, a delicate piece with piano to the forefront, breaking through the mid-paced heavy riffage. There is a nicely controlled, rather sparse ballad, Closure, right at the end of the album (and listed as a bonus track) – it might have been an idea to insert this somewhere in the middle of the set, in order to provide another contrast.

On the upside however, there are (as always seems the case with Evergrey) a couple of tracks really do stand out and will no doubt add weight to their already impressive back catalogue – At Loss For Words builds slowly before erupting with a huge central riff and strongly memorable chorus, whilst Still In The Water is somewhat reminiscent of the band’s material circa In Search Of Truth; it has a convincingly eerie feel, is notably more symphonic than the majority of the songs here (even incorporating female vocals at one point) and has some strong harmonies on the chorus.

Overall then, this isn’t a great album, but it is a good one, and far from the disaster some fans seem to be making it out to be. One thing’s for sure; as I witnessed at a recent London show, Evergrey remain an extremely powerful live act, and Monday Morning Apocalypse has surely yielded extra firepower for the band’s future shows.

I'll place my cards on the table from the start, and state that these bunch of Swedes are probably among my top half dozen metal bands of all time. In a career spanning more than a decade, their five studio albums have been utterly flawless in creating a band, with a truly unique style and approach. A band that has yet to deliver a disappointing song, let alone a dud album.

Blessed with one of metal's best voices in Tom S Englund, they have defied categorisation. Each album has progressed gently from its predecessor, yet always retaining that trademark Evergrey sound of dark riffing, intricate solos and flamboyant touches of keys. ProgMetal? Goth Metal? Dark Metal? Who cares what it's called - its just bloody good metal to these ears.

Last year saw the superb live DVD, that was seen by the band as drawing a line under the first part of the their career. So with a two-year rest since their last spell in a studio, how have the five musicians set out the Evergrey stall, for the next phase in their bid for world domination.

Having lived with Monday Morning Apocalypse for a fortnight, the first thing to report is that the stall is smaller and the sales pitch is far more direct. However it's a stall where if you spend a little time searching below the surface, you can find all sorts of things that don't immediately jump out at you.

It's certainly no In Search of Truth. Much more like a Recreation Day-lite. For existing fans who cherish the more extended, atmospheric and progressive elements of the Evergrey sound, then this may not be exactly what you wished for. But for fans who appreciate the band's ability to grow and develop, and more importantly, for those who've always found the band to be to much of a mouthful, then this is an album full of riches.

The first thing to say, is that with 12 songs clocking in at a little over 45 minutes, Evergrey isn't carrying any excess baggage with this release. The opening trio of Unspeakable, Lost and the rousing title track all possess monster riffs laid down by Englund and fellow guitarist Henrik Danhage. Yet the surprisingly light choruses have more in common with Nickelback and Def Leppard than The Masterplan. Not that Evergery have 'wimped out' or 'gone commercial'. The songs are still heavy as hell, but the hooks have an real immediacy and there is just no padding at all.

In contrast, the further you go into the album, the darker it gets. In Remembrance is a heavier version of I'm Sorry, while Till Dagmar is a short piano piece; The Dark I Walk Through is one step up from suicidal and Closure sees Tom wrap up the album with his traditional piano ballad.

Three of the album's highlights come in the second half of the album and are among the best songs the band has ever written. At Loss For Words has an atmospheric opening, followed by a monstrous riff and an anthemic, punchy chorus. Still In The Water is the most epic sounding track, with a deliberately slower riff, whilst I Should is a personal favourite, with its addictive little hook and clever variety of pace and intensity.

Overall, Monday Morning Apocalypse shows a band with the confidence to broaden its sound and appeal. There's not a weak track to be heard and it has four or five songs which should be at the top of the playlists for all fans of dark, gutsy, melodic metal. Another triumph.