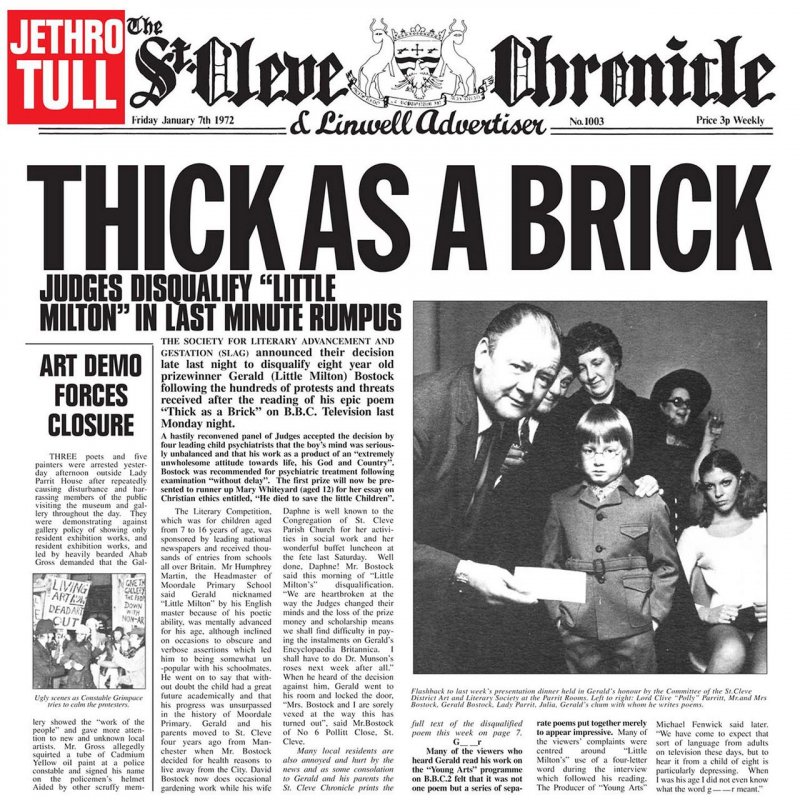 Thick As A Brick

It seems quite clear that many progressive rock enthusiasts primarily view Jethro Tull as a second-tier representative of the style. I believe the usual discussion runs along this line:

Jethro Tull were a decent, late 60s, blues-based rock band with jazz overtones and an eccentric frontman (one Ian Anderson); after the departure of founding member Mick Abrahams, Tull became a bit more eclectic, offering a hard rock 'n' roll tinged with acoustic touches and world-music flourishes; Aqualung made the band an arena smash and an FM radio staple; it then enjoyed back-to-back number one releases in the United States – Thick As A Brick and A Passion Play – which were composed in the contemporary idiom of progressive rock; and subsequently, Tull returned to a more streamlined musicality, perhaps highlighted by the folk-rock musings of Songs From The Wood.

That is the story, indeed, in the proverbial nutshell, except that it fails to capture the grandness of Tull's foray into progressive rock. And not only is Thick As A Brick exemplary of Jethro Tull's immersion into the genre – of the band's control over the compositional complexity and performance acumen typical for progressive rock – but it is exemplary for the entire era. 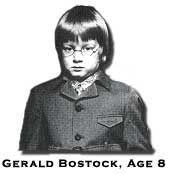 Jethro Tull first and foremost did not take the progressive rock rubric too seriously or too much to heart. In fact, Thick As A Brick is in some ways a satire of the entire development of the genre. Ian Anderson has stated that his original intent, in response to the incorrect assertion that Aqualung had been a concept album, was to create the “mother of all concept albums”, but as “a bit of a spoof”. So, while the fans and sundry listeners do find Thick As A Brick a conceptual piece, it is clearly a laugh up the sleeve as well. The liner notes—in the form of daily newspaper articles, no less—indicate that the lyrics are authored by one “Gerald (Little Milton) Bostock”, an eight-year-old poetic prodigy, who has won first-place in a writing contest. Alas, though, there is a scandal; Gerald's work is protested; the judge's revoke Gerald's prize; and the Thick As A Brick lyrics are deemed “obscure and verbose assertions”. A conceptual non-concept: that is the joke of Thick As A Brick. Tull blurs the distinction between art and comedy, between impressive aesthetic display and mockery. Especially in contrast with A Passion Play, which is foreboding and marginally disjointed, Thick As A Brick is light in its refusal to be too well-lauded. And whereas something like Van der Graaf Generator's Pawn Hearts smacks of self-consciousness and existential absorption, Thick As A Brick seems quite playful, but all the while ambitious and clever.

Tull's line-up in 1972 had altered significantly since the previous year's success of Aqualung and the musicianship of the players certainly bears the stamp of progressive rock prowess. Thick As A Brick is possibly John Evan's finest hour, as the various keyboard solos and accompaniments fill the album: most notably, it is rare for any individual tone to repeat, except as reprise, and Evan's contribution is remarkably fresh, more so because he does not play with an Emersonian grandiosity but strives to accent and complement. Barriemore Barlow – easily the unsung drum hero of progressive rock – lends subtle intricacies here and there but does not hesitate to pound out a menacing throb when requisite. Martin Barre as always is a study in understatement, but also he is the epitome of finesse and guitar tact. Ian Anderson of course commands the show and holds the loose ends together. The vocals range from weary resignation:

Your sperm's in the gutter, your love's in the sink

to exasperated imitation of the self-appointed aristocracy of modern humanity:

I've come down from the upper-class, to mend your rotten ways
My father was a man of power, whom everyone obeyed

But there is also always a smirking transcendence throughout the tunes, as if to witness such sad mortality is of course to rise above it. Well, not always, but observation often makes attractive verse, and the idea that Gerald Bostock would understand, at eight, the follies of Homo sapiens is ludicrous, and wraps Ian's intensity in levity. The tricky acoustic guitar arpeggios, flute trills, and accurate ensemble playing merely point out a musician – and an entire band – at the pinnacle of its career.

The long form of the album – the unbroken concatenation of song and instrumental segue – is a derivation from classical music, and it would perhaps be ridiculous and ill-fitting if it weren't constructed so tightly. By and large, the album never drags or flattens; each new theme is vigorous and compelling, and draws attention forward into the next segment. Most enjoyable perhaps is the return to the Thick As A Brick guitar strum, the repeating motif, which is instantly recognizable but, slightly altered, lends to the music a new emotional emphasis, a different perspective on the overarching structure. The miracle of Thick As A Brick is somewhat its length but more importantly its continuity and consistency.

My idiosyncratic fondness for Thick As A Brick stems mostly from my love of a good, solid, sing-along melody. I sense a strain of holier-than-thou contempt in progressive rock as a genre, an attitude of elitism and snobbery, and that attitude often involves a dismissal of radio play and popular success, of simple harmonic congruence and compositional regularity. I am certainly one to enjoy the avant-garde and even doses of outright discordance (God bless you, Mr. Fripp!), but I regard as the best of the breed those more melodic prog bands that still retained an adventurous musical disposition and a desire for innovation. In short, I want my prog solos and extended flights into the tonal ether, but I also want a nice bit of tune. Thick As A Brick satisfies that craving. There is no lack of hummable snippets and I find that those short segments of pure pop songcraft blend well with the fanciful musings and skilled dexterity of prog instrumental music. I'm selfish: I need the experimentation and I need the melodic comfort, and Tull supplies me with both in Thick As A Brick.

The early 70s was the banner era for progressive (and what is now termed “classic”) rock and there were many gems in 1972, but I can always return to Thick As A Brick – like I might return to Dickens' Oliver Twist, or Kubrick's 2001 – and find an excellence that really serves to crown the genre. I like it more so because it is Jethro Tull, the (pseudo-prog, say the detractors) prog band, that taught the other boys how it should be accomplished. 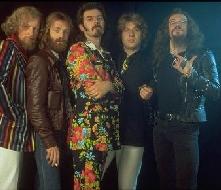 Cup Of Wonder - Jan Voorbij's Fascinating & Informative Tull Site (no longer active; formerly at http://www.cupofwonder.com; now copied or continued at the site below)

Interesting "Thick As A Brick" Photos (no longer active; formerly at http://www.abj.btinternet.co.uk/brick1.htm)