A Different Point Of You

Alias Eye are a German outfit who generated quite a bit of interest with their debut CD Field Of Names. Expectations were doubtless high therefore for the follow-up, and they band have certainly delivered the goods on A Different Point Of You.

The band’s style is somewhat difficult to pinpoint, particularly when looking for major comparisons with other acts. The music on this CD can probably be described as stately, occasionally jazz-inflected prog/pomp rock, with a pronounced, if generally understated, heavier side. At various points there are echoes of Saga, Kansas, Dream Theater, Spock’s Beard and Rush (mid 80’s era), plus a whole host of more mainstream acts, in particular Queen and Supertramp, yet I don’t feel there’s any one artist that you could draw significant comparisons with over the full length of the album, which is certainly a strength. It’s also to Alias Eye’s credit that they pull off a range of different musical styles with some flair, and that the focus is firmly on songs – not to say that there aren’t a number of fine instrumental sections, but the band always appear to have a tight reign on these, and don’t let their obvious virtuosity get out of hand.

A Different Point Of You gets off to a dream start with A Clown’s Tale on which Alias Eye manage to nail that holy grail for all bands: the killer opening track. From the atmospheric opening section, where from amidst the sounds of a Middle Eastern bazaar, emerges a short, evocative saxophone solo before the song morphs into a powerful, stately rocker, which retains an ‘arabian’ feel throughout. Vocalist Philip Griffiths stamps his authority on things immediately; in my opinion, he has one of the strongest voices in progressive rock today, and impresses throughout with his powerful delivery and seemingly effortless range. This is a wonderful song, well written, constructed and delivered with a very real sense of passion, and packing quite a punch to boot.

Whilst A Clown’s Tale sets the bar very high, the band do manage to clear it again a couple of times: Your Other Way is an irresistible track which mixes a breezy, ELO / Supertramp-style pop-rock feel with a heavier edge, in addition to incorporating Spock’s Beard-ish vocal harmonies on the chorus. Alias Eye also manage the trick of introducing an accordion to proceedings, and making this seem like a perfectly natural thing to do! The Great Open, meanwhile, is a dark, sweeping epic in the very best prog tradition – pompous and melodramatic, but in a compelling, majestic way.

Elsewhere, the quality is consistently maintained, bar one misfire – the rather ill-judged funk-rock of Fake The Right – and the pleasant if somewhat underwhelming ballad Drifting. The likes of the slick, up-tempo pop-rock of The Usual Routine and On The Fringe, with its unusual time signatures, classical undercurrents and Griffith’s somewhat arch, over-dramatic vocal delivery, are strong songs which both make an immediate impression and bear repeated listens.

Overall, a highly impressive album, full of strong, varied songs and flawless musicianship - I feel I hardly need to mention that the production is excellent as well. There’s still room for improvement of course, but as it stands this is highly recommended, particularly to those who appreciate well-written and constructed songs as opposed to a barrage of instrumental excess and tricky time signatures.

Look in a dictionary and in terms of music you will see the word ‘rock’ defined as follows: "A style of rock’n’roll characterised by a harsh, amplified sound and loud distorted electric guitars." Therefore it would not be unreasonable to expect a band that describes its music as ‘art rock’ to at least have a modicum of oomph to their sound. At least that’s one of the key ingredients that I was expecting in the second album by this German ‘art rock’ band. Any other listener who possesses a similar expectation should be prepared to share my disappointment before pressing ‘play’.

I really enjoyed their debut release Field of Names. While towards the lighter side of my musical tastes, it had some lovely melodies and a good helping of crunch. In a similar way to A.C.T., the many musical diversions and blends added a great touch of individuality and held my attention throughout.

For A Different Point Of You the band has kept its core sound but basically wimped out. This ain’t progressive rock – it’s a Middle of the Road (MOR) album with a few fancy touches. The band shows what it could be capable of with the opening track. A Clown's Tale has the guitar to the fore, good strong melody lines, good lyrics and blends it with a Turkish Casbah mood and some cool, but forceful sax. So too in the seventh track, where On The Fringe ups the tempo and hits a good groove - this time, some forceful strings add a bit of variety.

Elsewhere, A Different Point Of You is basically a straight, easy-listening album. The second track Fake the Right is a straight R’n’B/funk tune, Your Other Way is an MOR ballad that diverts into a French movie soundtrack (think Emile) and The Usual Routine is a fairly straight jazz/funk exercise that reminds me of the sort of thing to be heard at an end-of the-pier show, common in English seaside towns in the ‘60s. And the album plods on in a similar vein. Drifting is a straight ballad with piano acoustics and strings, The Great Open is another ballad with an annoying keyboard humm in the background throughout, while Too Much Toulouse (ha ha!) is a straight, smoky, jazz/soul ballad. The Yuk factor reaches unbearable levels with Icarus Unworded – MOR doesn’t get more dull and it even fades out with the guitar solo at the end!!!

This has been a good year for DVS, with Chrome Shift and Silent Edge both being quality releases. But this is way too far from their normal market for me. Being blunt – if it wasn’t being released by a progressive label we wouldn’t even be giving it the time of day. Sure it’s all well played – Philip Griffiths’ vocals are particularly impressive - and if you don’t mind an occasional rest in the Middle of the Road then you may indeed have a different point of view. But it you like your progressive rock to at least sway gently, then steer well clear. Disappointing.

With their previous album, Field of Names, Alias Eye was voted second best newcomer in the DPRPoll 2001. Now they have returned with a new album, which once again is packed with musical styles.

The rule in Alias Eye seems to be that there are no rules. Any musical style can be mixed with any other style. This certainly refers to the 51 minutes of the album, which contains styles ranging from prog rock (A Clown's Tale) to funk (Fake the Right) and jazz (Too Much Toulouse, The Usual Routine) and even a touch of metal (The Great Open). It is also true for individual tracks. Take for instance Your Other Way which starts with Spanish guitar, thereby creating a Mediterranean mood, before suddenly shifting to a Parisian style with accordion in the middle and ending in a heavy rock atmosphere. Whenever a song contains a bridge or break the band normally move into a totally unexpected musical area, making their work all the more special.

The album starts with effects and the sound of one of the tracks on their debut album on the radio. This might well be the only bit on the CD which isn't all that original, since this trick was already used by Marillion, who included a snippet of Market Square Heroes in the intro of Forgotten Sons more than two decades ago. The rest of A Clown's Tale quickly makes you forget this when it moves into an Eastern melody, including a haunting clarinet-like Sax giving it a bit of a Sting-feel. One of the highlights on the album.

The musical diversity of the band is further proven by the second track, Fake the Right, which is a real funky affair with brass. Thereby this is quite a danceable song, something you rarely encounter in prog rock. The Usual Routine is also quite funky and includes a rather jazzy break with piano and trumpet.
On the Fringe starts with didgeridoo and also contains some fine cello and piano, while the weaker vocal melody in The Great Open is more than compensated for by the fantastic break and guitar solo in the same song. Finally, the album closer, Too Much Toulouse, takes you to a smokey jazz bar with it's shuffling drum brushes, piano and contrabass.

Because of these remarkable style shifts in most of the songs, some of the more 'mundane' tunes on the album don't really grab my attention. Although they might be fine songs in their own right, within the context of the varied album Icarus Unworded (with it's Steve Howe-like guitar) and Drifting are just too straightforward to make a lasting impression.

Although this new album might at times be a bit more poppy and less punchy than it's predecessor it is still a highly recommended CD. Alias Eye continues to amaze me with their diversity. The wealth of musical styles might however work against them since nowadays some prog rock fans find themselves most comfortable in a little niche of the genre and rather have an album in one style instead of absorbing new ideas and influences. 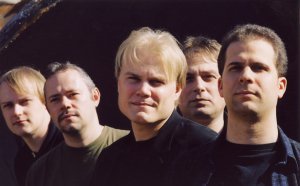