Now, here's something quite different. No CD reviews this time, but a lengthy review of something which is presented as a Progressive Music Encyclopedia on CD-Rom instead.
The CD-Rom comes as a self-produced CDR with white label with 'progressive' in big black letters. The thing is slipped into one of those plastic CD-wallets, wrapped in a 2 page leaflet. And all of this will cost you £18.95 . This CD better be good !

For those who don't know their way around PCs that well, it might be quite a challenge to get the program started. The CD does not have any instructions about how to start the application, so you'll have to explore the contents of the CD yourself. 'Fortunately', the CD contains 3344 files, none of them stored in a subdirectory. When scrolling through the list of files you'll eventually find an executable file written in MS FoxPro at the very bottom. Let's click on that one.

Okay. First thing you have to do is specify a path for 'temporary files', though it never becomes clear what these files should be. Then you'll suddenly find yourself with two open applications, a FoxPro window and the application itself. Strange enough you can't close the former window. Well, okay, that might be a detail, but it's much less convenient that you cannot maximize the window of the database; it will only result in a bigger grey background. This doesn't really help in making the database records any more visible. 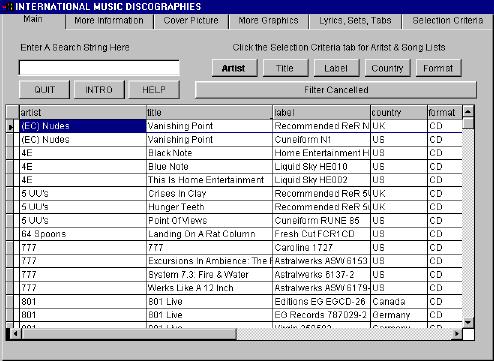 Okay, we're in. We're presented with an interface that is dominated by a table with the '20.000 listings' the CD claims to contain. Each listing consists of the fields artist, title, label, country and format. You can switch the positions of these columns and resize them (if you find out how to do it yourself; it's not explained anywhere). The big buttons of the right, which carry the same name as the columns, can be used to sort the columns. Typing in a search string, followed by clicking on one of these buttons helps you to jump to the first record that contains the string in the specified column.
Unfortunately, it's not possible to copy and paste records from the main screen to another application.

Clicking on 'intro' opens a window with some text that refers the reader to the Gibraltar web site for definitions of different sorts of prog (but fails to provide the URL). The author also sort of apologizes for not being 100% complete. Seemingly some bands have been ommitted from the CD because the data was incomplete. Strange enough that didn't keep them from including some other bands which are present on the CD-Rom (but more about that later). Prog Metal and Prog Jazz are not included on this CD at all.
An important part of the CD is grading and pricing of collectible records, however rather than explaning the grading system to the buyer of the CD, the author simply tells the user to go out and buy a Discovery or Record Finder magazine, in which these terms are explained. Duh !

Clicking on 'Help' opens a window with Help text. Since it's text only and no explanatory visuals are used it's not very user-friendly and doesn't really stimulate reading all of it. And there's lots of typos as well. Sloppy ! 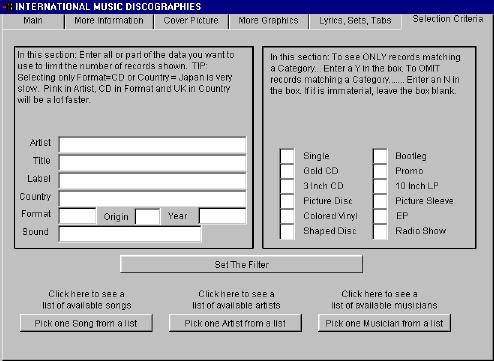 In the search screen you can specific one or more selection criteria, among which all of the fields from the main page, as well as additional ones and all specific formats. Three options that seem extremely cool are presented at the bottom; select an artist/band from a full list of artists (the result doesn't differ from typing in an artist selection criteria), and even better, selecting all releases that feature a specific song or musician. This might seem extremely handy, but in practice it falls flat and is extremely disappointing; since the details on songs and musicians are only available on a small portion of all releases, the results of these searches are very incomplete. Lots of releases on which the song or musician is features and which are in the database will not be selected, rendering these options worthless. Example: according to the database, John Jowitt only plays on the IQ records 'J'ai Pollette d'Arnu' and 'Ever'. 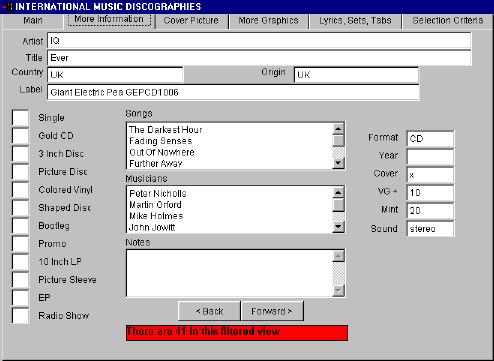 If you select a record in the main screen, you can get information about that release by clicking on the 'more information', 'cover picture', 'more graphics' or 'lyrics, sets, tabs' tab.
The 'more information' section offers details about the songs on the release, the musicians the format and the traders value. When you start playing around with the search options and this information screen, you start to notice how incomplete and incorrect the database is. For a large part (if not most) of the releases the songs and musicians fields are empty. And when song titles are actually shown, track timings are missing.
'Cover picture' shows the album cover for some releases. When available, the quality of these pictures is often very low. Pictures are 350 x 350 pixels, in 256 color bitmap form. This also results in all the 120K files on the CD-Rom and slows down the application dramatically. Why not use Jpeg format instead ?
Some releases have 'more graphics'; additional pictures of the artwork or labels.
Finally, some bands have lyrics, guitar tabs and concert set lists linked to them. These can be viewed in the concerned tab. Personally I haven't found any set lists or tabs after browsing around and the lyrics often proved to be sloppy in presentation and grammar; they were probably copied straight from some Internet page.

So far, I hadn't been really enthusiastic about the CD-Rom, but things got much worse when I actually started using and testing it. The application proved to be somewhat unstable, some errors occured, and when 'cancel' was choosen, the application shut down.
After viewing 'More information' on a specific release and switching back to the listing on the main screen, the cursor had jumped back all the way to the top of the list, so I needed to scroll down again.


The recency of the database is rather questionable. The last bitmips were made in July 2000, while the application dates from Feb 2001. Therefore there is no reason why some major releases from pre-2000 should not be included. The last Fish albums of '97 an '99 are missing, but at the same time the list includes a whole list of bootlegs. Spock's Beard seemingly haven't released any albums since 'Kindness of Strangers' and also 'The Ladder' by Yes is missing. for Arena, only 'Welcome to the Stage' is listed. Whatever happened to the 2 studio albums before that and all the CDs that followed ? These are just a couple of examples. Some bands are completely missing.
Using the year as selection criteria does not work (well); many resulting records in the listing turn out to be releases from different years.

And it get's worse. Besides being incomplete and not up-to-date, the CD actually contains quite a lot of incorrect information. Here's a couple of examples.
The keyboard player in IQ seems to be one 'Martin Oxford' on some of their releases.
'Alan Parsons' should be 'Alan Parsons Project' for the releases that still had Eric Woolfson in the band.
IQ's 'Nine in a Pond is Here' is mentioned as a GEP release with catalogie number GEPCD006, while it was never released on that label.
Dilemma's Imbrocatta is shown as a US release, while both the band and label are 100% Dutch !
'What God Wants' seemingly is a Pink Floyd release. Roger Waters would get a stroke if he would see this.
And the list goes on and on and on. The more I browsed through the CD-Rom, the more I found.

Besides all of this, the CD is not very useful for the average prog fan. It contains lots of records with obscure promos and bootlegs, while many regular releases are painfully abscent.

Common rules of a database seemingly do not apply to this encyclopedia. Standardization of data is awful. Browsing through the list of songs shows 21 (!) different listings for the same song (Another Brick in the Wall part 2), caused by slight variations in spelling. But there are also many doubles in the artists list caused by different spellings and typos.


I asked some of the DPRP team members what they would expect of a Prog Rock Encyclopedia CD-Rom of 19 Pounds Sterling. Most of their wishes (samples, clickable links, background information, biographies, etc) are not fulfilled by this product.

The whole thing feels like something an amateur started as a sort of hobby and somebody else discovered it and decided to make a quick buck with it. Whatever was the origin of this disc, I think it is a bloody rip-off and an insult to intelligent prog fans. A company that puts such a worthless product on the market and dares to ask 19 pounds for it should be ashamed of itself ! Stay away from this piece of crap and stick to the Gibraltar web site instead.