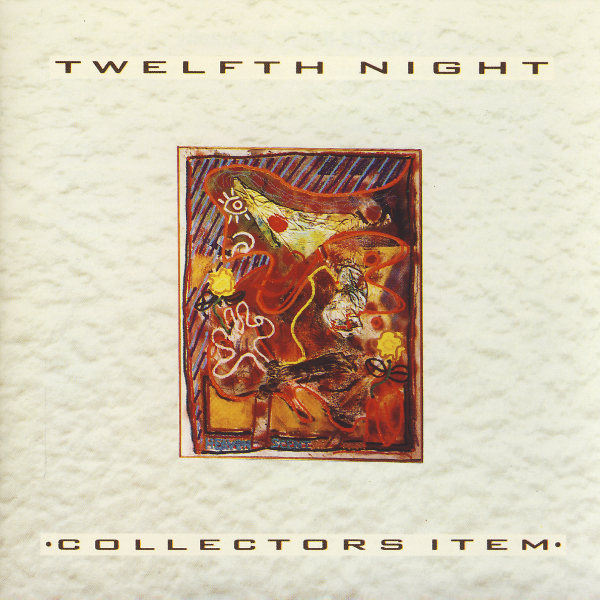 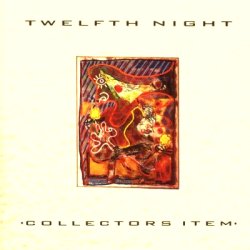 A compilation album in Counting Out Time? Yeah well, these guys just had to be here... (OK, some others should have been here too, but we just couldn't cover everything.) And although Twelfth Night have released some really wonderful stuff, I am glad I got the chance to write about Collectors Item. It is a compilation album, containing previously released tracks. But it contains tracks that are still not on CD elsewhere, and, best of all, it also contains two newly recorded tracks, one of which had never been recorded in the studio before... If there is one track that defines Twelfth Night, it's this one: The Collector.

The band began as an instrumental outfit in 1978, working mainly on Andy Revell's guitar play. His playing is fierce, powerful, and he was experimenting with sounds. There were a lot of ideas, which resulted in songs like Four And Three, Encore, and an early version of Sequences. The latter would be used to blend with newly written pieces, making the track longer and longer, as several recorded versions show. 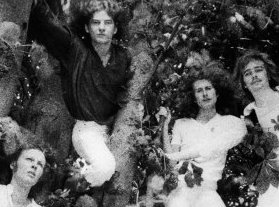 The influences came from several musical directions. In the early days, there was not keyboard player in the band. (The first couple of months it was just Brian Devoil on drums and Andy Revell on guitar, until Clive Mitten joined on bass.) In 1978, the majors in what was called progressive rock did something completely different then. It was not a good time for this kind of music, due to the punk revolution. The band didn't mind very much, and did what they wanted to do, which was out of the ordinary, or simply unique. The musical themes were not progressive rock per definition, although experimental. If quirky time figures are one definition of prog, TN never did obey too much to that. Especially when singer Geoff Mann joined, the music was becoming less experimental, but still very adventurous. There were stories to tell.

After some instrumental demo tapes, a girl singer called Electra McLeod joined the band for a few months. She was asked to leave when she started missing gigs. The demo tape (and 7" single) they recorded with her had to be followed by a fair representation of the band back in an instrumental line-up, which became the Live At The Target LP. I like to think keyboard player Rick Battersby added some orchestral ingredients to the music of Twelfth Night, he certainly made the sound fuller, even more powerful. However, Clive Mitten's contribution to the songwriting cannot be denied. After Geoff joined, Clive and Geoff wrote most of the primarilary version of songs, that were worked on and arranged by all of the band. The first proof of Geoff's joining was a demo tape called Smiling At Grief, re-issued on CD by MSI in 1996. There are some shorter songs on this tape as well, that still show the way the band was thinking. 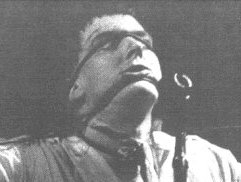 Geoff Mann was a very charismatic human being. He was a poet, a painter, and a performer. He had played with the band on a couple of previous occasions as a guest before he actually joined the band. Some fans were a bit disappointed when he joined, ending the instrumental line-up of the band. But with him joining, the band gained a lot of fans as well. He was loved by many. Especially at the beginning, his voice was rough. The band wasn't about to invite him to the band, and they used a recording of Sequences over which Geoff dubbed his vocals, as a reference tape for auditioning for a vocalist. After a lot of auditioning, they realized Geoff was the man for them. He wrote lyrics to some of the instrumental tracks, but not all.

With Geoff in the band, the aspect of theatrics in their show were raised to a new level. He did not portray the people he created in his lyrics, he lived them, from the child in The Collector to the lady in We Are Sane who lives in an Orwellian setting of suppressors and suppressed.

According to a lot of people, the band wrote their best material when Geoff was in the band. They were miles ahead of other bands in the field, most notably Marillion. Timing, however, was what made the difference. Twelfth Night spent most of 1982 recording their album Fact And Fiction without playing any concerts. In that time, Marillion were able to interest EMI in signing them, while Twelfth Night were buying back the rights to the studio recordings from Revolution Records to release their album independently.

It was almost two years after Geoff had joined the band when he realized that playing in a band was not giving him enough space. His interests and artistic feelings did not get enough room, since being in a band means you have to compromise. The band planned two farewell gigs at the Marquee for his leave, and decided to record them for a live album. Two sweaty nights of powerful progressive rock marked the end of an another era. They also provided one of the best live albums in the genre.

Andy Sears was present at Geoff's farewell gigs, and witnessed the band at the pinnacle of their artistic life. Well, it's not completely fair to Andy to say this, but things did change a bit after this. Andy was more into Queen than Genesis, and the compositions got tighter and stuffed with harmony vocals and more layers of music. To simply put it, the band was progressing. Andy's voice had a slightly wider range than Geoff's, and was a bit clearer, smoothier. 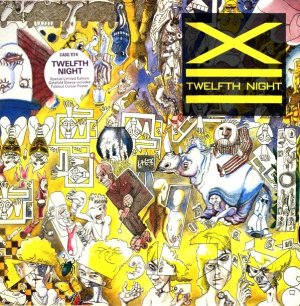 This also means that the vocals lost something of the rough edge and, in my humble opinion, personal touch. Lyrically, things didn't change much - the band had always had the idea to let the singer write the words, and Andy apparently was, like Geoff, not into fairy tales, dragons, and elves, nor writing agressive lyrics for the sake of writing agressive lyrics. They both wrote songs that dealt with human beings, their surroundings, their feelings, and the stupidity of wrongly aimed agression. With First New Day, Andy wrote his version of Love Song.

After Andy joined, the band recorded the mini LP Art And Illusion, which contains five shorter tracks, one of which, the title track, had lyrics written by Geoff. Very melodic, but showing the new musical direction already. The song Take A Look (as Andy Revell later explained, their last magnum opus) was finished by then, but the band wanted to hold it back for a full-length album, with a major company - something that could not take too long anymore!

And Virgin it was. No one understood why the album didn't have a real title, so although eponimously titled (and not XII as many people think), it became known as the Virgin Album. The music was even more structured, and I think more time has been spent in the studio than ever before. It's a matter of opinion or taste, of course, but there's quite a difference between the Twelfth Night with Geoff and with Andy. 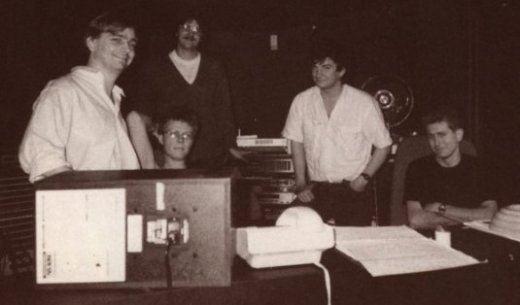 Well, after a long introduction, we've reached Collectors Item now. It was necessary to explain the different stages in the history of Twelfth Night, all that led to this ultimate compilation album. The band had split four years earlier, and the first CD re-issues were released: Live At The Target and Fact And Fiction. Bless the one who got the idea to release a compilation CD, do a re-recording of their classic Love Song, and give their never-recorded magnum opus of magnum opii the right studio treatment.

Collectors Item was released in three different formats: CD, 2LP and MC, all with different track listings, to cram them up as full as possible. The lack of Für Helene on the CD (78 minutes!) means the only drawback: the instrumental line-up is not covered. Sequences, probably their best-known track, their trademark, simply had to be there, of course. It's the definite version with Geoff on vocals, taken from Live And Let Live. Another popular track that is included is Take A Look. Andy Sears is further present on Art And Illusion and First New Day, as well as Blondon Fair, previously released as the B-side to the Take A Look single only. All tracks with Andy singing experience their first CD-release!

Well, I could easily write a full megabyte of text on The Collector. It's the biggest, the grandest, the greatest, the most powerful, and most emotional track they have ever done. As the band described the opening of the Geoff Mann farewell gigs (the song The Ceiling Speaks), this song has it all and more: "a little agressive and not too complex". And that's exactly what this band stood for.
The highlight of this marvellous song, for me, is the instrumental section between the twelfth and fourteenth minute. The wall of sound, guitar and keyboards interacting, growing and growing, powered by the pumping bass and bashing drums... It's one of the few pieces of music that can bring tears from beauty to my eyes...

For more information, take a look at The Collector, my Twelfth Night web site. Yes, mine. Is it fair for a big fan to write a review on one of his favourite band's releases, I hear you ask... Well, it's not really a review, is it? I was just given, and I grabbed the opportunity to explain to you why this Twelfth Night were a unique band, had a unique sound, and have recorded some essential music. There will never be another band like Twelfth Nigth. This record, the ultimate overview to their career, is simply essential to everyman's record collection.

Sources:
The pictures, from top to bottom, are the front cover of Collectors Item, the photographs that follow are taken from the sleeves of Live At The Target (instrumental line-up), the First 7" Album back cover (Electra McLeod), an articles titled Night Of The Living Dead by Philip Bell, published in Sounds, August 6, 1983 (two pictures of Geoff), and the inner sleeve of Art And Illusion (Andy), then follows the front cover of the eponymous album also known as the Virgin Album, and the last two photographs were taken from the inner sleeves of the Collectors Item 2LP.