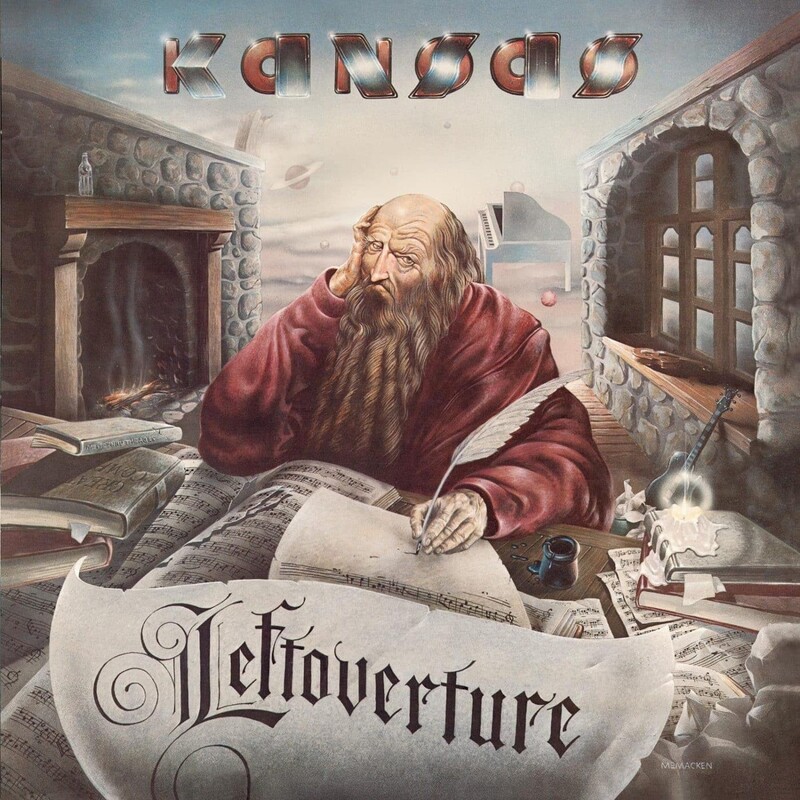 Oooph ... bending my knees I position myself in front of my collection of old vinyl records. Uncomfortably squatted I realise that it's been quite a long time since I listened to something from this collection. Dust confirms this thought, even though the record player is within reach and can still be considered a fullworthy part of my audio set.
In contrast with most of my friends, I have never had the urge to exchange all my old black classics for silver digital discs. This was partially because of financial considerations, but even more because I didn't want to erase all those precious memories with a meaningless surrogate; regardless of the crackles and pops. It's a legacy of time that is irrevocable. I don't want to change it.

I'm looking for Kansas' Leftoverture to satisfy the wish of my fellow DPRP Team members to write part 1976 of the "Counting Out Time" column. Gotcha!
Between Steve Howe's Beginnings and Two For The Show I find the slightly paled cover with the Dave McMacken illustration of a pondering composer, slightly bend over his "Magnum Opus", where "Music thru the ages" pays her respect.
I have never really been engrossed in the often rich history of musicians. The meaning and expressiveness of lyrics have been and still are of no real importance to me, although a specific passage might occassionally imprint itself in my memory. It's the composition itself and the way it is presented that carries me away. Music like a maiden that is soon to be a bride with all her beauty, intensiveness, influence and wealth.

It's the second half of the seventies and I've almost got my teenage years behind me, surrounded by a close group of 'real' music lovers. Dust in the Wind of the formation Kansas is quickly climbing the charts all over the world. Nice tune between all those blooming, fiercely hated disco and soul releases. Kansas is unknown ground for me. I am more familiar with the British rock scene like Yes, Led Zeppelin, Deep Purple, Uriah Heep and a bit of Genesis, who had their best period behind them, although we didn't know it back then. According to insiders Kansas was defintely worth checking out and they gave me the advise to buy Leftoverture and not the most recent Point of Know Return with the aforementioned hit single. Well ... it is American ... Nevertheless I follow the advise, plucked up courage and bought Leftoverture.

"The promised land is waiting
like a maiden that is soon to be a bride
The moment is a masterpiece,
the weight of indecision's in the air"

The black 12" released by Epic (a subsidiary of CBS) has not been packaged in the double sleeve which was so characteristic for the rock genre but in a wonderfully illustrated single sleeve with gothic type setting. This promises something good! The creme coloured inner sleeve has all of the lyrics and pictures of 6 self-assured musicians, clearly of American origin, from left to right: Steve Walsh, keys & vocals; Robby Steinhardt, violin & vocals; Dave Hope, bass; Rich Williams, guitar; Kerry Livgren, guitar & keys; Phil Ehart, drums; not what you would call the prototype line-up of a prog rock band, but the most legendary line-up ever of the group Kansas.

The word "Kansas" comes from the name "Kansa", one of several Native American tribes from the Kansas region. In the language of the Kansa Indians, "Kansa" translates roughly to "People of the South Wind" - (PotSW).

Leftoverture is their fourth album since their nameless debut album of 1973. The significant liner notes of the first one were quite unsure about the chances of success of this new and unknown progressive style: Our music has many faces and many moods like the land we live in. It is a fusion of energy and serenity, a melting pot of ideas. From the very beginning, we considered ourselves and our music different, and we hope we always remain so. Our lives are in this music. WE ARE KANSAS! KANSAS IS A BAND!
The Album

Compared to their European colleagues, Kansas used a more song-like approach. The musical presentation of their heavy sympho forms a strong collective. Whereas Yes and Genesis often offered the individual members the chance to shine and show their skills, Kansas keep their bombastic sound continuous and tend to fit the solos within the frame of the composition.
Leftoverture opens with the acapella vocals of Carry On Wayward Son. This often-covered song immediately sets the right mood for the whole album: dynamic symphonic rock with an unsurpassed energy for our beloved genre. The interaction between the 6 highly educated musicians is phenomenal without ever degenerating into unnecessary, extremely extended individual performances, instead focussing on functional contributions. Of the layered, soloing guitars of Williams and Livgren one line proves to follow the rhythm, thus acting as a rhythm guitar.
The album, which has 8 songs in total, proceeds with the slightly modest, melodic The Wall, which is characterized by introvert clarinet playing. This melodramatic song, sometimes tending toward a ballad is one of my favourites because of its emotional expression, fed by simultaneous play by Hammond and violin and a howling guitar.

Kansas heads on in an incredible tempo. Flowing, crossing guitar parts are laid down again in What's On My Mind, interlarded with massive, choir-like backing/harmony vocals, which runs through the work of Kansas like a leading thread.
The powerful and emotional lead vocals of frontman Walsh are alternated by Steinhardt in Miracles Out of Nowhere and later in Cheyenne Anthem. He is blessed with a beautiful voice as well. The duet is surrounded by Steinhardt's violin and supported by acoustics. Gradually they work towards a climax with several soloing instruments following different directions, later on drowned out by a wonderful wining G-string of the electric guitar.

Phew ... That's the first twenty minutes. The production easily passes all critical tests and is crystal clear. I turn over the record and gently place the needle at the beginning of the B side.
A floating intro of keys opens Opus Insert, a more straightforward rock song, if ever there could be such a thing with Kansas. The acoustic guitars form a nice basis.
In the thundering Questions Of My Childhood the piano interacts with the rhythm again and there's another role for the violin to shine. The electrical guitars are driven back somewhat on the B side and the keyboards play a more prominent role in the Kansas-show.
The acoustic opening of Cheyenne Anthem is interrupted by the vocals of Steinhardt, after which - I can't get enough of it - Walsh' wonderful voice takes over again, this time supported by a children's choir. All centered around a catchy intermezzo with one theme for various instruments once again. The compositions, mainly written by Livgren, but some in collaboration with Walsh and the others, easily cut their way towards the listener.
I realise that I haven't said much about rhythm section Hope/Ehart. The beautiful crushing bass in Magnum Opus drives off all doubts immediately. Ehart's drums have indeed been pushed back a bit in the mix. He isn't really obviously present with drumfills, but just try to follow his rhythm and play along on the table top with two fingers (kick & snare) .... You'll be surprised by his subtle feeling for rhythm and unnoted time changes.

- While working on Leftoverture, there are a bunch of leftover parts that don't fit with any of the other songs going on the album (which helps to make sense of the album title). Livgren and Walsh fuse these miscellaneous pieces together and produce this magnificent montage of music and sound. The names are simply made-up names and ideas applied to each piece. Originally, the album is to be called Magnum Opus, and the song is to be called Leftoverture. At the last minute, they decide to swap the two... - (PotSW)

"The notes go dancin' off in the air
And don't you believe it's true,
the music is all for you
It's really all we've got to share
Cause Rockin' and Rollin',
it's only howlin' at the Moon"

The album reached a respectable 5th position in the US charts. Even the single Carry On Wayward Son which was drawn from the album became a small hit, reaching the 11th position.

Unfortunately Kansas has only played live in The Netherlands once, even though they visited the main continent of Europe and especially Germany several times. Just before the original, most legendary line-up split up in 1981, the band played live at the Sjiwa Summer Rockfestival on the horse racing course in Baarlo, together with a.o. Foreigner and the clown Jango Edwards. It's been said that Walsh wants to play a more straightforward kind of rock and wasn't willing to perform the God related creations of Livgren in front of a large audience. With a bit of luck (and a modern browser) you'll find my ticket for the outdoor festival somewhere between these lines.

I still find it remarkable that there is so little interest in Kansas among the younger generation of prog fans. While dinosaures like Yes, Genesis and Pink Floyd are still 'worshipped' there is little familiarity with 'my' Americans. In the "Counting Out Time" column we will also look at Kansas just once, while the mentioned British bands will get attention several times. Not fair as far as I'm concerned. All of the studio releases by Kansas are worth while, with no exceptions. If Kansas is missing in a prog rock collection, it's incomplete. Kansas is unique! The advice I got in the seventies still stands.
Leftoverture still remains on the dust cover of my record player...

"I sang this song a hundred, maybe a thousand years ago
No one ever listens, I just play and then I go
Off into the sunset like the western heroes do
Tell me what you're gonna do"

Sources:
• People Of The South Wind