When in the early seventies progressive rock really started to rise on the wings of its most successful advocates, among which were Genesis, Yes, Pink Floyd, and Emerson Lake & Palmer, it was only natural for other, new bands to try to make a name for themselves in the wake of their big time contemporaries. One of those bands, formed in 1972 in Surrey in England, had released two albums by 1974, which hadn't attracted a lot of attention. Not giving up, they sat down to create their third album and it was this album that propelled them into international fame. The band was Camel and the album was The Snow Goose. 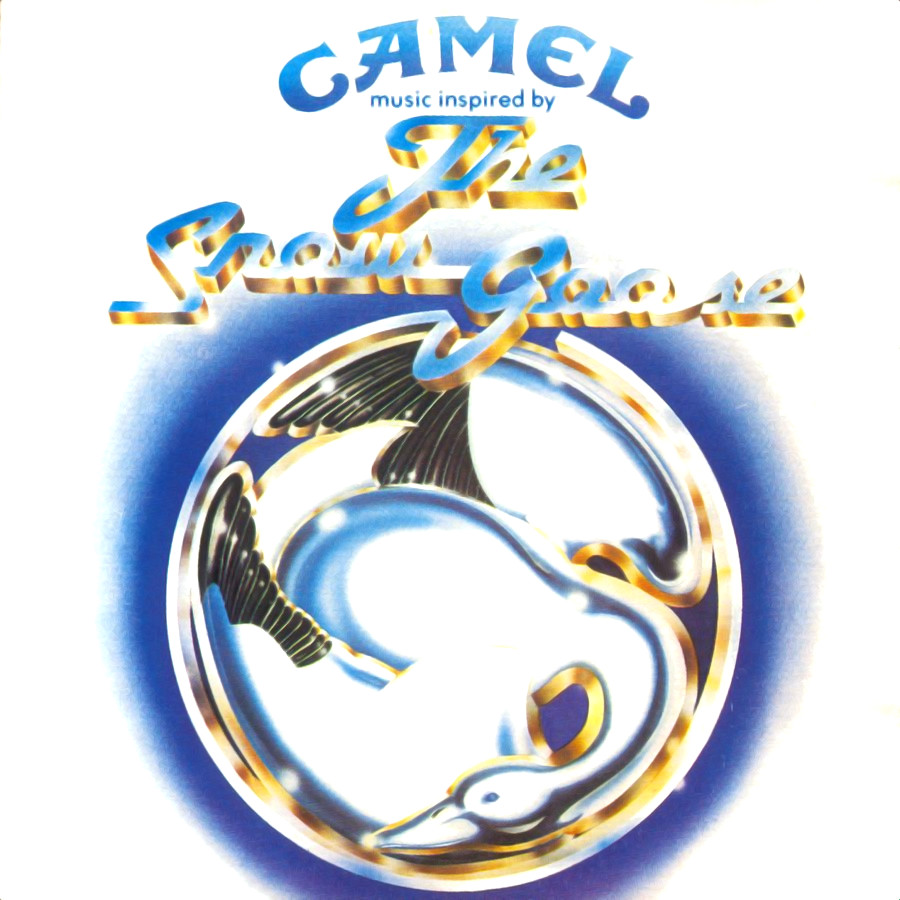 When Andrew Latimer, Peter Bardens, Andy Ward, and Doug Ferguson retired to Devon to start working on the new album, they had not yet decided on what concept to use. Indeed, up until the last moment, Peter Bardens wanted to adapt Hesse's Steppenwolf, while Ferguson and Ward favoured The Snow Goose, a book written by American author Paul Gallico. Latimer, who didn't have a clear favourite, finally managed to convince Bardens that Gallico's work was best suited to write music for.

Camel's previous two albums showed that they leaned heavily towards the instrumental side of music and a lot less towards the lyrical side. Some of their songs were fully instrumental, and some longer songs had long instrumental sections and sparse lyrics. With The Snow Goose they would take this instrumental approach a step further: all sixteen songs on the album were completely instrumental, which made it an incredible challenge to get the message of the book that inspired the music across.

Although Ward and Ferguson were credited on a few songs from the previous albums, Bardens and Latimer formed the creative nucleus of the group, and they were completely responsible for all the music on The Snow Goose. From the very beginning of Camel, they had had musical ideas that were quite different from each other and they frequently had musical differences. But when they could get their ideas pointing in the same direction, they could write fantastic music, as evidenced on The Snow Goose and its follow-up Rain Dances. Unfortunately, the musical rift between the two just became wider and wider with time, until Bardens saw no other option than to leave the group after the recording of Breathless in 1978.

As said before, the music on the album The Snow Goose tells the story of the book by that title. As such, it can be viewed as a soundtrack, and there are passages on the album that really have the feel of a soundtrack. But it is much more than that, because a soundtrack accompanies spoken text (a radio play) or an audio-visual presentation, while the album tries to do both in one package, that is, be soundtrack and storyline at the same time.

Before going into a track by track discussion of the album, I will first give you a brief outline of the story. One day Rhayader, a lonely person who lives in the marshes, finds a wounded snow goose, and takes care of her. A little girl, Fritha, is also concerned about the goose, and she and Rhayader become friends. By the season's end the goose heals, and it is set free. Following this, Rhayader is alone again, as Fritha doesn't come to visit him anymore. Rhayader helps saving people at the battle of Dunkirk, and during the battle the goose comes back to help. Rhayader is killed in the battle, and the Goose is then named La Princesse Perdue.

The opening track, The Great Marsh, slowly fades in. Among the sounds of waking birds and frogs a lamenting voice can be heard. Barden's organ and Latimer's guitar beautifully describe the desolation and loneliness of the marsh. After one minute into the song Bardens' keyboards introduce the rest of the band as Ward's drums kick in with Ferguson's subdued bass in support. This second part of the song is much more uplifting: morning has arrived and with it a new day!

The next song, Rhayader, is one of the best known from the album, and probably one of the best known songs from Camel's entire catalogue. Camel still play it to this day, and the song is often covered by other bands, most recently by Polish band Quidam. It introduces Rhayader, who lives in an old lighthouse on the Essex marshes and cares for the wild birds. The first few seconds sound just like the March Of Death (Sorry! Don't know the official English name for this famous classical piece!), but this sense of doom is quickly replaced with joy when Latimer's flute starts a happy tune. A keyboard solo follows, before the flute part is repeated.

Rhayader Goes To Town opens very threatening. Rhayader finds a cold welcome in town because the townspeople fear his odd appearance. At the same time they are curious because he has a noble bearing. This track is much more guitar oriented than the previous one, which had almost no guitar! Completely in style the track features a guitar solo by Latimer.

Sanctuary is a short guitar-only piece: acoustic guitar overlaid with gentle electric guitar. The snow goose is swept off-course by a sea storm and is just able to reach the Essex coast. Fritha finds her exhausted and wounded on the beach and gently cradles her, for she has heard that nearby lives a man who is a great healer of birds.

Fritha is also a very gentle song. It features acoustic guitar and sweet Moog sounds. When Fritha meets Rhayader she is also frightened of him, but her concern for the snow goose overcomes her fear.

Some great organ playing by Bardens carries the first part of The Snow Goose. In the second part of the song the organ plays a more supportive role and Latimer's evocative guitar has the leading role.

If Sanctuary was guitar-only, Friendship is entirely keyboards! It has a very filmic feel to it, something that could have been used for a comedy play. While the snow goose gradually gains strength, tended to by Rhayader and visited by Fritha, a strong bond of affection grows between the three of them.

The last track on the first side of the album, Migration, tells of the snow goose being set free after it has been completely healed from its injuries. This track features vocals by Latimer. One can clearly hear the snow goose's elation at being able to fly again. The music slowly fades out and is replaced by the same depressing classical piece that opens Rhayader and is also the start of the next track. 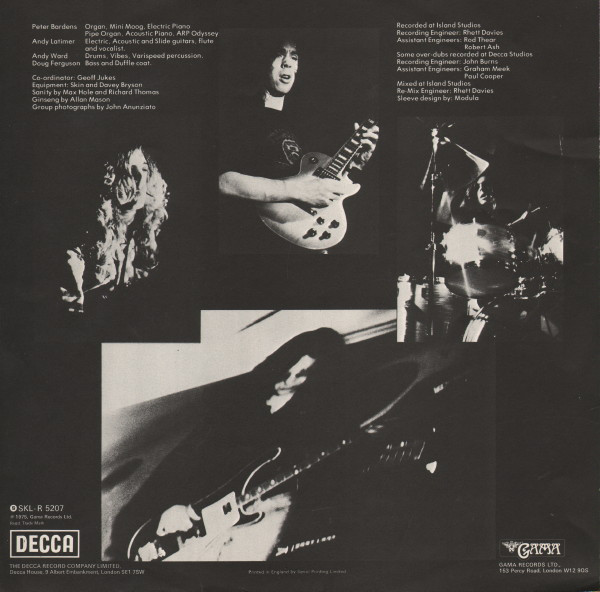 Rhayader Alone is a sad piece. With the departure of the Snow Goose, Fritha no longer visits the lighthouse and Rhayader is once more alone with the melancholy sounds of the marshes. Rhayader's despair is beautifully painted by Latimer's guitar.

But one day high above the horizon appears the familiar shape of the great white bird. Rhayader in his joy sends for Fritha. Flight Of The Snow Goose opens with a fast keyboard sequence fading in and high speed guitar on top of it. The rest of the song is a duel between guitar and keyboard.

In Preparation, Rhayader gets ready to sail, together with the small Armada of other boats to help in the desperate rescue operation at Dunkirk. This is again a very filmic piece, with a repeating guitar melody line in the background, a staccato rhythm and very atmospheric flute on top of it. The second part of the song is very ill foreboding.

The organ is once again the foundation of the music in Dunkirk. This song slowly builds up in volume and instrumentation with each repeat of the musical theme. Not altogether coincidentally an orchestra was used for the recording of this song and several brass instruments can be heard at various stages. The end of the song is quite explosive and even a bit chaotic, depicting the battle that Rhayader finds himself in the middle of.

Epitaph Breathes Doom. It starts with the same ill foreboding music that ended Preparation and has some very dark keyboard sounds. Rhayader ferries many stranded soldiers to safety until at last he is hit, and the snow goose is seen circling low over the spot where the little boat has gone down. A tolling church bell ends the song, as if lamenting the dead.

Fritha Alone is a nice piano version of Fritha. La Princesse Perdue is another orchestral piece. It opens with frantic violin playing and a blistering Moog solo. It is in essence the same as the opening of Flight Of The Snow Goose, with different instrumentation. Fritha realizing somehow that Rhayader will not return is still looking out to sea when she spies the snow goose. She is filled with a sweet sadness as she follows her princess home in as if to land only to fly away, out of sight, lost forever. The final part repeats the theme from The Snow Goose.

The album ends just like it started, with the melancholy sounds of The Great Marsh.

The Snow Goose proved to be Camel's breakthrough album. Although critics had difficulties with the fact that it was an all-instrumental album, it reached a respectable 22nd position in the UK charts. Paul Gallico threatened to sue Camel for the use of title The Snow Goose and subsequent releases of the album therefore had the title Music Inspired By The Snow Goose instead of just The Snow Goose as in the first edition. It seems Gallico, who was a non-smoker, wasn't too happy with the implications a band name like Camel's could have for his image! 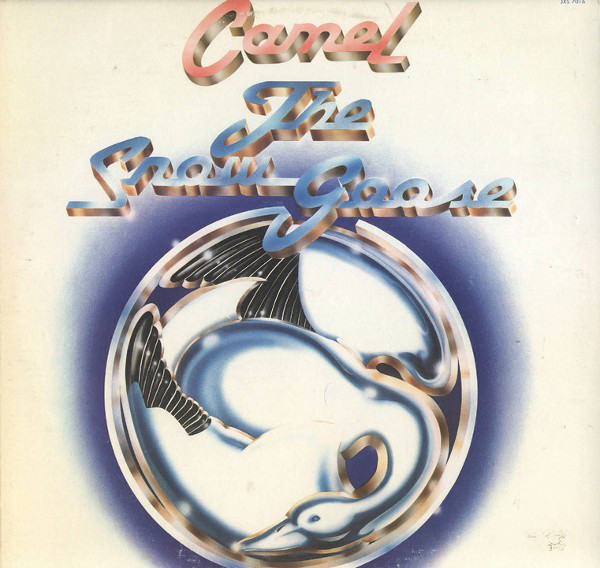 The Snow Goose defined Camel's style in two ways: musically and conceptually. Musically, in that on subsequent albums, Camel wrote shorter songs in the vein of the ones on The Snow Goose, with a very strong sense of melody, with solos that supported the melody instead of the other way round. Conceptually, in that the mostly instrumental concept album format would be used again several times in later years, in albums like Nude, Dust And Dreams, and Harbour Of Tears.

Although not as well-known and less commercially successful than some of their contemporaries, Camel over the years have become a standard for comparison. Many bands have blended something of Camel's unique style into their own, and some are very clearly influenced by them, like Dutch band Maryson. Camel, in the meantime, are still going strong, with a new album poised for a 2000 release. So, smoke 'em if you got 'em!