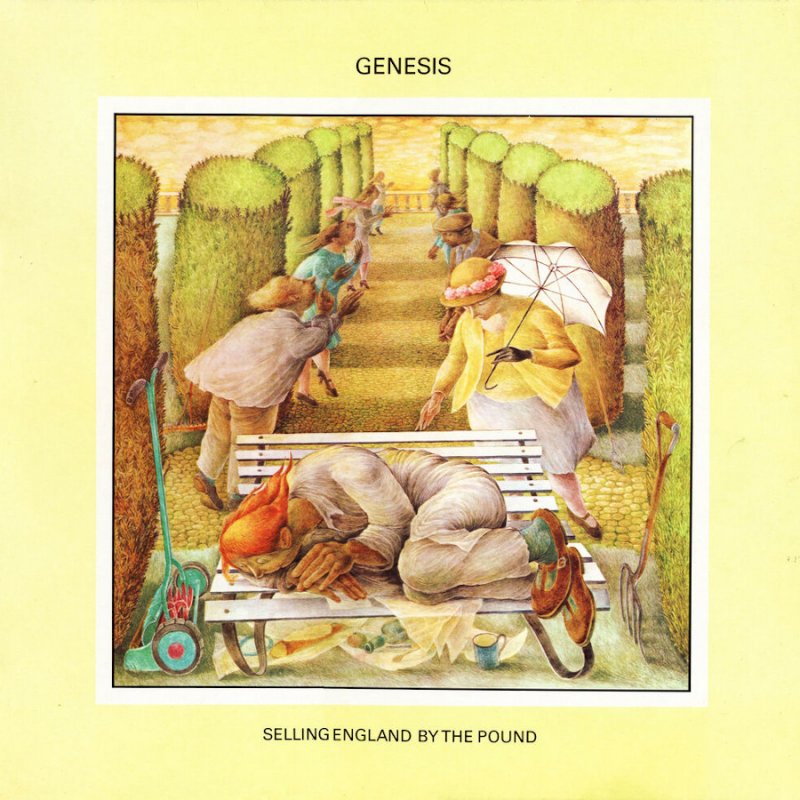 "'Can you tell me where my country lies', said the Unifaun to his true love's eyes" is the very first thing you hear on Genesis' fourth album. No music, just Peter Gabriel's husky voice. The music doesn't start until the third sentence, and by then you already know that this album is something very special.

A year after the critically acclaimed hit album Foxtrot Genesis is back, with the difficult task to surpass the album that had brought them their first real success and allowed them to step out of the shade of small university and club gigs, into the first bright rays of international success. Selling England By The Pound succeeded and brought the band international recognition with comparisons made by the press to Yes, ELP, The Rolling Stones, and The Doors.

Where Foxtrot had still sounded as if the band was yet searching for a certain direction (despite the fact that this album contained their all-time masterpiece Supper's Ready), on Selling... they presented themselves as one solid band. You could hear that the band had grown and matured during their five years of existence and how the music had evolved from the gained experience.

The opening track Dancing With The Moonlit Knight is an 8-minute composition with the usual incomprehensible lyrics of Peter Gabriel. It starts with vocals only, while the rest of the band slowly joins in. After this mellow start all hell breaks loose. After the third minute, the Mellotron, so blatantly introduced on the predecessor, is now degraded to a more supporting role. And although the instrument is present on almost every composition on the album, Tony Banks refrains from indulgent actions like the Watcher Of The Skies intro off the previous album.

I Know What I Like (In Your Wardrobe) is the band's first shot at the charts. Tony Banks' catchy melody line and Gabriel's funny lyrics make the song perfect for a single. The song reached a modest 19th position in the English charts and would probably have been a real hit, had the promotional video not been refused by Top of the Pops. The single did however boost the sales of Selling England.

The third track turned out to become another classic in Genesis' history. Firth Of Fifth (a word-spin on the delta of the Scottish Forth River) is entirely written by Tony Banks and probably the best he's ever done to date. The classical piano intro is of true high-class standard. Tony's lyrics are so full of metaphors that even the best linguist won't get further than concluding that the song's about a river. And Steve Hacket's partly improvised guitar solo has been often imitated yet never surpassed.

More Fool me, the next track, is written by Phil Collins and Mike Rutherford, with the result that Peter Gabriel let Phil do the vocals on the track, although Phil is clearly trying to copy Peter's vocal style. The song does however shows that Phil is more than just the drummer of the band, although probably nobody would have guessed at the time that Peter would leave the band two years later, leaving Phil at the singing spot. 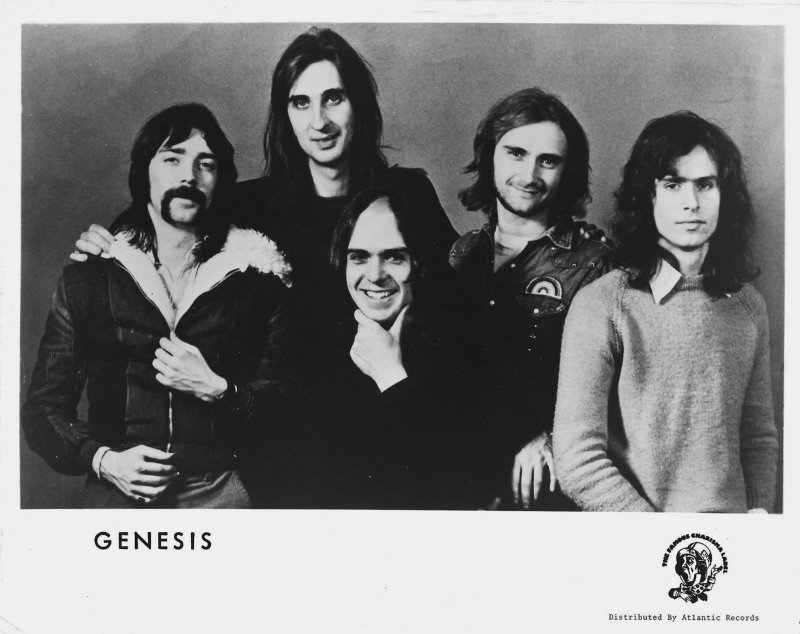 Genesis promo photo from around 1973

The first song on side two The Battle Of Epping Forest is the only "misser" on the album. As Tony later explained in an interview: "The music is great and Pete's vocal melody is great, however the two just don't seem to work together". Despite the serious subject of the lyrics, a gang fight, the song just doesn't sound serious at all.

After The Ordeal is the instrumental on the album. It is a very calm, serene piece based around a beautiful guitarsolo by Steve Hackett.

The next track is the third song on the album that has become an all-time favourite: Cinema Show. The song has a slow build with a couple of lyrics sung by Gabriel, before Tony takes over for a 6-minute keyboard solo, which is still considered one of his finest. (Although his solo of 1974's In The Cage is considered his best ever.) The song finishes with the theme of Dancing With The Moonlit Knight which completes the circle.

The last song on the album, Aisle Of Plenty, is also based on that same theme, which makes it a short reprise of the first song. The lyrics are a spin on the British supermarket industry. ("Ease you now, there's the safe way home. Thankful for her fine fair discounts, Tes co-operates"), and thus makes the circle, which started with Moonlit Knight (which also deals with the British consumption industry) complete.

Selling England By The Pound is one of the few so-called head-and-tail records. There is a clear start, a middle piece and a worthy ending which sort of reprises the start.

The album did indeed bring them the international success they deserved after Foxtrot and a world tour followed the album. The tour brought them to America, and Peter's stage extravaganza received even more raving reviews by the American press than it ever had got by the British press. It was something they had never seen this side of hard rock.

To me, this album stands as a solid rock in Prog history. Despite the fact that their previous album Foxtrot was maybe a more emotional album, with more feeling, and despite the fact that their follow-up album The Lamb Lies Down On Broadway is maybe a far more ambitious album, I still prefer to listen to Selling... as it is a lot easier to listen to. It is a real listening album, rather than an album which needs your full attention when you play it.