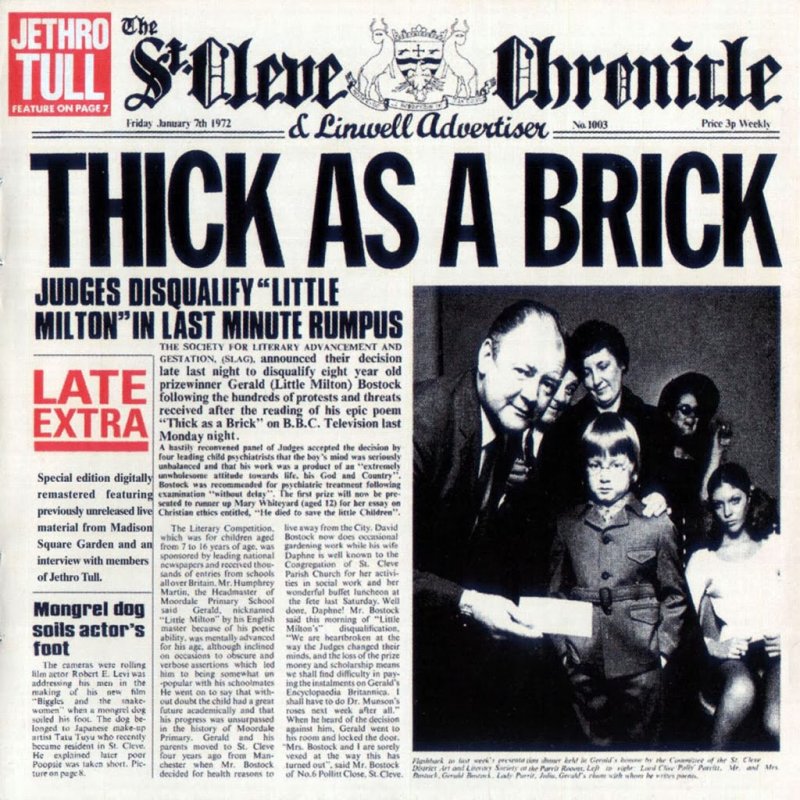 Based on the Thick As A Brick poem written (or so it was announced) by the (at that time) 8 year old Gerald Bostock this was the first progressive rock album I ever heard (through my dad). And it is probably my all time favourite album!

With Thick As A Brick, Jethro Tull in 1972 released their first true concept album. It consists of a whole of several varying pieces of music, linked to each other with practically no intervals. Some of the musical themes are repeated in a different setting. Different musical approaches are combined: folk, rock, jazz and classical elements.

The lyrics consist of one long poem, written by fictitious child prodigy Gerald Bostock, who shares his so-called views on society with us. When looking more closely at the lyrics, eleven different "acts" or parts can be distinguished, or, as Paul Tarvydas has put it, "a series of vignettes which swirl about a central theme". It is the music itself that connects these acts. (On A Passion Play it's just the other way around: on that album the story is the connecting factor, not the music).

The main themes are an elaboration and further exploration of the themes in Aqualung, as we will see below. The central theme of the album however is: a description of how society stifles individuality and pigeonholes people to suit its own needs.

In spite of the fact that the lyrics were heavily criticized by the press, the album made the band very popular in Europe and America and is even by "adversaries" considered as "a classic case".

In the latter months of 1967, four shaggy wannabe's congregated in the Southern UK town of Luton, Bedfordshire. The naive, untutored talents of Ian Anderson, Mick Abrahams, Glenn Cornick, and Clive Bunker tentatively coalesced to form the original Jethro Tull line-up. The group established themselves as the new resident band at London's famous Marquee club, albeit after a few false start identities ("Navy Blue", "Ian Henderson's Bag 'o Blues", "Jethro Toe", and the certainly suicidal "Candy Coloured Rain"). By March 1968, they had built a following as the new face of the blues-based British underground music scene. Lines stretched around the block on a Thursday night when they performed at the Marquee.

Following appearances in Hyde Park and at the Sunbury Jazz and Blues Festival in the summer of '68, the band gained wider recognition with the release of the album This Was which, whilst paying homage to the blues heritage which they all revered, hinted at the broader influences which were to become apparent in the post-Mick Abrahams times to follow.

After personal and musical differences, original guitarist Mick Abrahams left and the Tull boys embarked, with the then unproven replacement Martin Barre, on the recording of the landmark album Stand Up at the beginning of 1969.

Happily, the new record, Stand Up proved to be a great success, and lead the way to new opportunities in Europe and the USA. Ian Anderson's influences of classical, jazz, folk and ethnic music forms made the eclectic result an early landmark for the band, reaching number one in the UK album charts.

Tull, initially in the shadow of Led Zeppelin and others, then began the explosive ascent to the lofty heights of US stardom, culminating during the next three years in the cover stories of Time and Rolling Stone magazines, five nights at the Forum in Los Angeles and three nights at Madison Square Gardens, New York.

A few hit singles livened up the band's early career, amongst them, Living In The Past, written during the first US tour early in 1969, to keep warm the reputation back home in the UK. However, it was the albums as a whole which provided the strength for the developing Jethro Tull, containing as they did, not one, but usually several classic rock radio-friendly tracks to keep the band's profile high between concert tours and new releases.

Aqualung, and the so-called concept albums Thick As A Brick and A Passion Play confirmed the progressive rock tag which complemented other terms like "art-rock", "blues-rock", "folk-rock", and "hard-rock", depending on the critics' personal views of the often-complex musical thought trains of flautist and singer, Ian Anderson.

The first rock act since the Beatles to perform at Shea Stadium, New York, Tull laid claim to the live concert throne in North America. Howard Stern studiously learned the lyrics to Aqualung. Elton John set about regaining the title of most-people-played-to in major US cities. Bill Clinton wisely chose saxophone over the flute.

With two US number one albums and world-wide chart and sales success behind them, the band began to remove itself from the more commercially-driven side of recording and touring. Through the latter part of the 70s and into the 80s and 90s, their records and tours have proved throughout the world the enduring artistic credibility of a band continually able to reinvent itself.

The band's popularity extended into parts of the world where rock music had not hitherto been encouraged and the Tull legend from Buenos Aires to Budapest took root, eventually to be rewarded by the many tours in places where other acts feared, or simply did not care, to tread.

Drummer Doane Perry, and more recently, keyboard-player Andrew Giddings and bassist Jonathan Noyce have brought their unique and valuable contributions to the line-up to join the ever-ready mainstay guitarist Martin Barre who, like Anderson himself, has provided the continuity and legacy of the earlier years.

With 60 million albums sold and over 2500 concerts played in 40 countries, the band continue to record and perform, typically 100 shows to around 300,000 people each year throughout all the major rock and roll territories of the world.

More tours and record releases are planned for 1999 and doubtless, hundreds of thousand of fans of all ages will thrill to the trill of flute, and twirl to the twang of string over humbucker. Critics will gripe and grumble, and contemporary radio will say, "Who? Thought they quit years ago to go fish-farming."

Still, what do they know? Well, go tell them.