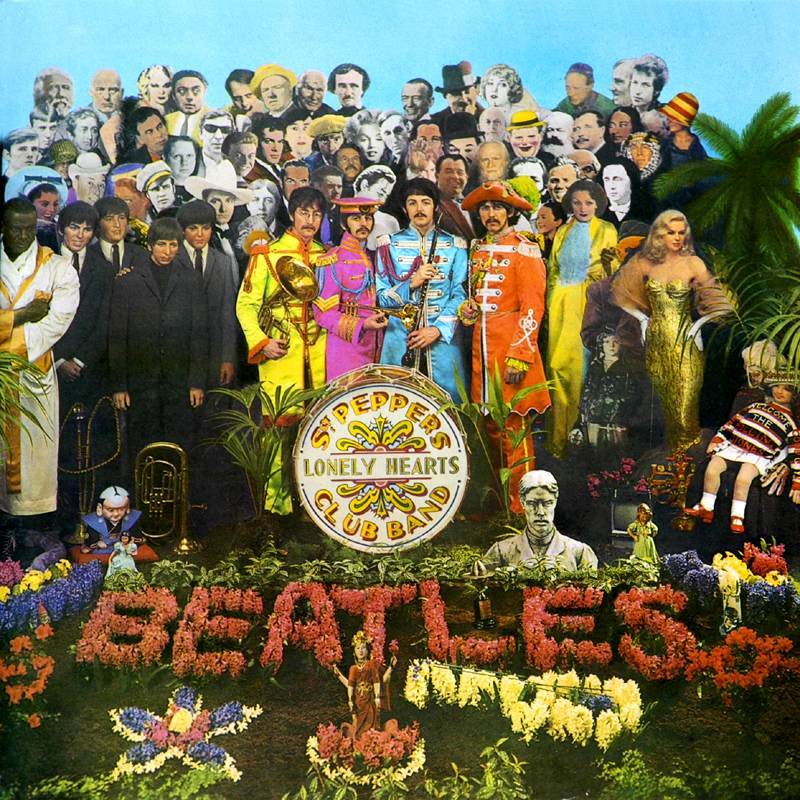 Where did progressive or symphonic rock start? To this question, many answers are possible. My answer would be: "with Sgt. Pepper". This album has become known as the very first concept album. Besides, The Beatles surprised everyone with the complexity of both compositions and sound.

The recording-sessions for this album started early November 1966, just after The Beatles announced that they wouldn't play live again. During the recording-sessions for Revolver the band had discovered that new techniques could stretch boundaries for them and that it wouldn't be possible to play their new compositions live. The first songs recorded for the album, Strawberry Fields and Penny Lane, didn't make it to the album, since the record-company wanted to release a single, because the fans hadn't heard from the band for almost a year. (Hey, Peter Gabriel, can you imagine?)

As a result these 2 songs were released as single before the release of Sgt. Pepper. Producer George Martin later called this "the biggest mistake of his life". In the CD era the songs would have been on the album as well, but this wasn't the case then.

Nevertheless these two songs were essential to the rest of the album because they set the standard for the other tracks. Both songs were youth-memories and both writers, McCartney (Penny Lane) and Lennon (Strawberry Fields), really made a big effort to make their won track better than the other. Lennon needed no less than 26 takes and 10 days for only one song. Anyone who knows "take one" knows how it developed in that time.

To the album now. In the title track, the Sgt. Pepper's Lonely Hearts Club band is presented to the audience. By doing this, The Beatles "escaped" from their image. Weird costumes and moustaches helped creating a different atmosphere.

This opening track is still one of my favourite Beatles-songs. The orchestra and the rhythm of the guitars form a unique powerful combination. A different (faster) version, recorded two months later, is the reprise on side two of the original album.

With A Little Help From My Friends follows. Ringo Starr (in his role of Billy Shears) sings this track and starts with asking us to forgive him for singing out of tune; a smart move! This song was later made number one in different version by Joe Cocker.

Next is Lucy In The Sky With Diamonds. This track was banned from the BBC, because it featured the capitals LSD. John Lennon explained that he was unconscious of this and that it was named after a drawing by his son Julian (for whom McCartney later wrote Hey Jude). Fact is that The Beatles experimented a lot with different drugs, which added to the psychedelic atmosphere of the album.

Getting Better is a typical result of the co-operation between the optimistic McCartney and the cynical Lennon. This song was recently used for a Philips commercial: "You've got to admit, it's getting better". Funnily enough, Philips left out the next line, John Lennon's cynical "it can't get no worse"...

Fixing A Hole was moved several times in the track-list and finally put on this prominent sport on the record. George Martin liked it because of the wonderful bass-line and his is completely right about that.

The Beatles, photo from the album cover

She's Leaving Home is another result of real co-operation between Lennon and McCartney. This is one of the very few tracks that wasn't orchestrated by George Martin. McCartney simple thought it took too long, so he asked someone else to do it. Lennon and McCartney both sing a part, only accompanied by the orchestra (isn't that symphonic?).

After John's Bye, Bye, side one originally ended, but Being For The Benefit Of Mr.Kite, was moved to this spot. Remarkably enough, the booklet of the CD suggest the listener to correct this with the help of the CD player. The track originally was the third song on the album. I think it suited better on that place.

Like Strawberry Fields, The Benefit... shows the creativeness of John Lennon. Inspired by a circus-poster he wrote this track about clowns, horses, wild animals etc. He originally wanted a real "steam organ" to accompany the song, but this was impossible. To create the same feeling, George Martin played the melody on a "normal" organ and added a lot of short bits and pieces from fairy-organs as background noise. The result is great!

The second side of the album starts with one of the strangest songs The Beatles have recorded. Some fans hate it, others think it's brilliant. It was something completely unusual in any case. George Harrison wrote this track, called Within You Without You, inspired by India, a country that, because of its spirituality, had caught the attention of The Beatles. The tabla and sitar that are used to play this song are authentic Indian instruments. Personally, I like this experiment, but it's a bit too long for me. It doesn't make a great start for the second side.

When I'm Sixty-Four and Lovely Rita were both added to the traclist at a later moment, instead of the aforementioned (single) tracks. Both songs are written by McCartney. When he wrote 64 he was about 16, so the song was recorded a bit faster, in order to make him sound a bit younger.

Like Lovely Rita, Good Morning, Good Morning (a Lennon compostion) was especially made interesting with the help of many sound effects. The sound of the rooster at the beginning and the hurdle of animals running from left to right on your stereo-version (there originally also was a slightly different mono-version) form a nice bridge to the faster reprise of Sgt. Pepper, immediately followed by A Day In The Life.

A Day In The Life is the result of a true co-operation between Lennon, McCartney, and Martin. The almost cynical tone of Lennon's remarks to the morning-paper, contrast with the optimistic part in which McCartney gets out of bed. Martin adds the climax, a bombastic, sweeping symphony orchestra that accompanies Lennon's "I love to turn you on" greatly. In my view, A Day In The Life, with all it's twists and turns including a bombastic symphony orchestra, set a standard for every symphonic rock song that has been made ever since. Writing and production of an album was never the same after Sgt. Pepper.