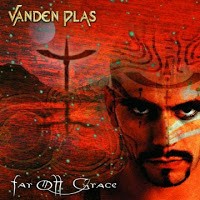 Here is a little story... Once upon a time, 15 years ago, DPRP was just a five-year-old web-sapling and I had just skidded through my third decade. Then one day a kindly doctor hovered over my hospital bed and uttered the dreaded C-word. A tumour, the size of fist, had staked its claim to the middle of my chest. The doctor kindly gave me a 50:50 chance of ever skidding through a fourth decade.

After a year's worth of chemotherapy and a weekly exposure of my chest to a kindly radio-therapy nurse, I was bald but bold. I made a list of 10 bands I wanted to see before I died - be that sooner or later. Within a year I was in remission and had travelled to Progpower USA, the south of Spain, Netherlands, Sweden Rock Festival, Paris and London and struck nine off that list (including the legendary ARK which I'd thought was being overly optimistic). One band however was proving problematic.

Vanden Plas had been on the bill for my trip to ProgPower USA, but pulled out due to safety concerns following 9/11. I had also travelled to see them in Paris, only to arrive to find a note saying they had had to cancel due to the sudden death of singer Andy Kuntz's father.

Undeterred, a year later I was back in Paris, to emotionally cross the final band name off my list. I cried a lot at the end of my mini-odyssey, especially during the already emotional Healing Tree, where Andy Kuntz dedicated the song to his father and apologised for not turning up the previous year, and the whole hall burst into a warm and lengthy round of applause in solidarity.

Thankfully I am now skidding through my fifth decade. With my wife I am working through a new list: 50 Great Walks To Do Before You Die. And when I do reach my Far Off Grace, this is one album I hope someone has put into the jukebox!